“Idlib Gadyushnik” and Afrin as a cruel lesson for Moscow and Damascus. Defense secrets of YPG and Erdogan’s vile plan 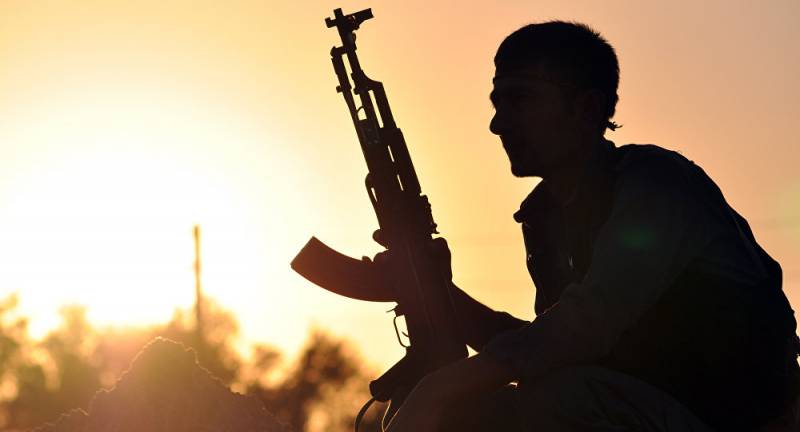 After completing lengthy preparations for a general attack on the strategically important territory in Aleppo province - the Kurdish canton of Afrin, the Turkish military leadership, together with the FSA, resorted to the favorite practice of genocide of the Kurdish population living in this small "enclave" of Rojava. In the evening of January 20, after several days of artillery preparation at the numerous strongholds of the Kurds in the border areas of the canton, tactical aviation The Turkish Air Force carried out a massive missile and air strike not only on dozens of YPG / YPJ strongholds located in the highlands of the canton, but also on residential areas of the densely populated city of Afrin, which in the very first hours led to 6 civilian casualties and 3 in circles YPG / YPJ fighters. As we noted earlier, this canton is considered by Ankara as a priority goal for only two reasons - due to the presence of Afrin in the tactical “cauldron”, which excludes the possibility of receiving military-technical support from the Kurdish YPG units in Manbij, as well as in connection with the acute the need to unite the "moderate" rebels in the Azaz region into a united front with the "Syrian Free Army" militants controlling the territories in Idlib governorate. The only obstacle for Turkey in the process of this unification is Afrin.

Official Moscow took a neutral position, which was expressed in a statement by Franz Klintsevich, the first deputy chairman of the Federation Council Committee on Defense and Security, who confirmed only the diplomatic vector of support for Damascus from the Russian Federation in terms of helping to prepare for Ankara to terminate Operation Olive Branch within UN. Also, the senator recalled that the Syrian-Turkish treaties absolutely do not provide for military support for Syria in a possible conflict with the Turkish army. What did we get in the end? Against the background of the threat of a collision with many times more powerful Turkish Armed Forces, without guarantees from our side, all the ominous warnings of the Deputy Foreign Minister of Syria, Feil Mikdad, about “intercepting Turkish fighters invading ATS airspace” turned out to be a natural bluff. 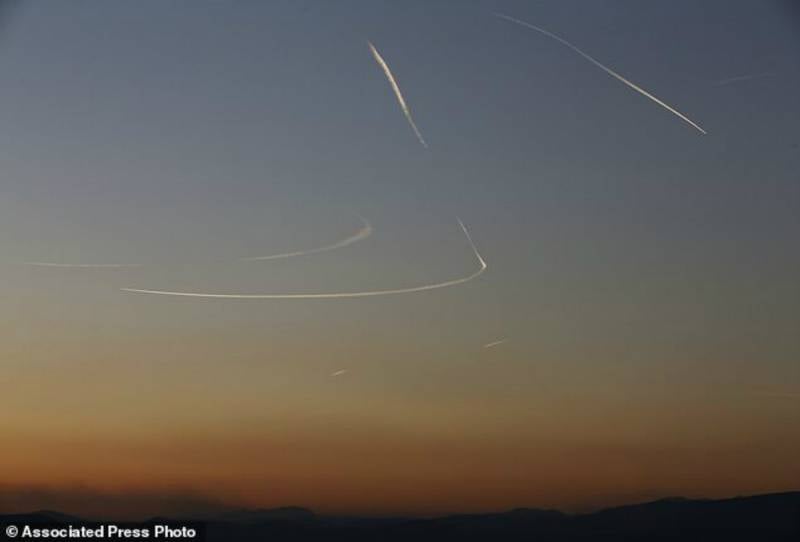 All this is clearly seen in a single photo (see above) posted on the Twitter page of the Conflict News community after the sunset of January 20 by an eyewitness from Afrin. It captures the western section of the airspace above Afrin Canton (in the direction of Hatay’s silt), in which at least 8 Turkish F-16C / D Block 50 / 50 + Turkish multipurpose fighters are patrolling. As can be seen from the presence of the inversion tracks, Turkish pilots circled over the western part of Afrin on altitudes from 6,5 to 8 km, without any fear of the work of the Buk-M2E and C-200А / В Syrian anti-aircraft missile systems, which could “ get such high-altitude targets even from the northern suburbs of Aleppo. Of course, the General Staff of the Turkish Armed Forces are not fools either, which is why a multifrequency multielement EW Koral multi-element complex (in Apkinar ila Hatay), which could partially disrupt the lighting process, was partially exposed to the probable flying direction of the Syrian anti-aircraft missiles 9М317 and 5Н62, which could partially disrupt the lighting process Koral »Semi-active radar seeker; but, unfortunately, not a single attempt to intercept followed. The location of the EPR Korral complex one day before the massive missile and air strike from the Turkish Air Force indicated the YPG and CAA to the most probable plane-and missile-hazard direction. At the same time, the difficult situation obviously forced Damascus to take a waiting position.

Also obvious is the fact that the complete inaction of the Syrian medium-range and long-range air defenses allowed Turkish fighters to operate at high altitudes without having to go into low-altitude mode, where they could be shot down by MANPADS at the disposal of the Kurdish Afghans.

The traditional obstinacy of the command of the Kurdish YPG troops also played a prominent role in the unfavorable development of events on the lands of the canton of Afrin. For example, according to information from the official member of the Executive Committee of the House of Democratic Society (“Movement of a Democratic Society”) Aldar Khalil, from the Russian and Syrian sides last week there was a proposal to include Kurdish troops in the Syrian Arab Army, but the YPG completely ignored it even against the background official Washington’s refusal to support Afrina. Recall that last week the representative of the headquarters of the operation “Inherent Resolve” in Iraq and Syria, Colonel of the American Army Ryan Dillon said that the military operation against the Kurds in the canton Afrin declared by the command of the Turkish Armed Forces of Turkey was not in the zone of responsibility of the coalition. In simpler language, the States simply abstracted from this conflict.

On the evening of January 21, after a long-term artillery preparation using 227-mm MLRS multiple launch rocket systems, Firtina self-propelled guns and missile and bomb strikes of F-16C / D fighters, the Turkish General Staff announced the start of the second phase of the operation, providing for a ground offensive throw using armored vehicles and the involvement of militants from the "Free Syrian Army". By noon, information was received about the capture of the small settlement of Shankal, located just 1 km from the Syrian-Turkish border by the pro-Turkish FSA formations (units of the Special Forces of the Turkish Armed Forces participated in the operation). Imagine only 1 captured village, given that on the side of the Turkish Armed Forces and the FSA groups there is almost a three-fold numerical superiority (34-35 thousand people against 10-12 thousand for the Kurds), multiple superiority in the number of armored vehicles and complete dominance in the technological aspect, including tactical means of territorial optical aerial reconnaissance, AWACS aircraft Boeing 737 AEW & C "Peace Eagle" (capable of conducting passive electronic reconnaissance), as well as network-centric communications and tactical information exchange. 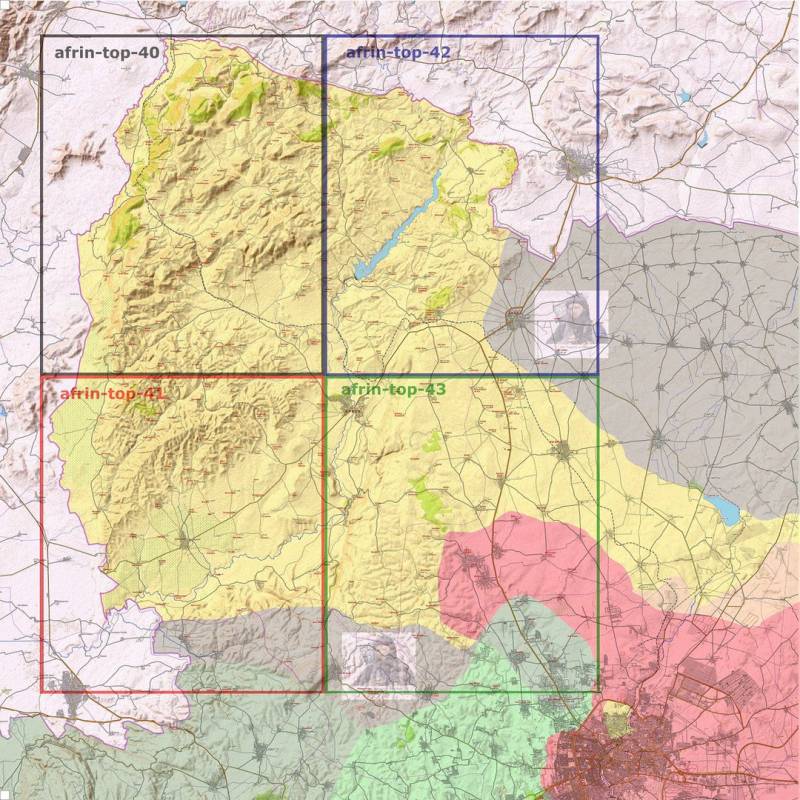 Here it’s all a matter of the tactics of building up fortified Kurdish YPG / YPJ detachments, elaborated to the smallest detail, the presence of an impressive number of Russian and western anti-tank missile systems, as well as thanks to playing into the hands of the difficult and elevated terrain in western and northern Afrin, full of hills, plateaus and elevations, which makes the offensive capabilities of the Turkish armed forces and the FSA detachments, even on local operational lines, ten times harder. By the evening, January 21, on the border with Hatay’s silt, pro-Turkish militants captured more 5 settlements - Adah Manli, Ali Bakki and Balal Kai, Bali Kai and Courney (they were captured by the YNG 3 fighter). In fact, this is all the achievements of Ankara in the ground phase of the offensive operation in the first 16-20 hours. At the same time, the Turkish army and FSA infantry and armored formations advanced no more than 3 - 5 km inland into the canton of Afrin.

Based on this, it can be concluded that in the course of further advancement, Turkish forces will face increasing resistance from Kurdish people's self-defense units, which have a developed infrastructure of strong points in the elevated terrain in northern Afrin, and therefore even without the support from Syria, the canton will be able to hold out from 5 days to one and a half - two weeks (and this is without support, which is being transferred to Afrin through the territory controlled by the Syrian army). As for the Turkish participating in the offensive tanks, then they are vulnerable to most anti-tank weapons armed with the Athenian YPG / YPJ. For example, the obsolete Leopard-2A4 MBT penetrates without difficulty into the upper frontal part of the hull (VLD), as well as the side armor plates of the hull and turret available to the Kurds at the Konkurs / -M complexes. If the Afrikaans YPG / YPJ have more advanced Kornet-E or TOW-2B complexes, where the main cumulative charges of the 9M133-1 and BGM-71F ATGMs have an armor penetration of 900 and 1200 mm, respectively, the Leopard-2A4 can be destroyed in the frontal armor plate of the tower. More “ancient” M60A1 / 3 can be hit by complexes 9K111 “Bassoon” and 9K115M “Metis” in absolutely any projection. The Turkish army also has the M60T Mk2 Sabra modifications modernized with the help of the Israeli IAI corporation MBT Patton.

The number of serviceable tanks of this modification in the NE of Turkey is close to 150-160 units. Their distinctive feature is the equipment of passive modular protection on the frontal armor plates of the turret and the sides of the turret, as well as the installation of dynamic protection modules on the mask of the MG120 XNUM-mm cannon (a constructive analogue is installed on the Israeli Merkava Mk253.). Indicators of the equivalent resistance of frontal armor plates of the M3T turret increased in comparison with M60A60 by about 1-1,8 times (from 2 to 260-470 mm), thanks to which the front of the tower is now perfectly protected from Fagot, the first modifications of the Metis. Even more protected is a mask of guns covered with elements of dynamic protection, the equivalent of which has increased from 520 to 354 - 600 mm, single-piece cumulative ATGM of type 650М9 "Competition" and 113М9 "Metis" are not able to penetrate it from the first time, while 115MXXXXXXXXXXXXXXXXXmXxXX M ”and 9М113-9“ Metis-M ”“ burns through ”it with particular ease. It is worth noting that the skill of the Kurdish anti-tankists was confirmed by the late evening of 115 in January, when the military officers from the canton reported on 2 disabled Turkish tanks involved in the offensive on several operational areas.

It is very likely that the Turkish army and the “moderate opposition” formations supported by it are completely bogged down in border battles with Kurdish self-defense units, and it would be extremely good if the offensive of the Turkish armed forces eventually drowned out due to the arrival of new armed defenders from various regions of the Syrian Arab Republic in Afrin, including the SDF-controlled Kamyshly and other cities of Rojava. Do not forget that Afrin, due to the impossibility of interaction with the cantons of Syrian Kurdistan controlled by Washington, can be maintained only thanks to the military-political will of Moscow and Damascus, and therefore it is these “players” who will be able to solve in their favor the situation with tricky tactical tricks supported Turkey FSA, "Dzhebhat an Nusra" and the IG.

In fact, the preservation of Afrin will allow the Syrian Arab Army to keep the pro-Turkish militants, rebels and terrorists of the IG and al-Qaida in Idlib in the “hedgehog”, driving a tactical “wedge” right along the line of the Kurdish canton. In this case, the perfectly armed detachments of YPG and YPJ will turn into a powerful barrier preventing the unification of the remnants of the idlib “Gadyushnik” with rebels from Azaz to the powerful “pale green” front of Erdogan. After all, the latter is able to translate the “game” into a completely unpredictable course, which is fundamentally different from that discussed during the recent visit of the head of the General Staff of the Turkish Armed Forces Hulusi Akar and the director of the national intelligence organization Hakan Fidan for a meeting with the First Deputy Minister of Defense of the Russian Federation Valery Gerasimov. We know the price according to Erdogan and other high-ranking officials of Turkey firsthand.

Ctrl Enter
Noticed oshЫbku Highlight text and press. Ctrl + Enter
We are
Rozhava - the land of the Soviets. How do Syrian Kurds fight and build a new world?Turkey against the Kurds. Is there a new phase of conflict ahead?
102 comments
Information
Dear reader, to leave comments on the publication, you must to register.