January 22 2018
69
The new war in the Donbas, the likelihood of which with the adoption of the Verkhovna Rada Reintegration of Donbass Act, has moved from the WNKer’s 80 percent to the 100, is not as easy to start as it seems to other commentators. Washington and his special representative Kurt Volker, a friend of Senator John McCain, are fueling the war as they can by supporting radical nationalist forces in Kiev, but the Ukrainian armed forces under the command of Chief of the General Staff, Viktor Poroshenko, will advance on the front. 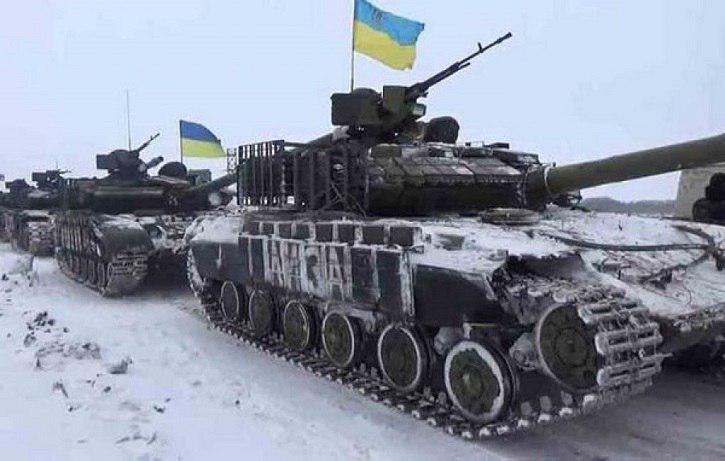 Other commentators say that the APU is so strong and has gained a lot of mind in the boilers that it will break the resistance of the buildings of the Armed Forces of New Russia, especially with the help of the American weapons. That's just the APU itself doubts this, and does not want to attack.

Recall that all fall 2017, the Americans tried to throw the APU in the attack on the Donbass, threatening otherwise with the Maidan "Saakashvili" in Kiev, but Defense Minister Poltorak and Chief of the General Staff Muzhenko, in fact, threatened Commander Poroshenko with their resignations. Muzhenko gave a press conference, where he expressed concern about the heavy losses in the event of an offensive, and hinted at a meeting with the president about this. Poltorak raised the question of disarming the Nazis or subordinating them to the Armed Forces of Ukraine, and rumors were circulating in the press about his resignation.

These resignations did not take place, but the Ukrainian Armed Forces did not launch a large-scale offensive, limiting themselves to artillery shelling and “toad jumps” in the gray zone on the front line, in which rumors were told that, first of all, neo-Nazi battalions were used up. Kurt Volker, who stopped Saakashvili’s Maidan for the sake of an offensive in the Donbass, was left with nothing, in fact, held him up like a boy.

Mockery in the form of a “toad offensive” prompted, apparently, Special Representative Volker to take the initiative to seize the Donbass with the help of “peacekeepers” under their roof, because the forceful seizure with the help of the Armed Forces of Ukraine failed. But the “peacemaking” seizure was blocked by Russia: Putin declared that he would not allow massacres in Donbass as in the Yugoslav Srebrenica, under the guise of supposedly “peacemakers”.

The failure of the idea of ​​a “peacekeeping” occupation of Donbass revives Washington’s plans for a military decision by adopting a law on war in order to force the Ukrainian Armed Forces to go on the offensive by lifting all formal constitutional restrictions on military actions in peacetime, which they cling to in the Ukrainian General Staff. It is not by chance that American advisers take part in the drafting of the law “on the reintegration of Donbass”. The law on "reintegration" allows, as it were, to legally unleash a war - all experts speak of this, the head of the DPR, Alexander Zakharchenko, called it the legislative foundation for a new war.

However, in matters of war and peace, any law that is airborne: wherever you turn, there will come out, there is not enough of a “law of war” to start a war. In order for the troops to go into battle, the Americans need to replace commanders who are unreliable, expressing concern about big losses, with those who will not be embarrassed by big losses.

In other words, after Poroshenko signs the law “on the reintegration of Donbass”, Washington will need to guarantee itself against the new “toad jumps” to change the leadership of the Ukrainian Supreme Court, Poltorak and Muzhenko, replacing the crazy reckless Nazis. To do this, you need to remove the commander in chief Poroshenko, because they are his proteges. Therefore, the requirements of the impeachment or the voluntary resignation of Poroshenko do not weaken, they are, in fact, joined by the collective West - the Atlantic Council of the USA, the IMF, the European Union and the European Parliament - with its supposedly “anti-corruption campaign”.

After Poroshenko signed the law on “reintegration” - the war, it becomes a hindrance for Washington and Kurt Volcker, so Ukraine can have another big event, a convenient occasion for which is the fourth anniversary of the February Maidan coup. Namely: the voluntary resignation or “people's impeachment” of Poroshenko, with the assignment of his duties, for example, to former Prime Minister Arseniy Yatsenyuk, a persistent Nordic nationalist who recently returned to Ukraine from the United States.

Following Poroshenko, resignations of Poltorak, Muzhenko and other insufficiently reliable officers of the Armed Forces of Ukraine are inevitable. In fact, it will be a new coup d'état, for everyone it will be obvious that the world press would lie about this, as well as its goal: to start a war in the Donbas, with possible provocations against the “aggressor country”. How will the APU, the General Staff, behave in the conditions of a new coup d'etat, understanding that they will be driven to slaughter in the Donbas?

If the US goes to power removal Poroshenko from power, a riot of the Armed Forces of Ukraine is possible. Issues of life and death greatly enhance mental abilities, and the commanders of the Armed Forces of Ukraine once again “win the victory of hydration” promises mass slaughter in the Donbass only because someone wants to spoil the presidential election of Vladimir Putin.

Any general or colonel of the Armed Forces of Ukraine may use this as a reason for rebellion. Such an uprising in the army will, of course, require a banner, and there are candidates for it, to take at least the hero of Ukraine Nadia Savchenko, who has become an opposition politician, a Rada deputy and expressing extraordinary views on solving the conflict in Donbas. For the initial success of the rebels, the military will only need to disarm the Nazi battalions, relations with which the APU has long hostile.