In the wake of the tragedies in Perm and Ulan-Ude. Shooters have already found?

January 22 2018
112
The year that began on 2018 shook the public with resonant attacks in Russian schools - in Perm (January 15) and Ulan-Ude (January 19). And in one, and in another case, the suspects are either current or former students of the very schools in which the massacre was arranged. Fortunately, there are no dead. Unfortunately - there are wounded, and hard. Among the wounded are teachers and pupils of primary classes. So, the 13-year-old student from the Ulan-Ude school is in a coma, the teacher from Perm Natalia Shagulina received 17 knife wounds and at the moment her condition is estimated as “moderate”.


There is no longer any need to go into all the details of what happened, since, among other things, on the pages of our information and analytical resource, what happened was described in sufficient detail (as far as Roskomnadzor allows) in news summaries. I will cite just a few testimonies of eyewitnesses and those directly affected - for, so to speak, an attempt to feel the situation “from the inside”.

In an interview with the information service Life news Irina Ramenskaya, the Russian language teacher of school No. 5, Ulan-Ude, told the following (about the events of January 19):
I led a lesson, the door opened, something threw. They hit me in the head, I did not even feel the blow. The smoke has gone. I began to withdraw students. When she jumped out, she saw that the man was just chopping down children with an ax. I returned them to the office again - everything was burning there. ... I was already bleeding. 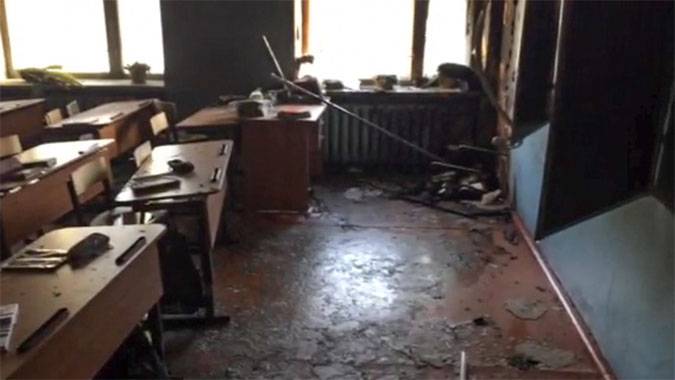 From the statement of the Deputy Prime Minister of the Republic of Buryatia, Peter Mordovsky (quote "Baikal Daily"):
The suspect is already testifying that he has entered the school. He is a student of this educational institution, and he carried a container with a flammable liquid, opened the class and threw it (capacity, - author's note) there. And when the teacher and the students began to evacuate from the classroom, he chopped wounds with an ax. Currently 6 students are hospitalized and the seventh is a detainee who caused himself a knife wound and injured his leg when falling from a school window. No other facts about the fact that this was a group attack, that there were several attackers, we do not know.

At the moment, law enforcement officers find out all the details of what happened in the Perm region and the Republic of Buryatia. There is a prosecutor's office, investigative bodies, departments of education of the subjects of the federation, and so on, among others, among the many controlling bodies. And we don’t have to say how many of these control bodies we have in our country ...

What does this kind of work come down to? Perhaps, in finding the root of the problem of growing aggression in the teenage (and not only) environment? Perhaps, in building a new system that would finally tell the general public about what final “product” the domestic system of upbringing and education forms? Yeah ... Schazz ...

According to the established “tradition”, all this work comes down to one thing - to quickly launch towards the authorities of the controlling organizations a multi-page report in which the “switchmen” will be unequivocally called. In turn, the “satisfied” reports of the authorities will redirect the reports to their heads, and the results of the investigation will be posted in the media as evidence of the work done by the departments - “painstakingly” done, aha-aha ...

The fact that such work actually means is well-known. In addition to those who are faced with the rage of the raging Perm and Buryat teenagers, the pedagogical collectives of the very schools that were attacked (schools) were frankly sorry (indeed sorry). And the very scapegoats mentioned above will definitely be found “on the ground”. Controlling "comrades" will pereryut all the reporting documentation of educational institutions in the hope of not finding a report on the educational work of the average teacher for the "un" period, the contract on hiring security services, etc. And even if all the reports for all the periods of interest are presented to the inspection commissions, there is an “experienced checker” in the piles of papers that are literally inundated with modern educational institutions across the country that do not detect any lighting instructions or any of the series “ Safety guidelines for attacking a school using a Molotov cocktail. "

Say - a stupid and inappropriate irony in this situation. Perhaps we should agree.

But people who are directly connected with the modern education system, in fact, understand what is at stake. The pedagogical staff is literally chained into endless demands for the timeliness of filing reports - literally for any reason (and if there is no reason, but there is a desire for the examiner, then no reason). Classrooms are transformed from places where you need to sow the most sensible, good, eternal, where you need to conduct a direct dialogue with students, into hubs of waste paper from ridiculous plans, instructions, statements, jurisdictions and other things. Any inspection commission checks first of all which activity? - That's right, paper-making. The fact that a teacher, not only for his modest salary, has to spend much more time on paper than students (not to mention his own family, you can forget about it ...) doesn't bother anyone "above" . There is a paper - "live" on. There is no paper - “oh, you, inefficient biomass with a teacher’s diploma!” “Oh, you backward uncreative adept of the rotten and mossy of the Soviet system!” “Oh, you sneaky hater of innovations!” - it means, because of you, the “schooter” that was smoked and sniffed by anyone who was not noticed with an ax, knife and Molotov cocktail went up to the third floor of the school. But there would be a schedule of lighting and volume of reports on student-centered educational work with the “school doctor” for all his training from young nails, maybe you would have been lucky, worm ... You say there are such reports? - Oh, you are so-and-so, you want to transfer all the arrows of responsibility to the higher management, to (oh, horror!) Sovereign servants, who day and night think about how to make our education even better? !!

But after all, by and large, a teacher in a modern school is not at all ready for the challenges that one has to face. Well, they do not teach in pedagogical universities to devote more time to papers than to children. Do not teach ...

An important testimony of the parents of students of the school №5 in Ulan-Ude:
Through messengers, children were sent messages telling them not to go to school that day. It was written like this: "Do not go to school - there will be meat."

And here there is a clue from the inspection authorities: school teachers did not keep up with the newsletter, did not monitor the mountain of pages on social networks, did not report to whom and where necessary. So - guilty! ..

Here you need to inform readers that monitoring social networks today also rests on the shoulders of the teacher. Yes Yes. And this too.

Authorities require a weekly report that someone from the schoolchildren doesn’t like or “repost” something.

In other words, in social networks it can easily be “something is not right”, and who is responsible for this is, to put it mildly, not quite clear. But if the TEACHER did not follow the likes and reposts, then the switchman is again obvious. Well, of course, it is he himself - that same ordinary teacher - who else. After all, in addition to filling in quintals of papers, he also needs to control what children are writing on social networks, what informational activity is shown in messengers. Gain for it to wages? - And here it is not (at least, not always and not for everyone), because for some time educational and law enforcement officials began to believe that even the monitoring of students' activity in instant messengers and social networks is also "included in the rate" of the average teacher. Optimization, and how you wanted ...

And this is the revelation of the father of one of the attackers:
I left the family ten years ago. Initially met with his son. But 4 a year ago, the ex-wife finally forbade me to see him. I initially tried to contact him. But then the son somehow ceased to make contact. And that's all - we never saw each other again.

Of course, it can be assumed that the fault here for the fact that the ex-wife forbade the ex-husband to meet with their common child may be addressed to the pedagogical community - they didn’t see, you know, they didn’t follow, they didn’t go in deep contact with relatives ...
But is not this the revelation of the father of a teenager - a signal that the root of the problem lies much deeper than the mere turmoil and nonsense in the modern education system. Want marriage and divorce statistics for 2017 a year? - 829 couples divorced 1000 registered marriages in the national average. And there are seven regions where the number of divorces and completely surpassed the number of marriages. These are the Leningrad, Kirov, Bryansk, Vladimir regions, the Republic of Komi and Kalmykia, and the Altai Territory. For example, in the Leningrad region on 1000 marriages in 2017, there were 1119 divorces. It is hardly possible to assume that such a number of divorces in a country has a particularly positive effect on the upbringing of modern youth. Children of “runaway” parents often remain left to themselves even against the background of psychological trauma, when a child is not just hard to perceive living separately father and mother, but even harder to perceive when one of his parents is forbidden to see him. Where to look for opportunities to throw out emotions? - yes anywhere. Someone goes to the sports section or finds an outlet in the artistic environment. And someone is attracted by pseudo-political shows or the "romance" of crime, which some characters just want to demonstrate to their peers. He took an ax in his hands, marked “his real toughness” on the Internet, bought more salts, spices and other rubbish for parental money that was readily available on the Web, and went “to assert itself”. Others decided to turn themselves (at the call of Facebook) into zooplankton on the marches of "dissenters."

So, of course, they will write a piece of paper; scapegoats will find; in the media about the work done will report. And then what? Again a piece of paper, again a report, again a press release about the effectiveness of work bordering on genius? ..

Perhaps in the 100 time from the stands we will all hear about how to properly fight for family values. Well, this in Europe is homosexuals and juvenile justice, but in our country everything is great - the values ​​are protected in full ...

Author:
Alexei Volodin
Photos used:
Investigation Department of the Investigative Committee of the Russian Federation in the Republic of Buryatia

Ctrl Enter
Noticed oshЫbku Highlight text and press. Ctrl + Enter
We are
Situational analysis of the death of the MH17 flight (Malaysian Boeing 777), made on the basis of engineering analysis from 15.08.2014Reports from the militia of New Russia for 27-28 September 2014 of the year
112 comments
Information
Dear reader, to leave comments on the publication, you must to register.