Vlad Lobayev's rifle: the farthest shot in the world

January 20 2018
41
This история It began almost three years ago when Russian shooter and high-precision long-range rifle manufacturer Vlad Lobaev saw a video on YouTube where peppy old people from Texas rifled at a target at a distance of 3600 yards (3292 m). Vlad decided to accept the challenge and compete with the Americans. Fortunately, he had at hand his own armory Lobaev Arms factory.


The Americans fired from a custom-made (custom) ultra-long-rifle of a rare .375 CheyTac caliber. By that time, Lobayeva Company had already commercially produced the SVLC-14 “Dusk” super-long-range rifle in an even rarer and more powerful .408 CheyTac caliber, which allows sniper shooting at distances over 2 km. For the record, they took a special custom “Dusk” with a titanium chassis and a drummer, with a barrel length of 720 mm and a weight over 9 kg. In April, the 2015 year on the field in the Kaluga region (many kilometers of shooting ranges in Russia is not there) from this rifle Lobaeva team after sighting shots hit the target at a distance of 3400 m. The video with a record was posted on YouTube. The Americans reacted calmly: they say, okay, let's continue the correspondence duel.

Not only the Americans reacted: after a long training session, the French sniper from the Foreign Legion hit the target at a distance of 3600 m, but, apart from an article in a small specialized journal, there was no information about this record, no one posted it. The Americans, too, overcame the mark first 3600, and then 4000 yards (3657 m). This video was studied in the company of Lobayev almost under a microscope: some parameters of the shot did not coincide, the approach time did not dock with the initial speed and angle of inclination of the bar. In ballistics, nothing has changed, and a few hundred meters increased. This does not happen, but since the competition was originally conceived as a contest of gentlemen, the Lobayevts decided to continue to shoot with the Americans honestly. And win by knockout - to get from four kilometers.

Shooting at shooters is considered to be ultra-long distance shooting, where at the end of the trajectory the bullet goes deep on the dialup, because with supersound everything is clear - there ballistics are considered easy, by simple mathematical methods. A subsonic ballistics and is considered more difficult, and, most unpleasantly, in this mode, there are some physical processes that make it difficult to shoot at very long distances. First, there is the effect of re-stabilization. Linear speed slows down by 1000 m, say, three times - from 900 m / s to 300 m / s. And the bullet rotational speed is just 5 − 10%. On dialing, the speed is even lower, and the rotational speed is still the same. This leads to the fact that all structural and manufacturing defects of the bullet begin to emerge, which greatly influences dispersion. In addition, at low speeds, errors in evaluating wind and meteorological conditions become noticeable. The second factor is the turbulence in the bottom part in deep dialing. At speeds slightly less than 300 m / s, this is not critical, but at distances of more than 2 km it greatly affects accuracy. It is possible to fight with these phenomena in only one way - to develop a design of bullets with a different design of the bottom part. 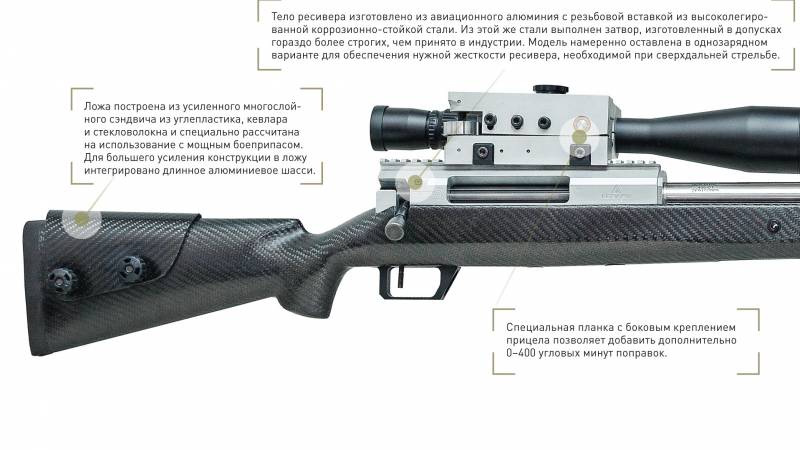 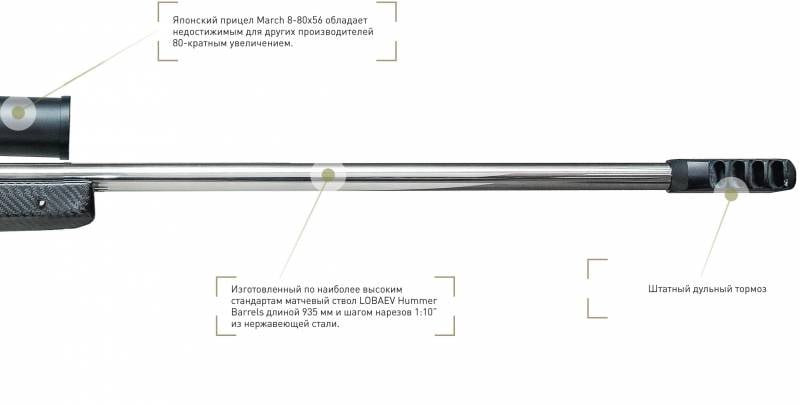 Classic problems for firing at very long distances require an increase in bullet weight and more advanced aerodynamics. Lobaev set his first record as a standard D27 bullet, an analogue of the widely known Lost River in the West. These are elongated, one-piece bullets for firing at long distances, which are also called Ultra VLD. For new records, they were no longer suitable. If you go along the path of increasing the mass of the bullet, you will need to change the entire cartridge - either increase the chamber or use new progressively burning gunpowder, or even switch to a different caliber. Another caliber (Browning .50 or domestic 12,7 x 108 mm) is a transition to another class and a completely different weapon with all the ensuing consequences: other barrels, bolts, barrels, dimensions, weight and a significant increase in return, which gives you pleasure from firing speech is no longer at all.

Lobayev decided not to retreat from the old liner and caliber .408 CheyTac, not to change either the size or weight of the weapon. He was able to develop a heavier D30 XNUM gram while remaining within the standard cartridge. This was also done because the cartridge is quite accessible and anyone can try to repeat the achievement. The design of the bullet was also modified: it began to resemble a long, elongated spindle with two pointed ends, which made it possible to achieve an almost perfect ballistic coefficient of one. This required a change in the design of the rifle, a faster rifling pitch, in order to stabilize a longer and heavier bullet. If the classic rifling pitch in the 30 caliber is thirteen, then at the record rifle Lobaev decided to use the top ten. Despite the fact that the initial speed of the new bullet was lower (408 m / s in D875 versus 30 m / s in D935), it had a more flat trajectory on 27 km. 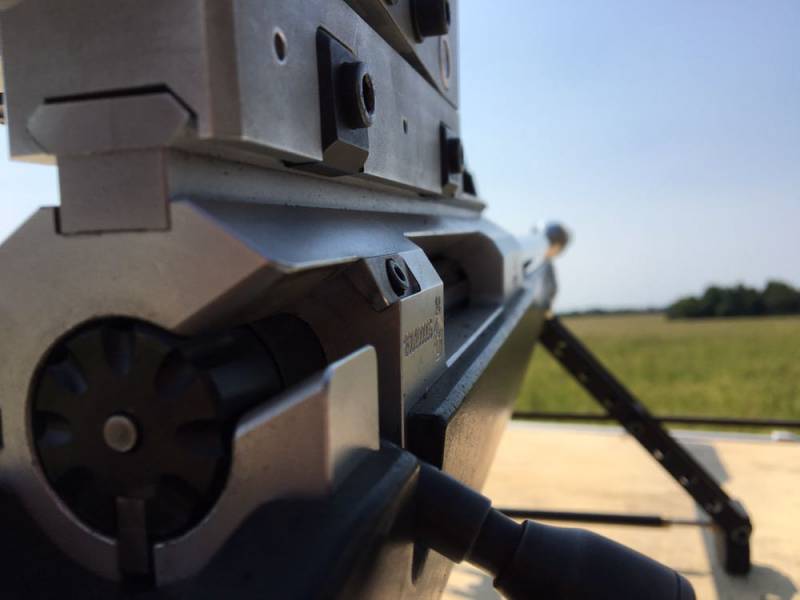 One of the main problems with record shooting is that you can not endlessly raise the bar of an optical sight. When firing at such distances, the rifle has large elevation angles, like when shooting a canopy, almost like a howitzer. At the top of the trajectory the bullet goes at a height of several hundred meters. No sights allow you to make such corrections for aiming, therefore for record shooting use special slats for the sight. However, it is impossible to raise the bar endlessly: the muzzle device begins to block the line of sight. This just confused Lobayeva in the last record of the Americans: the angle of inclination of the bar did not correspond to the amendment necessary for such a distance. The solution to this problem Lobaev spied on the artillery, where the scope has long been rendered to the left of the barrel. The solution is simple, but no one in the world before Lobaev has been applied. If you look closely at the photo, you can see that the sight on Lobaev's record rifles passes to the left of the barrel. What turned out to be more convenient for shooting: you do not need to throw your head and you can take the optimal position. 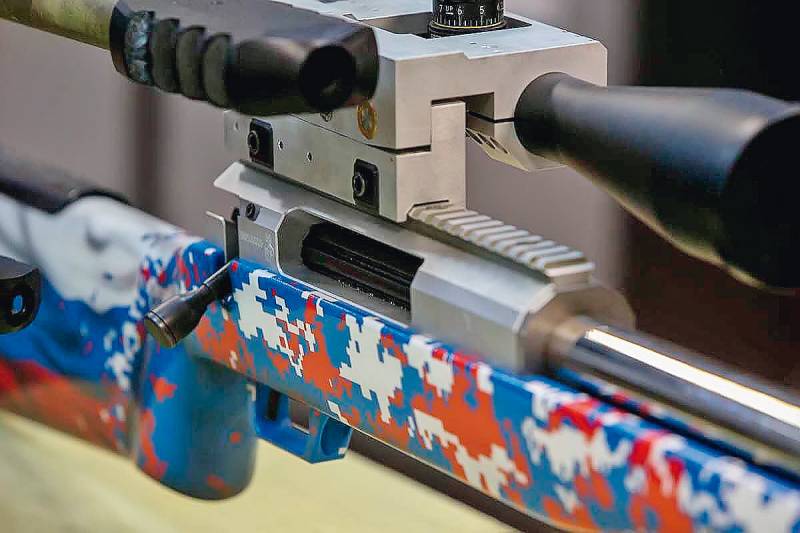 Know-how Lobaeva - side mount sight for ultra-long range shooting. A year ago, it was even forbidden to photograph him. This system can also be used in the army: when firing over long distances, it helps to manage with affordable Russian sights.

They were going to break the record last summer in the fields near Krasnodar. For this, a giant target with a size of 10 x 10 m was manufactured to at least aim. How a bullet behaves at such distances, no one knew, and indeed no exact mathematical models existed. It was only clear that the bullets would enter the ground near the target almost vertically, so the target was at a large angle. The difficulty was that the soil was wet during firing, so it was necessary to hit the target exactly: the traces of falling into the ground at such low speeds and almost vertical angles are not visible. Unfortunately for the whole team, from the first time the record did not succumb: it was not possible to hit even such a large target. While preparing for the next round, the Americans posted a video with a record for 4 km. It became clear that you need to shoot even further.

Over the past year, Lobaev and his team conjured a rifle and new bullets, almost without giving out information about the project, fearing to jinx the world record, constantly approaching the cherished milestone, first taking 4170 m, then 4200. And in October of this year, they managed to do something incredible: the well-known shooter and promoter Andrei Ryabinsky hit a target the size of 1 x 1 m from a distance of 4210 m. For such a shot it was necessary to take into account a huge number of factors, including the rotation of the Earth, the 13 with ! As the record holder himself said, he walked to this shot for eight years. So now the ball is on American territory. Or rather, a bullet.

Ctrl Enter
Noticed oshЫbku Highlight text and press. Ctrl + Enter
We are
Lobaev Corporation and its precision riflesSVLC-14С rifle: records and prospects
41 comment
Information
Dear reader, to leave comments on the publication, you must to register.