Poland plans to create a new mechanized division near the borders of Belarus. Fourth in a row 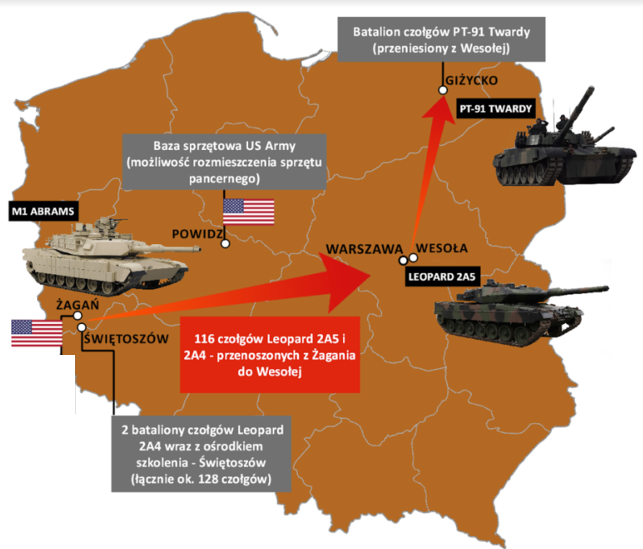 The militarization of eastern Poland is reaching a new level - Warsaw is planning to create a new mechanized division - the fourth one of the kind in the Polish army. At the same time, from the hands of the already former Minister of National Defense of Poland, Antoni Matserevich, all these measures are called “strengthening the country's eastern flank from outside threat”.

It is possible that part of the forces and resources allocated to increase the number of the Polish Army to two hundred thousand people, can be directed to a new division.

Polish military experts, justifying the need to create a new division, cite as evidence the fact that only one 1st is located near Warsaw tank brigade of the 16th mechanized division, whose forces are not enough to repel "Russian aggression". In addition, they indicate a very disadvantageous deployment of units and formations, when the brigades and regiments of two of the three divisions (11th and 12th) are located in the west of the country, and the remaining 16th is located along the border with the Kaliningrad region. It is not surprising that the Poles decided to form a new division and thereby at least triple the number of combined arms and tank brigades supposed to be deployed along the borders with Belarus.

That's just with the number and name of the new connection, you may have some problems. Most logical for the Poles would be to revive the 1-th mechanized division, the benefit of almost the entire infrastructure of its units and military units was preserved. True, there is one thing - it was formed in October 1943, not without the help of the Soviet Union, with the "bloody" legacy of which Warsaw has been actively fighting in recent years.

The first sign, in essence, to launch the revival of the 1-th mechanized division, was the arrival of Leopard tanks in the 1-Tank Brigade in Vesola, the only surviving carrier of the traditions of the Tadeush Kostyushko formation. The possible withdrawal of her from the 16-th division should not undermine the combat readiness of the compound, in which there will be three more brigades.

The next in line is the creation of the 1 artillery regiment in Ciechanów, which can be supplied with the latest weapons, including the Crab self-propelled howitzer division and advanced Khomar multiple launch rocket systems. Especially since the warehouses located there and on the balance sheet of the Polish Ministry of Defense are already capable of locating more than 200 units of military equipment, which is more than enough for an artillery regiment. And with the deployment of personnel of the newly reconstituted military unit, there will also be no problems, since the barracks fund in Ciechanów has been significantly updated for the so far failed reception of American military contingents.

The headquarters of the new division along with military units and support units may be deployed in Legenovo (north of Warsaw). But the formation of an air defense regiment is seen at the expense of the liberated equipment and personnel of the 3 th anti-aircraft missile brigade (Sochaczew), which is soon being reequipped with the Patriot air defense system. In addition, the option of equipping one of the divisions of a newly formed military unit with the latest Poprad air defense system is not excluded.

In order for the newly created division to meet the standards adopted by the Polish Army, the General Staff plans to deploy two more mechanized brigades. And one of them, presumably 3-I mbr, can be deployed in Lublin. But this will be a full-fledged combined-arms unit, and not that “burp” of political agreements, which is called “LitPolUkrbrig”, the Polish battalion of which is located there. Moreover, Polish commanders plan to transfer one battalion of "Leopards" from the 10 armored brigade of the 11 division after they are upgraded to the level of 2А4PL, to the 3 of the mechanized brigade. Regarding another brigade, one can only say that the city of Siedlce can become a hypothetical place of its deployment, as the infrastructure necessary to accommodate such a large military formation is still there.

In the light of the evolving situation, a legitimate question arises - is it not a lot of forces to defend the eastern flank of Poland? We recall the classic 1: 3 ratio (this is when one military unit can repel the offensive of three similar enemy units), and everything immediately falls into place. Crafted by the Poles, is not going to defend such a mass of troops near the borders of Belarus. But for offensive operations along the Brest - Minsk route, forces will already be enough.

By the way, we should not forget about the brave American warriors, whose deployed brigade is located on the territory of Poland in the cities of Zagan, Sventoshuv, Boleslawiec and Skwierzyna, making up, in fact, the second shock echelon.

Ctrl Enter
Noticed oshЫbku Highlight text and press. Ctrl + Enter
We are
A great interview with Sergey Lavrov: about Ukraine, Obama and IranWhat you didn't want to know about England
25 comments
Information
Dear reader, to leave comments on the publication, you must to register.