January 19 2018
50
In the United States started running trials of one of the largest ships of the US Navy. According to the portal navaltoday.com, the newest USS Hershel expeditionary naval base "Woody" Williams ESB4 first went to sea for testing. 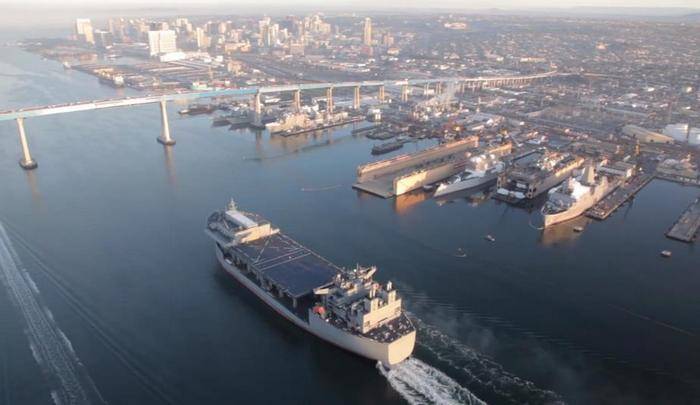 In their course, the acceptance team of General Dynamics NASSCO and the acceptance team of the US Navy will test the operation of the main systems of the ship, as well as its driving performance. In case of successful passage of the tests, the ship will be adopted by the American fleet and “make up the company” to the USNS Lewis B. Puller Expedition Base (ESB3).

USS Lewis B. Puller and USNS Hershel "Woody" Williams (ESB 4) are the largest non-nuclear ships in the US Navy. The total displacement of each forwarding naval base is 78 000 t, in this parameter they lose only to nuclear aircraft carriers of the Nimitz and Gerald R. Ford types, whose displacement is about 100 000 t. The length of Hershel "Woody" Williams reaches 233 m, the maximum width is 50 m The ship is equipped with a flight deck, which can accommodate four heavy helicopters CH-53, and is able to take on board four anti-mine unmanned boats Mk 105. In addition, the ship is a helicopter hangar, warehouses for storage of ammunition, fuel, equipment, consumables and components, reports "Warspot"
Ctrl Enter
Noticed oshЫbku Highlight text and press. Ctrl + Enter
We are
In the US, "christened" the second expeditionary base shipThe US Navy included the USNS Lewis B. Puller Expeditionary Marine Base (T-ESB-3)
50 comments
Information
Dear reader, to leave comments on the publication, you must to register.