The Ministry of Defense expands the functionality of the Engineering Forces

January 19 2018
21
The Defense Ministry is pursuing a reform of the Engineering Forces - they will become a powerful striking force designed to wage a modern war, according to News. 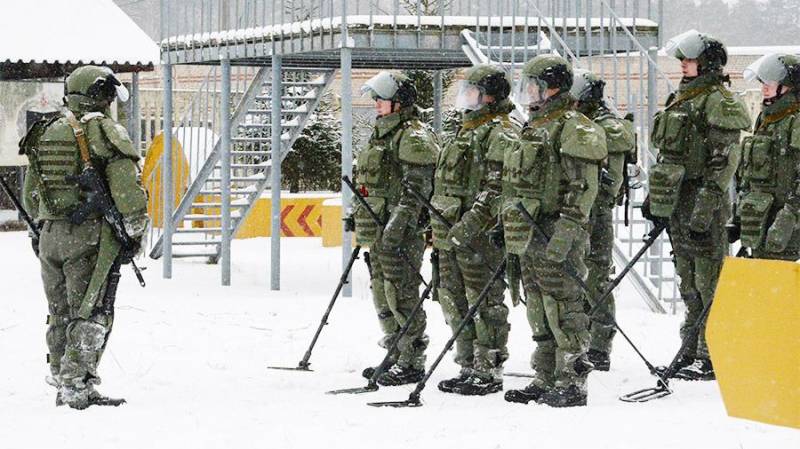 In the near future, “fundamentally new engineering and sapper units will appear in all armies, which will be optimized to meet the challenges of storming and fencing, demining advanced, covert mining,” the newspaper writes with reference to the military department.

They will include assault companies, units of special forces sappers, companies of robotic complexes and UAVs.

The first regiment of the new state will be formed this year and will become part of the 8-th combined-arms army.

It is reported that in the course of the reform, the number of road-bridge building and pontoon units will be reduced, but attack aircraft and sapper special forces will appear.

According to military expert Oleg Zheltonozhko, “increased attention to the engineering troops is absolutely justified, since well-trained and equipped engineering and engineer units are very important in the context of modern wars.”

The fighting in Syria showed that sapper units are in great demand in local wars. They must work directly on the front lines and in close cooperation with the general military units. This interaction is especially important in urban environments,
an expert told the newspaper.

He noted that the Second World War also showed that special assault units were needed to capture cities and fortified areas, which "must use not only standard infantry weapons, but also explosives in order to neutralize enemy pillboxes or pierce the passage through the building."

In modern conflicts, various explosive devices and mines are widely used. In order for the troops to operate freely, demining specialists must go with them. Traditional tasks, however, also have not gone away. Suffice it to recall the recent forcing of the Euphrates, for which it was necessary to quickly bring the crossing,
added Zheltonozhko.

Ctrl Enter
Noticed oshЫbku Highlight text and press. Ctrl + Enter
We are
Reports from the militia of New Russia for 13-14 September 2014 of the year
21 comment
Information
Dear reader, to leave comments on the publication, you must to register.