The air defense of the Ground Forces of Russia will receive new modifications of the C-300В anti-aircraft missile system. 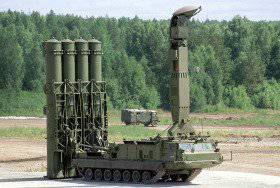 The military air defense of the Russian Land Forces will be equipped this year with the latest, in a row, modification of the C-300B anti-aircraft missile system. The official representative of the Ground Forces, Colonel Sergei Vlasov, informed ITAR-TASS today.

"In the course of the development of the weapons system of the Air Defense Forces of the Ground Forces this year, it is planned to complete the modernization of the C-300В system to the C-300B4 level," he said.
“The range of their firing with heavy missiles exceeds 300 km,” added Vlasov.

At the end of March, he recalled, tactical maneuvers of an anti-aircraft missile brigade from Naro-Fominsk were held at the Kapustin Yar range in the Astrakhan region. During combat firing, the upgraded C-300В anti-aircraft missile systems confirmed their high performance, hitting air targets.

The C-300B ("Troop"), unlike the conventional medium-range missile system, the C-300 is a separate development for the Ground Forces of the Russian Federation and has a launcher on a tracked chassis. One of the important differences between the C-300В and the "parallel" system is the presence of not one, but two types of anti-aircraft guided missiles. One is used to hit aerodynamic targets at a distance of up to 75 km. Another ground-to-ground class can hit ballistic targets as well as aircraft of all types at speeds up to 3000 m / s at a distance of up to 100 km.