January 19 2018
21
The story of the most powerful rifle weapons it would be hard to imagine without a machine gun. The large-caliber 12,7 mm Russian-made Kord machine gun is today one of the most powerful “arguments” of Russian infantry on the battlefield. This weapon allows you to effectively hit enemy infantry and equipment, including lightly armored. The expression "machine gunner’s dream" can be safely applied to this development of domestic gunsmiths.


"Kord" is a Russian heavy machine gun chambered for 12,7x108 mm with a tape feed. The name is an abbreviation of the initial letters of the phrase "Kovrov gunsmiths-Degtyaryovtsy." The main purpose of the machine gun is to fight against lightly armored ground targets, vehicles, enemy manpower (group targets) at a distance of up to 1500-2000 meters, and also fight against various low-flying air targets at inclined ranges to 1500 meters.

The large-caliber Russian machine gun Kord was developed in the 1990s as a replacement for the Soviet 12,7-mm large-caliber machine gun NSV Utes, the production of which, after the collapse of the Soviet Union, was partially outside the Russian Federation. The machine gun was created by the designers of the Kovrov plant named after Degtyarev (the famous ZID). Serial production of new weapons was launched at the Kovrov plant in 2001. Currently, the machine gun is officially adopted by the Armed Forces of Russia. For the Ministry of Defense of the Russian Federation, this large-caliber machine gun is produced in the infantry version with bipods (the lightest model) and on a special tripod machine, there are also special versions of the machine gun for installation on automobile and armored vehicles (Cord is used in anti-aircraft installations on the turret tank T-90), as well as boats and helicopters. 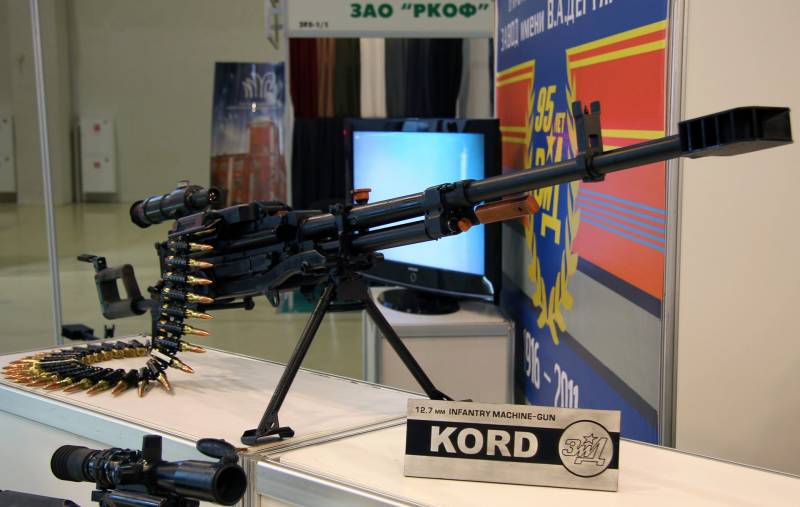 A. Namitulin, N. M. Obidin, Yu. M. Bogdanov and V. I. Zhirokhin were engaged in work on the new machine gun, which was to come to replace NSV, in the SKB of the Kovrov plant named after Degtyaryov in 1990-ies. Created by these specialists, the Kord heavy machine gun received a new barrel with an effective muzzle brake-flame arrester and a modernized locking system. Of the features of the new Russian weapons, we can highlight the fact that this is the only large-caliber machine gun that allows firing not only from the machine, but also from the bipod. In this case, the mass of the machine gun in this version does not exceed 32,6 kg (without sight and spare parts). Among its large-caliber counterparts from around the world, the Russian Kord machine gun stands out favorably with its low weight, the body weight of the machine gun of the entire 25 kg. The maximum length of the machine gun is 1980 mm. The machine gun Kord is lighter, more accurate and more compact than its predecessor.

When creating a new large-caliber machine gun chambered for 12,7x108 mm, Kovrov’s gunsmiths tried to eliminate three of the most important problems that were revealed during the operation of the heavy-bore machine gun NSV “Utes” in the troops:

- reducing recoil energy and increasing the stability of the machine gun when firing, the solution to this problem and allowed to create an infantry version of a large-caliber machine gun Kord, which can be used together with bipods;
- ensuring the process of independence of actions of automation and mechanisms of the barrel of a machine gun, which has a positive effect on the characteristics of shooting accuracy, and also eliminates various resonant oscillations of the weapon;
- significantly increase the survivability of the machine-gun barrel, thanks to this, Kord could be staffed with only one barrel. According to the manufacturer’s official website, the technical resource of the Kord machine gun was brought to 10 000 shots. 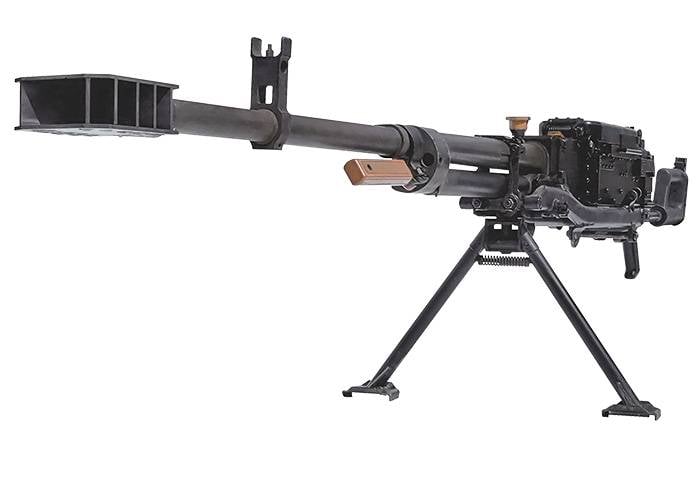 The trigger mechanism of a large-caliber machine gun Kord can be controlled both manually (from the trigger mounted on the machine) and from electric trigger (option for a tank machine gun). USM has a fuse against making random shots. As the main one for firing a machine gun, an open adjustable sight with a cut-off to 2000 meters is used, while it is possible to mount various modern optical and night sights on the weapon.

The barrel of the Kord machine gun is quick-detachable, the cooling of the barrel is airborne. It was created using proprietary ZID technology, which ensures that during the firing of the machine gun its uniform heating, and hence even thermal expansion (deformation) of the barrel. Due to this technology, the new Russian machine gun has a very good shooting accuracy, which is 1,5-2 times the performance of the NSV machine gun. Firing from the machine is compared (when firing from the Kord from the bipods, accuracy is comparable to NSV on the machine). When shooting at a distance of 100 meters, the circular permissible deviation (KVO) for Kord amounts to only 0,22 meters, which is a little for small arms of this class. 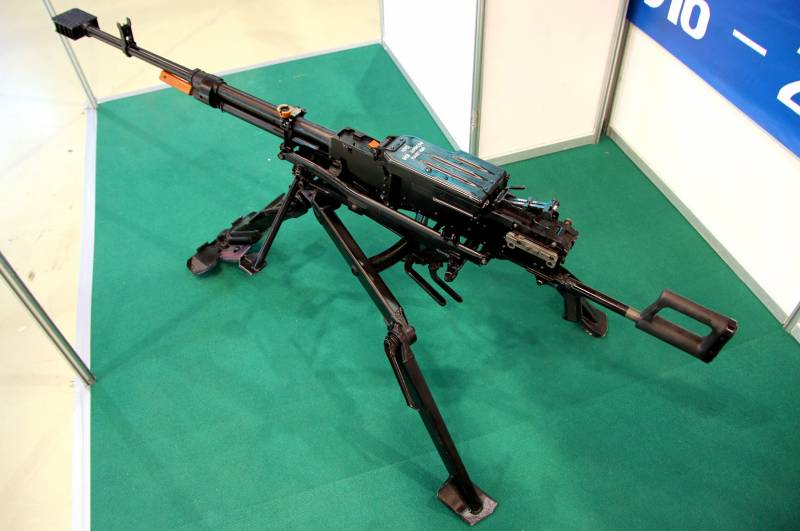 High technological effectiveness of production and the quality of technical solutions used in the design of the machine gun provided Korda with high operational and combat characteristics. The machine gun is favorably distinguished by high reliability of work in a very wide range of temperatures - from -50 to + 50 degrees Celsius. It can be used freely in dusty conditions, as well as after immersion in water, without multi-day lubrication and cleaning, during icing, and also in other difficult operating conditions.

The advantages of Kovrov machine gun rightly include reliable operation and the ability to conduct intense fire without additional cooling of the barrel, while maintaining a given aiming accuracy. The accuracy of the battle, the stability of accuracy and the rate of fire throughout the entire technical resource of exploitation are also among the advantages of the model. Special mention deserves the convenience of servicing a large-caliber machine gun and the possibility of eliminating some of the identified faults directly during combat use of weapons (on the battlefield) by means of calculation using for this the capabilities of an individual spare parts tool, as well as good maintainability of a large-caliber machine gun directly in military conditions using group and repair spare parts. The machine gun in some conditions can be brought back to life without being sent to the factory. 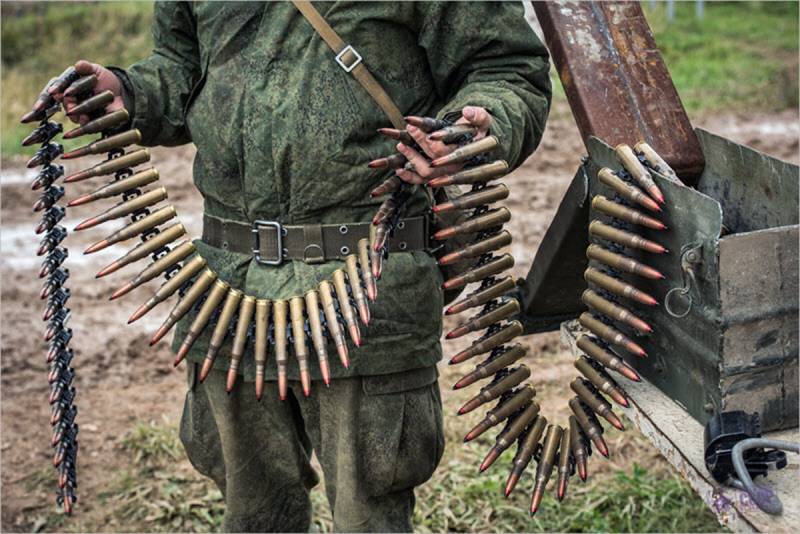 Shooting such cartridges at the enemy’s well-fortified positions is very effective and has a demoralizing effect on the enemy, since even brickwork in several bricks ceases to be a reliable defense during firing. The disadvantages of the Kord machine guns with a stretch include the unmasking effect when firing, when the flame is pulled out of the muzzle brake compensator in different directions, and the nearest dust and leaves rise into the air. On the other hand, it is possible to detect a firing point with a large-caliber machine gun on other grounds, especially if the shooting has been going on for quite a long time.

Kord heavy machine gun is a real military weapon. The machine gun managed to war during the Second Chechen War, the armed conflict in South Ossetia in 2008, and is also widely used during the fighting in Syria. According to the "Bulletin of Mordovia", the government forces of the Syrian Arab Republic actively used Russian machine guns "Kord" during battles in urban environments. According to journalists of the publication, the infantry versions of the large-caliber machine gun on the bipods are especially convenient when used in combat operations within the city limits. The power of weapons allows you to confidently hit the militants, who can hide behind brick or concrete walls. Earlier it was also noted that the machine gun had proved itself very well in Syria, where it was also used to suppress and destroy enemy snipers.

Ctrl Enter
Noticed oshЫbku Highlight text and press. Ctrl + Enter
We are
Machine guns "CORD": new samples of the famous familyThe Kalashnikov Concern is working on the RPK-400 machine gun
21 comment
Information
Dear reader, to leave comments on the publication, you must to register.