January 23 2018
111
How can one investigate the past if, in essence, it simply does not exist? We can’t remember what we ate for breakfast a year ago, but ... if all this was recorded and photographed, then the smallest details of this breakfast will immediately come to life before our eyes. That is, it is obvious that ancient illustrated books, manuscripts containing many miniatures on their pages are wonderful historical a source.


Fortunately for us, thousands of books of this kind have reached our time, and tens of thousands of beautifully made miniatures in them allow us to look into the past with our own eyes. Unfortunately, even in the recent past it was not possible to redraw and photograph all of them. Today, it is possible to digitize many previously unknown incunabula and introduce them into scientific use, compare the images placed in them, determine the time, place of their writing and even the “master's hand”.

But even a purely visual acquaintance with the medieval miniature allows you to quite clearly imagine, say, the same genesis of knightly weapons and even get to know it in detail, which is important especially for the most ancient specimens, artifacts that have not survived. There were already materials on the pages of the VO that, using examples of medieval miniatures from such famous manuscripts as the Bible of Matsiyevsky and the Psalter of Luttrell, told about this. But in relation to a specific time, the time of their writing.

Today we will “go through time”, considering one historical event through how it was reflected in miniatures from books written in different years. That is, it will be a kind of photo chronicle of history. Well, the event in question is the assassination of Thomas Becket, Archbishop of Canterbury.

First, a little about him. The murder of Thomas Becket took place during the reign of King Henry II Plantagenet - December 29 1170. It is known that Thomas Becket himself came from a noble Saxon family and received an excellent education at that time. Being close to the court, he ... became friends with King Henry and at first supported him in all his endeavors and feasted with him. Even the bishop of Canterbury, he became contrary to the opinion of many prelates, and only by the will of the king, who saw him as his ally. However, on the issue of reorganizing the church, they disagreed. Beckett turned out to be a zealous supporter of church traditions, while Heinrich strongly defended his reforms. So much so that Becket had to leave England and live abroad. The pope intervened in the confrontation between the king and the archbishop, threatening the king with imposing an interdict on England. Heinrich could not resist the Pope, but Becket, who had returned from the continent by this time, also did not want to compromise on principles.

When Henry II was told at a feast in honor of Christmas that Becket did not want to be reconciled, the king was terribly angry and said something like: "Is there really no brave people in my kingdom who will save me from this traitor!" Historians are still arguing whether what he said was due to a state of affect, or whether he was directly ordered to kill the archbishop, but there is no more precise information about this. In any case, there were four knights who came to worship in Canterbury Abbey, demanded Becket to get out of the kingdom, and when he refused, they hacked him with their swords right at the altar in front of his flock!

Henry II severely punished the killers of the prelate. However, even this did not save him from papal rage and universal condemnation. He brought public repentance, promised to send soldiers on a crusade and submit to the church. In July, 1174, in Canterbury Abbey, the king had to go through the line of monks whipping him, and then spend the whole night at Becket’s grave. It is believed that the king himself did not forgive himself for the death of this man, whom, despite the difference in views, he loved and respected.

Needless to say that the “crime of the century”, and the assassination of the archbishop in the cathedral could not be called at that time, caused a lot of his descriptions to live, entered the chronicles not only of England, but also of neighboring countries, in one word became an important spiritual topic life of the Middle Ages. And of course, it was reflected not only in the texts, but also the miniatures accompanying them. And since they are all dated, thanks to this we get a real “picturesque sketch” of this event. So: 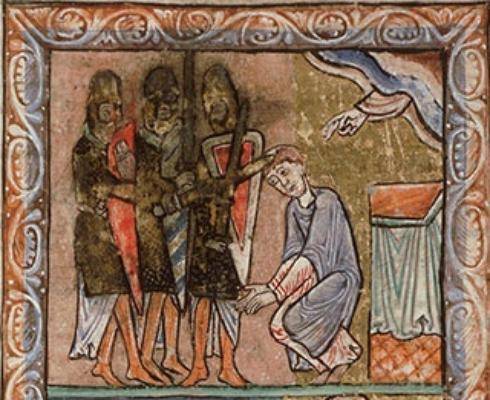 The first miniature depicting the scene of the assassination of Thomas Becket, we see in the Fisciana Psalter (Amiens State Library), dated 1170-1185, that is, written and illustrated right "hot on the heels" of this event. On it we see warriors in the generation of chain mail, dome-shaped helmets with nose pads and almond-shaped shields in their hands. The images on the two shields can be interpreted as stamped. From under the chain mail you can see the legs in the races and the long-sex sub-white clothes of white color. 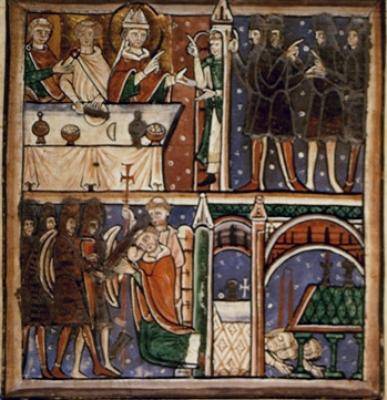 On the 1180 miniature from the manuscript by Kladius B. “Becket’s Life” (British Library), we see almost the same thing: a similar cut of chain mail and shields, although the two shields are depicted oval. There are no armor on their feet, even the simplest ones. 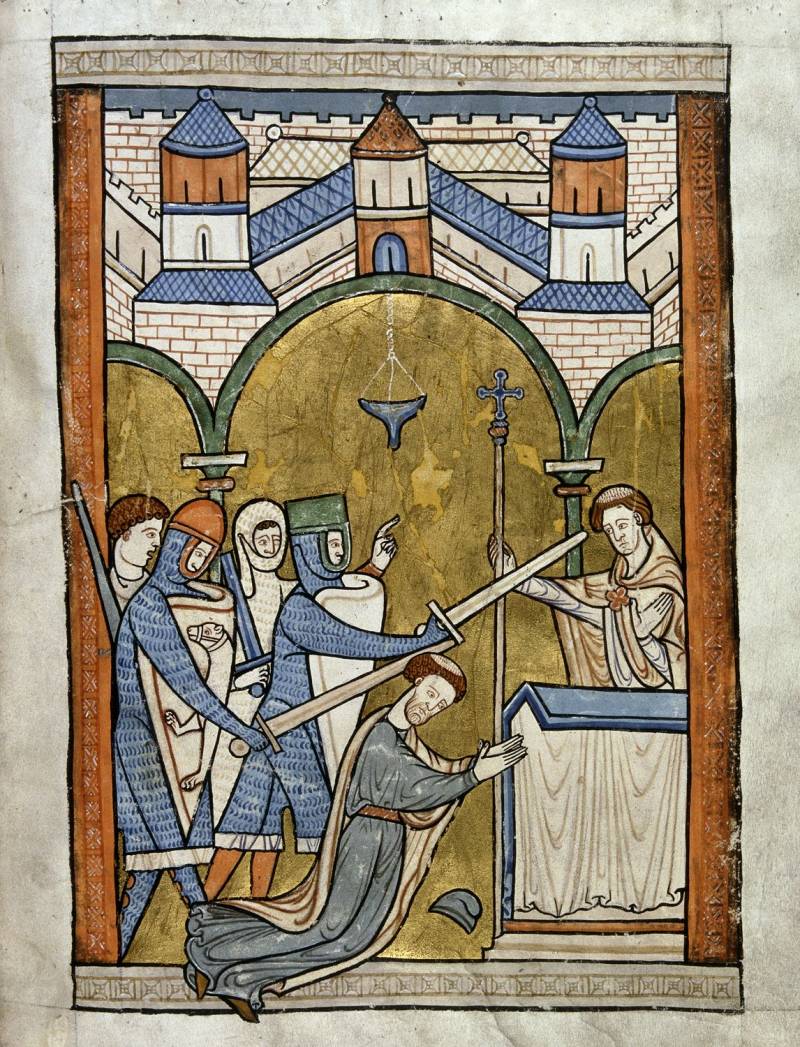 Perhaps the most famous miniature depicting the scene of the murder of Thomas Becket, the end of the XII century. (British Library). Fitz-Urs knight (you can recognize him by the coat of arms depicting a bear) has the very first mail armor in the form of a band with ties on his calves. For the first time, their image appeared on the “Bayesian canvas” of 1066, and only by the end of the 12th century. we see them again, almost unchanged. The helmet of the first knight is of the “tablet” type (or “helmet pan”), painted in green. It is not clear that this is for his strip passing through his chin, because if it is made of metal, then such a helmet can not be put on his head! 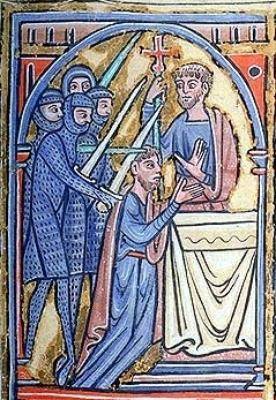 Huntingfield Psalter 1212-1220 from the Morgan Library in Oxford. On it we see warriors dressed in chain mail from head to toe. The mouth is closed by a flap valve. Thus, before us are typical warriors of the "era of chain mail" - no external differences, one solid metal that fits the figure! 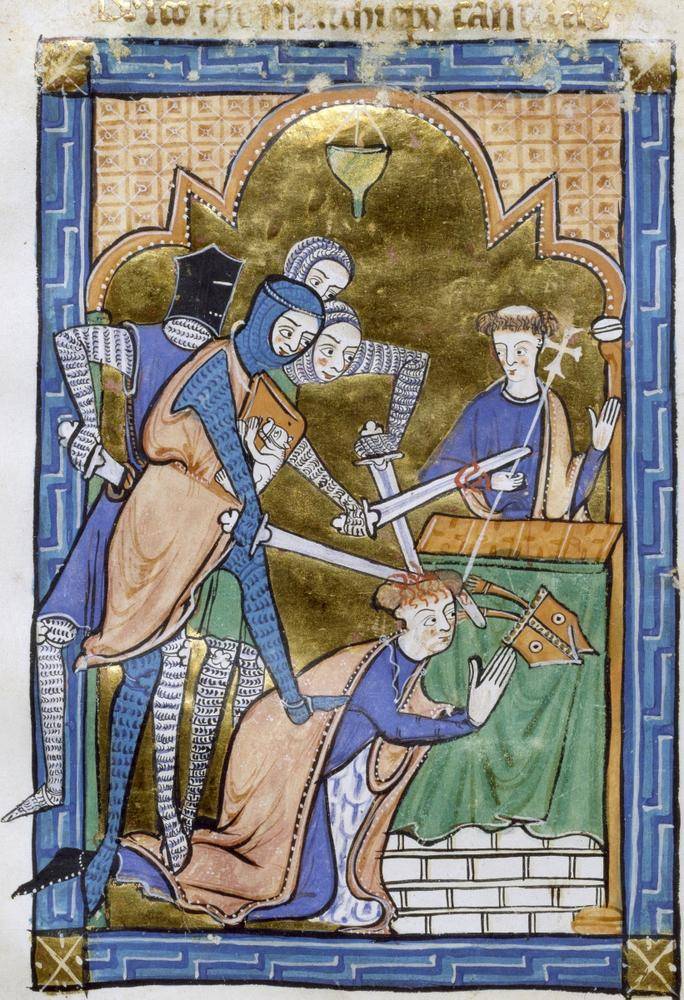 England, 1250, Psalter Carrow, Walters Art Museum. It took only 30 years, and we see the changes that have occurred. The mail armor itself remained the same, but the fully-fitted tophelm helmet and padded surcoas appeared. On the shield is clearly depicted coat of arms. 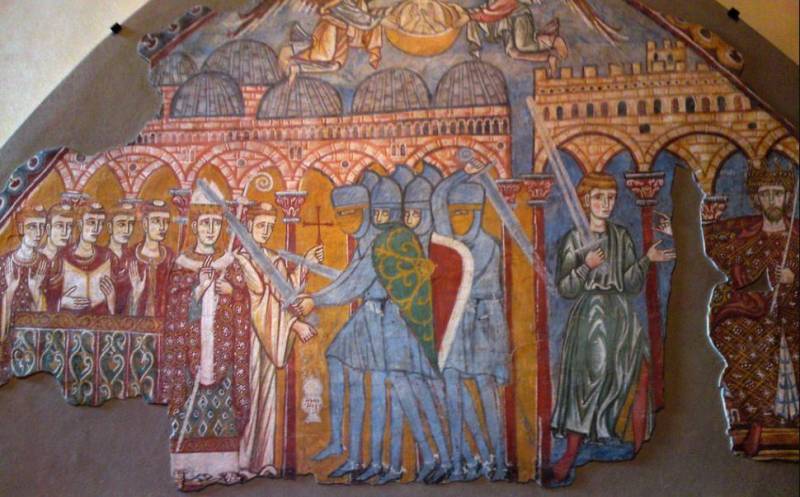 The Murder of Thomas Becket, fresco from the Museum of Diosezano, Palazzo de Trescento, Treviso, Italy, 1260. On it we see typical warriors of this era in mail armor, masked tablets and helmets with a curved tip. 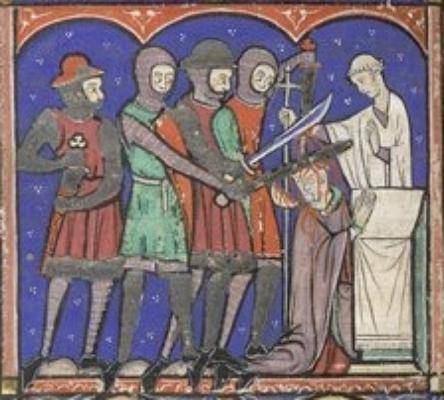 Illustration of the Bible, 1250-1299, British Library. Here we see everything the same as in the previous miniature, except that arms killers added felchen, which is used even by noble knights, approximate to the king. 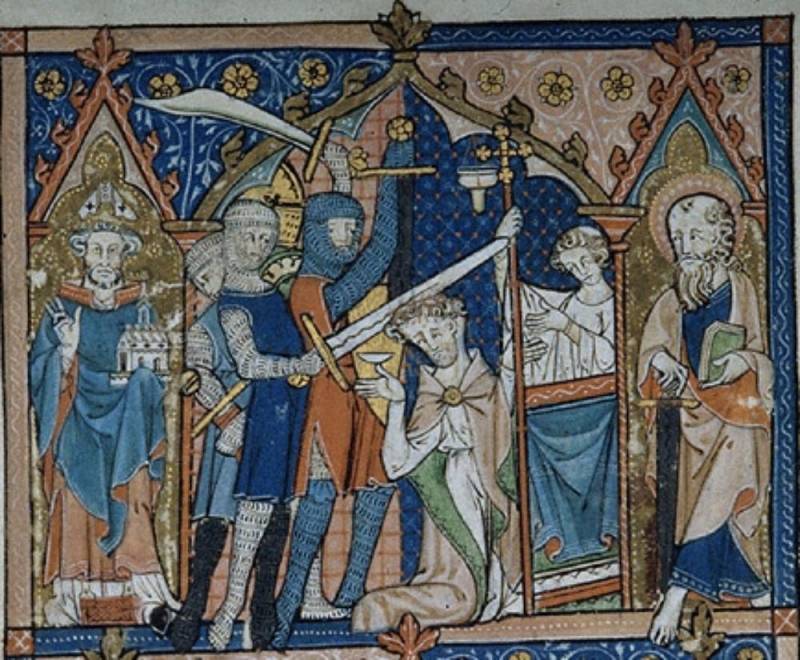 A repetition of the previous picture in the miniature from the Psalms of Ramsey 1300-1310. Morgan Library in Oxford. Again, we see a surco, felchen (a few strange outlines, really) and swords with very large crosshairs. Surko have cuts on the sides. The first warrior from under the chain mail can see a piece of the kneecap. 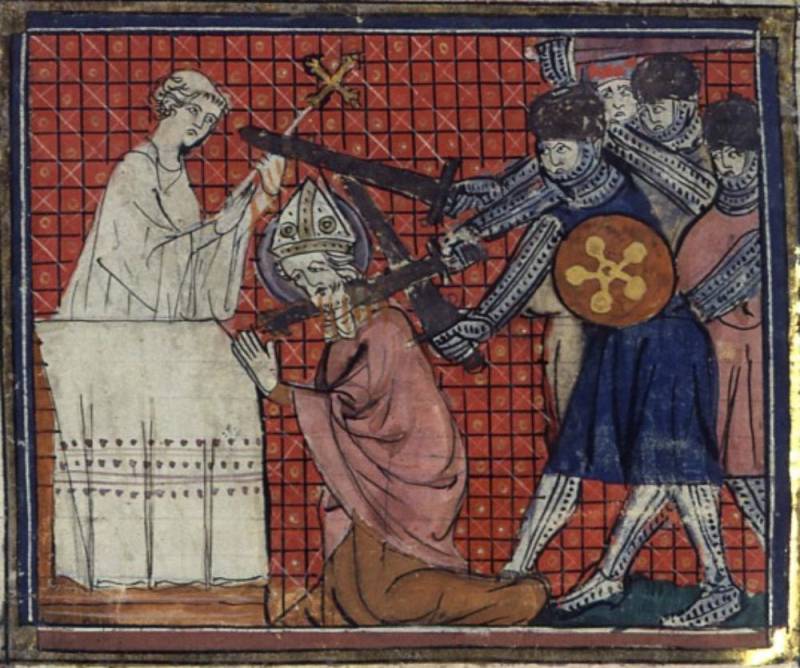 Miniature from the Lives of Saints 1300-1325 France (National Library, Paris). Approximately the same epoch as in the previous miniature, but on the heads of the warriors the first helmets are bascinetts of a globular shape, and on the legs there are plates covering the lower leg in front. The shield is obviously heraldic, but somehow round! 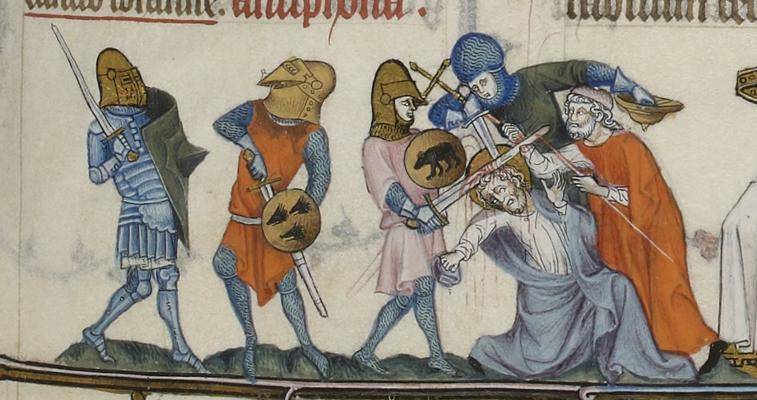 "List of Preachers" 1323-1326's. National Library of France. Here we already see the armor of the era of mixed mail-plate-plate armor, closed helmets with visor, plate gloves, armor for legs and hands, for some reason, again, armorial round shields and immediately a huge iron-covered shield with an umbron. That is, looking at this miniature, we see that E. Okshott had every reason to single out the beginning of this epoch as referring to this particular time. 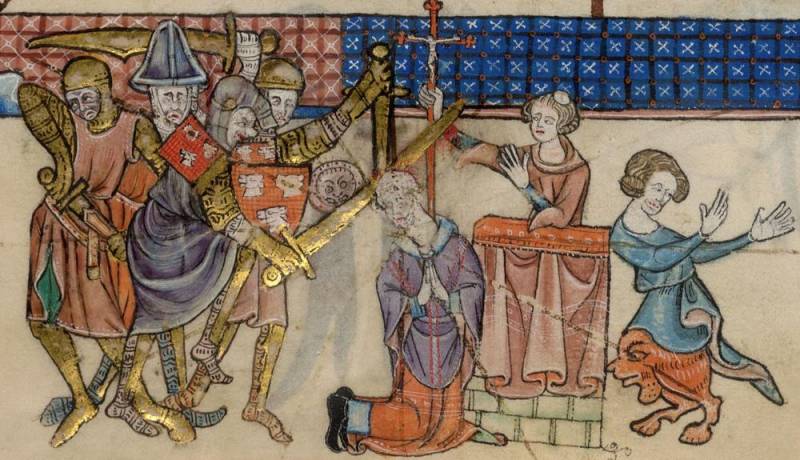 The famous "Psalms of Lattrell", 1320-1340. British Library. There is a lot of gilding, a shield in the form of an iron and finally we see on the knight’s shoulders ailets, the image of which repeats the image of the coat of arms on his shield. But as for the terrible species, then if we analyze a sufficiently large number of miniatures, we can conclude that this is a typical "weapon of the villains." In reality, nothing of the kind existed, but in portraying him like this, the artist seemed to emphasize the completely villainous nature of its owner and the one committed. And the felcen is no more fantastic than, the more vile the characters are usually depicted in miniature! 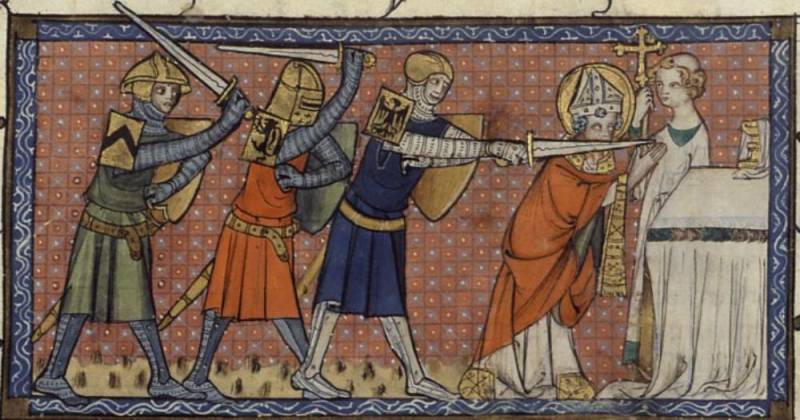 "Lives of the Saints", 1325-1350 National Library of France, Paris. Here, for some reason, there are only three knight-murderers, although it is known that there were four of them, and everyone is dressed according to this particular era. Surcoat, greaves, knight belts, traditional-shaped shields and islets. On the far left is the “iron hat” worn over the bascinet, on the middle - tophelm, on the far right is the simplest bascinet descending on the ears. The shape of the swords has clearly changed, right? 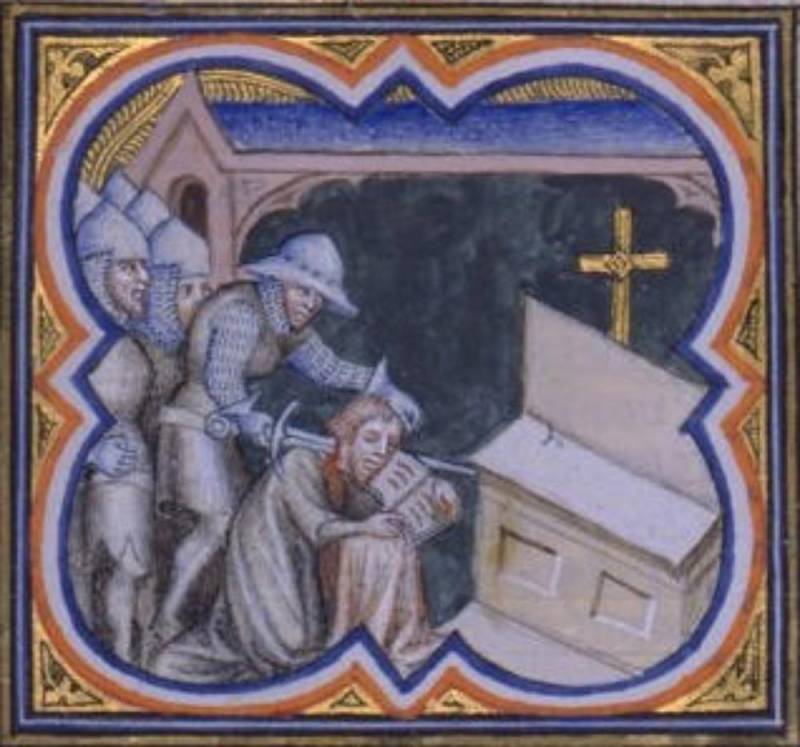 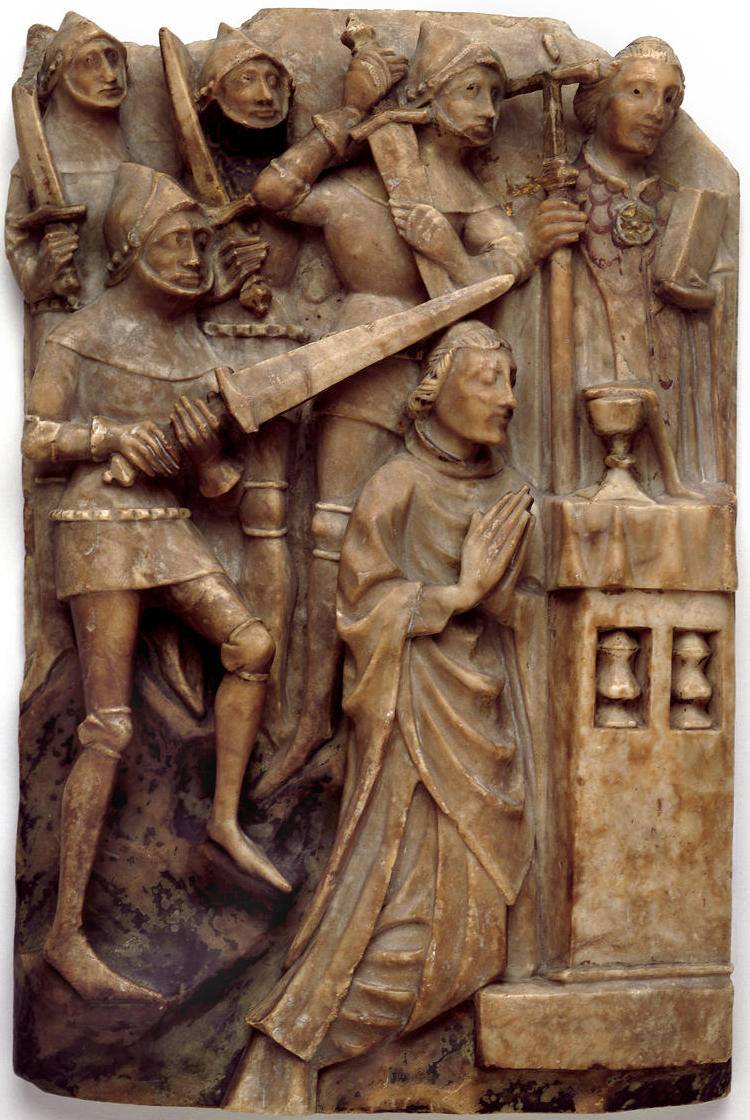 Conclusion: the miniaturists of the Middle Ages did not possess historical thinking and believed that the life around them was unchanged. Therefore, they photographically accurately reflected in miniatures their time, but not the characteristic features of past eras. This circumstance is important for the dating of certain historical manuscripts ... although, yes, of course, it is quite possible to assume that these miniatures are just a fake (like the books they are in!), Commissioned by the Vatican, the Jesuits , Freemasons and Illuminati of Western countries, once again to stupefy-to think over the advanced Russian superethnos and to instill in it ideas about its own inferiority. After all, in fact, Thomas Becket - this is none other than Thomas Slav (he was even called Thomas, who does not know this ?!), who fled to England after the defeat of his revolt against Byzantium (Becket ", But the" lec "was lost, and the" g "was re-assigned to" k ", and the" em "was added!), And there killed by the orders of the Jewish banking elite! There, however, there is a time difference, but who confuses such a trifle now ?!

Ctrl Enter
Noticed oshЫbku Highlight text and press. Ctrl + Enter
We are
Chernobyl notebook. Part of 3Father told
111 comments
Information
Dear reader, to leave comments on the publication, you must to register.