Dostoevsky v. Tolstoy on the issue of humanitarian interventions

January 18 2018
12
Dostoevsky was for military intervention in the Balkans, and Tolstoy opposed it. Their arguments are surprisingly relevant for our current wars. 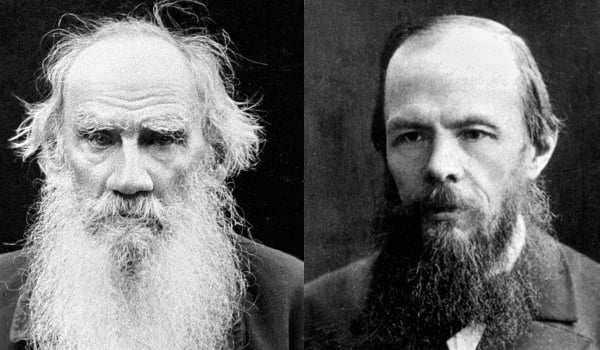 First, a little stories. In the summer of 1875, the Orthodox Christians of Herzegovina rebelled against their Ottoman overlords. In 1876, the Slavic principalities of Serbia and Montenegro declared war on Turkey, and an uprising began in Bulgaria. Russia wholeheartedly supported the Serbian struggle. Russians sent money and medicine to Orthodox Slavs, and many Russian volunteers went to the Balkans to fight. Russian newspapers began writing about the Serbian struggle, as evidenced by the conversation between Koznyshev and Prince Shcherbatsky in Tolstoy’s novel Anna Karenina:

“All the various parties of the intelligentsia of the world, so hostile before, all merged into one. Every discord is over, all public bodies say one and one thing, everyone sensed the elemental force that seized them and carries them in one direction. ”

“Yes, it’s all the newspapers that say,” said the prince. - It's true. Yeah, so it is all one thing, that just frogs before a thunderstorm. Because of them and not hear anything. "

From the summer of 1876 to the spring of 1877, there was a lively public debate in Russia over whether the country should intervene in the conflict in the Balkans. Fyodor Dostoevsky passionately advocated military intervention for humanitarian and patriotic reasons. Lev Tolstoy, although he was not yet a staunch pacifist, did not see the point in Russia's participation.

Dostoevsky spoke in unison with the mood prevailing in society. Its writing in parts around the time of The Writer's Diary often reminds me of the “US military blogs” of the 2002-03 period. It is striking how the various arguments and motivations of Dostoevsky in support of the war merge together and reinforce each other. His most commendable motivation is keen empathy for suffering, a feeling of a powerful humane need to put an end to the atrocities of the Turks. But he immediately goes from descriptions of terrible atrocities to fantasies about the capture of Constantinople by the Russians, which was the center of Orthodoxy. Dostoevsky admires Russian heroes and speaks with disdain about foreign diplomats, condemning those who "talk about the damage that war can cause in an economic sense." He sublimely expresses confidence that the Serbs will welcome Russian intervention, and those who will not be, this is an unrepresentative class living apart from their own people. He does not have the feeling that atrocities are committed by both parties.

Dostoevsky feels that the national ill health in Russia has been defeated, that the level of popular support to the Serbs proves the people's spiritual superiority over the intelligentsia. He is angry at those Russians who have sympathy for the Turks. He is absolutely confident of victory and that history is on his side. He comes up with tips and suggestions on what to do after the complete defeat of the Ottoman Empire. He is convinced of the exclusivity of his own country, that the movement for war "by its sacrificial nature and unselfishness, by its devout religious thirst for suffering for a just cause, has almost no precedent among other nations." He finds it hard to believe in the good faith of those who look at it differently. Sometimes he thinks in terms of “crusades” and indulges in apocalyptic dreams of a decisive war between Christianity and Islam.

English opposition leader William Gladstone (William Gladstone) was shocked by Turkish atrocities in Bulgaria and believed that England should help expel the Turks from this country. But Prime Minister Benjamin Disraeli (Benjamin Disraeli), acting in the spirit of realpolitik, pursued the official British line on an alliance with Turkey against Russia. The fact that Disraeli was a Jew gave Dostoevsky a certain opportunity to build conspiracy theories.

In the meantime, Tolstoy was finishing Anna Karenina. After the suicide of Anna, Vronsky went to the war, collecting a squadron with his own money. And this war is not just anywhere, but in Serbia. Katkov’s Russian Herald, in parts where Tolstoy’s extremely popular novel was published, refused to print the eighth part, publishing the following note instead:

"In the previous issue, at the end of the next part of Anna Karenina," Continuation follows. " But with the death of the heroine, the novel actually came to an end. The author planned a multi-page epilogue from which we learn that a distraught and grieving Vronsky went to Serbia as a military volunteer. Other heroes are all alive and well, and only Levin, in his rural retreat, is still hostile to volunteers and Slavophiles. Perhaps the author will add several chapters on this in a special edition of the novel. "

The Herald is slyly making it clear that Levin, the hero of the novel, written off right from Tolstoy, is not very healthy. Anna's suicide in the penultimate issue is not very logical from the point of view of maintaining the reader’s tension. But in reality, the problem could lie in the fact that Vestnik campaigned for intervention in the Balkans under conditions when Tsar Alexander II continued to vacillate.

In the eighth part, Levin is not so much "hostile" towards the Slavophiles, as confused. In conversations with people like Koznyshev, he does not even go to confrontation and does not seek to support the dispute for a long time. His position — and this is essentially the position of Tolstoy himself — borders on bewilderment about why so many people so passionately call for action in a country of which they know little. The same feeling sometimes arises in myself when I hear arguments in favor of our current interference in the affairs of Libya. Levin suggests that when people are passionately committed to some distant business, instead of devoting themselves to solving problems that are much closer, the reason for this should be sought in their psychology.

This is similar to the diagnosis of Dostoevsky's perceptions. That huge number of arguments in favor of war, which the writer brings, raises doubts that this is the real reason. Slavoj Zizek (Slavoj Žižek) makes a similar argument about George W. Bush and the war in Iraq. Dostoevsky in The Writer's Diary declares that war is the only way to unite the various classes of Russia, that Russia's moral duty is to take this chance to conduct an "unprecedented war in defense of the weak and oppressed" and fulfill its world-wide historical outline. Where Dostoevsky argues that the most correct answers must be sought in bright emotions and in the belief that the world is ripe for transformation, Tolstoy stands for a passionless and sensible decision. Of course, Tolstoy’s political views are equally a reflection of his own emotional state, his sense of detachment from military hysteria prevailing around. Perhaps this detachment deepened the sense of personality crisis in Tolstoy and created the conditions for his later pacifism.

Tolstoy published the eighth part of Anna Karenina in a separate edition and for his own money. After reading it, Dostoevsky was furious. He responded in the Writer's Diary, describing the terrible state of a girl who was forced to watch her skin being ripped off from her father, and putting this description on the image of Levin, who was serenely philosophizing on his huge estate. Pacifism requires a person to maintain some kind of emotional distance. Dostoevsky bypasses Tolstoy with a direct emotional appeal: how can we stand by and do nothing when such terrible things are going on? Perhaps Dostoevsky is right in saying that Tolstoy’s privileged lifestyle contributed to the emergence of such a feeling of detachment.

At this point in the dispute between the two writers, Russia officially declared war on Turkey. The war lasted about a year. Cossacks systematically attacked Muslims and Jews, and by 1879, a third of all Muslims in Bosnia-Herzegovina either emigrated or were killed. The intriguing moment of this historical drama is that the war gave rise to the word “hurray-patriotism”, which emerged from the song of the British music hall:

"We do not want to fight, do not want, damn it
We have ships, we have soldiers, we have money.
We have fought with a bear before
And while we are real British
The Russians will not take Constantinople. ”

In this case, the British kept mostly away from the war - although they sent a fleet to Constantinople when the Russian army began to approach the city. And then the Russian-Turkish agreement was signed, according to which most of Russia's requirements were met. Serbia gained independence; in Bosnia-Herzegovina, self-government was established; restrictions for Christians under Turkish rule were reduced. But the united European powers demanded a revision of this treaty, and at the Berlin Congress the Russian conquests were eliminated. The Berlin Congress allowed Austria-Hungary to occupy Bosnia-Herzegovina. But Britain, following the logic that had perplexed all commentators of the time, for some reason captured Cyprus. And in none of these places a lasting peace has come.

The more remote consequences of that war were later described by the great Russian prose writer Alexander Solzhenitsyn in his historical work The Russian Question. Solzhenitsyn notes that there were eight Russian-Turkish wars: four in the eighteenth and four in the nineteenth century. He writes: “Two unfortunate ideas relentlessly tormented and dragged all of our rulers in a row: help-save the Christians of Transcaucasia and help-save the Orthodox in the Balkans. You can recognize the height of these moral principles, but not until the complete loss of state meaning and not to forget the needs of your own, also Christian, people ... "

Solzhenitsyn particularly condemns the 1877 war of the year: “Such a“ won ”war is lost, and it would be cheaper to not even start it. The Russian military and financial forces were undermined, the public mood was depressed - and the era of revolutionism and terror started right from here ... ”

The main long-term consequence of the Russian-Turkish war is the weakening of both empires until their collapse. The consequences of humanitarian disasters were worse than those that Dostoevsky rightly condemned. The urge to conduct humanitarian intervention is worthy, but it may result in a long civil war, a powerful massacre, and the weakening of the interventionist states. Will future historians not write that the series of wars in the Arab world at the dawn of 21 has become one of the key reasons leading to the end of the “American century”?

Ctrl Enter
Noticed oshЫbku Highlight text and press. Ctrl + Enter
We are
Slavenko Terzic: “There is no Europe without Russian civilization”Oleg Valetsky about the wars in the Balkans, their causes and Russian volunteers
12 comments
Information
Dear reader, to leave comments on the publication, you must to register.