Glitter and poverty of the royal officers 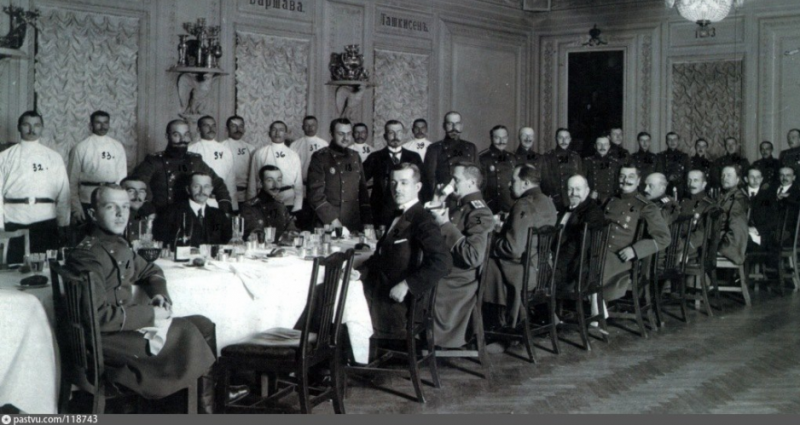 After the collapse of the USSR, the concept of "officer" and "low salary" became inseparable satellites. In the last decades of the Soviet Union’s existence, they belonged to one of the most well-to-do categories of society, officers rapidly lost this status. And more and more often in conversations with them one has to hear complaints about the current situation, especially in comparison with the life in that pre-revolutionary Russian army. Say, how much better it was for the lieutenant gentleman than for his comrade lieutenant. Another great myth ...

From the beginning of this century, the material situation of officers, of course, has become noticeably improved. However, this problem cannot be completely solved.

Not as a consolation to current fathers-commanders and military pensioners, but simply to restore historical In fairness, we note that out of a far from beautiful present, everything that has long passed usually seems much better. So, even ordinary things, covered with a patina of time, begin to be valued as rare antiques.

A man in a tavern more officer gets

So, how did the Russian officers live in the last decades before the revolution? The best way to answer this question is historical documents.

“The continuous and supremely hard work of the officers is not rewarded in any way satisfactory, not only in comparison with all other professions, but even in relation to the most limited daily needs of the officer's life. The severity of the economic situation of officers has become particularly harsh in recent years due to the excessively high cost of living, ”Minister of War Vannovsky wrote in an ever-present report to Emperor Alexander the Third.

General Kuropatkin, who replaced Vannovsky as minister, faced the same problem. In his diary he wrote: “Vannovsky said to the sovereign that the main need of the army is an increase in the content of officers.

The man in the tavern more officer gets. I told the sovereign about the same thing, and said that in Moscow, officers shoot out because of wasting 150 rubles. ”

The last protopresbyter of the Russian army and fleet Shavelsky wrote in his memoirs: “The officer was an outcast of the royal treasury ... The officer received beggarly maintenance that did not cover all his urgent expenses. And if he didn’t have his own means, then - especially if he was family - he eked out a miserable existence, malnourished, confused in debt, denying himself the most necessary. ”

We all knew that the salary will never see

How so?! The textbook image of the hussar, to which we are accustomed, does not fit into such a miserable life. And where are the grand revels with buckets of champagne and gypsy choirs, luxurious bouquets for theater divas and other ordinary entourage? There was this. But only a relatively small part of Russian officers who had their own, rather large state. Such, as a rule, served in the guard.

In the Guards units, especially in the cavalry, there could be no question of the existence only due to the accrued salary. The former officer of the Guards Cavalry Regiment, Alexei Ignatiev, recalled:

“When we went out to the regiment, we all knew very well that we would never see a salary: it would go entirely to bouquets to the empress and regimental ladies, to wreaths to former cavalry guard officers, to gifts and tokens leaving the regiment, to extra-long blowers, to the construction of a church, to an anniversary a regiment and the associated luxurious edition of regimental history, etc. The salary will not be enough even to pay for farewell dinners, receptions of other regiments, where French champagne will not only be drunk, but will also go into the pockets of bartenders and regimental suppliers. At least one hundred rubles a month was required to pay bills for the officers' artel, and at the camp time, when drinking bouts were an integral part of any show, and this money could not be enough. For the rest, there was no money left from the paycheck. And the costs were high. For example, a chair in the front row of the theater cost almost ten rubles. Officers of our regiment were forbidden to sit beyond the seventh row. ”

Not much cheaper cost the service in the Guards infantry. Here is what the former Guards infantry hero Gerua recalled: “Even in the modest Guards regiments, to which Leib - the Jäger Guards, belonged, it was impossible to serve without any personal funds or help from home. In some regiments, leading an important and broad lifestyle, the necessary supplements to the salary should have exceeded the last three to four times or more. In the Life - Guards Egersky regiment could manage fifty rubles or even less. " Naturally, the scions of not just high-born, but also very wealthy surnames could afford to serve in the Guards regiments, and, moreover, they often had to stop serving in the Guard after three or four years of heavy spending. True, rich guardsmen made up a relatively small percentage of the total number of Russian officers. And the overwhelmingly officer corps of army infantry consisted of people for whom a more than modest salary was the only source of livelihood.

In a particularly difficult situation were junior officers who received thirty-nine rubles seventy-five kopecks a month. Money is more than modest. At the same time, a skilled worker in St. Petersburg received no less than twenty rubles, and often much more. But the proletarian, unlike "his nobility", was not forced to spend money on maintaining military prestige. Even when visiting the theater, the officer had to avoid buying the cheapest tickets - the gallery was not for him.

Bachelors by order of command

It was because of the difficult financial situation that the officers had no right to marry for up to twenty-three years, and from twenty-three to twenty-eight were to make the so-called reverse, giving annually at least two hundred and fifty rubles as interest. Later it was required that the interest be at least three hundred rubles. But even after twenty-eight years, an officer who received less than a thousand two hundred rubles a year was obliged to make the same ill-fated reversal. They did this in order to provide the officer family with a decent living wage. Thus, it turned out that an adult with a higher military education received two hundred and fifty - three hundred rubles a year less than was required for the maintenance of himself and his family.

According to the calculations of the famous Russian historian P. Zayonchkovsky, the total monthly deficit of the officer budget was ten rubles, forty-five kopecks. And with the most modest expenses, the officer did not even have the opportunity to eat normally, making tea and bread for breakfast and having dinner every day. Moreover, these calculations were made without taking into account the needs for tobacco, strong drinks and entertainment, especially necessary for a single man.

The Russian officer was the lowest paid among his colleagues from serious European armies. In 1898, a Russian lieutenant received six hundred and seventy-seven rubles a year, a German one — eight hundred ninety-five (in terms of rubles), an Austro-Hungarian — nine hundred fifteen, and a French — nine hundred thirty-six. And, say, the lieutenant colonel in Russia is one thousand eight hundred eighty, in Germany three thousand three hundred eighteen, in Austria-Hungary two thousand five hundred thirty and in France two thousand six hundred thirty five rubles.

Equally difficult was the financial situation of the officers, who had retired and existed solely on retirement. General Anton Ivanovich Denikin, whose father retired as a major of the border guard, very colorfully described the conditions of "decent poverty" in which their family lived. Once, Ivan Denikin, a heavy smoker, went so far as to promise to quit smoking for reasons of economy. And he smoked the cheapest tobacco, on which you will not save much. True, having seen the suffering of her husband, Mrs. Denikina herself asked him to refuse such a painful means of replenishing the family budget.
Naturally, many did not maintain such living conditions. At the end of the past - the beginning of the present centuries, war ministers did not cease to complain that army officers were resigning en masse. They left for private service, border guards, who received substantial income as a percentage of the cost of confiscated contraband, and even in a separate corps of gendarmes.

Only after defeating 1904 - 1905 in the war with Japan, did the state finally find the opportunity to adequately maintain its defenders. True, they were no longer happy for the improvement in their position ...

Ctrl Enter
Noticed oshЫbku Highlight text and press. Ctrl + Enter
We are
Chernobyl notebook. Part of 3Father told
54 comments
Information
Dear reader, to leave comments on the publication, you must to register.