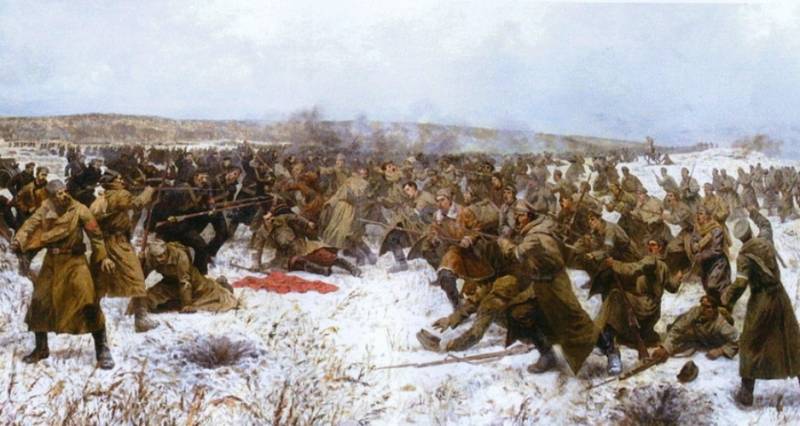 January is a significant month for Ukrainian nationalists. 1 January, they celebrate the birthday of Bandera, and 29-th - "heroes Kruty" commemorate.

Shouting and shouting will be shouting: “Krut heroes - glory, glory, glory!”, “Bandera will come - bring order!”, “Glory to the nation - death to enemies!”.

Yes, if only the frostbitten nationalists of the “Krut heroes” would have been glorified. Viktor Yanukovych also said in his address to the Ukrainians: “Today we honor the feat of the Ukrainian youths who died defending their state. The courage and self-sacrifice of several hundred military cadets, students, and high-school students became a real example for subsequent generations of fighters for independence. ”

The question arises - what is the “glorious” thing that happened on 16 (29) on January 1918 of the year at the railway station near the village of Kruty, on the 130 kilometer in the north-east direction from Kiev? What kind of "heroes" were there?
And there the advancing detachments of the Reds broke up as a ball a rag a detachment of the UPR (Ukrainian People's Republic), a nationalist state.

Fighting in the full sense of what happened at Kruty would be very difficult. “When Bakhmach and Chernigov moved to Kiev from Bolshevik echelons, the government could not send a single military unit to repel them. Then a detachment of students and high-school students of the senior classes was hurriedly assembled and threw them — literally for slaughter — towards well-armed and numerous Bolshevik forces.

Unhappy young people were taken to the station Kruty and landed here on the "position". At a time when the young men (most of them never holding guns in their hands) fearlessly spoke out against the advancing Bolshevik detachments, their bosses, a group of officers, stayed on the train and arranged here a drinking party; the Bolsheviks easily broke up a squad of youth and drove him to the station. Seeing the danger, those on the train hurried to give a signal to leave, without remaining a minute to take the runners with them ... ”- recalled Dmitry Doroshenko, Chairman of the General Secretariat of the Central Council of the UNR.

Many modern figures of Ukraine compare this whole blood circus with inimitable seriousness ... with a battle of three hundred Spartans at Thermopylae. So, no more, no less.

The political party "Rus" (Ukraine) declared at one time on this occasion: "This holiday, like many other holidays of" protecting ", does not carry a positive and unifying idea for the population of Ukraine. Emphasis is placed on the sacrificial death of young children, but is silent about the fact that the officers who were supposed to die to the fighters, meanly fled from the battlefield. We grieve for the dead, but remember those who thoughtlessly, for the sake of their political interests, threw unprepared young men at bayonets and bullets of the many times superior forces of the Bolsheviks. The episode with Kruty is used by Ukrainian national patriots to incite anti-Russian hysteria. Although the battle itself took place between the troops of the RSFSR and the UPR, and then the Bolsheviks did not represent the interests of Russia. At that time, there was a civil war on the territory of the Russian Empire, there were several governments claiming supreme power. The UPR also did not represent the interests of the Ukrainian population, since it was not publicly elected. Talking about the ethnic nature of the conflict in this case is criminal. The battle of Kruty is a local conflict between two political entities and an example of the meanness of the Ukrainian authorities of the time who turned their tactical military mistake into an anti-Russian myth. ”

A very unlucky event was chosen for mythologization. Could Ukrainian nationalists podnuzhitsya and come up with the anniversary of a less ridiculous battle. Who is the "glory"? To the officers who drank on the train, while their inexperienced subordinates were beaten by the Reds, and then left their personnel in trouble? This is not glory, this is a disgrace.

In military stories "Independent protesters" did not always look like such a gathering of armed clowns, as it was under Kruty. But even bigger clowns are those who now glorify the heroes of this disgraceful “drape”.

Ctrl Enter
Noticed oshЫbku Highlight text and press. Ctrl + Enter
We are
Chernobyl notebook. Part of 3About the German army, or How I served in the Bundeswehr
24 comments
Information
Dear reader, to leave comments on the publication, you must to register.