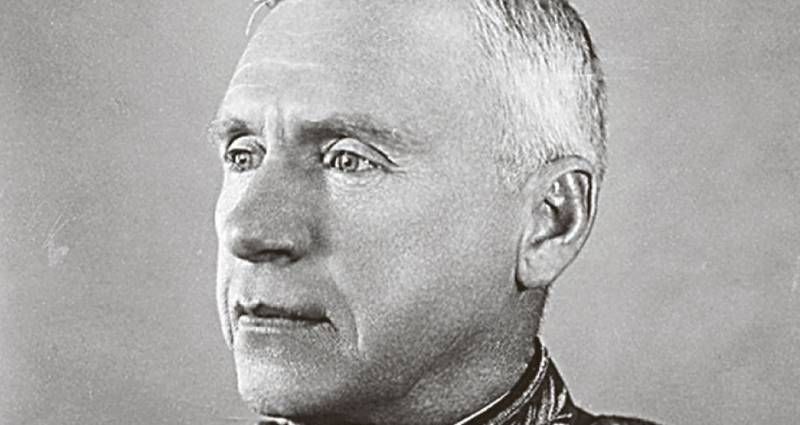 One of the brightest military leaders of the Great Patriotic War was born in the Oryol region 17 January 1893. Fate brought this prominent representative of the Soviet military elite all 57 years old, he died 11 August 1950-th. But he managed to powerfully express himself in four positions. The first is a specific military specialty. The second is command. The third is the development of military theory. The fourth is the organization of fundamental military education.

When the First World War began, the surrounding people had every reason to believe that non-commissioned officer Tsvetaev, who served in the Caucasian army, was an infantryman from God. He ended the war as a lieutenant.

Tsvetaev enthusiastically met a sharp change in 1917, unconditionally supporting the Bolsheviks. He left the ranks of the old army, but for a few months remained civil. 5 May 1918, the regiment of the Red Army arrived. The military specialty of the former lieutenant was the same as in the old army, but career growth was phenomenal: a year from the company commander to the division chief.

Nachalivu had to fight not only against the White Guards, but also against the army of Pilsudski. Participation in the Soviet-Polish war turned into dramatic tests. Tsvetaev and the soldiers entrusted to him were interned in the territory of East Prussia. For many weeks, the Red Army waited for the results of the hard work that Soviet diplomats were doing, but in the end the division returned to their homeland.

Military service Tsvetaeva continued in Central Asia, in Transbaikalia. His division brilliantly manifested itself in fights with basmachis and in the fight against saboteurs. Setting the bar for subordinates, the divisional division Tsvetaev understood that he himself had to grow. The battle officer and brilliant theorist, who covered himself with unfading glory, immediately won the hearts of the students of the Military Academy. Frunze, having merged into the teaching staff of the university. In the interwar period, Tsvetaev passed the steps from the senior lecturer to the head of the general tactics department and met the Great Patriotic War with the rank of lieutenant general.

It could happen that in the most dramatic time a talented warlord would not help the Fatherland: from 5 July 1938 th to 9 September 1939 th he was under investigation. But attempts to declare the general an enemy of the people were in vain, he continued his military career.

It is well known that during the four years of the war the Germans were never able to seize the Soviet Arctic. In the dramatic 1941, the corresponding plans of Hitler's strategists were thwarted by the operational group of troops of the 7 Army of the Karelian Front led by Tsvetaev.

The lieutenant-general remained a tough nut to the enemy, and being the deputy commander of the 4 army. The time has come when they entrusted Tsvetaev with the command of the army - the 10-th reserve. The appointment took place shortly before the start of the Battle of Stalingrad. In the midst of fighting 10-i backup becomes 5-y shock.

A few weeks after the encirclement of Paulus’s troops, the ring attempted to break through General Manstein, who had a reputation as a military genius in the Third Reich. However, the 5 shock army broke the plans of the Nazis.

After Stalingrad, the 5 shock struck Mines, Taganrog, Donetsk. In September, 1943, Tsvetaev becomes Colonel-General and already in this rank takes part in the organization of the most famous military operations on the territory of Ukraine - Melitopol, Nikopol-Krivorozhskaya, Bereznegovato-Snigirevskaya, Odessa.

He was also successful, becoming the Deputy Commander of the 1944 Belorussian Front in 1. He had excellent mutual understanding with the commander of the Marshal of the Soviet Union Konstantin Rokossovsky. But in September, the colonel general of 1944 was re-appointed by the commander of the army - first he headed the 6 army, and then until the end of the Great Patriotic War - 33.

Tsvetaev's publication “How to act to an infantryman in an offensive” had a wide resonance among the front-line soldiers. The core passage sounded like this: “Be courageous. Fight courage loves. Brave is not impossible. Brave enemy is afraid. Always remember: do not take the seat of the city. We also have to take the city and the village, to break the enemy defensive lines. We will be constantly ready to tackle this difficult but noble task. We will be ready for the offensive. Offensive - the path to victory! ". The last appeal sunk into the soul of the front-line soldiers. They knew that where the legendary commander fights, the Wehrmacht is placed in an extremely difficult position under an incredibly powerful onslaught.

The troops entrusted to the colonel general made a serious contribution to the successful conduct of the Vistula-Oder and Berlin offensive operations. Hero of the Soviet Union, Knight 15 of orders Vyacheslav Dmitrievich Tsvetaev ended the war in East Germany.

Recalling the Vistula-Oder operation, we note that in present-day Poland the memory of the commander of the 33 army has not been immortalized, the monuments to our soldiers and officers have been dismantled. It is forgotten that as a result of that operation, a significant part of Poland was liberated. We are talking about 843 settlements, including Kalisz, located near the Nazi death camp Nerem city and, of course, the strategically important city of Schwibus. Fights for him were under the personal control of the Fuhrer. Hitler was well aware of the fact that by occupying Schwibus, the Red Armymen minimize the distance to Berlin to the limit. Therefore, an order followed: "Fight to the last." And this is how the local garrison fought. One can only imagine at what cost the 33 Army took the capture of Schwibus. And this is just one example.

Outstanding merits of Vyacheslav Tsvetaev before the Fatherland predetermined his presence in the Soviet military elite in peacetime. At first he was deputy commander-in-chief of the Southern Group of Forces, then commander of the Southern Administrative Commission. The last position in his career - Head of the Academy named after MV Frunze. He set out to make this educational institution the flagship of the Soviet military education and had a lot of time.

The hero of the Soviet Union Tsvetaev was buried in the Novodevichy cemetery.

Ctrl Enter
Noticed oshЫbku Highlight text and press. Ctrl + Enter
We are
Cossacks and the First World War. Part V. The Caucasian FrontAbout the German army, or How I served in the Bundeswehr
10 comments
Information
Dear reader, to leave comments on the publication, you must to register.