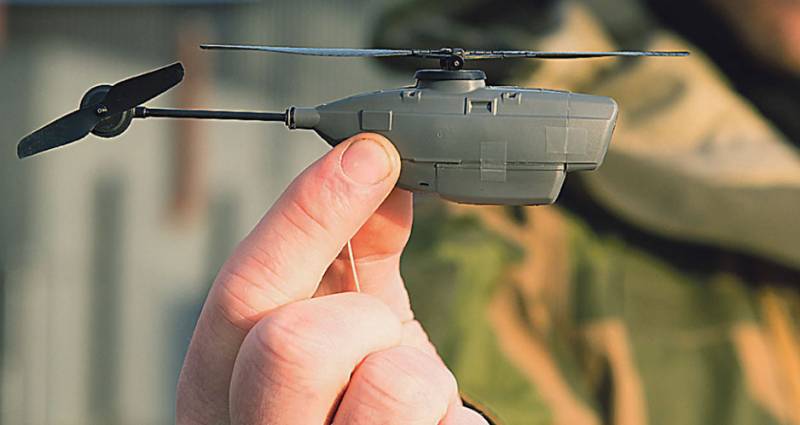 To counter the impenetrable armada, new fire weapons are being developed. But most of them require either permanent retention of the target being struck with a beam of illumination (Chrysanthemum ATGM, Kitolov CS, mine Grani, etc.), or targeting at the moment of target acquisition and shot (Javelin ATGM). This allows you to detect and destroy the calculation. In order to secure it as much as possible, a scheme is proposed that combines the capabilities of the microbLA and military means of dealing with mobile and stationary targets.

The point is this: microscopic unmanned aerial take-off and landing devices with minimal equipment for controlling and searching targets are being developed. Their main task is intelligence and target designation. Such developments are already underway at DARPA. In our case, the devices should be able to be imperceptible as much as possible due to their size and low noise, to be securely fixed on the target surface and to send signals to which the weapons of the armored vehicle will be directed. The option of shooting a beacon from the UAV is possible, the ammunition will be sent to the signal, after which the drone will be returned to the operator, who is part of a linear unit or part of a reconnaissance and sabotage group. As for means of defeating targets, these are shells of barreled or rocket artillery, air munitions. The only condition is that they have a guidance system for the signal source.

The scheme of action of the complex is as follows: the operators conduct reconnaissance of objects, having discovered them, they direct and land the UAV on the target or shoot a beacon on it. Then report the coordinates to the firing position. The specified square is shelled with ammunition, equipped with a guidance system on the signal. The range is limited by the capabilities of a mini-UAV, today it is within three to five kilometers.

The smaller the drone, the lower the probability of its detection. The weight and dimensions of the power plant, UAV control systems tend to decrease. For example, restrictions have already been entered into the DARPA program: the size of the device should not exceed 15 centimeters in height, length and width.

The benefits of using a microblah are obvious. Sharply increases the likelihood of destruction of objects with a minimum consumption of ammunition. The shelling of targets marked with beacons can be conducted from closed artillery and mortar positions with guided missiles.

The data of American researchers speak about the effectiveness of this scheme: in order to hit a conditional strong point of a reinforced motorized infantry platoon with tanks deployed in trenches and BMP trenches, weapons and dummies, it took 2600 artillery 155-mm projectiles with shock and timer fuses. In this case, only about half of the tanks and infantry fighting vehicles were disabled. The direct hit of a large-caliber projectile induced at the beacon is guaranteed to destroy the target. The miniaturization of UAVs when applying the proposed scheme makes them more dangerous.

Ctrl Enter
Noticed oshЫbku Highlight text and press. Ctrl + Enter
We are
US military needs drones that flap their wings more activelyArtillery of the XXI century
51 comment
Information
Dear reader, to leave comments on the publication, you must to register.