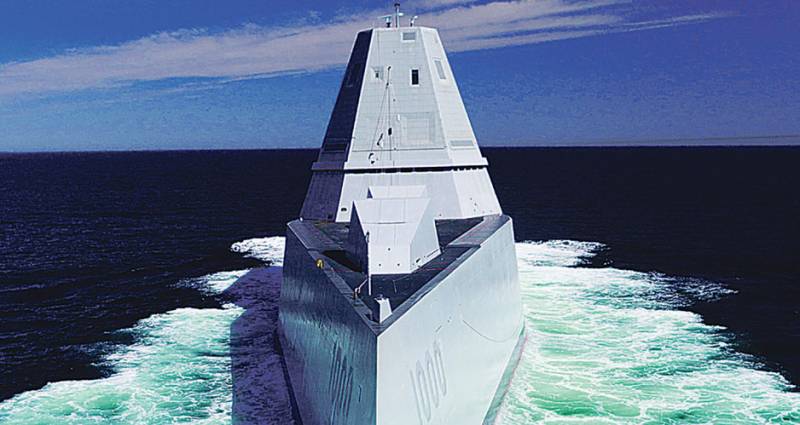 The newest US destroyer, USS Michael Monsoor DDG-1001, of the Zumwalt project, left the shipyard in December and began the first stage of sea trials. Shipbuilders and crew check the work of the main systems.

The ship is named in memory of the naval officer Michael Monsure, who died in Iraq in 2006. He was part of the joint squad "sea lions" and the local military. Monsur covered with his body a grenade abandoned by the rebels. At the cost of life, an officer saved three special forces and eight Iraqi soldiers. In April 2008, George Bush signed a decree awarding Michael Monsur a posthumous Medal of Honor. During his lifetime, he managed to get for service in Iraq Bronze and Silver Stars.

This is a business of Americans, but it was hardly worth the name of such a hero to call a ship, released on a deliberately failed project (“Special Troika”). American sailors have already called the destroyer "iron", not only because of the specific appearance, but also because of, to put it mildly, mediocre nautical qualities.

By some irony, almost simultaneously with the announcement of the start of sea trials of the second destroyer of the Zumvolt class, it became known that the American military was going to abandon the railguns - electromagnetic guns, which were to become the main weapons these ships. Under them, it was, in fact, designed.

A working model that could be passed to military trials was never created. But riveted it for 12 years. The venture cost 500 millions of dollars, but the project was never brought to the desired parameters. Most likely it will be closed.

For the sake of objectivity, it should be said that the railgun, commissioned by the US Navy, works, only instead of ten shots per minute given by the military, it provides only four. In addition, there is information about the extremely low resource of the main parts of the installation, although the developers hide the information on the number of applications of the gun before the replacement of components.

However, if the railgun corresponded to the technical requirements of the military, it would have been issued on the mountain, its use on the Zumvolta would be extremely problematic due to the insufficient power of the ship's power plant. In order to fire, it would be necessary to de-energize all the other systems of the ship at that time, in effect making it blind and deaf.

But as we see, now this problem is irrelevant. But the question arose: what, in fact, is to arm the “ship of the future”?

Toothless Thunderstorm of the Seas

Strictly speaking, the replacement of laser or electromagnetic guns with traditional rocket and artillery systems raised the question of a radical revision of the entire project, but there was already no time or money for this. The “destroyer of the future” project has already cost 22 billion dollars to US taxpayers. The cost of Zumvolt itself is seven billion, more expensive than the Nimitz aircraft carrier, the last to be commissioned by the US Navy, and it was absolutely impossible to add anything else.

Therefore, the weapons system was sculpted from what was in a hurry. As a result, in the arsenal there was no place for anti-ship missiles, which are mandatory today for projects claiming universality. The destroyer can oppose competitors only artillery systems caliber 155 millimeters - powerful, but not enough speed (10 rounds per minute).

In addition, Zumvolt has twenty TLUs for Tomahawk cruise missiles, of which there are 80 units in ammunition. Was it worth it for this fuss? After all, let's say, upgraded Ohio-class nuclear submarines carry the Tomahawk 154, and the cost of their conversion is about four times less. According to the technical assignment, one of the main functions of Zumvolt is anti-missile and air defense. These problems are supposed to be solved with the aid of the RIM-162 ESSM SAM, which have a range of up to 50 kilometers and an interception ceiling of 15 kilometers, which is clearly not enough for such a powerful ship, especially to solve the tasks of covering an aircraft carrier group or region.

In addition, it is worth noting that radar systems provide only half of the declared in the technical requirement of the military capacity. As for security, there is no armor on the destroyer. It has Kevlar reinforcement according to the citadel principle, which is able to trap shards. But from the Russian missiles with armored warheads, it will not save. The launchers are not protected and can be damaged even from a large-caliber machine gun, which, for example, is armed with some boats of Somali pirates.

The main highlight of the destroyer is its "invisibility" or rather, low-visibility for radio observation equipment, achieved thanks to the special geometry of the hull and superstructure - extremely smooth, tapering upward, betraying the ship futuristic look, and a special absorbing coating. Thanks to this, Stealth technology and a ship with a length of 183 meter looks like a one-mast sailing ship on the radar. For the same purpose, the destroyer received a ramming stem, which should "cut the wave."

The Zumvolt contrasts strongly resembles casemate battleships of the monitor type during the Civil War in the United States and with similar nautical qualities. It is noteworthy that the former chief of staff of the US Navy, Admiral Gary Rafad back in the 2008 year, when the construction of the first ship was just beginning, declared its uselessness. He pointed to poor seaworthiness, poor security, as well as the absence of the weapons under which the project was started. However, the leadership of the US Navy and the structures that lobbied for the project had their reasons.

After repeated delays and scandals, the head Zumvolt officially joined fleet October 15, 2016, however, according to official statements, his participation in military operations is possible no earlier than 2018. But this is doubtful, given the numerous ship failures that occur literally from scratch.

The real, tactical niche of this ship is still a mystery. If we consider these destroyers as just a platform for launching Tomahawks, a kind of modern gunboat, then all of their innovative, expensive options seem to be clearly superfluous. A more logical and understandable option can be considered the Zumvolt as a floating laboratory in which advanced technologies will be tested and run-in. One such "platform" is more than enough. But as we see, the American defense industry intends to execute the minimum program and commission three such ships, and initially it was planned to build the 32. The third sample, the Lyndon B. Johnson, was laid a year ago at the Bath Iron Works shipyard. He will be the last in the Zumvolt series. Why replicate the apparently raw and unfinished design three times? The answer is clearly not in the military or scientific spheres, but on a purely commercial plane.

Ctrl Enter
Noticed oshЫbku Highlight text and press. Ctrl + Enter
We are
Meet Zumwalt! The invisible destroyer of the US Navy will be released into the sea next springDestroyers of the type Zumwalt. On the current state of the ships of the future
64 comments
Information
Dear reader, to leave comments on the publication, you must to register.