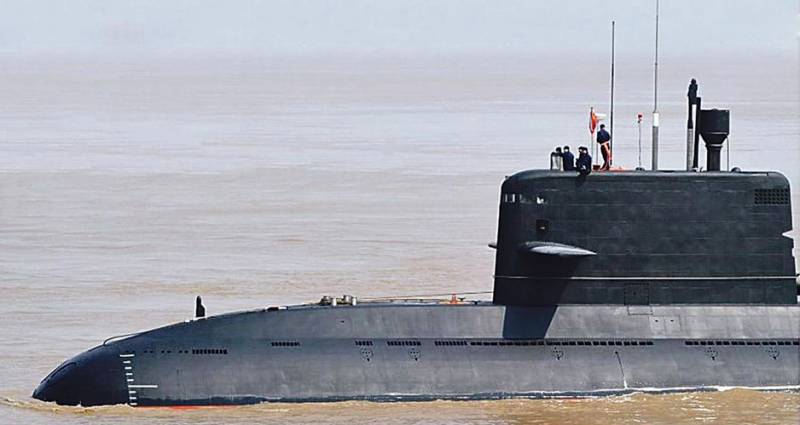 Having accumulated experience in the design, production and operation of non-nuclear submarines, China began their promotion on the world market of naval equipment. Germany, the Netherlands, Russia, France, previously considered world leaders in submarine-shipbuilding, have already felt a certain discomfort from the appearance of a new player.

And the fact that he is very gifted and initiative, it became clear after Pakistan and Thailand chose the export Chinese submarines of the S20 family to arm their navy. And this is just the beginning. Continued to be sure to follow.

China Shipbuilding Industry Corporation (China Shipbuilding Industry Corporation - CSIC - “At the origins of the great expeditions”), concluding contracts for the supply of non-nuclear submarines to Pakistan and Thailand, intends to consolidate its positions and bring to the world market the naval equipment of diesel-electric submarines of other 200 displacement projects, 600 and 1100 tons. The corporation, based on the experience gained in recent decades in the design and production of diesel-electric submarines for the PLA Navy, is convinced of the attainability of the goal.

The first buyer was Pakistan, which has close ties with the Middle Kingdom through the MTC. Eight S20 diesel-electric submarines created on the basis of the 041 Yuan project, which in turn is an improved 039A, to some extent counter the advantage that the Indian Navy had in the recent past in terms of the number of underwater fleet. The first four boats will be built in China and will begin to be delivered in 2022. The remaining four will be laid at the facilities of the Pakistani company KSEW (Karachi Shipbuilding and Engineering Works) in Karachi.

And then we will see what India will do with the P-75I program for the creation of promising submarines, which has been a bit over the edge, which has not yet been finalized. Islamabad, presumably, will act depending on the further steps of New Delhi, which has prodinamised the Russian Amours and staked on the French Scorps.

Another customer was the Thai Navy who signed with the Chinese Shipbuilding and Offshore International Company (CSOC), an international trading division of CSIC, a contract worth 13,5 billion Thai baht (390 million) for supply to 2023- m diesel-electric submarines project S26T. This is also an export version of 039B / 041 projects. Over the next few years, the Thai Navy plans to order two more S26T submarines in order to have three boats of this type as part of 2026. With the implementation of the plan, their total value will be 36 billion Thai baht.

After 60 years of designing and building submarines such as Romeo, Ming, Song and Yuan (Romeo, Ming, Song, Yuan), a CSOC spokesman said China is ready for independent R & D in this area, including and the production of the full range of necessary equipment, sensors and weapons. 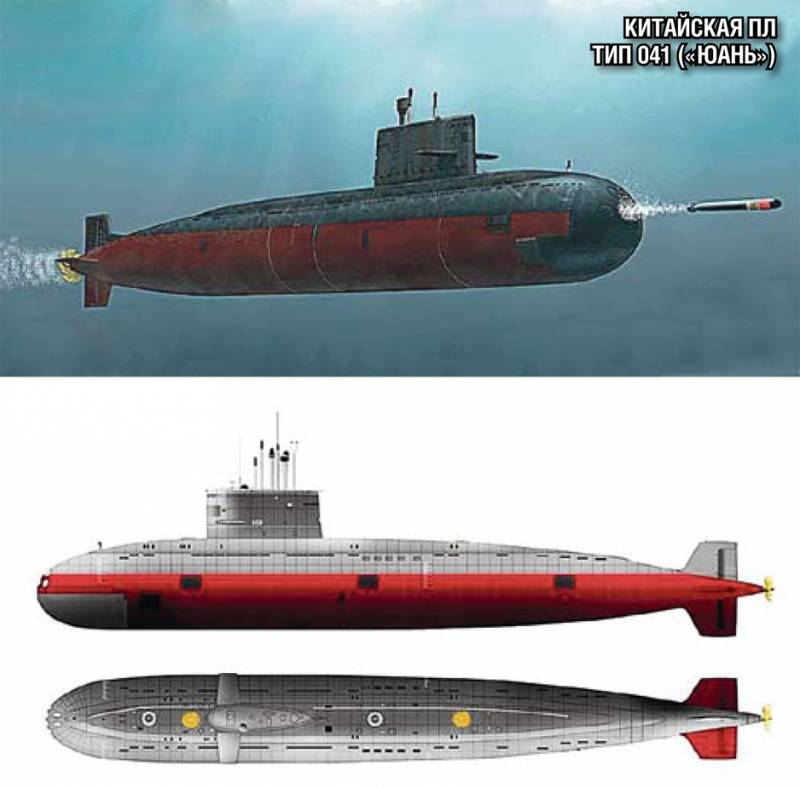 The CSIC claims that the S20 and S26T platforms are entirely national projects based on the experience of creating Yuan-type submarines, the first of which was launched at the shipyard in Wuhan in May 2004. As for the general appearance, the boat repeats some of the design features of Russian Kilo-class diesel-electric substations, including a drop-shaped hull with a characteristic hump and a large vertical rudder, although the stern part resembles a configuration of a Song submarine (039 project). Later samples are equipped with side sonar antennas and, possibly, towed. 13 and 14-I boats, images of which are in open sources, have modified hull contours to improve acoustic characteristics.

Export submarines can be equipped with an air-independent power plant (VNEU) of Chinese design, based on the technologies used in the project "Yuan" for the PLA Navy, said a representative of CSOC. However, he refused to specify the features of the installation. Experts believe that the modern technology of the Chinese VNEU is based on the closed Stirling cycle using liquid oxygen and diesel fuel, and was developed at the CSIC 711 research institute.

Due to the closed nature of new developments carried out by our eastern strategic partner, it is difficult to assess the technological level of VNEU. Western naval experts believe that it still falls short of the requirements of the TK. This may be evidenced by the ongoing national program to stimulate scientific and technological innovations, including in the field of propulsion systems for aviation and offshore platforms. It is also possible that the Chinese are experimenting with fuel cell technologies and may develop lithium ion batteries for a new generation of submarines.

According to official data S26T has a displacement of 2550 tons, length - 77,7 meters, width - 8,6 meters, height - 9,2 meters, crew - 38 sailors, although the internal volume of the boat can accommodate up to 46 people. The maximum submerged speed is 17 nodes, the maximum immersion depth is 300 meters. When the batteries are operated, the range exceeds 260 nautical miles (460 km), and with VNEU - 768 miles. With combined surface and scuba diving, the range reaches 8000 nautical miles. The maximum duration of stay at sea is 65 days.

The durable S26T case is divided into six compartments. In the first are ammunition and torpedo tubes, as well as a nasal rechargeable battery. In the second - the system of command and control, console weapons. In the third compartment are the crew quarters and the aft battery pack. Diesel generators, electronics power supplies, auxiliary mechanical systems are located in the fourth. VNEU with the Stirling cycle and the tank with liquid oxygen - in the fifth compartment. The main motor and power drives are in the sixth.

In the event of an emergency or failure resulting in flooding, the crew can be saved using special systems. If the submarine lies in shallow water, it leaves through torpedo tubes or rescue chambers. The emergency boat can be reached using deep-water vehicles or cameras that dock to two dock chambers, one of which is in the front of the first compartment, and the other in the stern of the sixth. There are also two radio frequency emergency buoys.

The company CSOC is promoting the market three more export versions of diesel-electric submarines. These are small 200-tonne MS200 and 600-tonne boats, 1100-tonne average. All of them have a single-case droplet-shaped design and a planned life of 25 years. The main customers, believe in the company CSOC, just in the Asia-Pacific region, which has always been a priority for the major players in the market of naval equipment.

According to the CSOC, the MS200 boat was designed for its use by special operations forces. It has a length of 30 meters, a width of 3,6 meters, a height of 4,4 meters. It can be serviced by a crew of six and carry eight fully equipped MTR fighters, as well as their special equipment. The maximum speed is eight knots, the range in a submerged position is 120 nautical miles, in the surface position 1500 miles. Autonomy - 15 days. Extreme depth of immersion - 200 meters. On the submarine there are two torpedo tubes of caliber 533 millimeter. There are sets of active and passive sonar sensors. The durable case is made of 921A steel, equivalent to the French 60HLES and the Russian AK-25 48-OT3. It is divided into three compartments.

Cabins are located on the upper deck of the first compartment. One hundred cells of a lead-acid battery and a ballast tank are located on the bottom. In the second compartment is the command module, which is also divided into two decks with three multifunctional consoles, five integral centralized racks, a laser inertial navigation system and a gyroscope, other devices (on the top) and equalizing tanks (on the bottom).

The boat 600T is designed for regional naval forces, which have little or no experience with submarines. With the length of 50 meters, the width of the 4,6 meter and the height of the 5,6 meter, it can perform a wide range of tasks, including patrolling, reconnaissance, conducting anti-ship and anti-submarine wars, that is, it is multipurpose. Operated by a crew of 15 people. Armed with four nasal TA caliber 533 millimeter and 10 ammunition heavy torpedoes, wire-guided, or other weapons.

600T has a maximum immersion depth of 200 meters, travel speed in the submerged and surface positions of 15 and 9 nodes, respectively. The submarine's maximum cruising range is 400 nautical miles, with a duration of up to 20 days (from VNEU).

The robust housing is divided into four compartments. The first one contains the main battery, the crew cabins, the saloon and the galley. In the second - two systems: command and control and combat control. Diesel generators and auxiliary mechanisms are installed in the third compartment. VNEU, electric motor, shaft, gearbox are placed in the fourth.

The robust S1100T is also divided into four compartments. In the first, the crew and front battery are placed. Command and control system is in the second. Diesel generators and auxiliary mechanisms are located in the third compartment, while the fourth is placed under the VNEU, electric motor and auxiliary devices.

In a Thai tender, CSIC won a victory over well-known foreign participants, including the South Korean Hyundai Heavy Industries with a HDS-500RTN boat, Rosoboronexport with Varshavyanka, and the German Thyssen Krupp meerin system. Krupp Marine Systems with samples 209 / 1400mod and 210mod, the Swedish "Saab" with the latest A26. Western experts note that with a growing portfolio of submarine projects focused on a wide range of tasks, CSOC is well positioned to meet the demands of regional customers, especially those who cannot accept Western offers due to high costs or for political reasons. The company is also ready to offer training, infrastructure support and technology transfer to potential customers. For example, Thailand is promised assistance in strengthening the national shipbuilding industry, as the country's Navy plans to expand the Mahidol Adulyadej shipyard in Sattahip province for SEPNXXXT type SSD operations in the Gulf of Thailand. It is expected that another shipyard will be deployed on the southwest coast of Thailand with the assistance of a Chinese company, but in the Andaman Sea.

Victory in the tender increased the confidence of the Chinese shipbuilders in promoting their submarines on the world market. Moreover, CSIC states that at least eight countries of the world - Algeria, Bangladesh, Venezuela, Egypt, Cuba, Libya, Myanmar, and the United Arab Emirates are interested in Chinese submarines. But all these countries are Russia's partners in the field of military-technical cooperation.

Ctrl Enter
Noticed oshЫbku Highlight text and press. Ctrl + Enter
We are
Russian Navy. Sad look into the future. Part of 4. "Halibut" and "Lada"Diesel-electric competitor from China: S20 submarine
28 comments
Information
Dear reader, to leave comments on the publication, you must to register.