Surrender to the mercy of the rich 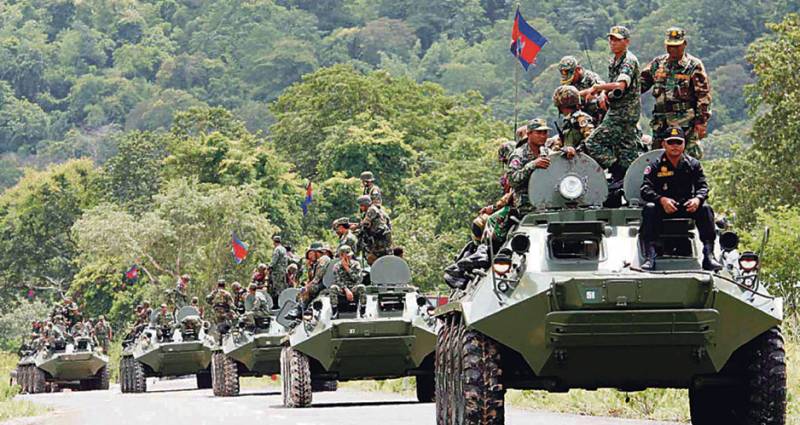 Three decades ago, Laos and Cambodia were considered socialist countries. Their “elder brother” was the USSR, the “middle one” was Vietnam (“Hanoi's Ark”).

Cambodia survived the dictatorship of Pol Pot with the total genocide of its own population, the invasion of the Vietnamese army, a long civil war, the overthrow and restoration of the monarchy. The internal situation has now stabilized, but it is one of the weakest economically and militarily ASEAN countries.

The army is very archaic, no own military-industrial complex. The military potential of Cambodia (especially the Air Force and Navy) is much lower than that of the main potential enemy - Thailand, with which there are serious border conflicts ("Siamese sly fellows"). However, a special relationship with Hanoi seems to guarantee security.

The armed forces of Cambodia are equipped mainly with the old Soviet weapons, deliveries from Eastern Europe and Vietnam continue to this day. In recent years, the import of machinery from China has resumed, its influence on the country is gradually increasing.

In addition to Chinese MANPADS, all weapons are very outdated.

Marines include 7 infantry and 1 artillery battalions.

Of the ASNEAN 10 countries, only Brunei is inferior to Laos in terms of its military potential. Due to the extremely low solvency, Vientiane is unable to acquire any modern weapons. In the presence of only a small amount of Soviet equipment obtained from the USSR and Vietnam, as well as the long-outdated American in even smaller quantities, plus some weapons from the Middle Kingdom. While Laos remains mainly in the sphere of influence of Vietnam, but Chinese penetration into the country is growing.

The ground forces are divided into 4 military districts, which include 5 infantry divisions and several separate regiments and battalions.

In addition to the Igla-1 MANPADS, all the equipment of the ground forces is very outdated, the level of maintenance is low, so the above quantitative values ​​are very conditional, there is almost no practically operational equipment.

Vietnam is trying to keep Cambodia and Laos in the sphere of its influence, but China is slowly but surely moving it aside. The military and economic potential of Beijing and Hanoi is incomparable, for the poor and the weak Phnom Penh and Vientiane is a decisive factor. It is Cambodia and Laos, along with Myanmar, becoming the main conductors of the interests of the PRC in Southeast Asia.

Ctrl Enter
Noticed oshЫbku Highlight text and press. Ctrl + Enter
We are
Summit Russia - ASEAN: Friendship and HydrocarbonsSiamese commandos
14 comments
Information
Dear reader, to leave comments on the publication, you must to register.