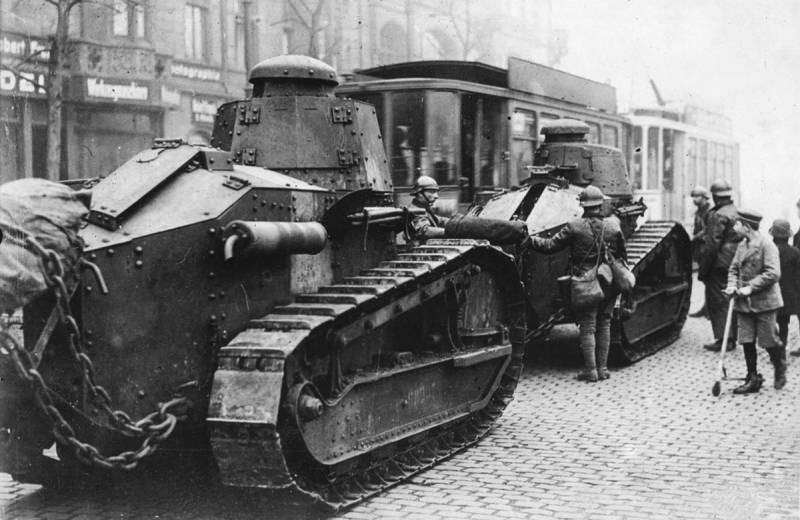 95 years ago, 11 January 1923, the French and Belgian forces began to occupy the Ruhr - an industrial area in Germany, which mined more than 70% German coal and smelted over 50% iron and steel. The reason for this was the statement of the German government that Germany is not able to pay reparations to France and Belgium imposed on it under the terms of the Versailles Peace Treaty, despite the fact that in 1921, the amount of reparations was significantly reduced - from 226 to 132 billions of marks in gold.

60 thousand soldiers with artillery and were brought into the Ruhr tanks. Later, the occupation contingent increased to 100 thousand. Berlin ordered the Reichswehr to show no resistance and leave the Ruhr without a fight, but at the same time declared a complete refusal to pay reparations and called on the people of the region to a non-violent "rukampfu" - the struggle for the Ruhr. “Rourcampf” was expressed in a boycott of the invaders and an indefinite general strike. The government began to provide material support to the strikers, and since the state treasury was empty, they had to print unsecured paper money in large quantities. As a result, already high inflation took on a completely insane character.

The French began to arrest and deport instigators of strikes from the occupation zone. In response, the protests became more radical. The acts of sabotage and sabotage at the enterprises and on the railways began, in some places there were armed clashes between military patrols and Freikor guerrillas. The invaders were captured by the captured partisans and saboteurs.

In the autumn of 1923, realizing that the policy of passive resistance does not bring anything but hyperinflation, the government of Chancellor Marx announced the termination of the Rurkampf, but still refused to pay reparations. Then the French organized a puppet "Rhine Republic" in the occupied territory, which, of course, declared its recognition of reparation payments. But nobody recognized this republic itself, except France and Belgium.

"War of nerves" was delayed, both sides suffered losses. The occupation of the Ruhr was very expensive for the French and the Belgians, but for the Germans the loss of this vital region was even harder: the German economy collapsed, the money was worthless, the country was starved. And at that moment the USA came to the aid of Germany. American diplomat George Daws in the summer of 1924 put forward a plan for resolving the conflict approved by President Coolidge, consisting in another relief of the reparation burden.

According to this plan, the period of reparations stretched for several decades with an annual payment of only one billion marks in the first period, and sometime later, after the stabilization of the German economy, the amount of payments was to increase to two billion. At the same time, the USA provided Germany with a large low-interest loan for initial payments. For Germany, Daws’s plan was salvation, and the French and Belgians, seeing no other way out of the impasse, also agreed to accept him after some time.

In July, the French-Belgian forces left the Ruhr, 1925, and before that, the “Rhine Republic” ceased to exist, the president and government of which emigrated to France. In 2,5, several dozen French soldiers and 137 Germans, mostly members of underground partisan groups killed in gunfights or executed by military tribunals, were killed in the region. In conclusion, we can say that the Nazis who came to power in Germany immediately and outright refused to pay reparations, the debt for which was still more than half of the assigned amount. But this did not cause the re-entry of troops.

On the screen saver - French tanks on the street of the capital of the Ruhr - the city of Essen. 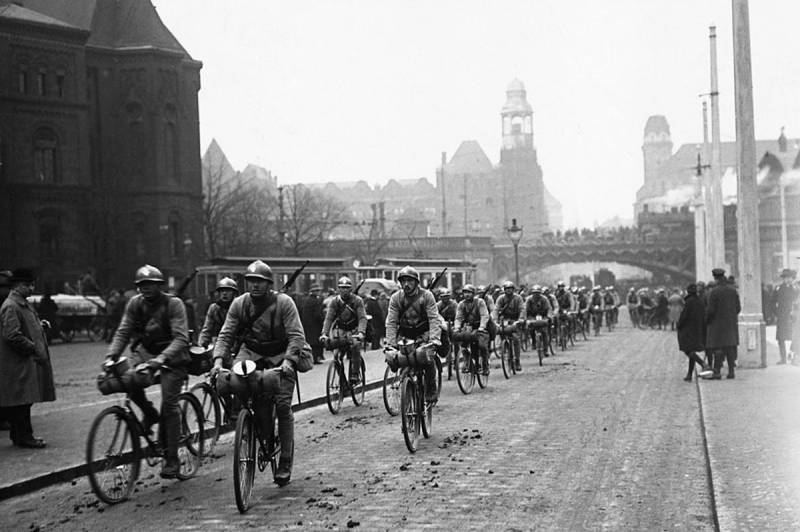 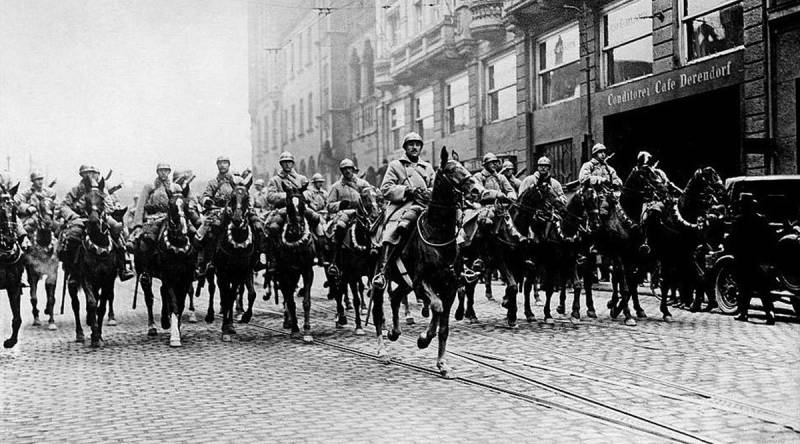 The French in January 1923 come into the Ruhr.

The 1923 banknote, printed in the autumn of 100, of billions of marks is the result of hyperinflation provoked by the Rurkampf.
Next are the Germanic 1923-24 cartoons dedicated to the occupation of the Ruhr. Fantasy German caricaturists was not to occupy. And it is not surprising that such rabid propaganda greatly contributed to the rapid growth of the popularity of the Nazi party. 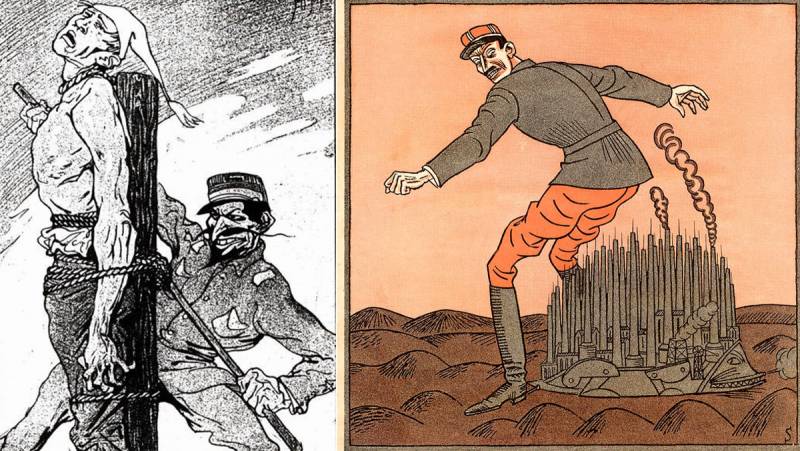 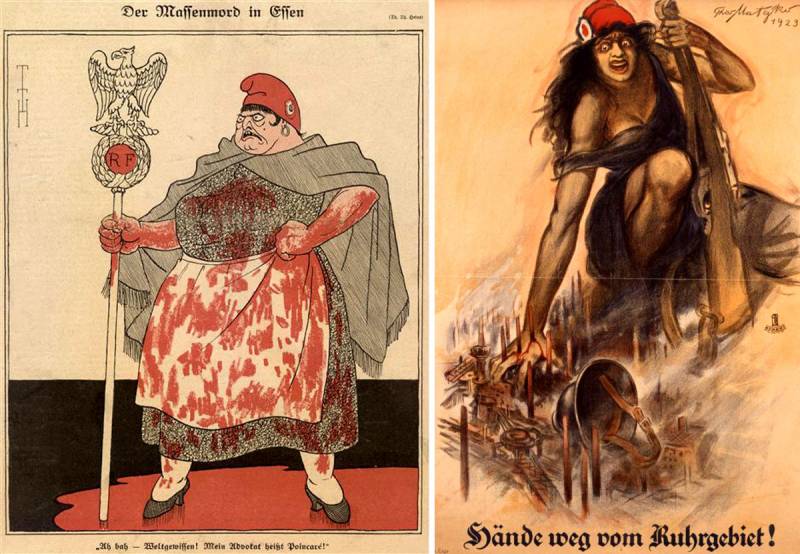 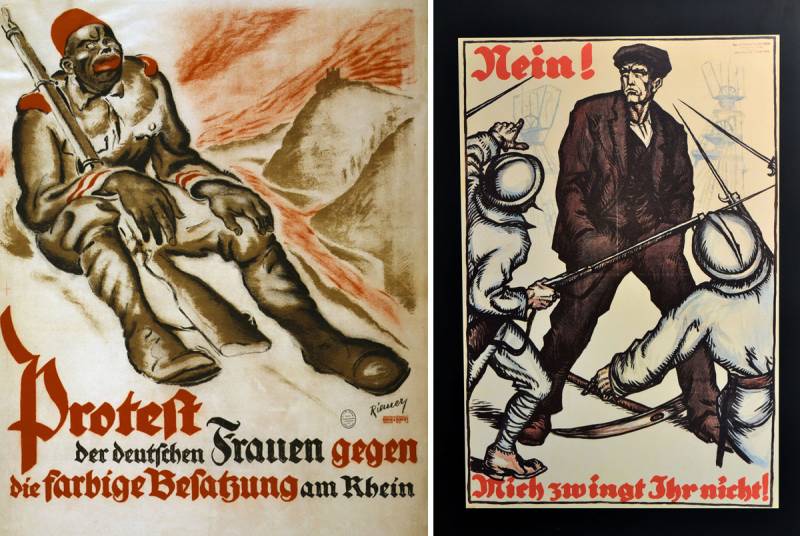 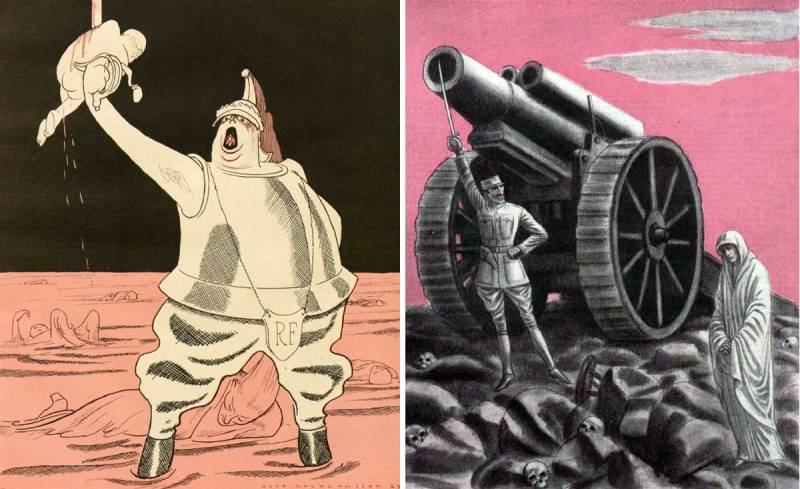 Ctrl Enter
Noticed oshЫbku Highlight text and press. Ctrl + Enter
We are
Unleashed a war - pay!Germany on the way to the Third Reich: Ruhr conflict and the Dawes Plan. Part of 2
7 comments
Information
Dear reader, to leave comments on the publication, you must to register.