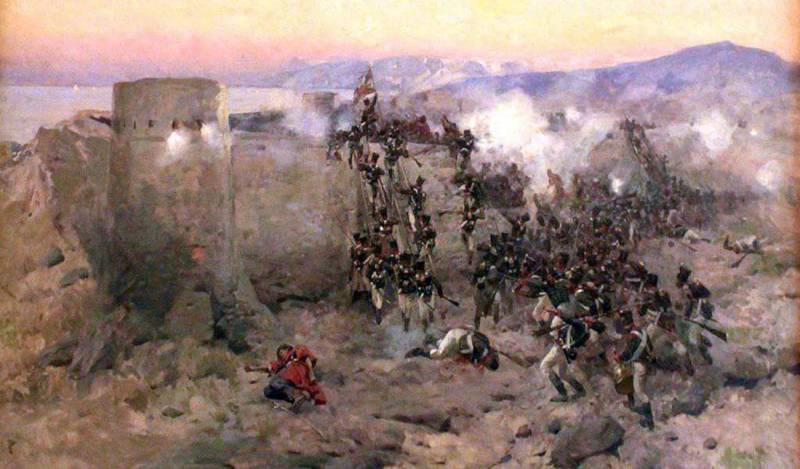 Exactly 205 years ago, January 13, 1813, the Russian army, on the orders of Field Marshal Kutuzov, forced the Neman into Europe, which ended a year later with the capture of Paris and the fall of the Napoleonic empire. And on the same day, a Russian detachment under the command of General Pyotr Kotlyarevsky stormed the Persian fortress Lenkoran, located on the banks of the river of the same name off the south-west coast of the Caspian Sea. The fall of Lankaran forced the ruler of Persia, Feth-Ali Shah, to begin peace negotiations that ended the nine-year Russian-Persian war. Following the results of this war, Azerbaijan entered the Russian Empire, and Lankaran became the extreme point of Russia's advance to the South in the South Caucasus.

Kotlyarevsky's detachment numbered only 1760 soldiers and officers with several field guns and one three-pounder mortar removed from the gunboat. And the Lenkoran garrison consisted of approximately 4000 regular sarbaz soldiers and militias under the command of voivode Sadikh Khan. The fortress was surrounded by a stone wall with towers, additionally reinforced from the back by earthen dusting, and outside it was girded by a moat up to four meters deep, partially filled with water. Despite such a disposition, Kotlyarevsky was confident that he would manage to seize the fortification.

But first he sent Sadih Khan a letter with an offer to surrender, to which he received an arrogant refusal. Then the Russians began an artillery bombardment that lasted two days, but gave almost no results. The cores of the field guns did not penetrate the fortress walls, and the mortar quickly ran out of ammunition. Since the walls could not be destroyed, Kotlyarevsky ordered Lankaran to attack in the “classical” way - with the help of assault ladders.

Knowing that the enemy has a significant numerical superiority, the general threw all his forces onto the assault — the 14-th Georgian Grenadier, Trinity Infantry and 17-th Jäger regiments, which attacked simultaneously from three directions. From the fourth the fortress was covered by the river. Only 80 non-combatant men and artillery servants remained in reserve. Kotlyarevsky announced that under no circumstances would there be a last-minute signal, and anyone departing without an order would be immediately shot on the spot, "regardless of rank or rank."

At five o'clock in the morning, under the cover of the night darkness, the assault columns began to attack. Having filled the ditch, the soldiers climbed the walls, despite the frequent firing and hand grenades flying from above. When the commander of the Georgian regiment was killed, Lieutenant Colonel Ushakov, Kotlyarevsky, who personally participated in the assault, began to climb the stairs himself, inspiring the soldiers with his example. According to the Azerbaijani historian Timur-Bek Bayram-Alibekov, "the soldiers climbed the walls, as if unaware of the danger threatening them, clutching at the muzzle of enemy guns and either died at point-blank shots or were dragged by the enemies themselves onto the crest and died there in an unequal melee. "

Rising to the wall with a saber in his hand, Kotlyarevsky almost immediately got a bullet in the leg, and then two more - in the face, one of which knocked out his right eye, and the second crushed his jaw. The general was considered dead, but that did not stop his fighters. The turning point in the battle came when the grenadiers managed to clean up a section of the wall and seize the guns standing on it, which they immediately turned and opened fire on the Persians with a canister. Soon all three forkov walls were captured, and melee moved to the fortress courtyard.

In this battle, the Russians prevailed. Sarbazov pushed aside to the wall adjacent to the river. Most of the defenders of Lenkoran died there, because the Russians, infuriated by the heavy losses and death of the commander, did not take prisoners, but finished off the wounded. Part of the Sarbazov tried to escape, jumping from the wall and swimming across the river, but they all drowned in icy water or froze on the opposite bank. After six hours, the battle for Lankaran ended. The garrison died in full force, including Sadih Khan. 3737 corpses of its defenders were found in and around the fortress, the number of drowned bodies is unknown. The winners got eight English-made cannons and two banners.

Their own losses were 341 killed and 609 injured, that is, more than half of the original composition. And Kotlyarevsky miraculously survived and recovered, despite the primitiveness of the then medicine. Because of the consequences of severe injuries, he had to retire, but after that he lived in retirement for another 37 years. For the capture of Lenkoran he was awarded the Order of St. George of the second degree with a star.

On the screen saver - a picture of the artist FA. Rubo "Storming Lenkoran".

The plan of the Lenkoran fortress at the time of the assault and the portrait of General Kotlyarevsky after injury.

Ctrl Enter
Noticed oshЫbku Highlight text and press. Ctrl + Enter
We are
"Nothing can resist the Russian bayonet." As 2 thousand. "Miraculous heroes" Kotlyarevsky crushed 30-thousand. Persian army and stormed LankaranPages of history: He was called the second Suvorov
19 comments
Information
Dear reader, to leave comments on the publication, you must to register.