The strategy of circular strangulation. Erdogan "strangles" the Kurds, and Trump - Erdogan?

January 10 2018
0
The antiterrorist coalition, led by the United States, announced its plans to create border “security forces” in the north of Syria. Under the flag of the "Syrian Democratic Forces" and a single whole several tens of thousands of soldiers (mostly Syrian Kurds) will unite. The Kurdish support plans initiated by Washington did not like the Turkish president. Mr. Erdogan has already promised to "strangle this army." Now the answer is for Trump. 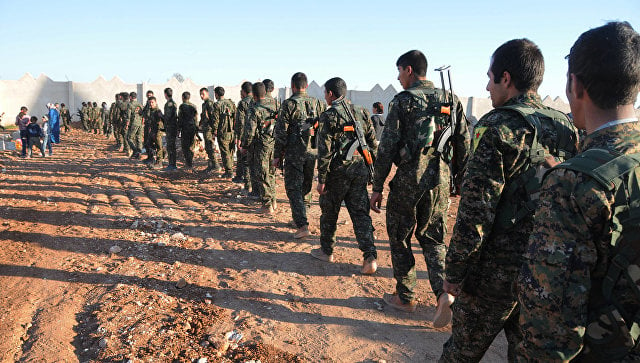 The Kurds in the region are counting on American support and are getting it. Such an alignment in the future leads to the strengthening of the Kurds near the Turkish border, which is fraught with great problems for Ankara, which has rather tense relations with its own Kurds. Revitalization of the Kurds will inevitably lead to their consolidation in the future. This Mr. Erdogan does not want to admit. But the Kurds themselves and their American sponsors have different plans.

The representative of the leadership of the party of the Kurds "Democratic Union" Sihanok Dibo said that the Kurdish administration in the north of Syria hopes for the support of an international coalition led by the United States. Such support will be needed by the Kurds in a military conflict with Turkey in the Afrin area. “First, we believe in our people, believe in all Syrians living in Afrin, - сказал member of the party leadership. “But I don’t think that the international and Arab coalition led by Washington will be inactive if something like this [clash with Turkey.” - O. Ch.] Will happen.

Thus, the Kurds made it clear that they are counting not only on themselves. Moreover, Mr. Dybo hopes for help not only from the USA. In the event of a conflict with Turkey, it would be good for Russia to intervene. According to Dibo, Moscow should intervene in the situation if Turkey strikes at Afrin.

Dibo's statement did not appear out of nowhere. Four days earlier, Turkish President R. T. Erdogan said that the Turkish army was ready to conduct operations in Manbij and Afrin. The operation will begin within a week.

Other statements were made later.

On January 16, the head of the Turkish General Staff, Hulusi Akar, speaking at the session of the NATO Military Committee in Brussels, saidthat Ankara will not allow the United States to arm Syrian Kurds from the Democratic Union and the People’s Self-Defense Forces (SNS). According to Akar, NATO should not make “distinctions” between “terrorist groups”. The fight against the SNA and the Kurdistan Workers' Party is as important as the fight against IG (banned in the Russian Federation) and other groups. The general expects that NATO will soon "abandon this error."

As Turkish media suggest, Ankara plotted to inflict massive air strikes on the positions of Syrian Kurds. The attacks will precede the land phase of the Turkish military operation in Afrin. According to the press, a massed airstrike will be sent to the 149 objectives of the "National Self-Defense Forces." Reports the edition about it "Haberturk". In general, Erdogan is not joking.

The targets are defined by Turkish intelligence, which monitors Afrin and surrounding areas from October 2017. TASS notes that UAVs and operational data from the field are used for observation.

Among 149 specific targets are not only stationary objects, but also vehicles. The first phase of the operation will take no more than six days. In parallel with the aircraft will be applied placed on the border of artillery. According to Haberturk, special forces units may be sent for final stripping on the territory.

In turn, the SNA fighters have already dug in and erected fortifications in nine regions of Afrin.

Turkey, too, does not hesitate: a large number of armored vehicles and artillery have been transferred to the border.

As a result, the city Afrin was surrounded on three sides: east, west, north. There is much room to retreat: Kurdish fighters can retreat to the south and southeast, to the territory controlled by Damascus.

The reason for the coming battle was the decision of the United States. The head of the public relations department of the headquarters of Operation Unshakable Resolve, Colonel Thomas Wil, said that the United States "will prepare the Syrian border security service" mainly from the fighters of the Forces of Democratic Syria (SDS). He pointed out that "the number of this organization will be approximately 30 thousand people." It will act just at the borders of Turkey. Then came statements from Ankara, “sharply condemning” the American initiative. The Turkish Foreign Ministry spoke, and then Deputy Prime Minister Bekir Bozdag added that "the United States is playing with fire." The opinion of Erdogan was quoted above.

In essence, the Turkish military operation has already begun: January 14-15 Turkish artillery held massive shelling of Kurdish positions in the region of Afrin.

The United States also does not hesitate: according to the "Northern Syrian Observer", last week, Washington delivered the party of MANPADS to the Kurdish YPG people's self-defense units in the canton Afrin. The deal between the Kurds and the United States was allegedly concluded secretly, not through the international coalition. The Pentagon and the coalition representatives did not comment on this information.

Obviously, we note that Washington is actively playing the Kurdish card in the region.

Military columnist for the newspaper Komsomolskaya Pravda, a retired colonel Viktor Baranets explained to the TV channel "RT"that Washington seeks to make an efficient army of the Kurds before Turkey launches an offensive against them.

“The Americans have suffered a strategic fiasco in resolving the crisis. Trump suddenly announced to the world that it was a coalition led by the United States defeated the "IS". This, of course, is not true. The main forces are defeated, and the Americans take under the wing of the shortages. They are preparing a new army, and the future war in Syria is still ahead. ”

“Everyone was sure that as soon as the conflict reached a direct confrontation, before the announcement that Turkey would send troops, the United States would refuse this initiative, that it was doomed to failure. But, as we see, the situation is developing further and further, the US is investing resources, confirming its readiness to participate in a forceful way in creating a new Kurdish enclave in northern Syria, "- quotes "Reedus" another expert, political scientist Vladimir Kireev.

As for the official position of Russia regarding the explosive situation around Afrin, Foreign Minister Sergei Lavrov считаетthat the US plans are not conducive to resolving the crisis around Afrin, because "this new one-sided ultimatum does not help calm the situation."

Americans, of course, are unlikely to listen to the opinion of the side against which sanctions are written out with bags and bundles. The American army is not at all acting in the coalition to give all the victory in Syria to the Russians and sacrifice their interests. Washington will advance its plan, and Mr. Trump’s perseverance in achieving goals will be truly great.

The opinion of Damascus is also known. Syrian President Bashar Assad threatened suppress US-sponsored forces, and even expel US troops from Syria.

His objections in the White House were also ignored.

It is not difficult to understand why the United States made a clear bet on the Kurdish forces and why Erdogan and his ministers were so alarmed.

Kurds today are perhaps the most efficient units in Syria. They are able to respond to both the terrorists and the forces of Erdogan. And yet ahead they have the prospect of creating their own state, against which the United States does not object, because it will mean the split of Syria and the infringement of Turkey, and then the Syrian ally of Iran, which also has its Kurds.

The current interests of the Kurds and the interests of the United States, therefore, temporarily coincide. If the Kurds are able to demonstrate their power on a large front, Washington will receive additional leverage on Turkey, and not Syria, as well as on Iraq and Iran.

Russia will not be left behind. American strategists are clearly trying to push Russia with Turkey and translate the scenario of the war in Syria into a different course.

Because of the American plan, which involves strengthening the Syrian Kurds and infringing on the interests of Turkey, difficulties will arise not only in the latter, but also in Russia, which is also in the hands of the United States. Moscow and Ankara will have to quickly resolve a number of sensitive issues relating to the actions of the Turkish military forces (interventionists) in Syria.

The situation is full of contradictions: the city of Afrin is located not far from Idlib and Aleppo, the airspace over which is controlled by the Syrian Air Force of Syria, supported by the Russian Aerospace Force. If Turkish air forces enter the battle, the risk of an unintended collision is high. To reduce the risk, it is necessary to coordinate all three parties: Syria, Russia and Turkey. At the same time, the parties should also discuss American support for the Kurds, which is clearly aimed at aggravating the situation in the region.

Neither the Trump government nor the congressmen in the United States are interested in ending the war in the Middle East and in preserving the integrity of Syria. Washington’s politicians do not object to the crisis in Turkey either: Erdogan, in their opinion, has long been beaten off.

Observed and commented on Oleg Chuvakin
- especially for topwar.ru
Ctrl Enter
Noticed oshЫbku Highlight text and press. Ctrl + Enter
We are
The attack on the Russian aircraft and the political situation in TurkeyTurkey against the Kurds. Is there a new phase of conflict ahead?
Add a comment
Information
Dear reader, to leave comments on the publication, you must to register.