January 17 2018
305
The absenteeism of the masses in Russia does not win, foreign experts say. Russians will not be lured to the polls by generous promises and promises of “prizes”, they cannot be overpowered by “creative” Kremlin propaganda, or drawn to ballots and ballot boxes by shrill “shows” on TV. The political apathy of the masses is great, and it is she who is the real opponent of Putin, who decided to rule the state for another six years. A low turnout at the polling stations will indicate a complete failure for the current owner of the Kremlin. 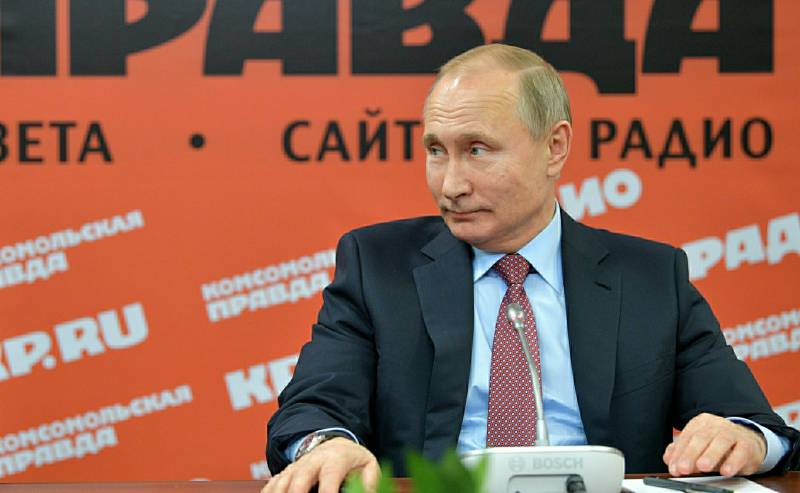 The president of Russia “will win the March 18 election,” columnist Frank Nienhuysen is confident. About this he writes in the newspaper «Süddeutsche Zeitung». Putin’s victory is a decided matter, because he “has long outgrown the state and parties.” In Russia, "apathy begins," says Ninghuizen.

But even if Putin’s victory is predetermined, it doesn’t make the election something calm. Especially for the Kremlin. Putin has a "new adversary" who is "difficult to control." He cannot be defeated by political persecution or exile from television. Who is this?

This opponent is “the unwillingness of Russians to vote at all,” the author believes. In addition, the refusal scenario is supported by Kremlin’s implacable critic Alexei Navalny: he called on his supporters to boycott the elections.

Kremlin strategists are “very creative” in their attempts to convince citizens to vote in the presidential elections to be held on March 18. First of all, the strategy is aimed at the younger generation, which, “having parted ways with state broadcasting,” has plunged into the abyss of a wide variety of online media. These are the young people who want to interest the Kremlin in elections. 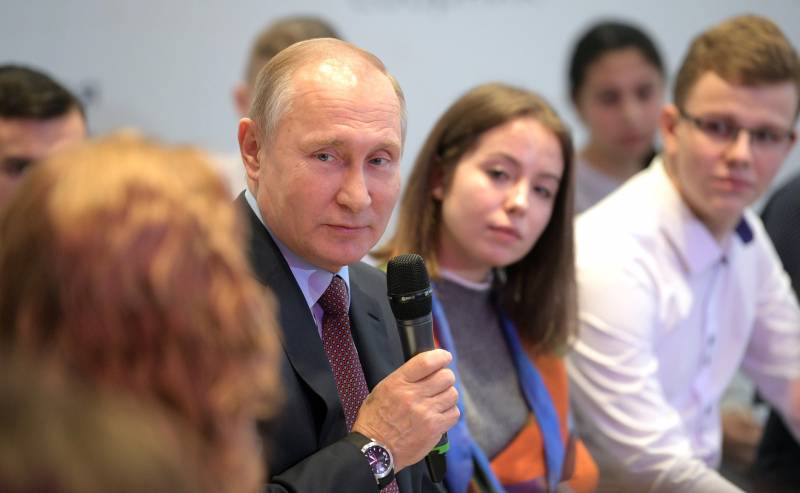 And what are the ways?

Zamanuha. Young people are trying to "encourage" to take selfies at polling stations, and then publish pictures on social networks. The best photos will be “awarded prizes,” the German writes. It is also assumed that on election day there will be “big family games”, quizzes and even football matches.

In fact, such actions have little in common with politics, the author notes. And where does the political interest of people in Russia come from - in the state, which itself “gives people the feeling” that they “should not worry too much about politics: after all, the state is already doing it”.

Hence the dilemma, points out F. Ninhuizen. Putin would like to count on more than 70% votes. Question: what are the 70 percent? Of the total number of citizens? But after all, “in his own country, the president has long become a man who is above all politics. Putin is a Supra-Politiker, a figure standing above the state, above the parties, the author believes. He is portrayed as a “national leader,” which means that the government, but not “Putin himself,” is constantly criticized for failure.

Today, the Kremlin wants to prevent apathy, which could well lead to election failure. The Kremlin is trying to create the impression that the president is supported by at least "half of the population."

The fight against absenteeism of voters, with their tiny interest in elections, is also characteristic of Western Europe. However, in Russia there is a feature: the apathy of the population is connected here with the habit of the Kremlin power to control everything, which means the absence of real competition. The road to state-owned media is blocked by many oppositionists. True, the author writes with irony, today Ksenia Sobchak, who is “against Putin,” can again speak on TV. But this is a cure for boredom: if there were no Sobchak, even fewer Russians would be interested in the elections.

With the majority of candidates who nominated themselves, the Russian people are familiar "for almost two decades," reminds Ninghuizen. “In addition to Putin,” liberal Grigory Yavlinsky will “play again” his role. The “nationalist Vladimir Zhirinovsky” will also perform. And only the Communist candidate, Gennady Zyuganov, this time “restructured”: from his party the non-party candidate P. Grudinin goes to the polls. This is the owner of the "fruit company" called "State Farm. Lenin ", said the German.

As for the former opposition, A. Navalny, the strongest protest vote, was simply expelled from the election race. In addition, the opposition in Russia is split. And someone will give a vote to K. Sobchak, someone to Yavlinsky, while others are boycotting the elections.

“Putin will reach the finish without a fight. As usual, ”laughs a foreign analyst at the Russian elections. 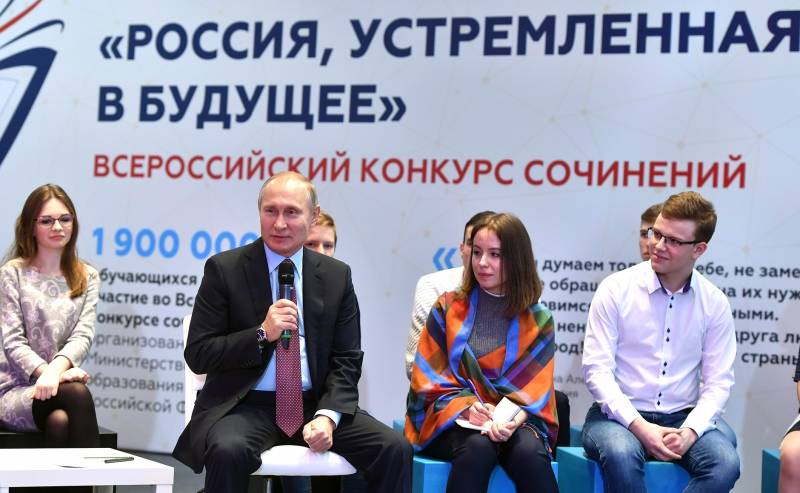 In the meantime, the support of the above-mentioned Pavel Grudinin is growing. Gradually, this man becomes a real counterweight to Putin, whom other forecasters have already recorded as winners "without a fight." It looks like the battle is still going on.

At the Central House of Writers, a 19th century mansion in the center of Moscow, a crowd came to listen to an 57-year-old speaker who ran a large part of his life at a former state farm. This is Pavel Grudinin, a communist candidate, one who challenged Vladimir Putin and “shook the election race,” writes Catherine Hill in Financial Times. And this new candidate has made the election more attractive “for apathetic voters” in Russia.

According to the pro-Kremlin VCIOM, today 7,6% intend to vote for Grudinina. This is a very high proportion; this is more than twice as high as the leader of the Communist Party of the Russian Federation Gennady Zyuganov had a month ago. 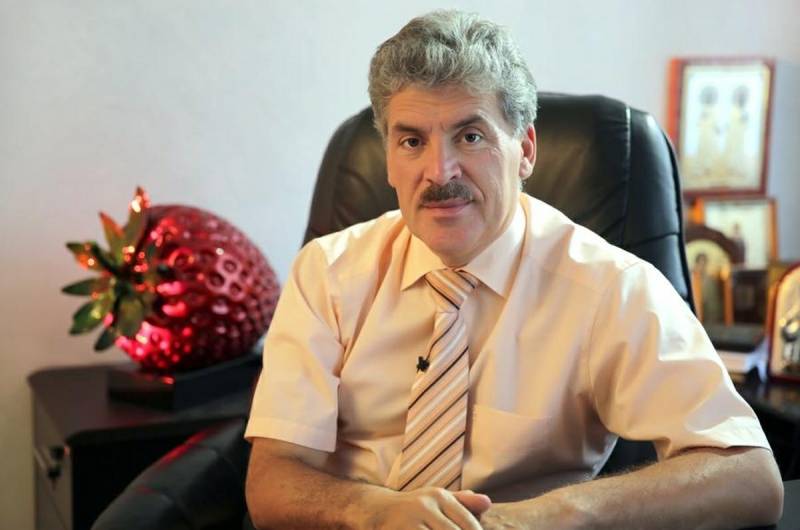 Mr. Grudinin, the author recalls, is not even a member of the Russian Communist Party, but his rhetoric attracted the attention of left-wing activists.

In his speech in the Central House of Writers, Grudinin condemned the theft of “public money,” Hille said, and called for the lie to stop: there is nothing to tell people how they “live a good life.” In fact, "they live badly"!

The candidate also called for free education and health care, and also for the retirees to "live in dignity."

Mr. Grudinin believes that you can live in Russia with dignity. On his farm, the average monthly salary is 78.000 rubles, and this is more than twice the average for Russia. He emphasizes that he himself lives in the same house on the farm as the ordinary tractor drivers. In short, the author sums up, he presents his enterprise "as a socialist utopia." And he wants all people in the country "to live as we live." “And this is possible,” considers Grudinin.

With a gray hair and a mustache, he “hardly resembles Joseph Stalin,” Hille writes further. And the popularity of Stalin in the people today is growing again, since many Russians, ignoring the Stalinist kingdom of terror and forced industrialization, want to see their homeland "modern and strong." Some of those who support Grudinina, indulge in nostalgia for the Stalin era.

However, Grudinin is not Stalin at all. Besides, he is a businessman, a capitalist. According to the Central Election Commission, Mr. Grudinin has earned an average of 26 million in the past six years. per year (in 26 more than once more than the income of its tractor-neighbors, ironically Hille).

Social networks are full of “wonderful discoveries”: they say, Grudinin had bank accounts in Austria, and his parent company had “connections with Roman Abramovich,” the oligarch and owner of Chelsea football club in the UK. Such Grudinin, of course, has little resemblance to the director of the “socialist cooperative”. However, the journalist continues, Mr. Grudinin has since "closed his accounts in foreign banks." As for the company previously controlled by Mr. Abramovich, this tycoon sold his stake more than a year ago.

Mr. Grudinin does not pay attention to such attacks, the author of the article points out.

His campaign today includes classic communist slogans (the nationalization of key enterprises in the banking sector, in the sphere of public services and telecommunications). At the same time, he calls for the improvement of the business climate, the fight against corruption and the restoration of the rule of law. Critics say that some of his positions are “stolen” from Alexey Navalny.

Other analysts suggest that the Kremlin deliberately supports Grudinin’s candidacy in order to neutralize the potential response to the removal of Navalny’s figure from the election. After all, Mr. Navalny called for a boycott of the elections and for street protests. And Navalny’s threat “is not like an empty bluff, considering that tens of thousands of activists are working in his numerous campaign offices,” said Alexander Ivakhnik, analyst at the Center for Political Technologies. “It’s possible,” the expert believes, “that the Communists’ nomination of a new and really attractive candidate, Pavel Grudinin, is connected with the authorities ’desire to reduce these risks by giving the election campaign a sudden intrigue.”

No matter how this sudden intrigue turned the whole campaign. With the rapid growth of Grudinin’s popularity and the transition to him not only by the communists, but also by a substantial part of the opposition electorate, the one that K. Sobchak presents as a caricature of the opposition, the Kremlin critic has some chances for victory.

However, everyone remembers how in 1996, Yeltsin won the election against Zyuganov. There is an opinion that Zyuganov eventually simply surrendered, not wanting to dispute his real victory. The broadest support of the extremely unpopular Yeltsin at that time by American political consultants and the White House is well known.

The Kremlin is now ponator in its own propaganda, American assistance is hardly needed. And the times are not the same: from the former friendship, the parties moved on to the war of sanctions. But are commentators in Germany right, and this time Putin will win again? And he will have 70%?

Why not? How many spits did United Russia endure? And nothing - behind a loud victory in the parliamentary elections.

Ctrl Enter
Noticed oshЫbku Highlight text and press. Ctrl + Enter
We are
Project "ZZ". "Communist" and "dreamer" against the "king"Pavel Grudinin: a real alternative to the election
305 comments
Information
Dear reader, to leave comments on the publication, you must to register.