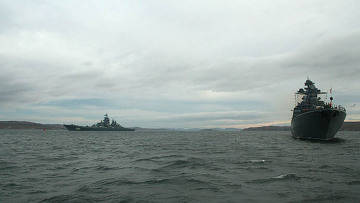 The joint exercise of the North Sea and air defense soldiers began on Tuesday in the Gryaznaya Bay of the Kola Bay as part of the command-and-staff exercise that takes place in the North navyThe Northern Fleet information support group reports.

Large-scale, submarine ships take part in the large-scale command and staff exercise, which began in the Northern Fleet on Monday, aviation, coastal, ground forces, units of the Russian Air Force. The exercises, which became the central event of the combat training of the fleet forces during the summer training period, are held under the leadership of the Vice-Admiral Nikolai Maximov, commander of the Northern Fleet, and will last until August 31.

One of the main objectives of the exercise is to work out the coordination of the actions of the fleet's heterogeneous forces among themselves and with other branches of the Armed Forces during joint military operations.

"On Tuesday, the air defense division carries out the loading of anti-aircraft missile systems and the deployment of personnel to the large landing ship Alexander Otrakovsky, which will deliver people and equipment to the deployment area to cover the fleet from air assault weapons," fleet.

Anti-aircraft missile systems deployed near the island of Kildin, from where they will conduct practical firing at the target missile.

This exercise is not the first time. Two years ago, the sailors of the Northern Fleet and the air defense soldiers successfully completed joint operations.