January 17 2018
3
In 1954, the Soviet army ordered the automotive industry to develop a promising ultra-high-performance vehicle suitable for use in the military as a multi-purpose vehicle. Having received a similar order, the Moscow Automobile Plant them. Stalin set to work and soon created several experimental machines under the general name ZIS-E134. The most famous design models numbered 1 and 2. At the same time, there was an equally interesting “Layout No. 0”.


In accordance with the requirements of the customer, the ZIS Special Design Bureau, headed by V.А. Grachev had to develop a four-wheel-drive four-wheel drive vehicle capable of driving both on the highway and in rugged terrain. Within the framework of the first stage of the ZIS-E134 project, which led to the construction of “Layout No. XXUMX”, some original ideas were proposed. Thus, the project involved the installation of wheel bridges at the same distance from each other. It was also proposed to use large diameter wheels with adjustable tire pressure. In combination with a relatively complex transmission, providing power output to all wheels, this made it possible to obtain sufficiently high characteristics of mobility and throughput. 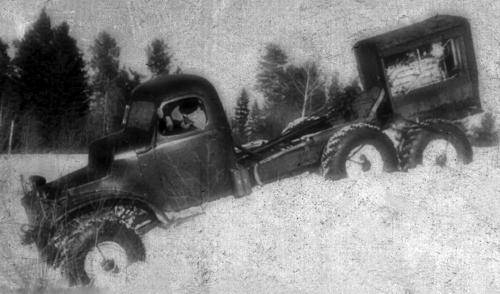 The prototype ZIS-E134 “Layout No. 1” was built in August of 1955, and after a couple of months it entered the field tests. At that time, a number of decisions used in the project were not sufficiently studied, which led to certain consequences. So, in the winter of 1955-56 of the year in SKB ZIL, it was decided to develop and build another prototype designed to test some aspects of the new running gear. First of all, he had to show the real capabilities of low-pressure wheels in the context of interaction with the surface and throughput.

It is known that all the works of the Plant them. Stalin's early four-axle all-terrain vehicles were carried out in a single project called ZIS-E134. The prototypes that were built according to different versions of the project were designated as mock-ups and received their own numbers. For example, two four-axis model 1955 and 1956 models of the year were listed under the numbers 1 and 2. The prototype machine for testing the undercarriage, built on new ideas, received the designation “Layout No. XXUMX”.

The main task of the "zero" layout was to check the chassis. In this regard, the development of the entire machine from scratch was not required. As a result, they decided to build it on the basis of an existing prototype of one of the latest models. For the restructuring, we chose one of the prototypes of a three-axle truck, later delivered to a series called ZIL-157. In order to obtain special capabilities, the car had to be seriously redone. Changed the chassis, as well as a new engine compartment.

The basis of the “Layout No. 0” was a rectangular metal frame, borrowed from the experienced ZIL-157 without any special changes. In front of the frame was placed regular unit, united hood and cab. It is curious that this device was created for the truck ZIS-151 and with minimal changes was used in several other projects. All the “extra” equipment was removed from the frame, which made it possible to bring the mass of the prototype to the required minimum. On the rear overhang of the frame, a new rectangular casing for mounting the power unit has appeared.

To solve research problems, the new prototype should have shown the minimum load on the ground. It was decided to provide such an opportunity by unloading the front axle, for which the engine and part of the transmission elements were removed from its usual place under the hood. Now the gasoline engine and gearbox were in a special case on the rear overhang of the frame. To further facilitate the car, with it removed the hood lid. Perhaps the “Layout No. XXNX” project provided for the possibility of installing ballast in place of the engine that changes the load on the front axle.

Despite the cardinal redesign, the rebuilt ZIL-157 prototype retained its six-cylinder in-line gasoline engine of the same name, with a volume of 5,56 l and power 109 hp. The power plant of the base car was connected to the fuel system, which included tanks with a total capacity of more than 210 l.

Being a further development of the ZIS-151 platform, the ZIL-157 and the experienced “Layout No. XXUMX” retained a relatively complex transmission, providing torque output to all six wheels. In this case, its composition had to introduce some new details. The engine was located in the back of the car, directly in front of it was a gearbox. To connect them with other elements of the transmission, an inclined driveshaft was used, which passed over the frame.

Used five-speed manual gearbox. Then, using a long inclined intermediate shaft, the power was transferred to the transfer case. The latter was intended to distribute power to three other cardan shafts. One of them went to the front bridge, the second - to the middle. The rear axle was driven through two shafts: the first went from the transfer case to the intermediate bearing assembly on the middle axle, and the second was connected directly to the rear axle.

The ZIL-157 truck had a three-axle undercarriage with the 6х6 wheel formula. Split bridges were installed on leaf springs. In this case, the front axle had a pair of its own springs, while the two rear axles formed a trolley with common elastic elements. The front axle was driven. A characteristic feature of the truck was the absence of any amplifier in the steering system.

The car received wheels in the size 12.00 – 18. ZIL-157 was the first Soviet truck equipped with a centralized tire pressure adjustment system. Devices associated with the on-board compressor, allowed to change the pressure in a fairly wide range. Normal pressure was set at 2,8 kg / sq. Cm. When driving on soils with a low bearing capacity, it could be dropped to 0,7 kg / sq. Cm. However, this led to a reduction in the maximum allowable speed and increased tire wear.

The need to ease the car and install the new engine compartment led to the fact that the experienced ZIS E134 "Layout No. 0" did not receive any cargo platform. The central part of the frame, located between the cab and the power unit, remained open.

Despite the noticeable processing of the structure, the basic weight and dimensional characteristics of the prototype corresponded to the parameters of the experienced ZIL-157. The length of the machine still did not exceed 6,7 m, the width was slightly more than 2,3 m. The height was less than 2,4 m. The curb weight of the prototype was at the level of 5,5-5,6 t. At the same time, there was no load capacity, Yes, and the project objectives were not directly related to the transportation of goods. The estimated maximum speed of the car on the highway reached 60 km / h, the range of at least 500 km.

The aim of the ZIS-ЭNNXX “Model No. 134” project was to check the performance of the undercarriage with a reduced specific pressure on the bearing surface. To reduce this parameter, it was decided to move the engine and gearbox back. In addition, the tires maintained a low pressure, which also affected the general parameters of the front axle. Due to the special layout of the units, most of the weight of the machine was to fall on the rear carriage. Her wheels could maintain normal pressure. Thus, the front axle of the machine actually turned out to be the equipment for the experiment, and the two rear axles the auxiliary equipment providing the necessary conditions. 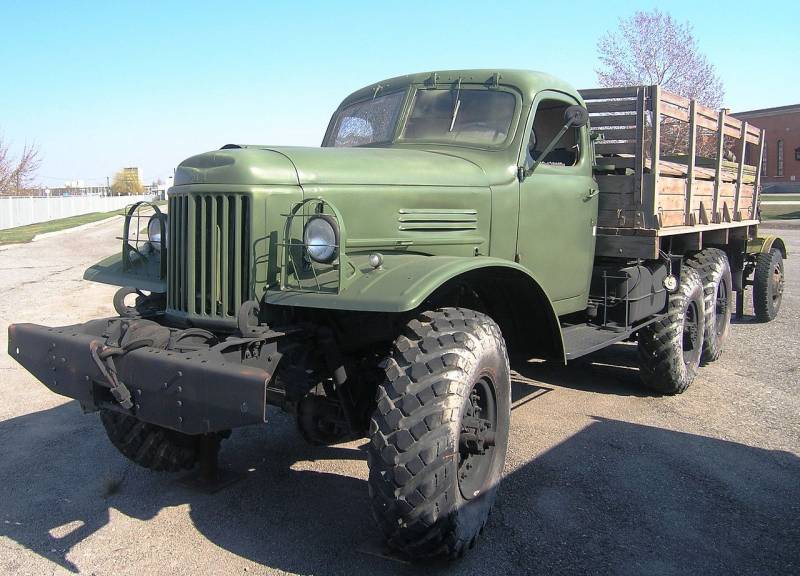 At the very beginning of 1956, the “zero” model of the all-terrain vehicle, built as part of a large-scale ZIS-E134 project, first entered the testing ground in actual conditions. It was quickly established that the machine would not be able to show high performance, and in some cases its operation would be associated with the most serious problems. Such features of the prototype were associated with the specific characteristics of the chassis.

Already in the first stages of the run-in, it was found that “Layout No. XXUMX” with a reduced pressure of the front axle to the surface can normally drive only on good roads, whereas going off-road quickly led to problems. For example, while driving on a snow-covered polygon, the front axle did not show the desired characteristics. It did not provide sufficient adhesion to the ground, and sometimes even rose above it. There was a serious deterioration in handling associated with the same lack of grip. In addition, in some cases, the front wheels acted like a dozer blade and collected a slide of snow in front of them. The wheels could not overcome such obstacles "own making", because of what the car stopped.

Tests of ZIS-E134 “Layout No. 0” did not last too long and ended with negative results. Practice has shown that the proposed chassis design may have some positive features, however, along with them, the most serious drawbacks also appear. The proposed and applied ideas had a certain potential, but for its full implementation, other undercarriage designs were required. Further operation of the prototype in the existing configuration did not make sense.

With the help of "Layout No. 0" Special Design Bureau of the Plant. Stalin was able to collect important information about the features of the work and behavior of low-pressure wheels, which differ in minimal pressure on the supporting surface. This information was taken into account in further work in the field of ultra-high cars and the creation of new projects. So, only within the framework of the ZIS-ЭНNUMX family after the “zero” layout two more prototypes were built. Other projects later also used similar solutions.

The further fate of the prototype model No. 0 is not known for certain. It was built on the basis of the available experienced chassis of a promising truck and, apparently, after completing the test, again went to the mess. He could be brought back in line with the original project or converted into a prototype of a new type. In the fifties, the Plant them. Stalin, later renamed the Plant them. Likhachev was actively engaged in the subject of trucks of various classes, and would hardly have allowed the vehicle to stand idle.

The prototype ZIS-ЭNNUMX “Model №134” was built to test some concepts suitable for use in full-fledged projects of automotive vehicles. During the tests, it was found that such ideas have a certain potential, but the existing machine could not reveal it. This meant that SKB ZIL and other organizations of the automotive industry should continue research work, including the construction of new experimental machines. The development of the ZIS-ЭNNUMX project continued and soon led to the appearance of the next prototype.