Yaalom: the diamond of the Israeli army 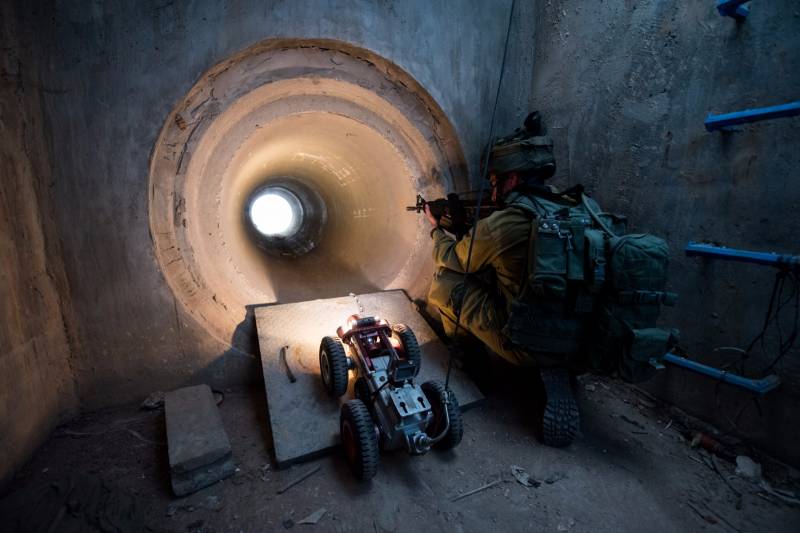 In connection with the growth of threats, the Israel Defense Forces doubled the number of the elite unit Yahalom, part of the engineering support corps. While most units are preparing for a basic tunnel war, Yaalom specializes in locating, clearing and destroying terrorist tunnels mainly with the help of remote-controlled vehicles.


The special operations engineering unit (ISPS) of the Israeli army with the resounding name “Yaalom” in recent years has paid great attention to further enhancing its capabilities in the underground war.

In an interview with the correspondent of the German military journal, the head of the development and concept development service in the Yamal division (Hebrew diamond), captain "L" (the name was not given for security reasons), spoke about how it develops in accordance with new and increasingly complex needs. operational space.

The development consists not only in a significant increase in the number of personnel, but also in a constant search for technologies of a new generation capable of increasing the combat effectiveness of the ISPS, which performs its own regular set of tasks, and also ensures the work of other special units of the Israeli army.

According to an army spokesman, Yalal faces the task of “detecting, cleansing and destroying” the underground networks used by extremist organizations and other structures to smuggle people weapons and stocks to / from the Gaza Strip, for example.

He further noted that “As the threat of terrorist tunnels continues to grow, the tasks of Yalom are complicated by the fact that the enemy’s activities above the ground have no signs of visibility. The bottom line is that the enemy is invisible and gathering intelligence information is very difficult. The Hamas group regards underground war as a continuation of an above-ground war, using all tactics, including defense, offensive and withdrawal. They even go to the destruction of their own tunnels, if only to cause damage to the Israeli soldiers inside; a similar tactic was used in Vietnam. "

Organizing and increasing the capabilities of Yaalom’s special forces followed criticism of the army’s ability to conduct underground military operations, which followed a government report released by the state financial inspector in March 2017.

In this report, the state inspector paid special attention to conducting underground missions based on intelligence data during Operation Enduring Rock in 2014 in Gaza, which was called “slow and inefficient”.

The report also criticizes the army for the lack of information and an incomplete reconnaissance picture of the network of tunnels, as well as the absence of any consolidated doctrine of underground warfare.

Stressing that his unit had continuously increased its capabilities since its inception in 1948, Captain L described how its structure, combat principles, tactics, methods and methods of warfare developed with the additional integration of other special forces and what ended up today was the division of Yaal.

In this regard, he mentioned the integration of the RCB intelligence unit and the disposal of explosive objects in the 2015 year, which followed the takeover of the Samur underground fighting unit in the 2004 year. However, the captain "L" confirmed that Yaalom will expand further and its number will double.

Currently, the combat structure of the unit includes five units, divided into three operational battalions, each with six companies. The companies are divided into platoons and groups of special operations, specializing in the performance of the whole range of operations: RCB-reconnaissance, neutralization of explosive objects, underground combat operations and special reconnaissance.

Special tasks may include detecting and neutralizing landmines, overcoming water obstacles, explosive means of entering an object and fighting improvised explosive devices (IEDs). In addition to the three operational battalions, the JSAL consists of the Academy and the headquarters.

“Already before the start of Operation Unbreakable Rock, Yalom received instructions for a significant increase in numbers,” explained the captain of “L”. “Since that time, we have reorganized our division and set our sights on its significant growth.”

Additional manning is carried out, including through consideration of non-qualified applicants for admission to the elite units of the first level of the Israeli army, including the army unit, Sayeret Matkal, and fleet, Shayetet-13 (S-13), as well as candidates from the corps of engineering support.

Captain "L" also said that Yaalom directly provides special operations conducted by the aforementioned units, as well as other military units of special tasks. First of all, support is expressed in the organization of explosive entrances to objects and the neutralization of explosive objects.

“We are a universal force that can interact with other units or act independently. We have the opportunity to conduct full-fledged operations and act at our own peril and risk, but we can also conduct joint special operations. This is a popular concept of special forces, ”he added, noting that such units as Sayeret Matkal and Shiyet-13 have their own experience of explosive entry and assault, although they sometimes count on Yaalom in more specific conditions. Ya'al is also assigned the task of organizing courses for the disposal of explosive items for all the special forces of the Israel Defense Forces. 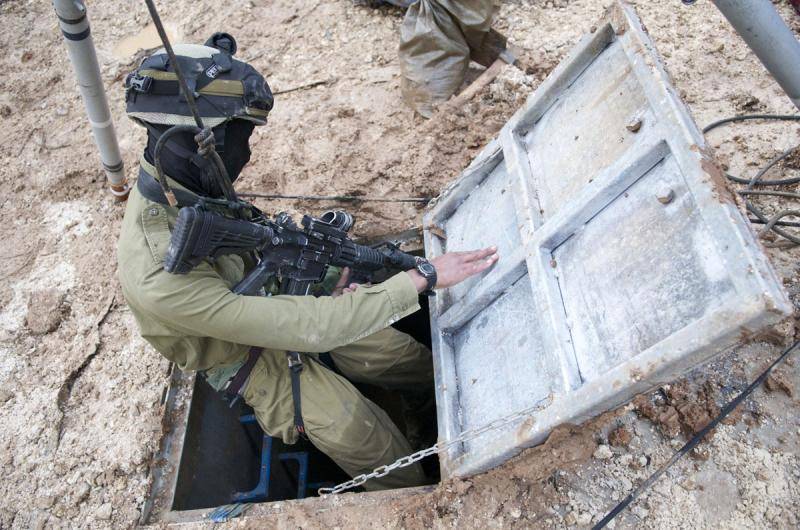 Yaalom’s elite unit conducts training, including climbing steep walls of tunnels and buildings. They also practice evacuation skills from the tunnel of the wounded on a stretcher.

Responding to the criticism of the state inspector, the organization of defense purchases MAFAT of the Israeli Ministry of Defense published a statement in which it spoke about the priority activities in the field of underground technology and personnel training. It consisted, among other things, in carrying out a large amount of research work in order to find advanced technological solutions to counter the tunnel threat.

“As part of a course on the study of each relevant technological direction related to the solution of the tunnel threat problem, MAFAT considered hundreds of proposals submitted by various organizations from Israel and other countries,” the official statement said. “All selected proposals were submitted to the state inspector, who gave a positive assessment to the enormous amount of work of various research organizations and operational units aimed at combating the tunnel threat.”

Noting the significance of the IPSD in the broad context of the Israeli army, Captain L said that the unit “is developing dynamically with respect to RCB intelligence, operations for the neutralization of explosive objects and underground combat operations”.

“In line with our efforts and under the control of the special operations on the conduct of underground combat operations of Samur, we are active in three main areas,” he added, pointing to the discovery, investigation and destruction of tunnels and other underground structures.

As for detection technologies, the captain was unable to provide detailed information due to the secrecy stamp. “This area includes a huge number of technologies that we test daily. Among them are radiography and drones. ”

“The two main technologies are being successfully used in our work today, one of them is the technology of devices for the emergency detection of signs of life or stenovizors,” the journalist added.

Referring to the research technology of tunnels, captain "L" noted that IPSO "continues to update its fleet of robots or remotely controlled vehicles (DUM) and test other platforms with similar capabilities. We also use all kinds of remote control devices in our business, including retractable masts with cameras that help explore tunnels. ”

He confirmed that the ESPO had received the MTN (Micro Tactical Ground Robots) 12 tactical microrobots from Roboteam, which are already being used in Israeli special forces.
Speaking about how doom cells are used to explore tunnels, as well as conducting “more sensitive operations,” the captain noted that Yaalom also expects to receive “more than a dozen of similar robots in the future.”

“Our disposal teams have been using robots for many years now, it’s worth mentioning our loyal assistant, the TALON robot from Qinetiq. We have become accustomed that robots are always with us. At the same time, the addition of small MTGR robots to our arsenal will increase the capabilities of the IPSO division. ”

Regarding the development of additional features that robotization gives, captain "L" noted that the current activity on integrating MTGR with "other sensors and improving remote technologies will expand its capabilities quite significantly."

The MTGR robot, also known by the nickname “Roni Robot”, is capable of performing the tasks of combating IEDs and explosive objects in a wide variety of conditions, including underground.

As a representative of the company Roboteam, MTGR has dimensions 45,5x36,8x14,5 cm, its weight is 7,3 kg or 8,6 kg in tracked or wheeled configuration, depending on the parameters of the task.

The robot is capable of carrying payloads up to 10 kg, it is possible to install up to eight cameras, which allows for all-round visibility. It also installs white and infrared illuminators for working in dark tunnel labyrinths, as well as an 3,5 mm jack for connecting voice devices. The robot with integrated GPS positioning is compatible with the optional FALCON VIEW C2 software.

Duration of the DMGR MTGR is two hours (four hours with a double set of batteries). Also on it are mounted several Picatinny rails for installation of additional devices.

During the operations for the exploration of infections of various types of material and hazardous materials, the robot MTGR for security purposes allows to increase the distance, acting as a repeater for other robots. According to the company Roboteam, when performing demining tasks, this DMM can significantly reduce the risks for specialized groups. 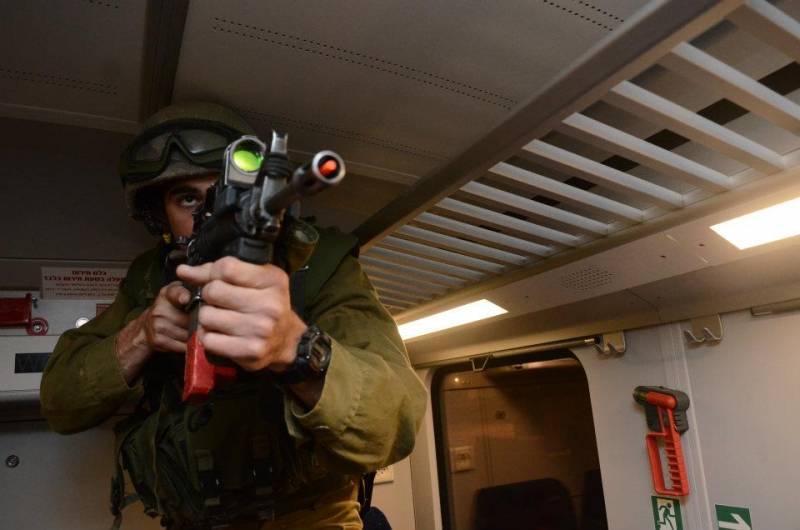 Yaalom is trained in confined spaces, for example, the capture of a train controlled by terrorists

Finally, the captain of “L” said that Yaalom had launched a pilot project aimed at studying the concept of virtual reality technology, which should qualitatively improve the level of training both in the Academy and in groups of special operations. This concept is consistent with the broader activities carried out under the training program for army units for demining. “This is a fairly large project that began as a pilot project in our unit.”

It also allows operators to undergo training in the disposal of IEDs and other explosive objects, ranging from rocket-propelled grenades to mortar rounds and artillery shells.

The unremitting pursuit of superiority is the basis of the international community of special operations forces whose units continuously strive to maintain tactical superiority over their rivals. When fighting with an almost equal opponent or less equipped, but initiative insurgent groups, special forces are constantly forced to develop not only the most popular and useful technologies, but also tactical methods, methods and methods of warfare in order to carry out their difficult service as effectively as possible.