January 17 2018
26
January 10 Vladimir Putin met with Viktor Medvedchuk, apparently at his request. Discuss humanitarian issues. But Medvedchuk can fly to Moscow only in agreement with President Petro Poroshenko. Medvedchuk's previous visit to Moscow was last month (in connection with the exchange of prisoners in the Donbas), but he can after all discuss with Putin some other issues. For example, US policy in Ukraine. 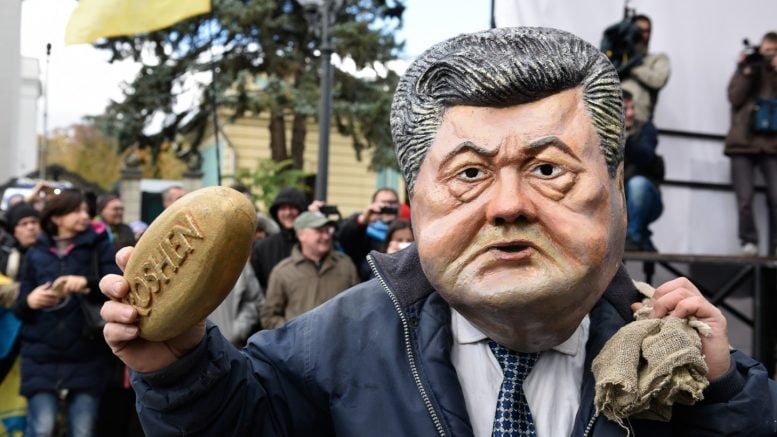 Now the United States is changing its policy in Ukraine, and in relation to Poroshenko personally. 11 January, so coincidentally, the senior researcher of the Atlantic Council of the United States, Diana Francis, published on the organization’s official website an article-Poroshenko’s ultimatum and the Ukrainian odious elites demanding to start reforms immediately, predicting otherwise the Third Maydan. Just like Mikhail Saakashvili, who is trying to launch this very “third Maidan” in Kiev.

By itself, the swallow Francis, of course, will not do the Maidan weather, but after her scream, the dam burst through. Poroshenko was attacked by a barrage of attacks, compromising materials and political demands, including from the IMF and the US Embassy in Kiev.
Al-Jazeera agency immediately published the closed materials of the Kramatorsk court, accusing Gontareva and Poroshenko of taking abroad and laundering “the money of Yanukovich” in the amount of 1,5 billion dollars. According to rumors, this information leaked from the National Anti-Corruption Bureau of Ukraine, but how did it get to the Middle East? Detractors point to the "long arm" of the CIA and the same "Atlantic Council."

The US Embassy in Kiev in the person of Ambassador Marie Yovanovitch himself, expressing appropriate concern about corruption in the country, demanded, following Saakashvili, the adoption of the law on the Anti-Corruption Court, taking into account the wishes of Western donors to Ukraine.

Specialized anti-corruption prosecutors discovered corruption in the SBU itself! Allegedly, the SBU illegally issued Ukrainian passports right and left to whom she wanted. This is an integral part of the work of the department of Vasyl Gritsak, and suddenly - the accusation of corruption! And all because the evil tongues of political scientists call SAP an informal department of the US Department of Justice.

Finally, allied Georgia issued on the Rustavi-2 television channel compromising Poroshenko 11-years ago, allegedly he made a written promise to the FSB of the Russian Federation not to engage in anti-Russian activities. Everyone agrees that this is a fake, but they also agree that he was not accidentally thrown into Tbilisi, and this was obviously not done without the hand of the CIA. A political analyst from Kiev, Vadim Karasev, who was well known for being close to the authorities, understood that it was the West that hinted at Poroshenko: he had to leave.

Poroshenko in response to these attacks fights off as always Russophobia, that the flag of Ukraine will fly in Donetsk, Lugansk, Simferopol and Sevastopol, but now it does not help! Mustafa Nayem, the nightingale of the second Maidan, accuses Poroshenko of “paranoia because of the USA”, like Yanukovich’s, his colleague Sergey Leshchenko discovers that Ukraine under Poroshenko’s rule has become a “failed state” whose residents are massively leaving to look for work abroad. Kiev political analyst Mikhail Pogrebinsky calls these journalist colleagues “a faction of the US Embassy in the Rada”, and they also accompanied Saakashvili during his invasion from Poland to the city of Lviv. Again we leave on the trail of Saakashvili! What does all this mean?

Poroshenko began to poison, from all sides. It is possible that these political trends were discussed in Moscow by Putin and Medvedchuk, who were numbered among Poroshenko’s “odious elites,” Saakashvili’s associates, along with Rinat Akhmetov.

The enlightenment of the “embassy” Kiev journalists that the Bandera Ukraine became a “failed state” is more than an epiphany, because they had not seen this open secret before. They did not see that the economic situation is deteriorating sharply, the country is sitting on IMF loans, but this cannot continue for a long time. The IMF refuses to finance, the EU refuses the already promised tranche of 600 million dollars - and they consistently require, again, the adoption of the law on the Anti-Corruption Court, which would not have been edited by Poroshenko, but controlled by Western donors.

It turns out that the dog is buried in the economic situation in Ukraine: the long-standing question became an edge: who is to blame for the fact that the country has become a “failed state” and is falling apart? Theoretically, there are two possible answers: 1. Unprofitable terms of Euro-association. 2. Corruption "Poroshenko regime." Another long-awaited answer: Russia is to blame for everything, is already in circulation, all the more so since the trade turnover between Ukraine and Russia has grown substantially in 2017.

Europe and the United States insist that the whole thing is corruption in Ukraine, and require the urgent creation of an Anti-Corruption Court under its administration. There is corruption in Ukraine, as elsewhere, however, in Ukraine there is also a report by Natalia Mikolskaya, deputy. Minister of Economic Development of Ukraine, from which it follows that 20% decline in industrial production in the country was due to unfavorable Euro-associated relations with Europe.

The fall in industrial production by 20% is an economic catastrophe for any country, and corruption just arises as a result of this catastrophe: everyone can save himself as much as he can without regard to the current legislation! But can the IMF with the EU and the USA recognize that it was they who by their Euro-association led Ukraine to an economic catastrophe? And Poroshenko can not say about it. There is no one to convey the truth of Natalia Mikolskaya to the broad Euro-associated masses! For no one wants to know the truth about himself, as the Bible rightly asserts.

Therefore, the “odious elites” led by the corrupt official Poroshenko turn out to be extreme in the impending economic cataclysm, and the entire campaign named after Diana Francis is aimed at denouncing the “odious elites” of Poroshenko, who brought the country to the end with their corruption. And no Russophobic statements Poroshenko, with flags and hymns, can not do anything about it: he served his masters with life, and now he has to serve with his reputation, perhaps with a fatal outcome.

In order to “confirm the commitment to the fight against corruption,” according to US Ambassador Jovanovitch, Poroshenko must put the Anti-Corruption Court over himself, led by Western donors, who will sue him for corruption! This, by the way, is a common world practice, in South Korea recently it was for corruption that the president was removed from power. How to be with all this? Perhaps this question was discussed with Putin by Medvedchuk, a representative of the “odious elites” and Poroshenko.

To understand the strange meetings between Putin and Medvedchuk, we need to recall another US special representative, Kurt Walker, who had disappeared in America, although the Volker-Surkov summit in December was scheduled. Kurt left us with a final forecast of 80% probability of resumption of hostilities in the Donbas. Why not 100%? Gave the world a chance, he's a “peacemaker”.

Poroshenko took advantage of this chance, which led to the disappearance of Kurt Volcker from the political stage and summoned Diana Francis from the Atlantic Council, with Poroshenko’s formidable ultimatum. The war in the Donbass, which has a 80% chance of a Walker, has not yet taken place. It is possible that negotiations between Putin and Medvedchuk and Poroshenko are going on around this issue. And maybe some kind of bargaining.

Ctrl Enter
Noticed oshЫbku Highlight text and press. Ctrl + Enter
We are
The Atlantic Council is tired ...Medvedchuk: The refusal of NATO can help Kiev return Donbass
26 comments
Information
Dear reader, to leave comments on the publication, you must to register.