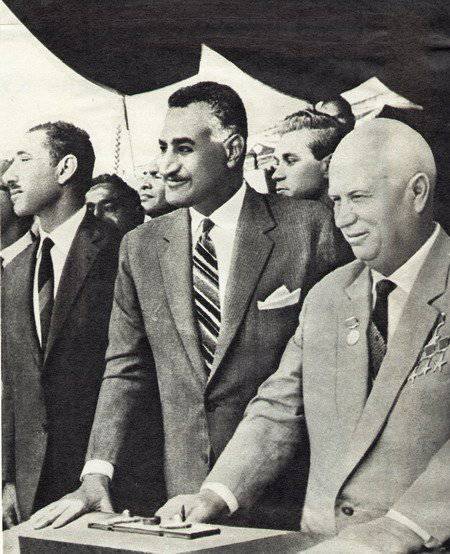 In the middle of the 20 century, the struggle for hegemony in the bipolar world was quite tough. The culmination of the confrontation between the two superpowers, of course, was the Caribbean crisis, but even after it there were serious clashes between the USSR and the USA. No international conflict could not do without their participation. A milestone in the many years of confrontation was the period of Arab socialism in Egypt, which began with the 1952 year.

В historical Sources of events in Egypt in 1952 are called revolution. This opinion is supported by eminent political scientists and historians, citing irrefutable facts of complete state reorganization after the change of government as proof. There were many reasons for the long overdue coup. King Farouk and his government had long failed to cope with the problems of domestic and foreign policy, most of the country's population was beggarly, the state apparatus, police and army were highly corrupt, and the dominance of the British caused increasing national indignation. The king's authority was undermined by his intemperance towards women. There were legends about the love affairs of the head of state. In addition, the traditions of the state were daringly violated by Farouk's second marriage to the commoner Nariman, dissatisfaction with the king's personality became evident. The situation was aggravated by the setbacks in the Arab-Israeli war in 1948-1949 and the inability of the current government to take revenge.

In the middle of winter in the country mass demonstrations of an anti-British character began, the prime ministers changed three times by the king, but control over the country was not restored. The Council of Free Officers, headed by Gamal Abdel Nasser, decided to overthrow Farouk and build a new free state with an independent foreign policy, taking into account national interests. At the time of the coup, Egypt was an underdeveloped country with a feudal system. There was very little land suitable for agriculture, and industrial production was in its infancy, while many British and French enterprises and banks operated in the country.

On the night of July 22-23, Farouk’s palace was surrounded by military forces under the leadership of the Council of Free Officers. The king was demanded to renounce, cutting off communication with the outside world. After some hesitation, Farouk abdicated the throne and was expelled from the country. Faruq’s son Ahmed Fuad II became the new ruler of Egypt, but a year later the monarchy was transformed into a republic, and Mohammed Nagib became its head. Interestingly, soon after the abdication, the second wife of King Faruk Nariman divorced the royal husband and returned to Egypt without difficulty.

It should be noted that the events of 1952 of the year were not a simple change of the ruling elite, it was a complete restructuring of the state system, a radical change in foreign policy, as well as a change in public consciousness. President Nagugh was at the same time the chairman of the Revolutionary Leadership Council, he began the first reforms, but in 1954, Gamal Abdel Nasser came to take his place, who enjoyed great confidence and sympathy from the Egyptian population. Mohammed Naguib is removed from office on charges of trying to establish a dictatorship, and it was Nasser who initiated the accusatory process. Up to 1973, the first president of Egypt was under house arrest, since, according to the heads of Egypt, he was a political threat to the state system.

Gamal Abdel Nasser was born on January 15 of the year 1918, in the Egyptian province of Assiut, in the city of Beni Moore, in the family of a simple mail worker. Nasser received a good education, but sought the mercies of fate without any help. In the next Arab-Israeli war 1948, he was wounded, and in the postwar years he was engaged in teaching. Strong, decisive and energetic nature, combined in it with the ability to endear others. He was a true patriot of his country who dreamed of a great and independent Egypt. The initiative to create the anti-feudal and anti-monarchist movement belonged to him personally, so Nasser is justly considered the founder of the Union of Free Officers. In the 1964 year, already being the president of Egypt, Nasser was awarded the title Hero of the USSR, to which the Soviet population reacted very negatively.

Nasser's politics can be described as Arab nationalism. The new president sought to remove the state economy from the sphere of foreign influence. The army was to become the skeleton of the new state, the parties were forbidden, and the land was transferred to the peasants. In fact, the new regime was not much different from the dictatorship, but the president was trusted, he was popular, and he considered democracy harmful to Muslim society. In the early months of his reign, Nasser sought American support, but the United States preferred to maintain favorable relations with Britain. The region was considered the sphere of influence of the British, the Western coalition also believed that the pronounced religiosity of Egypt would prevent the establishment of close allied relations with the Soviets. In addition, the imperialists were convinced that Nasser would adopt a flexible political stance towards Israel.

Despite all the contradictions, the Egyptian government has repeatedly attempted to resolve issues about Sudan. Israel, fearing the establishment of favorable relations between Egypt and the United States, as well as Great Britain, were undertaking secret terrorist operations against British and American institutions in the territory of the reforming state. The Nasser’s desire to create not just a sovereign powerful state, but a center of unification of the Arab states caused fears. One of the most significant contradictions in international politics was the question of the Suez Canal. The channel served as a transport artery for Europe, so the state that controls it, had the opportunity to influence the global economy. There was not enough money to reform the country; the new president, convinced of the futility of trying to get funds from the United States, nationalized the channel that belonged to a large corporation. The actions of the Egyptian President inevitably lead to the Anglo-French war, at this moment the USSR enters the political arena.

After the start of the bombing of Cairo by the forces of the Anglo-French coalition, as well as of Israel, Nasser had no choice but to turn to the Soviet government for help. The USSR, interested in being in the Middle East, willingly joins the union. However, Khrushchev was not so much interested in the security of an ally as in his direction along the socialist path of development. Despite all the ideological justifications, the interest turned out to be military-political. Egypt was perceived as a convenient military base in the most "unpleasant" place for NATO. The Arabs are provided with the necessary financial assistance, a military supply channel opens. In addition, the USSR expresses a very tough stance on the issue of aggression against Egypt and sends opponents, including those to the UK, to cease hostilities. Khrushchev also insists on the recognition of the channel property of the Egyptians. The USA supports the demand of the USSR and military actions in the region, the demands of the two powers are supported by threats of the use of force against the aggressors. By March, the 1957 of the year is terminated. However, the British soon intensify their actions to expand the anti-communist bloc.

Relations between Egypt and the USSR are developing in a positive way. The conditions for the gradual long-term financing of the Aswan Hydroelectric Station in the south, which made Egypt dependent on Europe, predetermined the rapprochement of the two countries. Khrushchev offered to make investments in an accelerated mode, and also promised substantial support in restoring the military power of the state. The first deliveries of weapons began in 1955 through Czechoslovakia. After the nationalization of the Suez Canal, British and French banks, companies, including insurers, were transferred to state ownership - the economic reform was almost complete, and the Arab leader became a national hero. The Soviet authorities readily accept in Moscow not only Nasser himself, but also other Arab statesmen, and exchange high awards and titles. Mutual excursions are conducted, civilians and military experts are sent to Egypt to rebuild the country's economy in a socialist way. Mikoyan is personally involved in the development of economic reforms. The development of relations was greatly facilitated by the establishment of personal friendships between Khrushchev and Nasser. The ideological attitudes of the Arab leader were somewhat different from the Soviet propaganda, as he singled out a special kind of socialism - Arabic. Gamal Abdel Nasser insisted that Egyptian, and in general Arab socialism is inextricably linked to religion, while Soviet is atheistic. Did not share the president of Egypt and the communist worldviews.

Arms shipments to Egypt were not of an enrichment nature, since most of the transferred weapons wore gratuitous in nature. The military-industrial complex received an excellent testing ground. The political interests of the two states were often contradictory, but the USSR was for Egypt the only guarantor of independence from the Western powers. The strengthening of the Arabs led to the active participation of France in the armament of Israel. The Americans finally abandoned the support of Egypt and adopted the position of Great Britain. The next Arab-Israeli conflict was brewing. 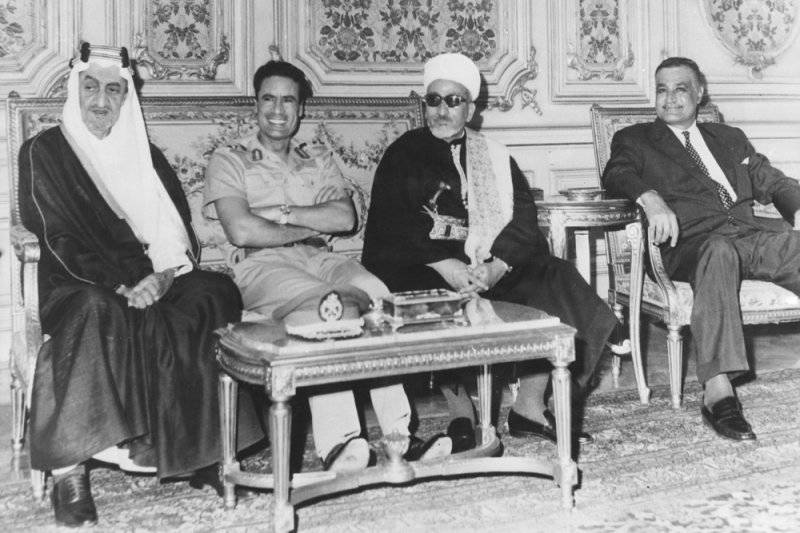 In 1968, the Arab leader advances a program to eliminate the consequences of Israeli aggression, which is the beginning of open preparations for war. At the same time, the Soviet authorities are conducting secret negotiations with the Americans and guaranteeing that arms will be supplied to Egypt only in exchange for promises not to start hostilities. However, in 1966, Nasser recruits Syria as a military ally, and the Palestine Liberation Organization was created in 1965. After a series of mutual aggressive attacks in June 5 1967, Israel conducts a six-day Focus operation, during which it almost completely destroys the military forces of Egypt and its allies. Despite appeals from the USSR’s Arab leader, he does not interfere in the conflict, which was later regarded by Nasser and his followers as a betrayal.

Today, political analysts express the view that the USSR could not intervene in the conflict, since such actions could provoke the Third World War, but Egypt insistently demanded help. The crushing defeat in the six-day war marked the beginning of a cooling of political relations between countries. Nasser, considering the defeat of personal shame, resigned, but at the request of the population returned to the post. He had to re-establish military power, as well as determine future policies. Soon, Nasser passed away.

Anwar Sadat, who took his place, was inclined to cooperate with the United States, since it promised Egypt a favorable and quick settlement of relations with Israel and considerable financial support. Relations with the USSR were practically terminated, and Arab socialism was curtailed.