Rada will consider the law on the reintegration of Donbass

January 16 2018
41
The Verkhovna Rada will consider in the final reading a bill on the reintegration of Donbass, in which Russia is called the “aggressor”, and the territories beyond the control of Kiev are “occupied”, reports RIA News. 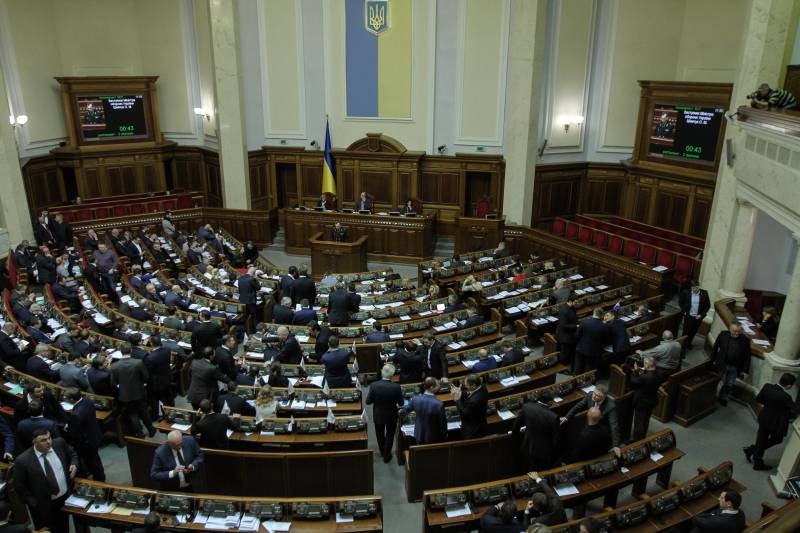 Consideration of the document was postponed several times due to the lack of consensus on the document both inside parliament and in the circle of Kiev’s western partners: in the EU and the USA they consider that its adoption will complicate negotiations to resolve the conflict.

Parliament Speaker Andrei Paruby believes that the discussion of the document on Tuesday will not be easy, but ultimately the law will be passed. At the same time, a number of deputies do not exclude that everything will depend on the turnout.

According to the document, the territories of Donbass not controlled by Kiev are recognized as occupied, and the management structures of unrecognized republics are occupied by the administrations. “The bill gives the president the right to use the armed forces in the region in peacetime to implement measures to ensure the sovereignty of the country. This will legalize the use of the army in the east without declaring war, the publication says.

In the document, following the results of the first reading, the paragraph on the priority importance of the implementation of the Minsk agreements for the settlement of the conflict was deleted.

By the second reading, the deputies filed some 700 amendments. The greatest resonance was caused by the amendment, which obliges the Cabinet to break off diplomatic relations with the Russian Federation. With such an initiative came the pro-presidential faction "Petro Poroshenko Bloc". However, this initiative was criticized in the parliamentary coalition - the rupture of diplomatic relations is within the competence of the Foreign Ministry, and the Council cannot take such decisions. As a result, it was decided not to include this amendment in the final text of the draft law.

The leader of the public movement “Ukrainian choice is the right of the people”, Viktor Medvedchuk believes that the law on the reintegration of Donbass “puts a cross” on the Minsk agreements and does everything to prevent the region from returning to Ukraine.

Adoption of the law, in which recognition of Russia by the aggressor state takes place, will mean that Ukraine will no longer be able to count on the influence of Russia (as a member of the Norman Quartet) on the unrecognized republics in the implementation of the Minsk agreements,
said Medvedchuk.

According to him, "the purpose of the laws on the reintegration of Donbass is not the restoration of the territorial integrity of Ukraine, but its split and the continuation of the armed conflict."

The DPR also believes that the adoption by the Rada of the law on Donbass will negatively affect the peaceful settlement, since “the bill contradicts the Minsk agreements and violates the conflict resolution mechanisms previously approved by the parties”.

Rather, it contains provisions on intentions to unleash full-fledged military operations, and even in its name now it’s not the Donbass "reintegration" that sounds like the original version of the bill, but the phrase "renewal of sovereignty", which also does not indicate the desire of the Ukrainian authorities to peacefully settle the situation
said acting Foreign Minister of the DPR Natalia Nikonorova.