January 17 2018
20
The name of this politician was very famous in the 90s of the past century. They treated him differently: from the TV screens, he was usually frankly harassed, called “Sharikov” (although this was an educated person, a graduate of Moscow State University who knew several languages, a connoisseur of poetry). Those who followed him were nicknamed “Anpilovskie grandmothers” (although there were both young and middle-aged people). It was necessary to create the illusion that all those who resisted the collapse of the Soviet Union and the “democratic” reforms were either marginal or deep old. Labels on those who do not fit into liberal values ​​are still hung up, only they have slightly changed: “scoops”, “quilted jackets” ... 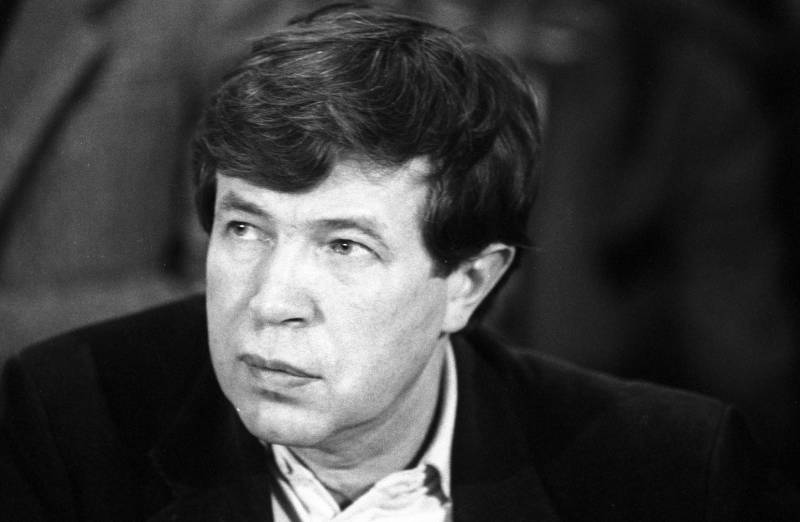 In the evening of January 15, on the 72 year of life, Viktor Ivanovich Anpilov, leader of the movement “Labor Russia”, died. In recent years, his name has actually not sounded from the screens and from the pages of newspapers (and his position was largely controversial). But without this person it is difficult to imagine the political landscape of 90, when the notion of “non-parliamentary opposition” was associated with it. Opposition to the Yeltsin regime — a regime that not only led to the impoverishment of the majority of the population and the enrichment of the handful, but also consistently surrendered the interests of Russia.

Viktor Anpilov was born in the village of Belaya Glina in the northeast of the Krasnodar Territory on 2 in October 1945 (by the way, he always proudly called himself the Victory Peer, and one of his journalistic pseudonyms is Beloglinets). In an ordinary rural family, in addition to him, there were five more children. Stood hungry post-war years. Father of the family - crippled in war. So Viktor had to start his career early. When he was not yet 15 years old, he left for Taganrog. After a vocational school, he worked as a mechanic at the Taganrog combine plant, studied at a school for working youth. The young man had a dream - to become a journalist.

In 1964, Victor was drafted into the army. After serving in the missile forces, after his return he became a correspondent for the newspaper “The Way of the October Revolution”, published in Beloglinsky district. Then he entered the Moscow State University. M. Lomonosov at the Faculty of International Journalism. In 1972, he joined the CPSU.

After graduating from Moscow State University, thanks to his excellent knowledge of Spanish, Anpilov achieved direction to Havana, to the Cuban Petroleum Institute, as a translator. He fell in love with Latin America, with its culture and traditions of struggle. So, he was shocked by the events of 1973 of the year in Chile, the murders of Allende and Victor Hara. Later in his memoirs he will write about a rally of solidarity with the Chilean people, which was held in Havana in October 1973 of the year. About how a million people listened to the speech of Fidel Castro, and then the widow of Salvador Allende spoke out, and the whole square cried, grieving for the tragedy.

Returning to the USSR, in 1974-1978, Viktor Ivanovich worked as a correspondent for the Leninets newspaper, published in the Moscow Region. However, he wanted to go back to Latin America. And he succeeded.

He volunteered to be a war correspondent for the State Radio and Television in Nicaragua. There were few people who wanted to go to this “hot spot” - there were fierce battles between the Sandinistas (socialists) and the right (contra). Anpilov shared with the soldiers of the war. He told the Soviet people about the heroism of the Sandinistas, while not yet knowing that their own contras would soon appear in the USSR.

When the so-called “Perestroika” has gone too far, and the looming catastrophe became apparent to many honest communists, Anpilov was one of the first to lead the resistance to the collapse of the USSR and the CPSU. In 1990, he fought with a journalist from the well-known perestroika “Vzglyad” program for a deputy position in the Supreme Soviet of the RSFSR, but lost. However, he managed to become a member of the Moscow City Council of People’s Deputies from the Solntsevo District. There he entered the Communist faction "Moscow". Then he joined organizations that, to the best of their ability, resisted the negative trends of “perestroika” - the United Front of Workers and the Movement of the Communist Initiative. He created his own newspaper - "Lightning". Later, the Russian Communist Workers Party (RKRP) (where Anpilov was the co-chairman) and the movement "Labor Russia" were formed.

Mass street protests began against the “democratic” reforms that had begun. When they say that nobody allegedly resisted the collapse of the USSR, this is not true. At the beginning of 90's, hundreds of thousands of people took to the streets, advocating the preservation, and then the restoration of the Union. Sometimes mass demonstrations ended in clashes with riot police - and in fact someone then really believed in democracy. But Yeltsin’s democracy existed only for itself ...

Victor Anpilov was one of the main leaders of the demonstrations. He fought at the time when the CPSU was banned, and no one had yet thought about creating a Communist Party of the Russian Federation. “The street belonged to us,” he recalled those years. Of course, this struggle was associated with risk.

Almost immediately after the Belovezhskaya Agreement was signed, Labor Russia stood up for the Riga OMON commander Sergei Parfenov and the head of the Latvian Communist Party, Alfred Rubiks (who resisted the rebellion of extreme nationalists in Latvia and were thrown into prison cells for this). The resolution of the rally Anpilov tried to transfer to the Kremlin, going to the Spassky Gate. But he was captured by riot police and beaten, despite parliamentary immunity. Later, in connection with the beating of a deputy of the Moscow Council, they even opened a criminal case, but it has sunk into oblivion. Despite what happened, immediately after his release, Anpilov went to the rally in defense of the leader of the GDR, Erich Honecker. Such were the everyday life of the Resistance in those days ...

The 1992-1993 years were the fiercest in the confrontation of the Yeltsinists and those who were against the abuse of the country. Riot policemen on the orders of the Yeltsin clique organized mass beatings of demonstrators in Moscow several times (in particular, February 23 and June 22 on 1992 of the year).

Then there was the “Bloody May Day” 1993 of the year, when participants in a popular demonstration were beaten up on Leninsky Prospect, contrary to all the values ​​of “democracy”. But it was only people who were told about the freedom of meetings and meetings, there were demonstrations for Yeltsin, and no one yet knew that it was impossible to get together. All the more - on 1 May.

The Yeltsin entourage decided that on May 9, Anpilova should be “isolated”. This was done in the spirit of gangster 9-x - he was simply kidnapped and taken blindfolded to someone's cottage. They brutally beat and imitated the execution. They were released only after the demonstration on Victory Day ended. So no one answered for the kidnapping of the deputy, but he himself was tried to be shot for the 90 clashes of May. The Moscow Council, however, refused to remove immunity from it.

Yes, then the Moscow Council and the Supreme Soviet could decide something. And that was exactly what Yeltsin did not like. An anti-constitutional decree of 21 of September of 1993 to disperse parliament and defeat local Soviets was directed against legitimate legislative bodies, both central and local. It was a coup, the apotheosis of which was the shooting of the House of Soviets 4 October 1993 of the year.

Viktor Anpilov was among the defenders of the Constitution and the Supreme Council. After October 4, he couldn’t stay in Moscow - he was declared a hunt. He tried to get to Abkhazia, but was arrested near Tula on October 7 and thrown into Lefortovo prison. Together with the chairman of the Supreme Council of the Russian Federation Ruslan Khasbulatov, vice-president Alexander Rutsky and others who tried to preserve the Constitution of the country. There, in the cell, he wrote the book “Lefortovo dialogues” (later he would write several more books: “To the call of the living”, “Our struggle”). Six months later, he was released under an amnesty, the decision of which was taken by the State Duma (the new parliament of Russia, whose powers, however, were severely curtailed in comparison with those held by the executed Supreme Soviet).

... I met Anpilov when I first came to a demonstration dedicated to the first anniversary of the monstrous execution of the Supreme Soviet. Viktor Ivanovich immediately made an impression of a very simple, understanding people, modest ... I happened to be his guest - an ordinary apartment on the outskirts of Moscow, a modest atmosphere. For material values, he did not chase. He was incredibly energetic.

The election campaign of 1995 of the year ... The “Communists - Labor Russia - For the Soviet Union” bloc only slightly overcame the 5% barrier. Then they said that in fact this block received more than 5% of votes, but a command came from the Kremlin - not to miss ... I remember two episodes describing how people treated Yeltsin in those years. The issue of the newspaper "Lightning" with a large headline "Yeltsin on the rails" literally snatched from his hands. In another issue a caricature of Yeltsin, Gaidar, Chubais, Novodvorskaya and other "democrats" was printed - this newspaper was also very well dismantled. As one passerby said: "For the sake of these faces, I will take them."

However, the traffic gradually went down. Someone adapted to the new living conditions, someone had to deal with their own survival, well, and someone simply could not stand the “reforms” and died ... And, to be honest, after the shooting of 1993, many people were intimidated. And then there's Yeltsin’s falsified “victory” in 1996 ...

In general, gradually Anpilov with his many thousands of demonstrations began to disappear from the information field. He tried several times to fight for the deputy’s place, but there, “above,” a clear decision was made: not to let him go. All obstacles were repaired. He did not integrate into the so-called systemic opposition.

With the position of Anpilov after 2006, I, frankly, did not agree. But then many leftists and patriots who actively fought against the Yeltsin regime also succumbed to the so-called “Other Russia”. But this is not the time to talk.

At least in the 2014 year, Viktor Ivanovich was among those who warmly supported the annexation of the Crimea to Russia. Thus, life put everything in its place: the true patriots in that year of the watershed separated themselves from the liberals.

A few days before his death, Anpilov was detained for a picket in support of the Communist Party candidate Pavel Grudinin (however, he was quickly released). And on January 13, he was driving to Grudinin's election meeting. Suddenly, on the way, he became ill. He was hospitalized with a severe stroke, but he died without regaining consciousness.

Someone will say, they say, Viktor Anpilov was an ambiguous politician. Yes, he had mistakes. But now even his ideological opponents (both from the liberal and the monarchical camp) agree on one thing - he was a courageous, honest and principled man, faithful to his convictions to the end. 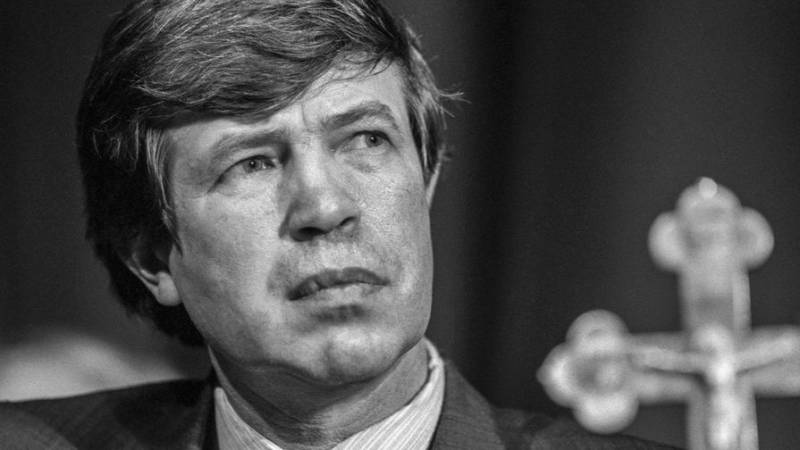 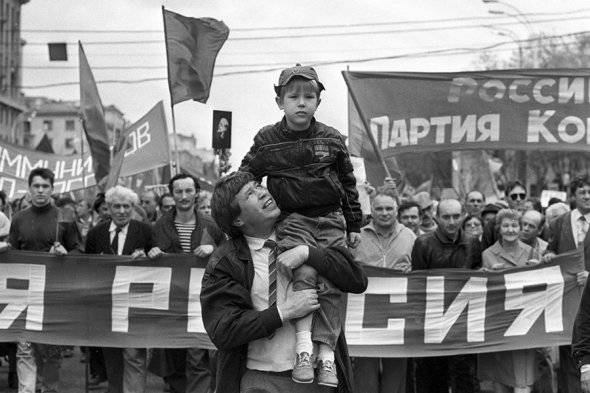 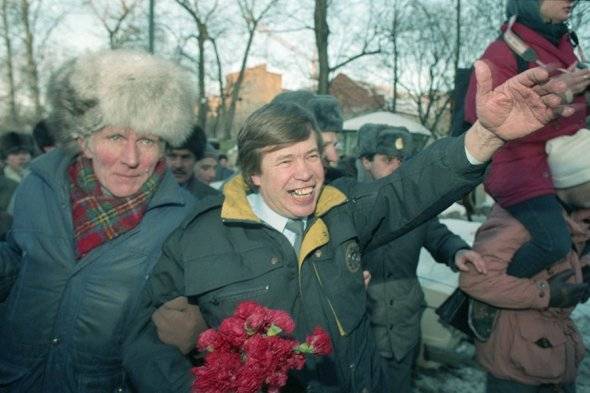 Ctrl Enter
Noticed oshЫbku Highlight text and press. Ctrl + Enter
We are
Reports from the militia of New Russia for October 12 2014 yearYuri Drozdov: Russia prepared the role of the sacrificial calf
20 comments
Information
Dear reader, to leave comments on the publication, you must to register.