Which helicopter carriers will receive the Russian fleet?


According to the plans, Severnaya Verf will first build two helicopter carriers, after which it will start building the Leader project of nuclear destroyers. Development work on Russian helicopter carriers will begin in 2018, in 2020 it is planned to begin work on the construction of the lead ship with its delivery to the Russian the fleet in 2024, the production of the first and only serial helicopter carrier is planned for 2022 with transfer to its fleet in 2026, the source of the TASS agency said. At the same time, TASS notes that they do not have confirmation of this information. It is worth noting that earlier Deputy Minister of Defense of Russia Yuri Borisov told reporters that the first Russian helicopter carrier will appear around 2022.

The first attempt to acquire UDC

The need to be in the fleet of universal landing ships that could serve as the core of expeditionary forces, landing marines at large distances from their bases (including those outside the coastal area aviation), the leadership of the Navy of the Soviet Union was fully aware back in the 1980s. The first ships of this class in the USSR were to be the vessels of Project 11780. These UDCs managed to get the playful nickname "Ivan Tarava", which they gave them for their resemblance to universal landing ships like the Tarawa of the US Navy. The UDC of project 11780 had a normal displacement of 25 tons. The autonomy of sailing was estimated at 000 days, the maximum speed - 30 knots, when sailing in an economical course - 30 knots, ships could cover 18 nautical miles. The maximum airborne landing capacity of UDC was estimated at 8000 people, the composition of the air group - 1000 transport and combat helicopters Ka-12. In the anti-submarine version, the ship could take up to 29 Ka-25 helicopters. 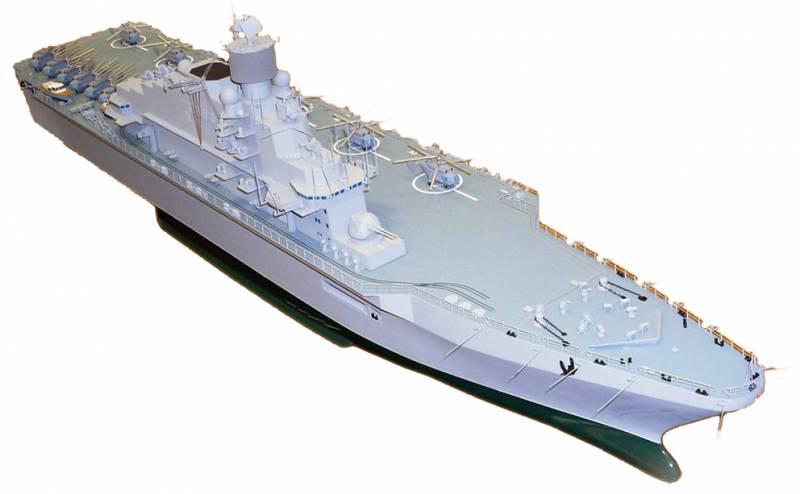 layout UDC project 11780
The main lobbyist for the construction of the UDC of the 11780 project was not so much the Main Board of the Navy as the General Staff. The Soviet military needed a tool that would allow them to forcefully defend the country's interests in remote regions of the world, even if there were no USSR-friendly states or armed pro-Soviet organizations and movements. The characteristics and equipment of the ships of the 11780 project allowed them to be used as control ships, as well as in search shock teams, the main purpose of which would be to destroy enemy submarines.

By the middle of the 2000-s, the economic situation in the country has stabilized. Against the background of high oil prices and the growth of the economy in Russia, they again thought about obtaining weighty tools for upholding their political interests in various parts of the world. Taking into account not the best position of the Russian industry and the complete lack of experience in building ships of this class, it was decided to acquire the UDC from foreign manufacturers. So began the famous epic with "Mistral". 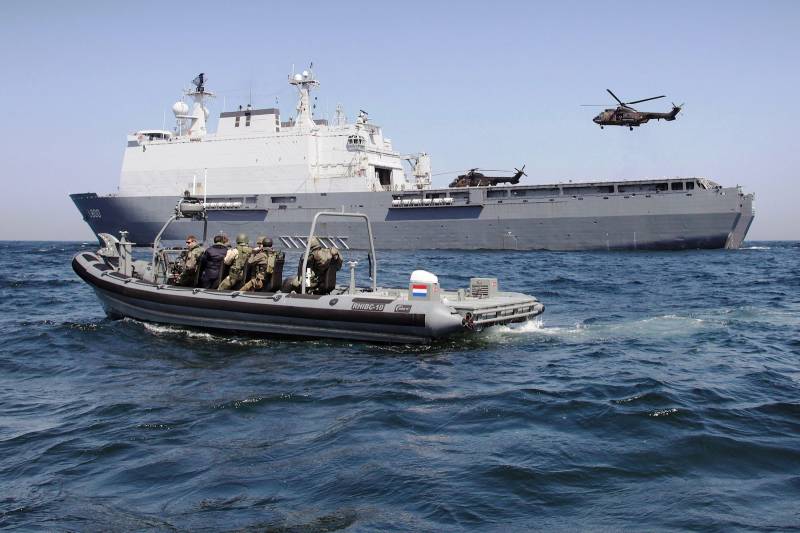 DKVD "Rotterdam"
According to information available today, it can be said that the Russian naval leadership considered a number of foreign projects of such ships. Of greatest interest were the South Korean UDC project of the Dokdo type, as well as the Dutch helicopter landing ship dock (DVKD) Rotterdam. Further, in terms of attractiveness for the Russian military, the Spanish “Juan Carlos I” was modeled on the model of which the Canberra-type UDC was also built for the needs of the Royal Australian Navy.

However, the political conjuncture, as well as the contractual capacity of the French, who agreed to the transfer of technology, led to the fact that the preference of the Russian admirals was given to the UDC project of the Mistral type. Initially, Russia hoped to buy 4 ships of this type, two of them were planned to be built in France with the participation of enterprises from Russia, and two more directly at Russian shipyards. As a result, an agreement was signed on the construction of two ships totaling 1,15 billion euros, the cost included technology transfer, crew training and training, and supply of additional equipment, including landing craft.

17 June 2011, the contract for the supply of two ships was finally signed. As part of the Russian fleet, the ships were to receive the name "Vladivostok" and "Sevastopol". In the first half of 2014, Russian seafarers began training in the management and maintenance of UDC data. 15 September 2014 of the year “Vladivostok” with the Russian crew on board went to sea for sea trials. Crew training took place against the backdrop of the growing Ukrainian crisis 2014 of the year, which eventually led to the fact that France refused to fulfill the contract. The sum of money paid for the ships returned to the Russian budget, and the UDC themselves were sold to Egypt, which in turn acquired helicopters and equipment for them from Russia. The cost of helicopters and equipment purchased by the Egyptian side is estimated at over one billion euros. 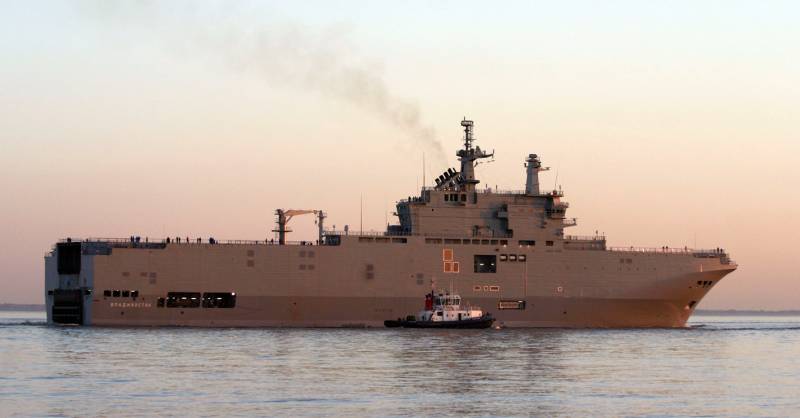 The failure of the attempt to acquire a UDC of foreign production did not reduce the interest of the Russian military leadership in ships of this class. Only now Russia is going to build amphibious assault helicopters with its own forces, work on their design began almost immediately after it became clear that France would not fulfill the signed contract. According to Izvestia journalists, at present, two concepts of the future helicopter carrier are under study in our country. As part of one of them, it is planned to build a DKVD on the model of the Dutch Rotterdam with a displacement of about 14 thousand tons and an air group of 6-8 helicopters, as well as a docking camera designed for 2-4 landing craft. Such a ship should provide for the transfer and disembarkation of a marines battalion of a maximum strength of about 500 people with weapons and equipment.

As part of the second concept, it is planned to build a UDC of classic aircraft-carrying architecture with a through-deck, displacement of about 24 thousand tons. Such a ship should receive a larger-scale air group - about 20 helicopters, realizing the concept of conducting an over-the-horizon assault landing in two waves, delivering ashore heavy weapons and equipment, as well as part of the personnel on amphibious boats across the sea, and parts with light weapons - by air . The number of paratroopers on a ship of this type will need to be more than 900 people.

Both concepts envisage the possibility of using helicopter carriers both as control ships and as floating bases during rescue / humanitarian operations, as well as solving other tasks. According to the interlocutors of the Internet portal iz.ru in the military department, the needs of the Russian fleet in such vessels are estimated at 6-8 units in the best option and at 4 - at the minimum. In the meantime, it is planned to build a series of only two ships. The two ships will not provide the fleet with the possibility of a permanent presence in the necessary areas, but will, if necessary, form the core of the expeditionary forces that will be able to solve tasks in remote theaters of war as the need arises. At the same time, the usefulness of amphibious assault helicopters, used as mobile bases for the operational deployment of military contingents during local conflicts, has been proven many times, starting with the 1960-s.

Sketch of promising Russian UDC
Four such ships as part of the Russian Navy would allow one helicopter carrier to be permanently kept at sea, another one - in a state of immediate readiness, the third - able to go to sea for military service in a few weeks, while the fourth ship could be upgraded or long-term repairs. The presence of 6-8 ships of this class would allow the Russian fleet to increase or rotate its forces in the regions where it is needed. Back in the middle of 2015, Anatoly Shlemov, who served as head of the USC Defense Procurement Order Department, said that the country needed 6-8 helicopter carriers, and the Ministry of Defense assessed the needs of the Navy for the 4 of the Priboy project ship.

In the meantime, there are plans to build only two landing helicopter carriers. So on May 25, 2017, the Deputy Minister of Defense of Russia Yuri Borisov told reporters that two helicopter carriers were included in the state arms program until 2025, while he did not then specify what projects were involved. Most of the information is known today about the UDC of the Surf project, the layout of which was first demonstrated as part of the Army 2015 forum. The Russian Ministry of Defense said that this project is an alternative to the French Mistrals. At the same time, everything will be Russian at Priboy: the aviation wing, landing and landing equipment, and weapons system.

It is known that the UDC of the project “Surf” will have a displacement of about 14 thousand tons with a draft of 5 meters. The maximum speed of the ship will be 20 knots (cruising approximately 15-16 knots), the maximum cruising range is 6 000 nautical miles, the autonomy of the hike being made is up to 60 days. Anti-aircraft defense of the ship are going to trust the anti-aircraft missile and artillery complex of the sea-based "Pantsir-M". On the take-off deck, the Surf will be able to accommodate up to 8 helicopters: anti-submarine Ka-27, transport-combat Ka-29 or shock Ka-52K. In addition, the ship will carry on board two amphibious boats “Moray” of the project 12061М and four amphibious boats “Serna” of the project 11770М. It is assumed that on board will be able to accommodate the order of 500 paratroopers and up to 60 units of various military equipment. According to the stated capabilities of the ship will be close to the landing ships docks of the type "Rotterdam". 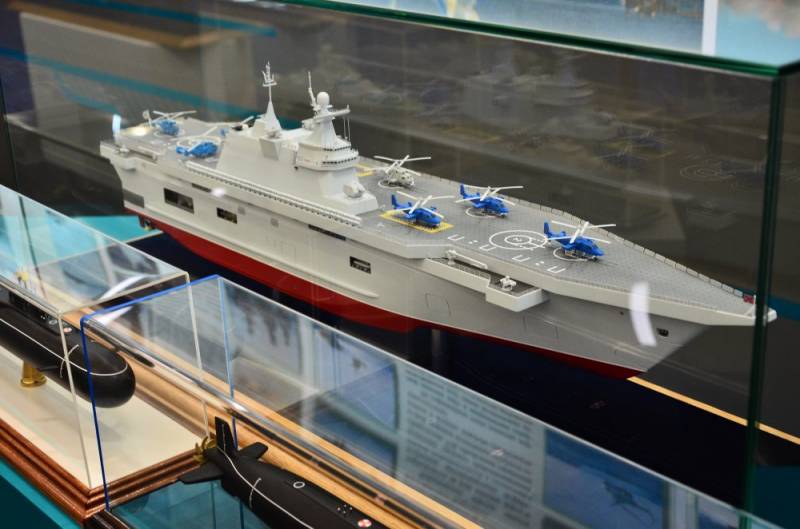 Layout of promising Russian UDC
At the same time, experts note that Russia so far has no sea-based serial helicopters that would fully meet the capabilities of the new ships. To fully utilize all the capabilities of modern UDC, heavier helicopters are needed than the Ka-27 and Ka-29 available in the Russian fleet (can take up to 16 soldiers), capable of taking on board before the platoon of soldiers and more like the European EH-101 (30 soldiers) or American MH-47 (from 33 to 55 soldiers) and CH-53 (to 38 soldiers).

It is known that the Russian Helicopters concern is currently working on creating a new family of sea-based helicopters, the work is being done under the cipher "Murena", while the estimated characteristics of this helicopter are still classified information. At the same time, the attack helicopter Ka-52K, which became the deck version of the famous military aircraft of the army aviation, which showed itself well during the conflict in Syria, is already ready to respond to the fire support of the landing force.

Depending on what kind of helicopter carrier project will be chosen for the Russian fleet - UDC displacement 14 thousand tons or 24 thousandth UDC, the price of the lead ship will be 30-50 billion rubles. The cost of the air group for a ship of this class could be 20 billion more rubles. But even with such a cost, landing helicopter carriers will continue to remain a fairly economical means of projection of force.

Ctrl Enter
Noticed a mistake Highlight text and press. Ctrl + Enter
We are
Media: Helicopter construction to begin at Severnaya Verf in 2020Results of the week. "Well, do not change me because of every idiot!"
88 comments
Information
Dear reader, to leave comments on the publication, you must to register.