School is under attack. What are the causes of the Perm tragedy?

January 16 2018
215
The terrible events in the Perm school didn’t really excite Russian society. Usually similar news we are used to getting from the United States, where schoolchildren are attacking their teachers and fellow practitioners very often. But now our country is faced with a similar problem.


The working day of Monday 15 January in Perm was already in full swing when two masked men, armed with knives, broke into secondary school No. 127. They pounced on the first schoolchildren who came in - fourth grade students. Got and teacher. And the injuries were inflicted professionally - beaten in the neck. Fifteen people were injured, three of them, including two children and a teacher, were seriously injured. Mostly young children suffered - fourth grade students 2006 and 2007. Then the attackers snapped at each other and staged a stabbing among themselves. Later, law enforcement officers issued a press release, which stated the version that two teenagers staged a fight with the use of knives, and the teacher and other children tried to separate the fighters, as a result of which they were injured. 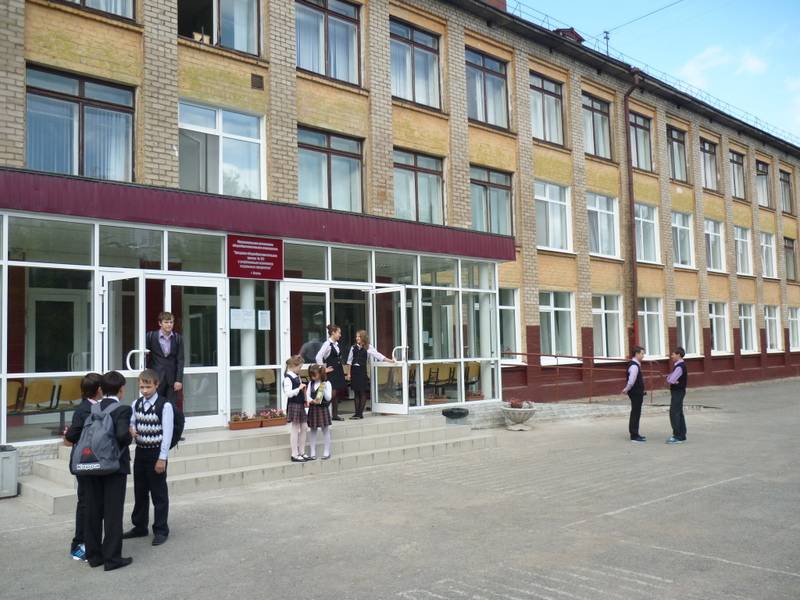 School number 127, located in the Motovilikhinsky district of Perm, is considered one of the best not only in the city, but in the entire Perm region. The specificity of this educational institution lies in the fact that here at the I — III stages of education, English and French are studied in depth, as well as subjects of the artistic and aesthetic cycle. Naturally, at that time many “best people” of Perm and the Perm Territory studied in such a school. This strange and tragic incident seems even more surprising.

We must pay tribute to the operational services: they reacted quickly and efficiently. Both attackers were detained. Established and their identities. The organizer of the attack was called 16-year-old Leo. Since the young man is a minor, we will not publish his personal data and photograph. It is known that Lev studied in the 127 school earlier, remained in his second year.

The page on the social network shows a very strange interests and hobbies of a teenager. For example, on the page hangs a video about the attack on the Columbine school that occurred in the United States in the distant 1999 year. Then, as a result of the attack of two armed students, 13 people died, and about 30 people were injured of varying degrees of severity. Interestingly, Lev has repeatedly spoken in social networks with offensive attacks against the Russian state, calling Russia a “country of slaves,” and he showed sympathy for the opposition movements. The accomplice of Lev B. was 16-year-old Alexander, a student in the 11 class of the school.

Naturally, the attack in the Perm school immediately caused a number of questions to the Russian society. It is clear that high-ranking officials - and the Perm administration, and the Russian Ministry of Education and Science, and the Ministry of the Interior - now say that they are keeping the situation under personal control. It is clear that the attackers, who are in the hospital, will be brought to criminal responsibility, and then either will be recognized as irresponsible, or sent to colonies for juvenile delinquents. But the question is not so much what to do with these specific young criminals, but how to ensure the safety of the Russian school, Russian children from the possible repetition of such antics.

A century ago, schools were perhaps the safest place. Attacking children, taking them hostage did not occur to even the most radical and dangerous terrorists of the late XIX - early XX centuries. People of the Population, anarchists, Social Revolutionaries, nationalists shot and blew up the ruling monarchs and members of their families, generals, ministers, ordinary policemen, bankers and businessmen, but they did not think about the attack on children. The situation began to change in the second half of the twentieth century, when ordinary people became the bargaining chip for terrorists. In the 1990-2000-s in the Russian Federation a large number of terrorist attacks occurred, hundreds of civilians, including children, were killed. But this is the activity of terrorist organizations, which is at least predictable. It is much worse when pupils themselves attack schools, which we observed until recently in the USA, and now we can, unfortunately, see in our own country. 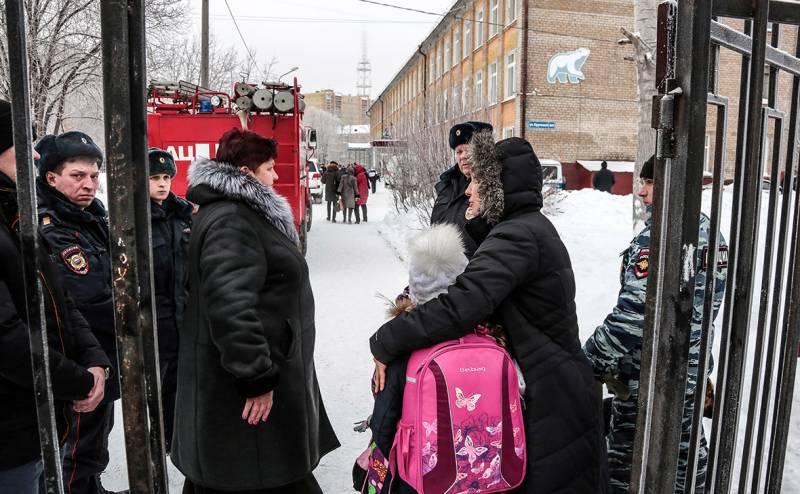 In Perm, immediately after the incident, an operational headquarters headed by the Perm Governor Maxim Reshetnikov gathered in the 127 school. Officials consulted and decided to tighten the requirements for security companies, ensuring the safety of schools in the region. However, we all understand what a school is and how difficult it is to ensure the real security of the institution and its children. Firstly, highly professional and numerous guards are very expensive. The average security guard - a pensioner or a peasant of pre-retirement age - will simply not be able to cope with a criminal targeting an armed attack on a school. Hire a whole security service staffed by professionals, the vast majority of Russian schools can not and can never. Yes, and it is hardly possible to turn the school into a “police object”, the entrance to which will be carried out through the framework of a metal detector under the strict views of professional security guards.

The Children's Rights Commissioner under the President of the Russian Federation, Anna Kuznetsova, asks rhetorical questions - how the armed criminals ended up at the school, why nobody stopped them, why the prevention of the commission on minors, where there was security, and so on did not work. But all this - ordinary duty phrases. In fact, everyone understands that the 60-year-old retiree janitor will not be able to detain young criminals. Even if he promptly calls the police, until an immediate response team arrives, the criminals will have enough time to commit atrocities - after all, shooting or stabbing is minutes, even seconds. Juvenile commissions work poorly in the country. Everyone knows that for juvenile offenders and criminals the law is very soft. Sometimes even violent criminals who have committed such dangerous crimes as robbery, robbery, rape are left free.

In 2014, a similar Permian stories The incident occurred in Moscow. Pupil of the tenth grade of school number 263, Sergei G. rushed into the school, armed with firearms weapons, he shot the geography teacher, took the students hostage, and when the police arrived at the school, he shot one of the police officers. However, the murderer did not bear the deserved punishment - he was placed in a psychiatric clinic. His father, against whom criminal proceedings were instituted after the incident under article 224 of the Criminal Code of the Russian Federation (“careless storage of firearms”), was fully amnestied in 2015 year.

President Vladimir Putin then stressed that the tragedy in the Moscow school could not have happened if the younger generation developed their aesthetic tastes and needs more. But can music schools or art circles influence the “street children” or lonely psychopaths whose problems are rooted in psyche, in a dysfunctional family environment, in bad relationships with teachers or other students?

As we see, for almost four years that have passed since the tragedy in school number 263 of Moscow, the proper conclusions have not been made. Officials talk about prevention, education of patriotic and aesthetic values, without asking much more important questions, namely, creating conditions for the inevitability of punishment for murderers and any other criminals regardless of their age (of course, this is about those who can already be involved criminal liability), social status of parents, etc., more serious attention to the psychological atmosphere in school groups, among students, to the psychological state of the students themselves, especially About if they are brought up in "crisis", problem families.

By the way, in many schools, the positions of psychologists-teachers and social teachers, who dealt specifically with “problem” students, could at least draw the attention of the school administration or the commission on juvenile affairs to students who are prone to aggression, to illegal behavior or, conversely experiencing problems with adaptation in the school team.

Another important problem has a socio-pedagogical character. In the post-Soviet decades in Russia there was a tremendous devaluation of the old moral and ethical values, among which was the respect for the teacher, for the teacher. The teacher's profession under the influence of both economic (low wages) and socially prestigious (lack of real social influence, low status in society) factors ceased to be valued, respect for the teacher from parents and from students decreased to a minimum. It is enough to analyze the comments under any articles devoted to school problems in order to understand how dismissively Russian society treats teachers.

Teachers have become “extreme” who owe everything to school principals and superiors from the district, parents of students, and even students themselves. Now schoolchildren who are not able to learn an elementary program allow themselves to criticize teachers, to accuse them of allegedly teaching incorrectly or lacking proper knowledge. Naturally, this situation has become possible because in the families of the students there is also no respect for the teachers. Teachers began to be perceived as attendants, owing for penny salaries not only to teach children, but also to endure their whims, hooligan tricks, rudeness of parents. Naturally, this situation affects the overall psychological atmosphere in the Russian school.

Meanwhile, the prerequisites for disrespecting teachers, the fall of the prestige of the teaching profession are formed "at the top." The state that assesses the work of a teacher with a higher education as a payment is guilty in this case, and the janitor, a guest worker, and regional and municipal officials, for whom the teacher is “always wrong,” will not agree to work. Seeing this attitude of the state towards teachers, parents are also “dismissed”, who are beginning to openly threaten teachers, trying to accuse them of the fact that children do not have enough intellectual resources to master the school curriculum. The manners of the parents are adopted by the students themselves. It is clear that scumbags or madmen who are able to break into a school with knives are encountered at any time and in any countries, but the problems of school education security in Russia are much deeper and more serious. 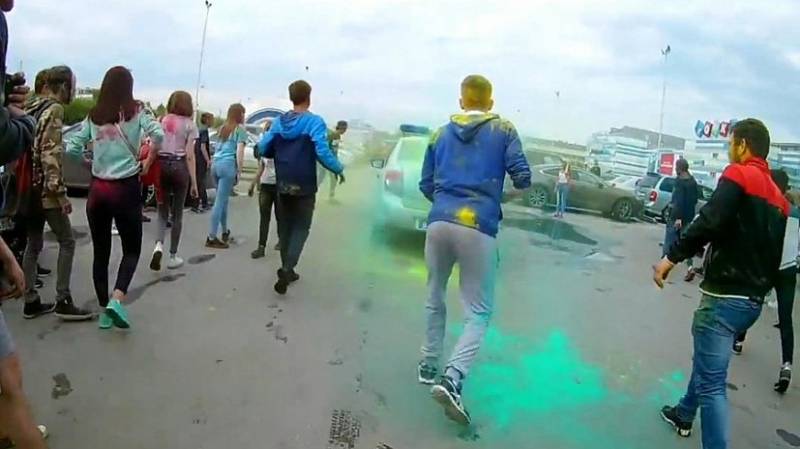 Recently, the spread of new youth subcultures of a criminal nature (the so-called “AUE” subculture - “The arresting way of unity”) has been discussed at the highest level in educational institutions in a number of Russian regions. These subcultures are most common in Eastern Siberia, primarily in the Trans-Baikal Territory, the Irkutsk Region. According to the law enforcement agencies, criminal youth subcultures covered orphanages and boarding schools, vocational schools, and most secondary schools. Educators and even police inspectors for juvenile affairs cannot cope with the proliferation of a subculture that idealizes the criminal world and the criminal way of life.

However, as practice shows, outbreaks of violence, like Perm’s stabbing or shooting at a Moscow school, are usually not related to the activities of such subcultures. Criminal subcultures to the constant activity of groups that impose a tribute to students, and members of these groups are more likely to commit crimes of a general nature - theft, robbery, hijacking of vehicles, fights. As for attacks on the school with weapons, such a model of action is more characteristic of eccentric "loners" offended by the world around them, often inventing even whole worldview systems permeated with contempt for other people and a cult of violence.

Olga Vasilyeva, Minister of Education and Science of Russia, received an instruction from Prime Minister Dmitry Medvedev to go to Perm and deal with all the circumstances of the incident on the spot. But this visit is unlikely to entail any changes in the system of Russian school education and the upbringing of the younger generations. Orders, decrees and meetings can not be remedied by the deplorable situation - more extensive measures are needed, moreover, taken in close connection with other measures of a social and economic nature.