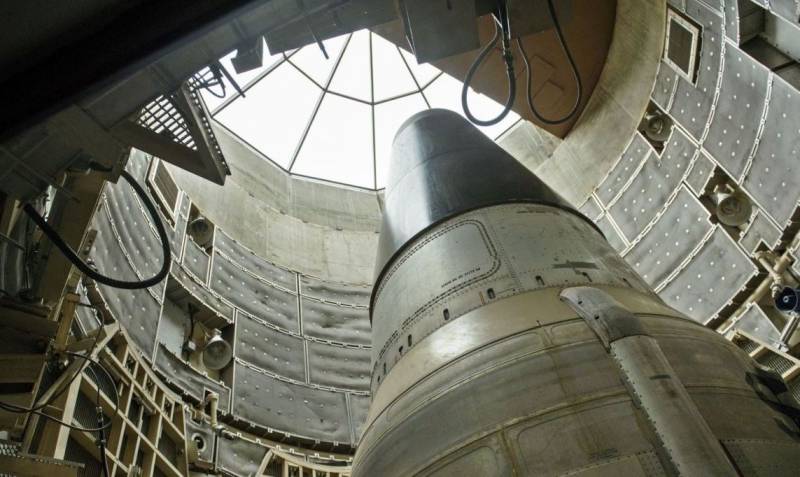 The American Huffington Post has published an unclassified version of the draft new US nuclear doctrine. The fear that this publication may be a fake and foolish to try to analyze the doctrine before its official publication is removed by a note by the US Department of Defense, which does not deny the authenticity of the document published by the Huffington Post, although it refused to publicly comment on the project. It should be understood that after the completion of the text and its endorsement by the Secretary of Defense James Mattis and President Donald Trump, such comments will certainly follow.

However, we do not need to wait for the official promulgation of the doctrine in late January - early February to see in it, even at the project level, a pronounced anti-Russian charge. Russia (along with China, the DPRK and Iran) is directly named in the document as an increased external threat to the United States.

The Pentagon received the order on the preparation of a new nuclear doctrine from D. Trump a year ago. Everything is logical: in the pre-election speeches, and then in various interviews as the newly elected head of state, Trump spoke negatively about the Russian-American START-III treaty, calling it "unilateral", beneficial only to Russia, since it allegedly allows it, unlike the US , continue to produce nuclear warheads.

Accordingly, Trump is not satisfied with the current US nuclear doctrine, adopted under his predecessor B. Obama in 2010. It is not difficult to guess why he is not satisfied. Obama, considering the United States to be obliged to maintain a “reliable and effective arsenal” of nuclear weapons, albeit in a declarative form, but considered a possible reduction of nuclear weapons (it was under Obama that the START III treaty was concluded).

D. Trump's such "duality" does not fit. The cowboy’s manner peculiar to him rudely impose on the opponent his own ideas leave no room for reasonable arguments.

Thus, in the 2010 doctrine, the United States retained the right to launch a nuclear strike first, but declared a refusal to use nuclear weapons against states that did not possess such weapons. Under D. Trump they refuse this obligation. Under "extraordinary circumstances, to protect the vital interests of the United States, allies and partners," the new nuclear doctrine project says, they are ready to use nuclear weapons in response to "non-nuclear strategic attacks." There is a reservation in the document that such emergencies may include “attacks on the civilian population of the United States”, their allies and partners, or civilian infrastructure in these countries, as well as attacks on the nuclear forces of Washington and its allies, command and control bodies such as on the objects of attack warning.

However, this reservation does not mean much, considering, as noted by the First Deputy Head of the Federation Council Committee on Defense and Security, Franz Klintsevich, Washington’s expansive interpretation of the very "vital interests of the United States, allies and partners." In essence, the senator said, “the doctrine provides carte blanche for the use of nuclear weapons.”

At the Pentagon, it is not hidden. The idea to commit ourselves not to be the first to use nuclear weapons “today is unjustified ...” is emphasized in the draft nuclear doctrine. “US policy remains to maintain a certain ambiguity regarding the exact circumstances that could lead to a US nuclear response.”

So: ambiguity in politics, on which the fate of the world depends!

Russia is accused of first intending to use nuclear weapons. “The greatest concern is caused by the policy, strategy and doctrine of Russia's national security, including an emphasis on the threat of limited nuclear escalation ... Moscow threatens the limited use of nuclear weapons first, suggesting an erroneous calculation that nuclear threats or limited use (atomic warheads. - Red .) the first is capable of paralyzing the United States and NATO and, thus, ending the conflict on terms favorable to Russia, ”the American document says.

Where and when, one wonders, is "Moscow threatening"? In this sense, the published version of the draft new US nuclear doctrine is a blatant lie.

It is obvious that the administration of D. Trump would like to untie his hands in building up nuclear arsenals and in using nuclear weapons. To do this, she goes to a direct forgery, stating the "advantage of Russia in this area."

As is known, the following ceiling was established by the START III treaty: by 2021, each side should have no more than 700 deployed strategic carriers (intercontinental ballistic missiles, ballistic missiles on submarines and heavy bombers) and no more 1550 nuclear warheads on them. According to the data available for the middle of 2016, the ratio of the nuclear arsenals of Russia and the United States looked like this: carriers — 508 and 848, respectively, warheads — 1796 and 1367, respectively. Talking about some advantage of the Russian Federation, and even extracted allegedly illegally, in violation of the agreements, is simply absurd, while in accordance with START III, Russia even has the legal right to significantly increase the number of carriers.

In essence, the new US nuclear doctrine is the propaganda rationale for the new round of the nuclear arms race launched by Washington. At the end of 2016, it was announced that the Pentagon plans to get at least 400 intercontinental ballistic missiles of the new generation, which should replace the new-generation ICBM ground alert 1970, as part of the program for modernizing the nuclear missile arsenal. based "Minuteman". For these purposes, up to 2044, $ 62 billion will be spent, of which $ 14 billion - for the modernization of command and launch systems and about $ 48,5 billion for the creation of new warheads.

These astronomical sums today is not enough. In late December, Trump approved the budget of the US Department of Defense for 2018, it will be $ 700 billion, $ 81 billion more than in 2017 year. Additional expenses were required for the implementation of plans for the further modernization of the strategic nuclear potential. It also announced plans to modernize some missiles on submarines and a nuclear-tipped cruise missile.

For comparison, and in the order of information about those who really unleash an arms race: the Russian military budget for 2018 is $ 46 billion. But even with these, incomparably smaller than in Western countries, military expenditures have significantly improved the quality of the Russian armed forces. As was reported at the extended meeting of the 22 XDUMX December Board of the Russian Defense Ministry, which was held with V. Putin’s participation, over the past five years, the army and navy received 2017 intercontinental ballistic missiles, 80 submarine ballistic missiles, three Borey missile cruisers , 102 spacecraft, 55 rocket regiments re-armed to the Yars complex, and 12 rocket brigades to the Iskander complex.

“We do not rattle weapons and do not intend to fight with anyone. At the same time, we do not advise anyone to test our defense capability for strength ”- these words of the Minister of Defense of the Russian Federation S.Shoigu were spoken in the ears of the authors of the new US nuclear doctrine.