The latest Russian flamethrower system raises a number of complaints

January 17 2018
32
In Russia, the preliminary tests of the newest flame-throwing system “Tosochka” begin, which will continue the traditions of the “Solntsepek” known from the fights in Syria. The Syrian experience prompted gunsmiths to rearrange the system from tracks to wheels, which would make the car movable but vulnerable when firing direct fire. And can Toshochka on wheels be able to travel off-road in Russia itself? 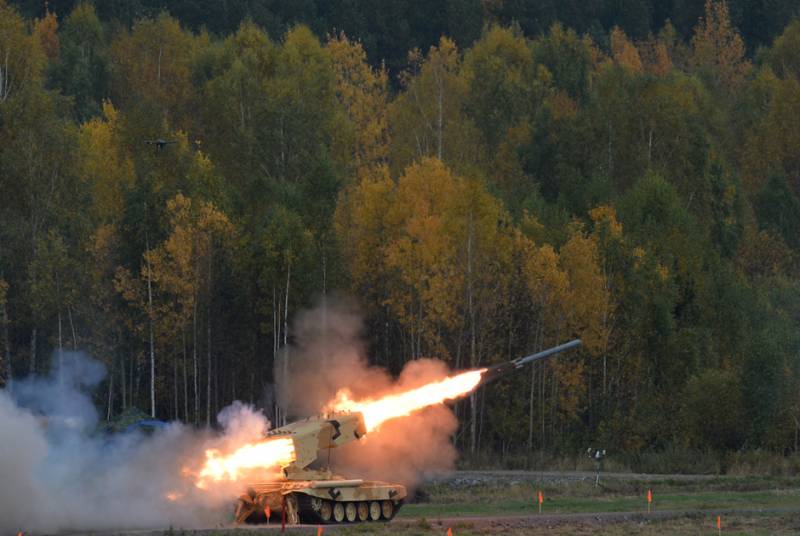 On Friday, the general director of Tekhmash, Vladimir Lepin, announced the start of work on the creation of a test sample of the newest heavy flamethrower system Toshochka.

“The production of a prototype of the new generation of the heavy flamethrower system“ Tosochka ”for preliminary tests is underway at NPO Splav,” Lepin said. “A system with improved tactical and technical characteristics will be implemented on a wheeled chassis.”

“Tosochka” is the heiress of the 1А heavy flame-thrower “Solntsep”, successfully used in the Syrian campaign. Deliveries "Toschki" troops laid in the armament program 2018 – 2025's.

The editor-in-chief of the magazine Arsenal of the Fatherland, Viktor Murakhovsky, is confident that the fire weapons of destruction of the new type of Toschka will remain the same. In ammunition, which is armed with both TOC-1 (“Pinocchio”) and TOC-1A (“Sunlight”), a thermobaric mixture is used, which provides for the bulk destruction of enemy targets and their manpower. The controls, he said, will not change either.

“The main difference of the new generation“ Tosochka ”is in the chassis. Compared with tracked chassis, it provides a higher rate of operational maneuver on roads and column tracks ",

- said Murakhovsky to the VIEW, adding that such systems are unlikely to work at the leading edge due to limited wheel stability - compared to the tracks - to the enemy’s return fire, therefore, the new "Toschkas" will probably have to "carry out salvoes from closed firing positions, and not direct fire. "

"This is the main difference from the TOC and TOC-1А systems, which can work in the line of sight of the targets being hit," the expert explained. However, in Syria and Iraq, “Toschka” on wheels can also be involved at the forefront.

“We must take into account the peculiarity of the battle against illegal military units (illegal armed groups) in Syria and Iraq. These illegal armed groups, as a rule, do not possess heavy weapons. They didn't have aviation, precision weapons, a very limited amount of artillery. Apparently, these features have necessitated the development of the “Tosochka” system on a wheeled chassis, ”suggested Murakhovsky.

In addition, in the conditions of the Syrian desert there is no solid front line, and such equipment often has to be redeployed to different positions. This, apparently, was an additional argument in favor of transplanting a flamethrower system on a wheeled chassis.

“When it is necessary to make a tactical operational maneuver for a long distance, equipment on a heavy tracked chassis is usually transported on special trailers — just so as not to waste the scarce resource of such a chassis,” Murakhovsky explained.

Member of the Public Council under the Ministry of Defense, Director of the World Trade Analysis Center weapons Igor Korotchenko also believes that the main difference between Tosha will be the chassis, but does not rule out other changes.

“Modernization of ammunition is always underway, it is a continuous process. It is possible that it will become more powerful due to some decisions, the range of the shot and the area of ​​destruction will increase, ”the expert suggested in the commentary to the newspaper VIEW.

“For a number of countries, in particular, the Middle East, the wheeled chassis is more preferable than the crawler, given the smooth nature of the terrain. This is just diversification. I suppose, under possibilities of export deliveries, - Korotchenko noted. - For our own Ministry of Defense, a tracked chassis is preferable, given the expanses of Russia and often the complete lack of roads. However, everything will be determined by the customer himself, the buyer. ”

What specific chassis will be selected for the "Toschki" is still unknown. “It is obvious that in the Ministry of Defense TTZ the chassis requirements are formulated. Everywhere we have KamAZ now offers and promotes its chassis. It is possible that it can be chosen, ”Korotchenko noted.

Other plans of "Fusion"

Murakhovsky does not undertake to predict whether Tekhmash will meet the required deadlines, that is, he will have time to put Toshoch in troops or for export before 2025, recalling that the terms of design work are usually set by the Ministry of Defense.

"Tehmash" now quite dynamically solves all issues related to the state defense order. There are big positive changes, good funding has gone. There are good chances that the deadlines will be maintained, ”Korotchenko, in turn, suggested.

As recalled by TASS, Rostec at the end of last year decided to include "Splav" in the holding "Tehmash". According to Lepina, last year they began to expand production capacity at Splava. In particular, a new workshop was acquired, which is scheduled for commissioning next year. The mass production of shells for the newest Tornado-S rocket launcher system will be deployed on this site.

According to Lepin, at the same time a new direction for “Splav” will be mastered - the production of combat and transport-charging vehicles. After that, "Splav" can be considered not only an experimental production, but also a serial one. The new workshop will also start producing regular projectiles for the Grad multiple rocket launcher system.

Ctrl Enter
Noticed oshЫbku Highlight text and press. Ctrl + Enter
We are
Commentary on A. Petrov's interview “Fire and Tactics in the Russian Army: Another Look”What you didn't want to know about England
32 comments
Information
Dear reader, to leave comments on the publication, you must to register.