From inauguration to impeachment: how Trump's “shameful” will be thrown to the dustbin of history

January 16 2018
37
The fact that Donald Trump has become a real "shame" for the United States and that it can be thrown off already in 2018 year, was told by the bold British newspaper The Guardian to the general public. There is an opinion that Trump will not stay in the White House until the end of this year. 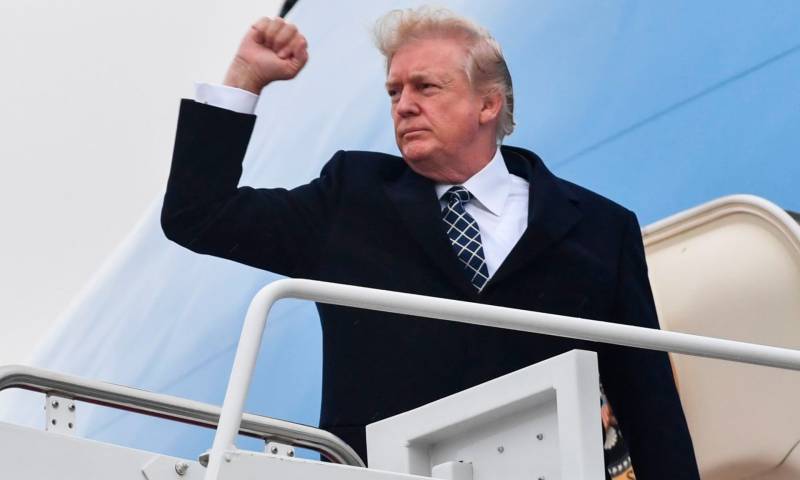 President Trump "dishonors his country" at various levels. Probably in 2018, he will finally be held accountable for his actions. The British newspaper writes about this in an editorial. «The Guardian».

Almost a year ago, Donald Trump was sworn in as the 45 US President. Will he sit still on the throne for 12 months? Since January 20, 2017, Trump has not tired of giving the world more and more new evidence of his presidential "unsuitability."

The point is not only in the editors' opinion, that its foreign and domestic policy consists of a series of “catastrophic mistakes - from tax cuts and policies on climate change to the question of Palestine and nuclear weapons».

The point is not only that the very idea of ​​its leadership is "contradictory, confrontational and irresponsible."

Trump's problem is not exclusively related to "his blatant racism, misogyny and chauvinism," although this is in fact "enormous problems."

His last “outrage”, when he called the developing countries “dirty holes,” terrifies with its stench.

The fundamental flaw in Trump’s presidency is his ignorance. His "often irritated and infantile behavior" is combined "with a stunning lack of knowledge and contempt for the facts." Hence the series of Trump’s “chronic misunderstandings”.

Trump in power can not be trusted, the editorial board continues. This person is “shamelessly deceitful, cynical, inconsiderate, or not interested in strong human and constitutional values.” Trump is the first, and probably the last of its kind, “anti-American president,” the publication points out. He is "a shame and a danger to his country." “The sooner he is dismissed, the better,” says The Guardian.

How long do Americans intend to tolerate his presence in the White House? The "rent" of their office can continue until November 2020. But he can still try to go for a second term!

However, a number of scenarios brought to life by his “infinitely destructive, unacceptable statements and actions” may lead to his “early departure” from the White House.

The first and “most desirable” scenario: the electorate rejects Trump. And this process "is already underway, according to opinion polls." Over the past year, Trump's personal approval rating has averaged less than 40%, which indicates the president’s unpopularity. In addition, the Pew research center survey last month disproved the myth that Trump's “base”, i.e., its main support, remains. Trump's support for key groups that helped him come to power (white people, Protestant evangelicals, people older than 50 for years, and people without college education) dropped significantly across all states.

A survey conducted by the University in Monmouth last August showed that 61% of Trump’s voters said they couldn’t think of anything that Trump would do in the future and turn them against him. The corresponding poll, conducted in December, gave only 61% instead of 37%.

Forecasts suggest a staggering increase in negative attitudes toward Trump. What was previously called the “disorder of Alabama," is projected onto the whole country.

In the end, the Republican Party may lose control of the House of Representatives, where a large number of moderate Republicans retire. Their control over the Senate is supposed to be weakened by the “tsunami against Trump”. Not a single party since 1950 of the year retained such control if the president’s personal approval fell below 40%.

Voter’s abdication of Trump, coupled with the loss of influence of his supporters in the US Congress, can cause the throne under the president to falter. Most Republicans will deny him, thereby condemning him to shame.

And here is another scenario. And he leads in perspective to the "political demise" of Trump. This script is also already running.

Of course, nobody knows yet whether the federal investigation into Trump’s alleged conspiracy with Russian influence agents will ultimately compromise the president himself. And yet it is openly claimed that Trump entered into such a conspiracy to thwart justice, put pressure on the FBI and dismissed director James Komi. These charges can kill the Trump presidency. Robert Müller, the special prosecutor, has already offered to formally question the president under oath.

However, this is not the end of Trump. His supporters point out what they consider to be a consistent chain of success for the president. Here is the stock market - it has grown by 7 trillions of dollars, here are the jobs - there are more of them by 2 million, and here is another radical tax reform. Also, Trump is “given a loan” in the form of an upcoming victory over the “Islamic State” (prohibited in Russia) and in the form of a future reduction of illegal immigration.

And some of this really works: the number of Americans saying that the US economy is in "great shape" jumped from 2% in November 2016 to 18% today. About 48% today they say that the economy is “good,” and this is 11 percent. points more than the specified period before.

And Trump's slogan “Let's make America great again” can start working, which is likely to slow down the speed at which Trump will retire after losing the electorate.

But in the meantime, the president caused chaos in the White House and in the world. According to Michael Wolfe, author of the book “Fire and Rage,” for “reality shows” in the White House are characterized by “flashes of anger, tears and irrational rage”. All this "dominates", as if on TV.

Trump showed himself in terms of migration and race as an ardent nationalist, even as a fanatic.

At the international level, Trump is likely to provoke a nuclear war with North Korea.

He struck the world community, abandoning the climate agreement. He came to threats against the United Nations when he spoke about Jerusalem. He struggled to thwart the landmark 2015 agreement of the year signed with Iran. Finally, he almost did nothing to stop the conflicts in Syria, Yemen, South Sudan and Afghanistan.

The worst thing is that he openly despised the partners and allies of the United States in Europe, but he tried to get close to authoritarian leaders in China, Russia and the Middle East.

Regarding Britain, the editorial staff of the British newspaper notes, he showed "either condescension, now contempt."

The publication suggests that such a "dysfunction" may indicate a personality disorder of Trump. Trump's mental instability is admitted by "many people."

Therefore, it would be better if Trump bore responsibility for his actions, the editors summarized. For his "ignorance, dangerous lies and anti-American fanaticism" he should be "brought to justice." And, perhaps, this will be done in 2018 year.

It is unlikely, we note, the impeachment will take place in the current year. Today, Mr. Trump is doing what even his former opponents, for example, John McCain and his colleagues in the US Senate, fully approve of. «Bloomberg» indicates that the US Treasury is finishing work on a list of Russian “oligarchs” close to Putin and his government. And the Russian rich are already panicking.

According to sources, other people who admit to the “black list” are now making predictions about their unhappy future. Others frantically sell off assets. Some people turned to the United States to those who had previously worked at the Ministry of Finance and the State Department and had experience in the field of sanctions. These rich Russians are trying to do everything to avoid falling into the black list. This publication said the former State Department Officer D. Fried. He already had to reject some of these requests.

And in this situation, the anti-Russian lobby in Washington is unlikely to start "overthrowing" Mr. Trump. In recent months, even the noise associated with the Russian ties of the president has subsided. And the aforementioned Senator McCain is slowly turning into Trump's supporter: he approves of the president’s new strategy towards Iran and work on drawing up a list of Russian “oligarchs” close to Putin. Earlier, McCain was outraged by the "tightening" of the list, but now this criticism is over. Probably, Trump would be the ideal of the president for McCain and his associates, if he had even armed Ukraine to the teeth.

In short, Trump has something to object to his opponents. The British press is completely sad if a supporter of the arms race Trump goes to 2020 for a second term ...

Observed and commented on Oleg Chuvakin
- especially for topwar.ru
Ctrl Enter
Noticed oshЫbku Highlight text and press. Ctrl + Enter
We are
Situational analysis of the death of the MH17 flight (Malaysian Boeing 777), made on the basis of engineering analysis from 15.08.2014Syria: Americans scare themselves, and Asma Asad buys chairs
37 comments
Information
Dear reader, to leave comments on the publication, you must to register.