Virtually all military weapons today can easily be grouped into two unequal in size groups. The first is an ordinary weapon for a linear fighter, which has a set of balanced characteristics, combining at the same time low cost, high reliability, efficiency and simplicity, as well as special-purpose weapons. A rather unusual project of Russian gunsmiths - a program to create small arms for special forces called Exhaust. The most prominent representative of this program was the large-caliber Russian ASH-12.

At the beginning of the 2000s, when there was a turning point in the course of the second campaign in Chechnya, the Russian special units had already accumulated quite a wide experience in conducting military operations under special conditions. First of all, it was about assault tasks solved in the conditions of low-rise rural and high-rise urban development, mountainous terrain. Given this specificity, the special forces fighters needed weapons for short-range combat, which had a high bullet momentum, capable of piercing, if necessary, substantial obstacles of brick or stone, as well as possibly allowing silent shooting. 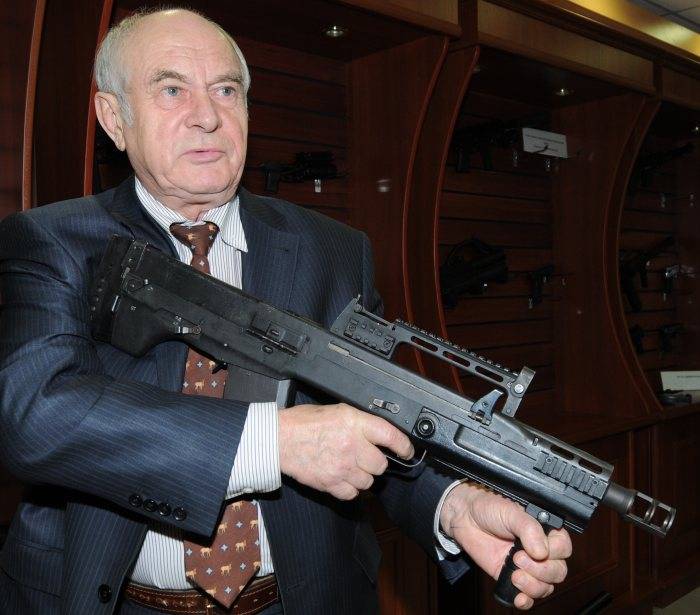 Viktor Zelenko, Chief Designer of TsKIB SOO for small arms and cannon armament, demonstrates an assault rifle ASH-12, photo: Ilya Kedrov, magazine "National Defense"
As part of the implementation of this request, the Special Purpose Center of the Federal Security Service of Russia, the Central Design and Research Bureau of sports and hunting weapons in Tula has begun to create a new large-caliber complex for special forces, designed for the 130 mm cartridge SP-12,7 specially designed for the new line of weapons. By analogy with the already existing pair of AS Val and ASV Vintorez rifles, the complex consisted of a large-caliber ASH-12 assault rifle, Vsshp VSSK sniper rifle, and an RSH-12 assault revolver. In more detail we will focus on the machine, which was first presented to the general public in 2005 in Moscow during the exhibition Interpolitech.

ASH-12 is a representative of high-performance "assault" melee weapons. The main and very bright distinctive feature of this weapon rightly refers to the used large caliber cartridge 12,7x55 mm, which provides a high stopping effect of the bullet while reducing the likelihood of third party damage due to the rapid loss of energy of the bullet while increasing the shooting distance. During the operations conducted by the special units, this is especially important.

12,7x55 mm SC-130 cartridge is a Russian rifle ammunition developed by TsKIB SOO specialists for flameless and low-noise destruction of protected targets and manpower in heavy body armor at a distance of up to 600 meters. One of the requirements of the tactical and technical assignment, in which the new cartridge was created, was its substantial superiority over the standard 9x39 mm cartridges (used with the Val and ASV Vintorez systems) in terms of real fire and striking action. The SC-130 cartridges use specially made weighted bullets and relatively short cylindrical sleeves with a length of 55 mm. The energy potential of such an ammunition is only enough for a subsonic shot. Standard rifle bullet caliber 12,7 mm weighs about 50 grams, the bullet subsonic rifle caliber 12,7x55 mm can weigh from 50 to 76 grams. The total length of the 12,7-mm cartridge SC-130 is 97,3 mm against 147,5 mm for the “ordinary” Russian cartridge 12,7-X108 mm.

ASH-12 with magazine on 20 cartridges
Due to the comparatively small (for the designated caliber) muzzle energy, small arms for the new cartridge turned out to be almost 2,5 – 3 times lighter than sniper rifles designed for using conventional large-caliber cartridges — domestic 12,7X108 mm or NATO 12,7XXNNXX mm. The ASH-99 assault rifles and the RSH-12 revolver use 12x12,7 mm cartridges created on the basis of the cylindrical sleeve of the 55 × 12,7 subsonic rifle cartridge mm СЦ-55 for the Vyhpot silent sniper rifle VSSK. Four variants of the cartridge for automatic weapons and revolvers are known: the PS-130A light bullet cartridge, the PS-12 bullet cartridge, the PD-12 cartridge with a tandem bullet (two-cartridge) and the PS-12B armor-piercing bullet cartridge.

The lightweight bullet of the PS-12А cartridge has a bare hollow core made of aluminum and a bimetallic shell; the mass of the bullet is of the order of 7 grams. The muzzle velocity of this bullet exceeds the speed of sound, but the combination of a large caliber and a small mass of the bullet leads to the fact that it quickly loses its speed and energy with increasing firing distance. The effective firing range using this ammunition is limited to 100 meters, while the bullet of this cartridge has a very high stopping effect on the target at a specified distance.

The PS-12 cartridge with a bullet is intended primarily for use in combination with a silencer, the heavy bullet of this cartridge has a subsonic initial flight speed. The armor-piercing bullet of the PS-12B cartridge is able to confidently hit most body armor known to date and poses some danger even for lightly armored enemy vehicles at short distances. The two-cartridge (duplex) cartridge with a tandem arrangement of bullets PD-12 is the most unusual of the presented cartridges. Such ammunition is used to create a high density of fire, for example, the barrage of fire. At the same time, some experts doubt the advisability of using such a cartridge with weapons of this class.

ASH-12 with a silencer and a magazine for 10 cartridges
Undoubtedly, the Russian large-caliber assault gun is considered to be the most powerful weapon in its class in the world. This is achieved through the use of a powerful low impulse cartridge SC-130 12,7х55 mm, which has the same caliber as the cartridge of the famous DShK machine gun. Due to the designated family of ammunition for various purposes, the ASH-12 machine, according to the developers' plans, must successfully solve a wide range of tasks to neutralize the enemy. However, it’s mostly about theory. Currently, nothing is known about the experience of practical combat use of the ASH-12 assault rifle and its ammunition. These data could most fully demonstrate the effectiveness of these weapons. True, it is worth considering the fact that the ASH-12 machine gun developed by the Tula TsKIB SOO specialists was adopted by the special forces of the FSB of Russia relatively recently - in the 2011 year, and most of the information on the design and experience of the combat use of such weapons is secret and not disclosed.

Separately, we can note the revolver complex RSH-12, which is a revolver with a solid metal frame and a reel, designed for 5 cartridges, which is tilted to the left. Used the same ammunition as in the ASH-12. The revolver stands out from its large-caliber counterparts with the following structural feature - due to the fact that the shot from the revolver is made from the lower chamber of the drum, the recoil shoulder of the RSH-12 model is less than that of most pistols and revolvers of the same caliber. Reducing the recoil shoulder leads to the fact that the revolver is also thrown up when fired. This technical solution, in which the shot is carried out not from the upper, but from the lower chamber of the drum, has previously been implemented in the OTs-38 revolver designed by Igor Yakovlevich Stechkin.

The large-caliber assault AS-12 assault rifle is built according to the bullpup scheme, which is not the most common for the Russian rifle school. With this scheme, the trigger along with the pistol grip are brought forward, they are in front of the magazine and the percussion mechanism. Designers have resorted to such a scheme when creating small arms in order to make it smaller and also to achieve greater accuracy in firing in bursts. 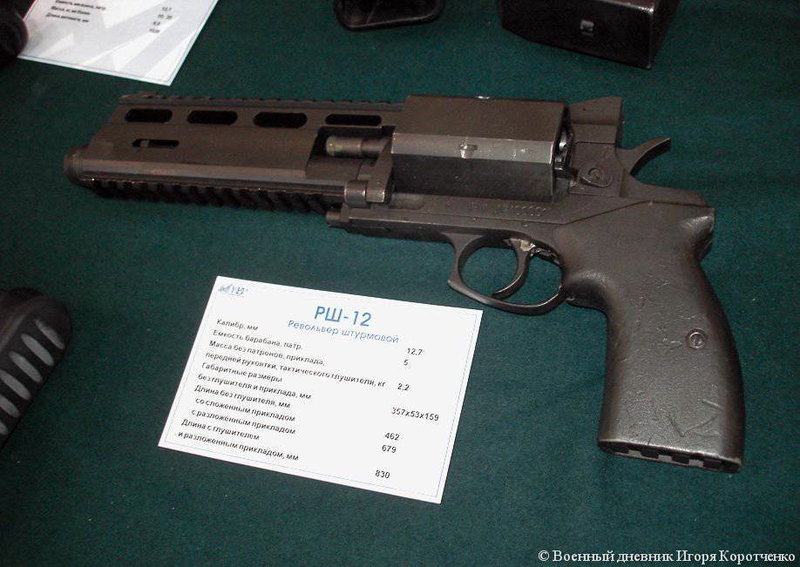 The receiver box of the ASH-12 is made of steel by stamping, and the box, handguard and pistol grip are made of modern high-impact plastic. In the assault machine applied automation, which uses the recoil energy in the short course of the barrel (the barrel is less than the stroke of the gate). Locking the barrel by turning the shutter. The shutter handle is located on the right side of the machine. The machine is powered by cartridges from detachable box-shaped double-row magazines designed for 10 or 20 cartridges. The translator of firing modes and the weapon safety device were made in the form of separate levers. The lever for translating fire modes is located at the rear of the machine behind the magazine, and the safety lever is located above the pistol grip for fire control.

To reduce recoil force during firing, the ASH-12 was specially equipped with a two-chamber muzzle brake-compensator, as well as a rubber butt plate. Instead of a muzzle brake-compensator, a muffler can be installed on the muzzle of the barrel for special tasks. There is also a version of a weapon equipped with an integrated drum-type grenade launcher (a rifle-and-grenade launcher complex). A window designed to eject spent cartridges is protected from dirt by a special hinged lid, like the American AR-15 / M16 automatic rifles.

The handle for carrying weapons can be equipped with a guide - a Picatinny-type rail, designed for mounting various types of sighting devices - optical and collimator sights. The machine can have several different configurations - with a carrying handle located above the receiver. The sights are integrated into the handle - an open sight with a full dioptric sight and a folding front sight. There is also a version without a handle for carrying weapons with sights on folding bases and a Picatinny guide rail located directly on the receiver. Fly on a folding base was transferred to the front of the receiver to increase the length of the sighting line, which, in turn, leads to an increase in accuracy. The rear sight is aperture, which gives the shooter an advantage in speed and accuracy of aiming, as well as in ease of use in low light compared to conventional open sights.

ASH-12 with an integrated drum-type grenade launcher
Due to the wide range of created ammunition caliber 12,7 x55 mm, the ASH-12 submachine gun has exceptional flexibility in solving various tactical tasks at ultra short and short combat distances. The advantages of weapons include the terrific stopping effect of a bullet that can stop forever not only a criminal or terrorist under the influence of various kinds of narcotic drugs, but also a fairly large animal, for example a forest predator. The armor penetration of cartridges at a distance of up to 100 meters makes it possible to overcome the protection of body armor of all classes of protection, fire through obstacles, metal doors and confidently hit unarmored and lightly armored vehicles of the enemy.

The technical rate of fire of the ASH-12 assault rifle is 650 rounds per minute. Box stores designed for 10 or 20 cartridges cannot be classified as roomy, but for a melee, this capacity of the stores should suffice. The main disadvantages of weapons include its large size - more than a meter in length and heavy weight - about 6 kilogram (with a loaded magazine and body kit), all of this is attributed to the costs of using large-caliber ammunition. At the same time, the ASH-12, despite its apparent roughness and massiveness, has exceptional shooting accuracy in contrast to the close caliber representatives of shotgun or shotgun weapons and, moreover, lighter rocket launchers, allowing the special forces to solve their tasks practically in a surgical style.

Ctrl Enter
Noticed oshЫbku Highlight text and press. Ctrl + Enter
We are
Scuba weapon goes into seriesAutomatic guns for armored combat vehicles. Point of view of a Western specialist
27 comments
Information
Dear reader, to leave comments on the publication, you must to register.