Features of the use of commercial drone by ISIS terrorists 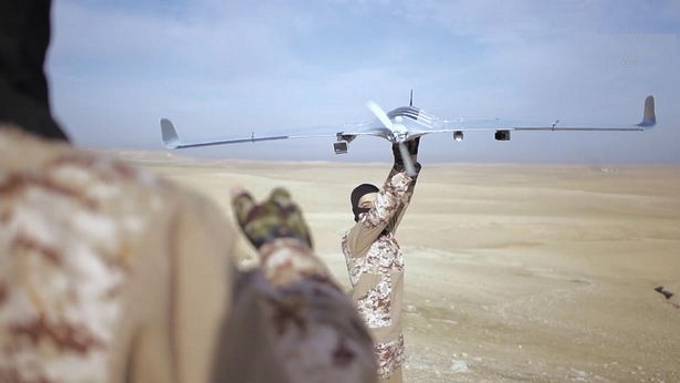 The steady decline in the number of ISIL militants with a practically exhausted personnel reserve forces them to resort to more economical use of human resources. In the end, it turned out that the ubiquitous stories about paradise for the destroyed Islamist militants did not inspire them to great deeds and willingness to lay down their head in the dusty expanses of the Levant. In addition, an incredible number of begging people with disabilities in Mosul and Raqqah, which, despite the attempts of ISIL to pay benefits, further undermines the confidence in the fighting capacity of the already not very skilled militants who had literally suppressed the enemy by the amount of.

Therefore, now one of the ways to constantly keep the enemy in suspense for ISIS is the massive use of unmanned aerial vehicles. Being relatively inexpensive devices, drones after a small “file completion” turn into quite combat-ready vehicles, which allow you to drop improvised explosive devices on the enemy’s head.

As a rule, the ISIL militants, through their “Mine Action and Disruptive Activity Management”, acquire two types of drones, of aircraft and helicopter types, and the share of the latter significantly exceeds the number of aircraft UAVs. Paradoxically, the losses suffered by ISIL in the last two months only increased the procurement terrorists ’capabilities, since a significant amount of funds that had previously been used to supply and pay off militants who had been destroyed were freed up. ISIS's “Financial Council”, perfectly aware of the need to preserve the fighting capacity of militant groups and the importance of propaganda releases, does not hesitate to raise the costs of drones ranging from 100 to 250 dollars apiece, which are purchased and delivered in Turkey to Syria and Iraq through fractional lots. 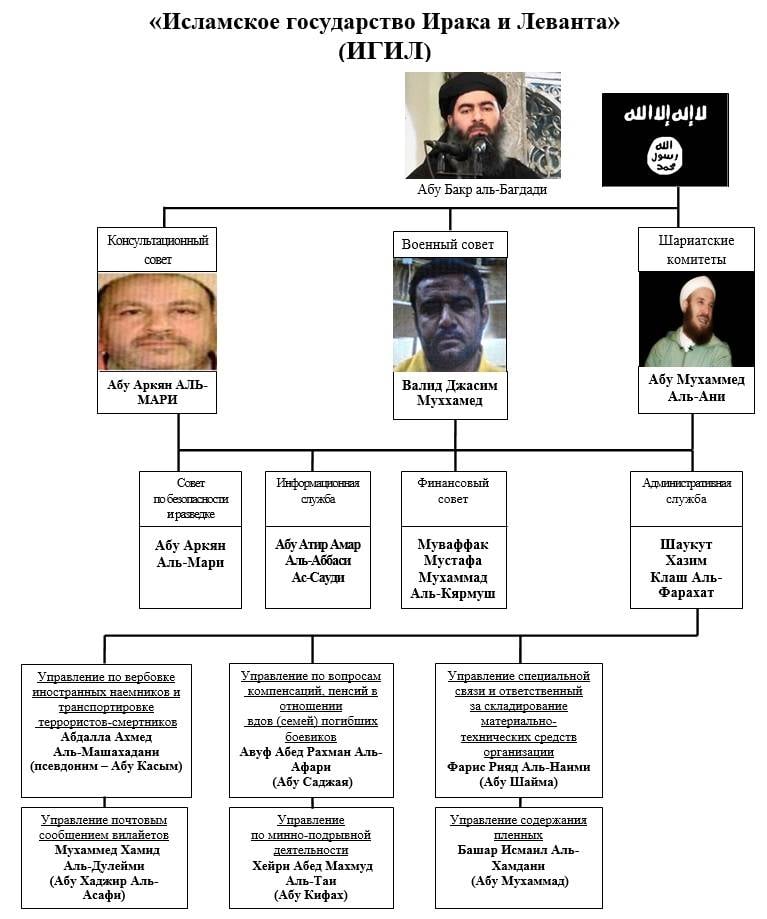 At the same time, ISIS does not care about things generally accepted in the regular armies of the world, such as certification and special verification of purchased products. The refusal of these procedures can significantly reduce the cost of the wholesale batches of UAVs.

Now ISIS uses drones in two versions: reconnaissance, shock and propaganda. Initially, when ISIS controlled large areas, priority was given to the reconnaissance variant, built on the use of aircraft-type UAVs capable of keeping in the air for more than an hour and operating at a distance of 100 km, flying around the territory along a given route, but then it had to be abandoned, because information obsolescence exceeded the ability of ISIL groups to respond.

Then the militants attempted to use aircraft UAV as a guided missile. It should be noted that the practice is not new and has been conducted since the times of the Second World War from the FAA-1 projectiles used by Nazi Germany for raids on Britain. However, it was not necessary to talk about the high accuracy of the FAA-1, entire cities served as a goal, not individual objects. In the newest stories Israel, in particular, succeeded in developing guided ammunition drones, adopting the Harpy drone, which allowed it to patrol in the air for up to 7 hours and operate at a distance of up to 500 km from the control point. Upon detection of the target, the Harpy, controlled by the operator with the PU, was sent to it and directly above the target, a high-explosive warhead weighing up to 32 kg was undermined. 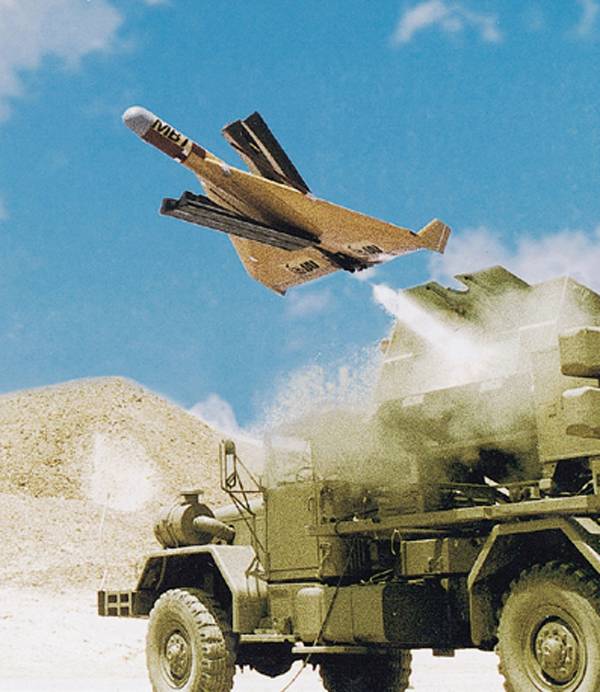 But ISIS does not have such ample opportunities to control drone drone. Therefore, manually filled with a small amount of TNT and a percussion fuse, manually purchased drones were sent to enemy positions in the range of a stable image obtained from an onboard camera, that is, at a distance not more than a kilometer, using a standard control channel like Lightbridge. It should be noted that such “strikes” made in the Syrian provinces of Homs, Idlib and Damascus turned out to be completely ineffective - the operator did not have time to orient and choose a target, not to mention precise hovering of the UAV, therefore the explosions of UAV aircraft, comparable with the explosion of F- 1, occurred, as a rule, in vain and at a distance from the battle formations of the enemy. And we can only speak about propaganda of improvised explosive devices, practiced by ISIL, from the point of view of propaganda - it looks spectacular, but totally ineffective.

The use of a helicopter-type UAV, that is, Phantom II and III class quadcopters, turned out to be much more successful. Having a GPS system even with no GPS signal (Phantom III), relatively high payload (up to 1300 grams of load), and easily maneuvering in dense urban areas up to 25 minutes, these drones turned out to be a real find for ISIL. The standard IGILovsky Phantom usually carries up to two explosive devices equipped with stabilizers, it is also used as a scout. 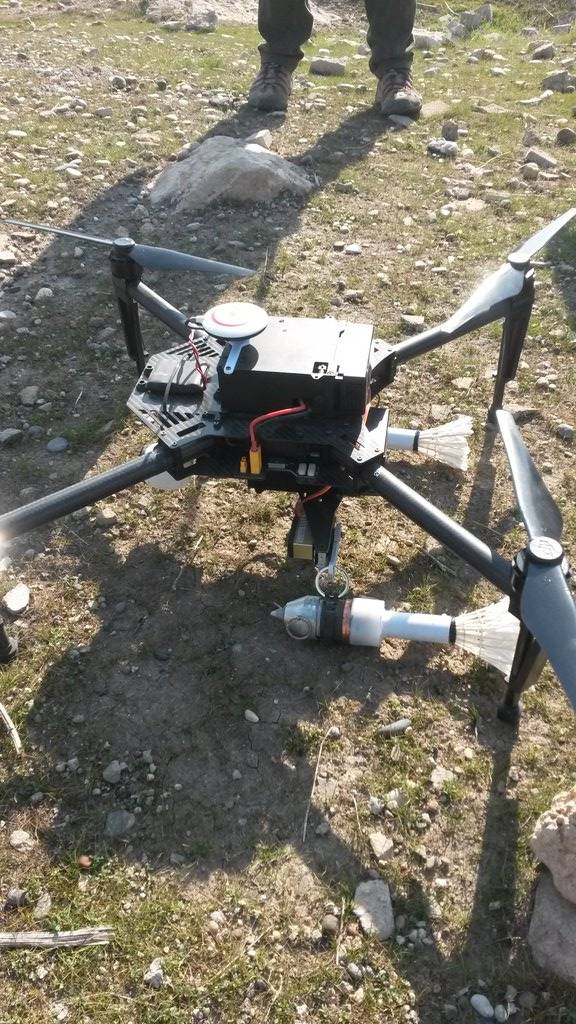 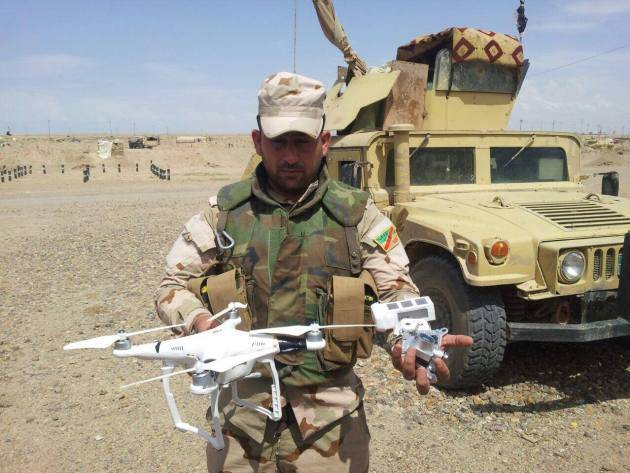 Explosive devices, as a rule, are self-made, equipped with a simple contact fuse of percussion, enclosed in a light plastic case and equipped with a small number of damaging elements so as not to exceed the load of the drone, equipped with, moreover, a high-resolution camera needed to shoot the results in the interests of propaganda . Therefore, in the overwhelming majority of cases, the discharge of such IEDs leads mainly to insignificant fragmental damage to the equipment and to light wounds and contusions of personnel who are distant to approximately 10 meters from the site of the explosion. The percentage of such handicraft "bombs" is approximately 60-70 cases out of a hundred. Nevertheless, these “bombing”, or rather, the most successful of them, are invariably present in the propaganda clips of ISIS, as evidence of high performance.

However, there are two cases in which an improvised “bomb” caused the complete destruction of a target, and both of them occurred in Mosul. The first of these occurred when a bomb hit the Aero Tec Laboratories, Inc. “soft” fuel tank last November. (New Jersey, USA) in the southern outskirts of Mosul, which caused a fire and the destruction of several units of lightly armored vehicles and tankers, and the second - at the beginning of this year, when the charge dropped from the drone hit the open roof of the Iraqi Hammer and detonated the it contains ammunition delivered to supply the Iraqi army units operating in the city. This point is presented in the video below.

However, such cases are single instances of thousands of departures, and therefore are the exception rather than the rule. However, the presence of drones in the air, capable of dropping the IED at any time, creates significant psychological inconvenience for military personnel. At the same time, it should be noted that the range of these quadcopters is rather small and amounts to about 500 meters in city conditions. This distance is due to the transmission of pictures on the phone or tablet in real time over Wi-Fi.

To maximize the range, operators, usually teenagers who are not of great value as a combat unit, are located on the roofs of buildings, where the influence of the surrounding buildings on the transfer of the image and control of the drone becomes minimal. From time to time, IED dumps from drones are coordinated with suicide attacks on cars filled with explosives, then only one “bomb” is used so as not to increase the weight of the drone with the camera and extend its time in the air.

Managing drone very simple and accessible to any student. For the massive use of UAV drones, ISIL organized so-called “media training and development schools”, in which young people are taught how to manage drones, as well as the basics of covert actions tactics near enemy battle formations. 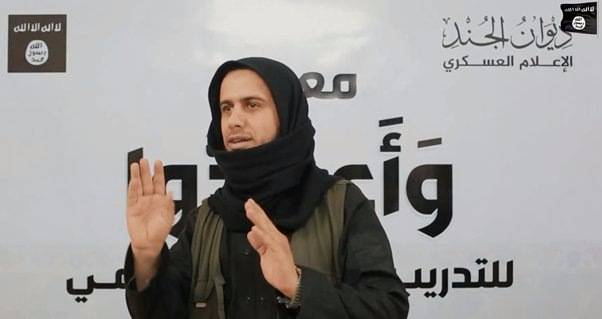 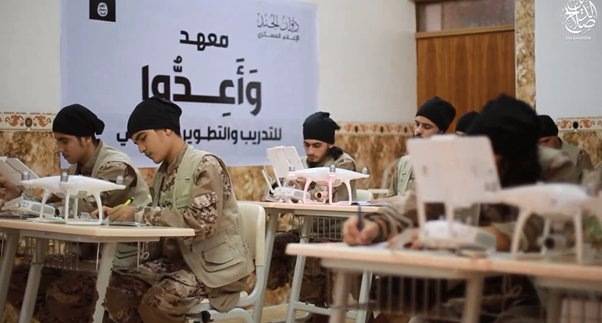 The small size and continuous improvement of commercial drone control systems make the fight against it very laborious. Initially, the Iraqi advance units by engineers de-energized the areas of Mosul in which the offensive was carried out. This, in addition to reducing the risk of inevitable fires, was considered effective in preventing the charging of dron batteries, but it soon became clear that the militants had plenty of portable electric generators and did not feel any inconvenience for charging batteries, including spare ones. Therefore, in the future, an attempt was made to block the cellular communication, through which the UAVs are controlled. But this did not bring much success for a number of reasons. 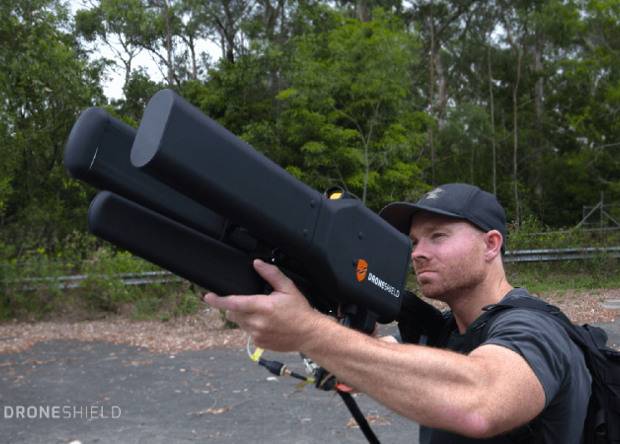 Now to fight drones- "bombers", in addition to the banal fire from small weaponsThree main methods are used. The first of these is the deliberate reduction of the bandwidth of Internet channels and the deterioration of the quality of cellular communication. The second is to create interference at the frequency of the drone control and, finally, the third is directly irradiating the UAVs with a special handheld device, which are directional helical antennas encased in a radio-transparent casing that “clogs” GPS signals, and creating powerful interference to GPS positioning devices with using powerful mobile complexes. Under these conditions, drones usually, having lost control, either make a soft landing, or return to the departure point, that is, to the operator. In a number of cases, this led to tracking down and destruction of the operator who did not have time to escape with subsequent fire. 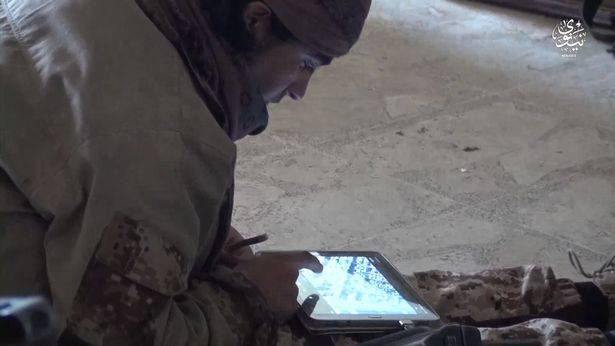 Considering the above circumstances, the majority of reputable companies engaged in the development and sale of commercial UAVs began to introduce directly into the software and hardware logic of the devices the possibility of their remote shutdown, as well as the installation of restricted areas for their use - that is, being within such a zone, the device simply does not take off . In the military environment, this issue is being developed as a remote express-flashing of enemy drones, like mobile phone software updates, during their connection to the Internet, but so far they have failed to reach agreement with manufacturers who are afraid of reducing the demand for their products due to user dissatisfaction. opportunity at any moment to lose control over their devices.

Ctrl Enter
Noticed oshЫbku Highlight text and press. Ctrl + Enter
We are
About Stalin and KhrushchevWhat you didn't want to know about England
24 comments
Information
Dear reader, to leave comments on the publication, you must to register.