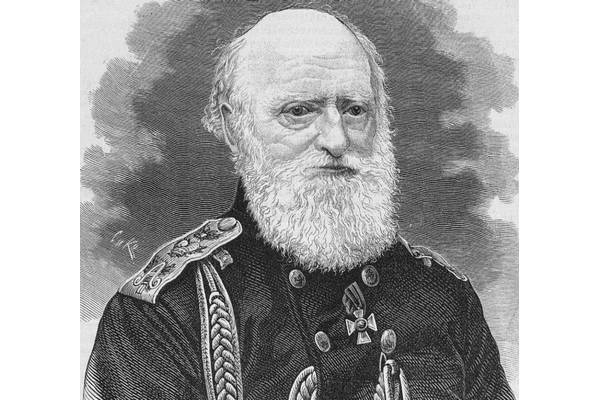 Wrangell made three round-the-world trips, explored the hard-to-reach areas of the Far North, claimed the Russian presence in America and negotiated with Mexico about the transfer of territories to Russia in California

Baron Wrangel was born into a noble family, the main principle of which was to serve the Fatherland. “I die, but I don’t give up!” - this motto is inscribed on the Wrangel family coat of arms. He determined the life course of many representatives of the famous German-Danish family, regardless of what service they performed.

One of the most famous representatives of the genus was the great navigator and scientist Ferdinand Petrovich Wrangel. He was born on December 29 1796 (January 9 1797) in the ancient Russian city of Pskov. In 10, the boy was orphaned and was sent by his relatives to the Naval Cadet Corps of St. Petersburg. Meeting with the great navigator Fyodor Kruzenshtern determined his life. Thrice Wrangel went on world travel. For the first time on the ship "Kamchatka", under the leadership of Admiral Vasily Golovnin. In the second round-the-world voyage, to the shores of Russian America, Wrangel himself headed the Meleky military transport.

Between the two round-the-world voyages, Wrangel took part in a unique scientific expedition along the northeast coast of Siberia, during which thousands of kilometers of remote territories of Russia were described. After 20 years, it was Ferdinand Wrangel who became one of the initiators of the creation of the Russian Geographical Society.

A significant part of the life of the famous explorer and explorer was associated with Russian America. From 1830 to 1835, Ferdinand Petrovich served as the main ruler of Russian America, and in 1840 he was director of a Russian-American company. As governor, Wrangel continued to do research, he personally investigated the western North American coast from the Bering Strait to California, created a magnetic meteorological observatory on Sitka Island and made a great contribution to the development of ethnography.

In the American possessions of Russia, he had to work hard on both state and church activities with the great missionary Innokenty (Benjamin). Together they built temples and schools and preached the gospel to the locals.

In 1835-1836, one of the first Russians he traveled in unfamiliar Mexico, the report of this trip formed the basis of his travel feature. It contains not only materials of a geographical or ethnographic nature, but also interesting sketches about Mexican society, about the customs and customs of Mexicans, information about the foreign policy of the country. In Mexico, as a representative of a Russian-American company, he negotiated with the Mexican government, Russia had a real opportunity to gain a foothold in this territory, the Mexican government in exchange for recognition from Russia of Mexico as a state, agreed to cede the Slavyanka valley, but Nicholas I did not go for this agreement.

In 1867, the land, the discovery and development of which was accompanied by great dangers, Russia was forced to sell to the United States. Wrangell was against this deal. However, his work, as well as the work of many other Russian pioneers, was not in vain, Russian Orthodoxy remained forever on American soil.

Ctrl Enter
Noticed a mistake Highlight text and press. Ctrl + Enter
We are
Crest on the arms"Black Baron", "White Knight" ...
7 comments
Information
Dear reader, to leave comments on the publication, you must to register.