At the head of the army and navy 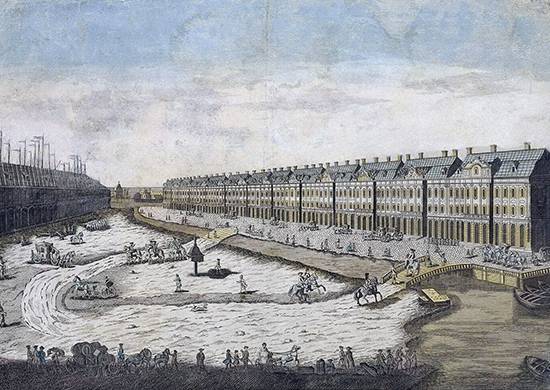 View of the building of the Twelve Colleges. Unknown artist.


Peter I, who assumed the Russian throne in 1682, at the beginning of the 18th century, began to reform the entire system of government. This also affected the central military administration. His reform was carried out under the conditions of the ongoing Northern War of 1700 – 1721 with Sweden for Russia's access to the Baltic Sea and the return of the ancient Novgorod lands on the shores of the Gulf of Finland.

Military reform took place in a constant search for the most successful form of military control at that time. For example, 18 (28) in February 1700, as a result of the conversion of the Foreign and Reiter orders, a Military Order [1] was formed, later called the Order of Military Affairs. As part of the army, the military order had its own marching organs of military administration — military tents (the tents of commissar affairs) with a staff of commissars, clerks and clerks.

The mobilization tasks that were solved by the order changed over time. If at the first stage in 1701 – 1705. he was in charge of manning the nascent regular army and forming regiments; in charge of the command of the army; was engaged in military-technical supply of the army, then already in 1705, the recruitment kits (conscription of recruits) were relegated to the Local Order. By the end of 1710, the acquisition of parts was transferred to the jurisdiction of the governors, and the supply was transferred to the field organs of the army.

In connection with the establishment of the Governing Senate [1711] in 2, the command and control system of the armed forces is changing again. The order of military affairs is abolished. The Senate began to be in charge of manning the army, and the Commissariat formed with it began to finance the troops, supply them with armament, food and clothing.

In the years 1717-1721. reform of the executive bodies was carried out [3]. As a result, the system of orders, of which there were already about a hundred at that time, with very vague functions and duplication of each other, was replaced by 12 boards. These were the predecessors of the ministries, the highest government bodies that exist today. The most important, “state”, were the colleges in charge of foreign and military (separately the army and fleet) affairs.

Thus, in Peter the Great, new supreme organs of leadership of land and naval forces appeared, which existed for almost a century. They received the names of the Military Collegium, which was in charge of military affairs, and the Admiralty Collegium, which dealt with the affairs of the military fleet.

The structure of the Military Collegium was determined by Peter's decree of 3 (14) of June 1719. [Iv] Its activities began on 1 (12) of January 1720. generalissimo). They also appointed a vice president and several members (their number was not permanent) from the highest generals, who had a wealth of experience in senior army positions and participation in wars.

The procedure for the production of cases in the Military Collegium was determined by the 1720 General Regulations. Subsequently, the General Regulations were repeatedly subjected to changes and additions set forth in the highest decrees on that.

The military college, according to the plan of Tsar Peter, was to be involved in all the military affairs of the state. In addition, she was charged with monitoring the activities of the Artillery Chancellery, which was under the authority of the General Feldtseymehmeister. The military college had three offices in Moscow: artillery, uniform and counting offices.

At the end of the reign of Peter the Great, the main structural divisions of the Military Collegium (as well as the Admiralty Collegium) began to be transferred from the capital of Moscow to the new, “northern” capital of the Russian Empire, St. Petersburg.

Soon the Military Collegium began to be divided into three independent expeditions: a) army (infantry and cavalry), b) garrison and c) artillery and fortification. The mobilization issues were to a greater degree under the jurisdiction of the garrison expedition, since the collection of the draft contingent was conducted in the gubernias. Beginning with the 20-ies of the XVIII century, the regiments received their districts and began to replenish on a territorial basis. Then recruits came at the disposal of the regimental commanders and they distributed them at their discretion.

In 1724, new changes took place in the structures of the Military Collegium and the Admiralty Collegium, which continued to be directly subordinate to the Governing Senate, which was responsible in everything for the emperor. All resolutions and statutes drafted in the collegiums were approved by the sovereign and only after that they received legal force.

The service of the general krigs commissar (he was in charge of monetary and clothing allowances for army troops) consisted of:

Infantry (infantry, army and guards),
on cavalry (army and guard),
by artillery and fortification,
logging and hiking; It consisted of a chief judge, an archivist, a translator.
The service of the general prodistymeister (a food company that was engaged in food and fodder) consisted of:

directorates in Moscow, Vyborg, Narva, Kronstadt, Revel, Baltic port and Riga.
food stores in Smolensk, Astrakhan, on the Dniester, Desna and Don rivers.
The service of the feldzeichmeister general consisted of two offices:

artillery office,
Fortification offices (military engineers).
Whatever it was, but in this form the centralization of the military leadership in Russia for the first sixteen years of its existence remained incomplete for various reasons, which could not affect the life and work of the Russian Imperial Army. This continued until 1736, when General Field Marshal B.Kh. became president of the Military Collegium. Munnich, who carried out a series of transformations [5].

The main office, in charge of manning, device, inspection and service of the ground forces, the production and dismissal of officers, landmine affairs and Cossack troops.
A special upswing [6] and the respective offices (renamed later on expeditions), dealt with the rest of the military leadership issues.

A special way up solved the questions of the admission to the military service of noble youths, the resignation of elderly soldiers and dealt with deserters.

The positive side of centralization was the unity of management and control over all the affairs of the military department. But since the Military Collegium was located in St. Petersburg, and its offices were located in Moscow, this made management difficult and deprived of its efficiency. In order to eliminate this deficiency, a military office was opened in St. Petersburg in 1736, which was connected with other authorities and thus monitored the implementation of the decrees of the Military College.

The subsequent reorganization of the Military Collegium under Empress Elizabeth Petrovna led to the fact that in 1742, it essentially broke up into departments independent of each other. Things reached the point that in 1746 – 1760. The post of president of the Military Collegium remained vacant and no measures were taken to fill this official vacancy.

In 40's major changes took place in the central military administration: the general krigs commissariat, the ammunic department, and the oberpalmeister center formed the main commissariat, which was directly subordinate to the Governing Senate.

Provisional affairs were also separated from the Military Collegium and concentrated in Provisional Chancellery. The fortification office was abolished, and its affairs were transferred to the Office of the Main Artillery and Fortification, which was an independent body subordinate to the Governing Senate.

The revival of the Military Collegium, as the highest central organ of military administration, began at the beginning of the reign of Empress Catherine II. In the 70-ies of the XVIII century. The board has undergone a number of transformations. As a result, to 1791 g. She again united all the organs of the military administration of the Russian Empire. All this was connected with the name of Field Marshal of the Most High Prince G.A. Potyomkin-Tavrichesky, who from 1784 was the president of the Military Collegium.

In 1798, the new reorganization of the Military Collegium brought it closer to the structure of the Military Ministry (Ministry of Ground Forces) of the reign of Alexander I. It gradually, in 1802 – 12, completely replaced the college. Its abolition was connected, first of all, with the name of the first military minister of Russia, General of Infantry SK. Vyazmitinov.

The highest authority of the naval administration of Russia was established by decree of Peter I of 11 (22) on December 1717. [7] The Admiralty Board began its operation on 4 (15) on April 1718. It united itself in the formation of 1715 in St. Petersburg Petersburg, the Maritime Commissariat and the Moscow Admiralty Office that had existed before in the old Russian capital. They were then united by the Military Navy Office.

The Admiralty Board had, as stated in the supreme decree, “the top management over people, buildings and other affairs, to the Admiralty subject.”

The Admiralty College consisted of the President (Chairman), the Vice President and the five or seven most experienced senior naval commanders. The president of the college was directly subordinate to the emperor and was originally a member of the Governing Senate. The first president of the Admiralty College was F.M. Apraksin, General-Admiral of the Russian fleet, member of the Governing Senate, one of Peter the Great's associates, who led the board until 1728. 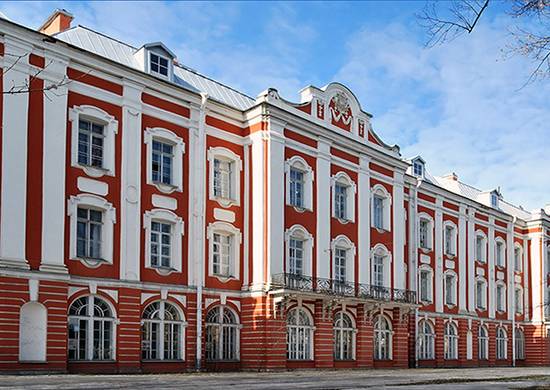 The Admiralty Board had executive and functional organs — offices, offices, boards, and expeditions. In the early years, the college did not yet have a clear functional structure, but its experience suggested the need for structural improvement.

After the reorganization of the Military Collegium, the Admiralty Collegium, which in 1726 (according to the plan of Emperor Peter the Great) died in the previous year, underwent major changes and consisted of the service of quartermaster general and six independent offices.

Moscow Admiralty,
Ober-Sarvaevskaya (shipbuilding),
Waldmeister (in charge of the timber, its harvesting and transportation)
Control,
Admiralteyskaya (in charge of shipyards and raid equipment),
Artillery.
At the very beginning of its existence, the Admiralty Board developed a number of charters and manuals that governed naval life. Among them: in 1720 - the collection of naval rules "Book of the Charter of the Marine of all that relates to good governance when he was a fleet at sea" [8]. In 1722 there is a code of maritime admiralty laws “Regulations on the management of admiralties and shipyards and on the positions of the collegium of the admiralty and other all officials under the admiralty of those under control” [9].

The highest bodies of central military administration created by Peter the Great — the Military Collegium and the Admiralty Collegium — in stories The Russian Empire played an important role. She expressed, above all, in the victories of the Russian weapons on land and at sea in many wars of the XVIII century. At the beginning of the next century, these collegiums became the basis for the creation of two ministries - the Military and the Marine.

Ctrl Enter
Noticed oshЫbku Highlight text and press. Ctrl + Enter
We are
5 March 1711 g. By decree of Peter I in Russia established the Governing Senate2 November 1721. Peter I assumed the title of Great, Father of the Fatherland, Emperor of All-Russia, and Russia became an empire
6 comments
Information
Dear reader, to leave comments on the publication, you must to register.