January 15 2018
14
In Kiev, they talk so much and for a long time about deliveries of grenade launchers from the United States that the majority or simply ignore the information, or religiously believes that the future depends on if not the whole world, then the Kiev regime - for sure.


Allegedly solved the case of the transfer of the APU 35 launchers "Jewelin" and 210 missiles to them in the amount of 47 million dollars. still hanging in the air. Moreover, at a briefing yesterday, Pentagon spokesperson Johnny Michael said that the United States did not plan to supply Kiev with not only the notorious Jevelins, but also the old Tou ATGMs developed in the 70 of the last century.

In parallel with this, a scandal flared up with the sale of the Poroshenko mode to AirTronic PSRL grenade launchers (Precision, Shoulder-fired Rocket Launcher - "High-precision rocket launcher for firing from the shoulder"). This is a replica of the Soviet RPG-7 grenade launcher, which was developed by GSKB-47 (now GNPP Bazalt) and was adopted in the distant 1961 year. Over the past 57 years, only the original 9 and more than millions of RPGs have been released. And how many tens or hundreds of millions of shots to him (a dozen types) - no one thought.

The grenade launcher was so simple, reliable and easy to use that after more than half a century a private American company decided to release a copy of it, using modern materials. The advertising booklets stated an increase in accuracy - up to 90 percent of hits at a distance of 800 meters. However, these are only statements that have not been confirmed by anything or anyone. In addition ... Kiev officials.

The fact is that the PSRL project was completed only in 2015, and a year later with a little (in the spring of 2017), the first samples of the American version of the grenade launcher were in Ukraine. What is the most "funny" - in the notorious regiment "Azov", which brought together the most outspoken Nazis from different states. To whom, precisely because of overt Nazism, the United States Congress still in 2014 forbade rendering any help. 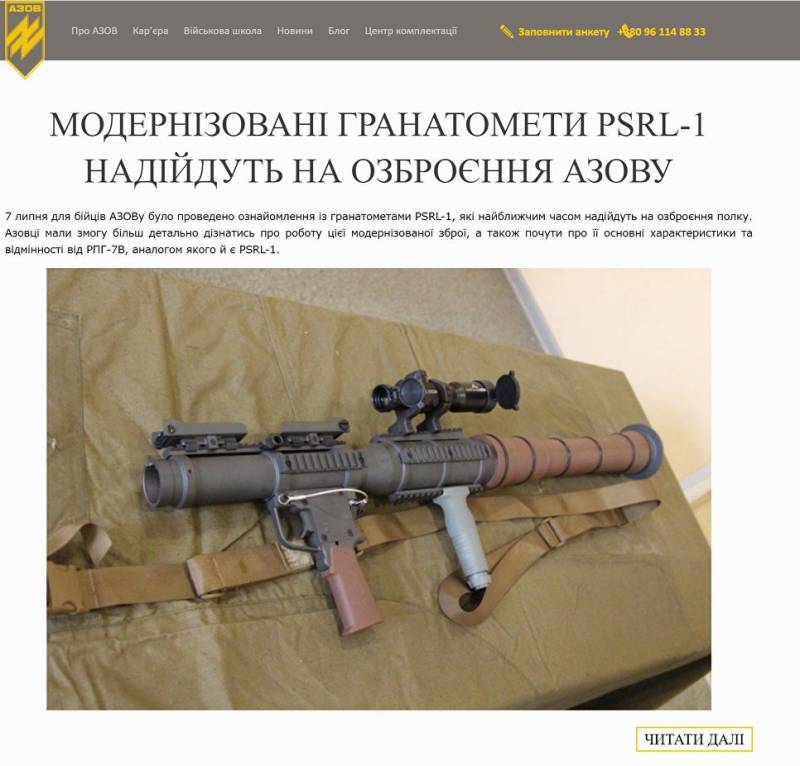 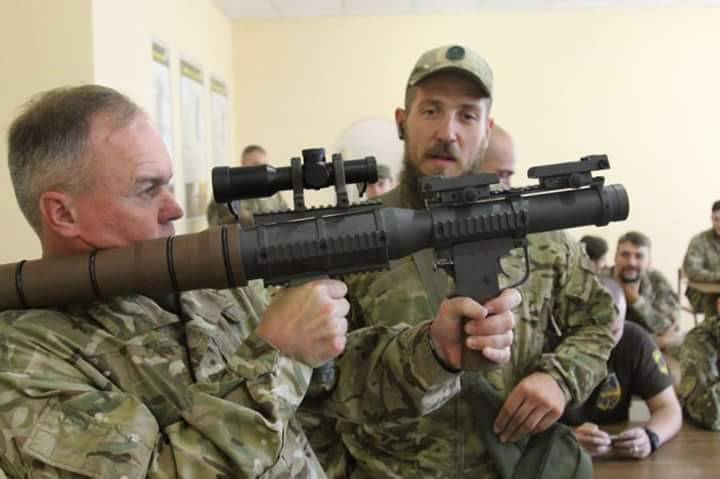 But it was in this regiment of RPG PSRL and turned out. A scandal broke out. The press service of the Azov Regiment hastily removed from its site materials about the use of Azov in July 2017 of the American PSRL-1 grenade launchers. But the matter is done - Kiev once again proved that the US Congress is not a decree. And it does not matter that the Yankees supply, train and equip the Nazis from under the floor - for the image of the United States it is important that the truth does not surface. And she surfaced and now the rest of the supply in question.

And since the level of mental development in Kiev officials like parrots, they diligently aggravate the situation with public statements. For example, the director of the Ukrainian Spetsteknoeksport Pavel Barbul in an interview with the portal Delo.ua undertook to compare the American replica with the original RPG-7. Barbul said nothing at all that he personally shot from PSRL-1 and was convinced of the undeniable advantages thereof.

See, the RPG-7 effectively shoots at 300-400 meters. American PSRL work per kilometer. Plus, 90 is a percentage of hit accuracy at the first shot ... thanks to the design, materials, and other pressure when fired. I myself on the tests of the grenade launcher from the first time hit the bench target from 800 meters. This changes the tactics of actions and significantly increases the ability of our armed forces,

- confessed the head of the state company.

Ban Barbul is not just stupid, he doesn’t even understand what his duties are. The fact is that AirTronic USA initially set itself and realized the task of producing an exact copy of the RPG-7 from modern materials. To increase strength and increase the service life of the barrel is made of steel grade 4140 / 4150. Theoretically, due to the short life, it cannot be argued that the survivability of the launcher has increased. In theory, it should. 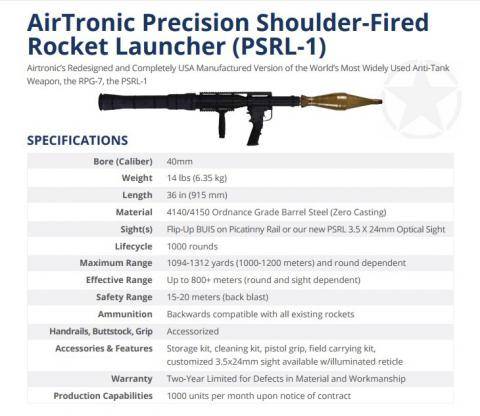 In addition, PSRL-1 is more ergonomic - it can be equipped with a butt. Two Picatinny rail allows you to fit the handle taken from the standard AR-15 under the arrow. Instead of a regular Soviet 2,7-multiple optical sight, there is an optical sight of the PSRL 3.5 X 24mm type. A slightly higher magnification allows better aiming at a long-range target. True RPG-7 is supplied with a mass of other sights, including nightly. Superior American, at least, by allowing direct aiming at night.

The main thing is that AirTronic USA does not fire grenade launcher shots. In no way. Therefore, to assert that increased firing range, armor penetration and (at times) accuracy means to lie shamelessly. From the fact that the tree in the RPG was replaced with plastic in the PSRL, the firing characteristics will not change. Moreover, for more than half a century, the RPG-7 has been improved by the manufacturer based on the practice of combat use. And the launcher clearly corresponded to the ammunition used.

In fact, as in any perfect instrument of killing, the experience of decades allows to bring the model to perfection. Therefore, AirTronic USA can not improve anything in principle. And forgive me, but a rocket fired from any RPG flies exclusively thanks to its own jet engine. Regardless of what metal and with what bodywork made launcher. The sighting range is determined not by what company launched the launch tube, but by the type of sighting device and (most importantly) the type of ammunition used.

In fact, the lie of Mr. Barbul is forced. The fact is that it was he, as the head of a state-owned company, that concluded an agreement with a private American company and paid for these pipes from the budget. I emphasize - namely launchers, not grenades, which the company does not produce. 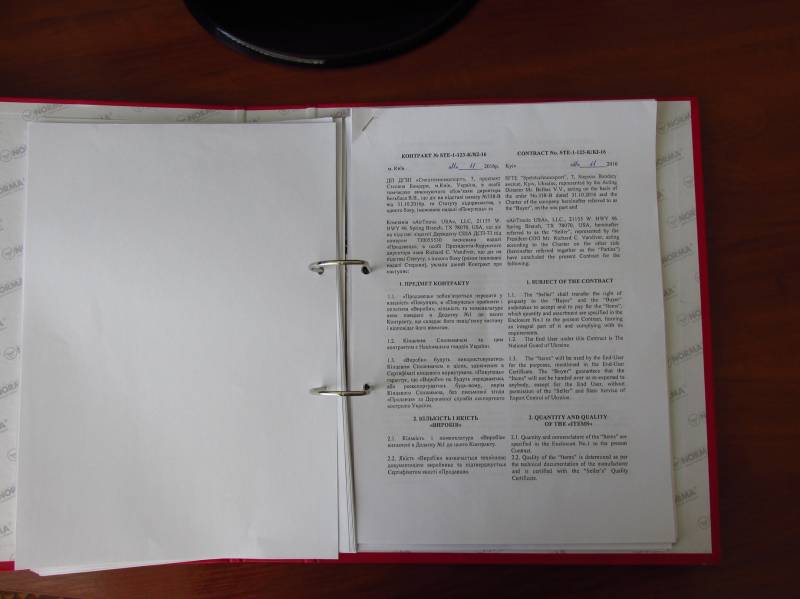 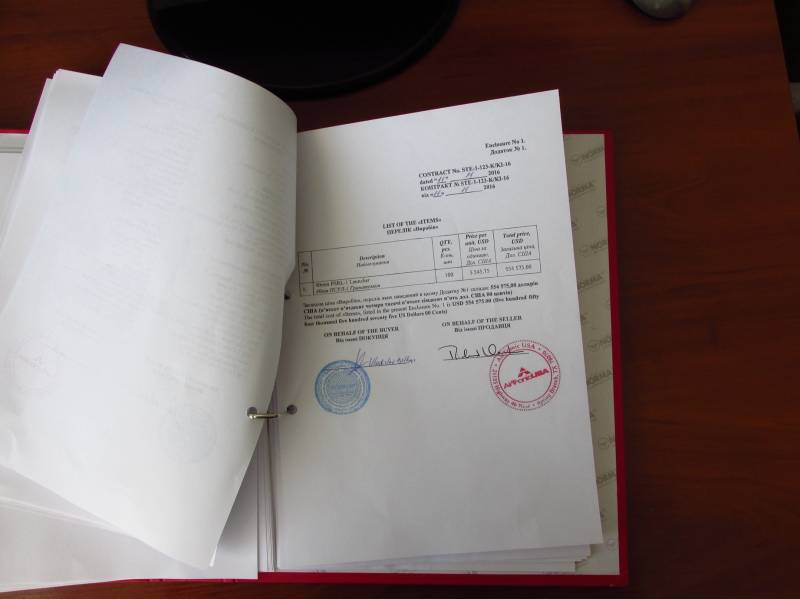 It is not difficult to calculate that one PU cost the Kiev regime in 5, 550 thousand dollars. Even at American prices, a wild price for a simple optical sight and a piece of pipe with handles. Especially when you consider that there is no shortage of launchers in the troops of the Kiev regime - there is a shortage of ammunition. About which, by the way, says in the same interview and Pan Barbul himself:

In addition to rifle calibers, some artillery calibers are also scarce. We are now closing this off with imports, but we still expect that in the near future, someone will finally start producing ammunition in Ukraine.

So the only question that remains unanswered is how many dollars did Pavel Barbul, the director of Spetsnoeksport, receive personally for this useless batch of high-quality pipes.

Ctrl Enter
Noticed oshЫbku Highlight text and press. Ctrl + Enter
We are
Situational analysis of the death of the MH17 flight (Malaysian Boeing 777), made on the basis of engineering analysis from 15.08.2014Results of the week. “In our cooperative, the board is always agreed”
14 comments
Information
Dear reader, to leave comments on the publication, you must to register.