Combat reserve: what will happen if the US is touched by Russian assets 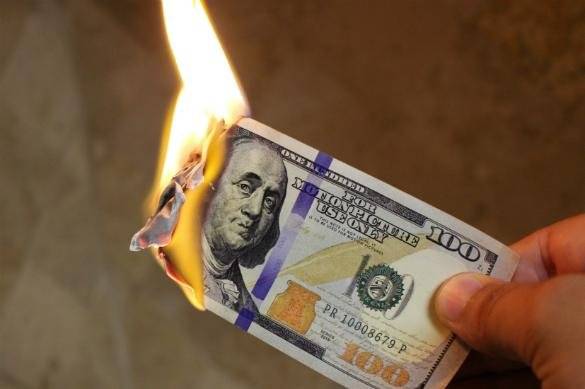 If we take into account the current relations between the two countries, the Bank of Russia’s investments in dollar assets look risky. However, if, in connection with the sanctions, Russian gold and foreign exchange assets are frozen, it will be a declaration of war. This opinion was given to Pravda.Ru by Mikhail Khazin, President of the Economic Research Foundation, economist and publicist.
- About a third of the Bank of Russia's gold and foreign exchange assets are located in the United States. Can they be frozen due to new sanctions?

- We went with Kazakhstan.

- But we still have to look at the belonging of the Central Bank ...

- And here belong to the Central Bank? What does this have to do? This is Russian money. Only very naive people believe that someone in such matters is guided by such stupidity as the rule of law.
- Why we did not anticipate this development of the situation?

- By virtue of their belonging to the liberal group.

- What then to do so that our money would not be frozen?

- This is a very complex system of maneuvers. Because if you remove these people, roughly speaking, you appoint someone meaningful instead of Nabiullina Glazyev, instead of Siluanov, this will automatically entail this very arrest. And for this reason it is very difficult for us to maneuver.

- But do you think it is possible to maneuver?

- Yes, it is possible. Moreover, the probability of this increases as the situation becomes more complex. The harder it is, the more it is swinging, the more opportunities for maneuvers.

- Experts argue that there is no point in refusing to completely invest in the United States, because this can bring down investment investment.

- The fact is that we need investmentrating for one thing only - to have foreign investments. In our economy, emphasis is placed on them. This is a mistake, because it is already clear that foreign investment is not gaining the volume necessary for the economy to function normally. For this reason, it is necessary to switch to domestic investment. In this case, the rating plays a supporting role.

In general, this system, in which we were purposefully planted, so that we would focus on foreign investment, which means that we need a rating and we must follow the rules, this is the so-called Washington Consensus system. It came up specifically for the former socialist countries.

Nobody forced us to join her, but now theoretically we should gradually get out of it. To do this, first of all, get rid of the liberal team in key positions. Because of itself voluntarily she will not do it.

- One more thing. Literally at the end of last year, the Central Bank joyfully reported on gold purchases ...

- Yes. We are constantly increasing our gold reserves.

- Stocks that are located in the United States, knowing the dangers of sanctions. This is strange…

- And in the future will actively interfere?

- Of course! In fact, the economy is a continuation of power. And accordingly, the situation is that we need to maneuver as much as possible and prepare the ground for collapse. When the financial markets collapse, at that moment you can start clearing the Augean stables. The collapse of financial markets in the West automatically gives us a lot of freedom.

- That is, you need to start dropping stock markets?

“You have to wait here.” Until the stock markets collapsed, most likely, attempts to do something dramatically in our country will lead to extremely negative consequences. In this sense, we are held on a hook.

- Are we able to bring down these markets?

- No, it is absolutely impossible. And most importantly - it is very scary. Relatively speaking, this is about the same as jumping into Niagara Falls. Maybe you will come out, and everything will be fine, but maybe not. This is the case when everyone is scared and do not want to start the first to go into a fight. For this reason, everyone is waiting.

- A collapse is inevitable?

- Absolutely. There are various legends, for example, given the elections that will be this year in the United States. There, Republicans could lose a majority, and Trump could do this collapse. Again, what does “arrange” mean? He cannot collapse the markets, especially since he does not control them. But he can slightly increase the likelihood of this collapse, and when the situation is on a thin string ...

No one knows this system enough to understand when it will collapse. And for this reason everyone is afraid. If you make a sudden movement, everyone sees this, and the collapse does not occur, then you will be smeared on the wall. Fearfully. And if suddenly the collapse happens by itself ... This is a key place - everyone wants this to happen by itself.

Ctrl Enter
Noticed oshЫbku Highlight text and press. Ctrl + Enter
We are
A great interview with Sergey Lavrov: about Ukraine, Obama and IranWhat you didn't want to know about England
100 comments
Information
Dear reader, to leave comments on the publication, you must to register.