Germany refuses to welcome US military

January 15 2018
27
German police blocked the way with a transport convoy with M109 howitzers. A convoy with American howitzers arrived in Germany from fraternal Poland. The reason for the dissatisfaction with the police of the state of Saxony was the violation by the Poles of the rules of transportation and paperwork. Not only Saxony is dissatisfied. Earlier, the prime minister of the federal state of Brandenburg publicly refused to welcome US troops on German territory. The scandal is widening. Are the Germans who from tanks and howitzers do not see any benefit, someday drive out the American military? 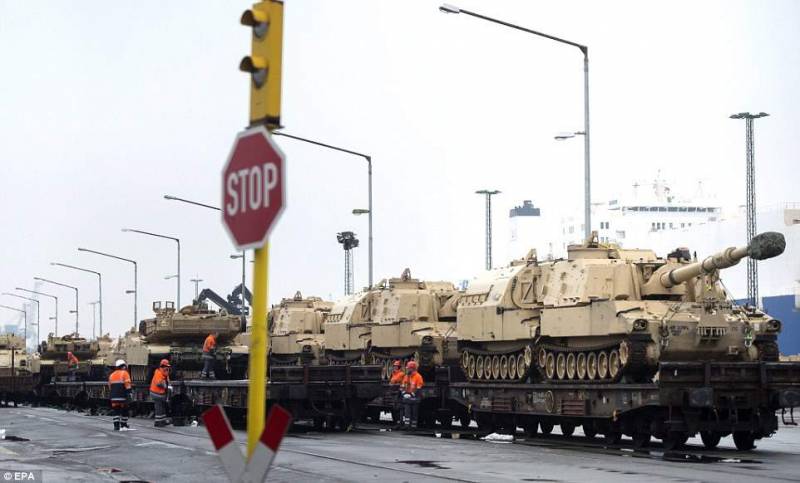 The forwarding company, which was tasked with delivering six American howitzers M109 to the destination, received an order from the US Army. However, in the federal state of Saxony, a convoy with guns was stopped on the road by police.

During the test, notes RIA News"It turned out that the forwarding company lacks even documents for transportation. And this is not to mention violations of the rules of transportation. The meticulous Germans, in addition to this, revealed that the drivers of the semitrailers did not observe the established sleep and wakefulness regime.

The transport convoy was identified for a special parking, that is, they were not allowed to go any further. Until the freight forwarders fulfill all the specified requirements for the transportation of the relevant category of cargo, the howitzers will not go further. Moreover, the forwarding company and drivers face fines.

You should not think like news It is covered exclusively in Russia solely for the purpose of “Putin's propaganda,” about which much is written in the West.

The material on how the carriers of the American howitzers M109 did not reach their destination and were stopped by the police, with great pomp and with a huge headline, was 10 of January in the subscription newspaper Bild. Curious that this material, accompanied by photographs, was available free of charge to everyone, including readers who had not paid a subscription.

“That won't do!” Said the German policeman to the carrier. And the transport of the US Army was stopped on the highway Oberlausitz - Nord.

Officials banned the passage of six Polish heavy trucks, which were supposed to deliver a total of six M109 type howitzers. Polish freight forwarding company acted on behalf of the United States. The forwarder lacked documents for the transportation of howitzers, the cargo went beyond the dimensions taken on the highway and was too heavy: the excess weight amounted to 16 tons per vehicle!

Finally, this convoy did not have the necessary escort vehicles.

The list of shortcomings was too long, and therefore officials banned the further transportation of goods. A Polish company must provide suitable vehicles for transportation and obtain the necessary transport permits. The publication confirms that the Polish transport company and truck drivers are threatened with “appropriate fines” (the amount is not specified).

Thus, we note, the German police not only explained the “visitors”, which cannot be done on the German highways, but also showed it in practice. Now the drivers are waiting in the parking lot for a fine, and the Polish forwarder is forced to look for special vehicles for transporting howitzers. That and look, howitzers will go back to the Poles.

This is not the first case of "disobedience" of the Germans to the Americans.

In the east of the country, the US military does not meet as expected. The German press writes that anti-Americanism is no longer hidden, and the highest act of its manifestation was the position of the Prime Minister of the federal state of Brandenburg, Dietmar Voydke, who publicly refused to greet the military from the United States.

This writes A. Froelich in the newspaper "Potsdamer Neueste Nachrichten".

If where the US military can count on a friendly reception, it is in Poland, and even then not everywhere. And also in Estonia. But in the German state of Brandenburg, at best, Americans can experience “skepticism”. Moreover, this skepticism is typical not only for ordinary citizens, but also for local governments.

In the spring of this year, American soldiers are again planning to move back and forth around Brandenburg. Trucks, heavy vehicles, tanks and entire trains ... This will happen more and more often due to the NATO operations in Eastern Europe. However, Prime Minister Voydke continues to "deal with it," the correspondent reports. Dietmar Widke doesn’t like this behavior of Americans.

The reason for the movements of the NATO troops is the following: Russia “occupied the Crimea in violation of international law,” Russia “leads the war in eastern Ukraine,” Russia “places troops on the western border,” because of Russia, “fear spread in Eastern Europe, especially in Poland and Baltic States. Coming "new aggression of Moscow", but because NATO has deployed 4000 military in Poland and the Baltic countries. In addition, a separate US operation called “Atlantic Resolve”, planned for NATO allies in Eastern Europe, involves the deployment of another 4000 soldier.

For defense experts, not only local but also in the Bundeswehr, it is completely clear: the two above-mentioned contingents are primarily a sign of solidarity for the allies in Eastern Europe, but no more.

Every nine months, American troops are rotated. Therefore, in the spring and summer of 2018, about 3000 American soldiers and about 1000 vehicles, as well as about 85 tanks will be moved by road and rail to Eastern Europe. This will affect Brandenburg. Ironically, this area around Berlin, once divided into two, which previously housed the Soviet Army and the National People’s Army (Nationale Volksarmee), was once filled with military and weaponsand there older people still remember military training in schools. And now the American troops want to try to get closer with these people in order to increase the "level of security of the population."

The population refers to this idea with noticeable skepticism. If American troops in Poland are welcome (for example, children are photographed with soldiers on the Humvee), then “deeply rooted anti-Americanism” is alive in East Germany.

By the way, Americans know about it. And precisely because of anti-Americanism, they want to get close to the East Germans. According to representatives of the American troops, concerts of military bands and visits to cities are expected.

The Brandenburg Prime Minister, of course, “cannot do anything about it,” the correspondent says ironically. However, he showed his personal attitude towards the situation. Voydke "reacted with irritation" to the question of whether it was time to greet the American soldiers, as is customary in such cases.

As it turned out, Herr Widke is not going to greet the American troops in Brandenburg. “I won’t wave a hand on the side of the road!” He said angrily. The Prime Minister will not climb on the tank "Abrams". Voydke believes that moving tanks back and forth will not help Germany "in the long term."

Voydke's words caused a storm of indignation. Moreover, as it turned out, he only repeated what was said a year ago. NATO partners even expressed their dissatisfaction “officially.” However, in Germany, many supported the premiere. Both the Left Party and the Alternative for Germany expressed their support for it: both movements protest against the American troops.

Herr Voydke himself believes that a dialogue with Russia is needed, and “urgently”. It will be difficult for the Federal Republic of Germany to maintain relations with Russia, but this must be done. The prime minister recalled that the unity of Germany would not have taken place without the consent of the Soviet Union, and this means that Germany has “special obligations” towards Russia that exist “to this day”.

As we see, in Germany there is still a local, but already open, "rebellion" against the American military. Today the carrier of the howitzers is stopped, tomorrow the Germans will not allow tanks anywhere.

Should German taxpayers pay for the mythical "security", for broken autobahns, and also listen to the "concerts" of Americans? The question is rhetorical. The Americans are uninvited guests. And this is especially felt in East Germany.

Observed and commented on Oleg Chuvakin
- especially for topwar.ru
Ctrl Enter
Noticed oshЫbku Highlight text and press. Ctrl + Enter
We are
Why did the German police stop a convoy with American howitzers?Nazi commando unit Brandenburg-800
27 comments
Information
Dear reader, to leave comments on the publication, you must to register.