Along Milosevic Street through Gaddafi Square ... How to respond to the American demarche?

January 15 2018
72
Along with major dirty tricks (such as, for example, supporting militants who carried out a terrorist attack on Khmeymim airbase, accusing Russia of “hacker attacks”, economic sanctions, etc.), they are trying to spoil Russia in small ways in Washington. As if we were transported during the years of the “cold war” between the USA and the USSR.


Now, the well-known liberal Boris Nemtsov, the former governor of the Nizhny Novgorod region, the former deputy prime minister in the Yeltsin government, the former active opposition figure V. Putin, has become such a symbol, such a flag, raised in spite of Russia, was connected with the cases where the head of state defended the interests of Russia).

At one time, the murder of Nemtsov on the night of February 28 2015, while walking with his mistress on the Big Moskvoretsky bridge, was almost provoked by the “Russian Maidan”. Most experts described murder as such: a conscious provocation, a sacred victim. And this name is again used in anti-Russian propaganda, which since then has not only not ceased, but is becoming more and more aggressive and dirty every day. And every year marches of his memory are held - the opponents of Russia have a great reason to try to arrange, if not Maidan, then mini-maydanchik. 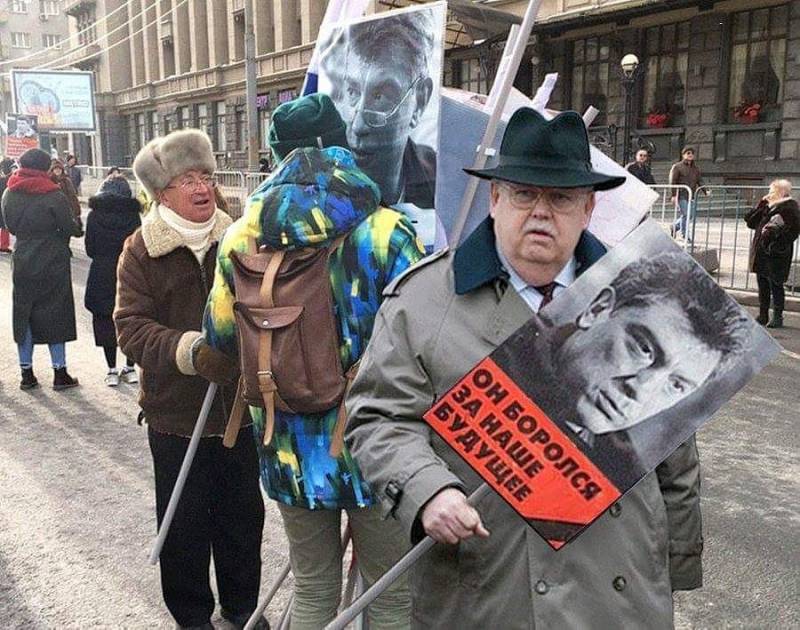 Thus, the Washington City Council unanimously decided to rename the square near the Russian Embassy in the United States, calling it the name of Boris Nemtsov. Now a sign with a new name should appear before the anniversary of the murder of the famous liberal.

And here are the motives for such a decision, voiced by members of the city council: “This is a symbolic recognition of the memory of Boris Nemtsov,” “This step symbolizes a commitment to democracy.”

By the way, not far from the Russian embassy in Washington, there is already an alley of Andrei Sakharov - there is no doubt about the motives for such attention of the American authorities to this person, and the matter is not at all in his scientific work ... Not at all.

American democracy is a special democracy that sows bloody wars all over the world. But recently, this very “democracy” was clearly manifested in the United States itself in a shameful episode. January 10 An American teacher from Louisiana dared to speak out against a low salary at a school meeting. For a woman, this ended up knocking her to the floor, handcuffing her like a dangerous criminal. Now she is charged with resisting a police officer. These are the orders in the "citadel of democracy"!

It is necessary only in Russia to detain any “oppositionist” - and not at a production meeting, but at an unauthorized action - almost all of the American and Western European media and public organizations immediately stand up for him. And they make an icon out of a killed oppositionist.

In the presidential administration of the Russian Federation, this “recognition of the memory of Nemtsov” reacted quite restrained.

“I would probably leave it without comment. I will only emphasize that this is undoubtedly the prerogative of the city authorities against the background that the state of bilateral relations between our two countries still leaves much to be desired, to put it mildly, ”said Dmitry Peskov, press secretary of the head of state.

Well, of course, the Washington authorities have the right to call a street or a square in their own country, as they like. However, since this was done right in front of the Russian embassy, ​​it can hardly be called anything other than an unfriendly step. To put it mildly.

Dmitry Novikov, Deputy Chairman of the International Affairs Committee of the State Duma of the Russian Federation, spoke more sharply about this:

“The US leadership has long been playing its part in their attempts to interfere in the internal affairs of the Russian Federation. And this fact is another example of such interference, demonstration of their likes and dislikes towards various political forces in Russia. ”

Indeed, the such a veneration of Nemtsov by Washington is interference in the affairs of Russia. Not without reason, well-known liberals have already supported this idea and started speculating on the subject of why they did not name his bridge on which he was killed, or why they do not allow him to illegally install a memorial sign on his house. Take it out and put them renaming the Bolshoy Moskvoretsky Bridge into “Nemtsov Bridge” (which even looks like a ridiculous rumor!)

Actually, why is it necessary to perpetuate the memory of Nemtsov? As if there were no more respected people in the country and in the world? In honor of many, many writers, poets, military, composers, scientists, politicians - there are no streets or squares.

But if you give an adequate response to the unfriendly attack of the United States - it is necessary to recall those who were destroyed by orders from Washington. And there is someone to remember ... For example, to name the street on which the US Embassy is located, after the name of Yugoslav President Slobodan Milosevic who was tortured in the Hague prison of Yugoslavia. The area near the embassy - the name torn apart (under the cheering of Hillary Clinton), the Libyan leader Muammar Al-Gaddafi. Some nearby lane - in the name of the barbarously executed Iraqi President Saddam Hussein (with all the sins of the deceased one cannot help but remember that no weapons Americans did not find mass destruction in Iraq). Fortunately, Hugo Chavez’s street (American intelligence agencies may also be involved in death) already exists in Moscow, although it’s located far from the US embassy, ​​so this wasn’t such a demonstrative step as what Washington wants to do now. .

In the end, we here, in Russia, also have the right to honor the memory of those whose work we have with the US authorities disagree. This right is the same as the right of Washington to perpetuate the names of anyone for the sake of the triumph of American democracy.

We can recall many, many more who were killed in order that this “democracy” would triumph somewhere. Both politicians killed earlier and ordinary soldiers, officers, as well as civilians killed by American bombs or killed by terrorist organizations created with the participation of the United States ... But there are not enough streets, lanes and squares. even in such a huge country like Russia ...

In the photo - former US Ambassador John Tefft on the march in memory of Nemtsov. The inscription on the portrait speaks for itself.

Ctrl Enter
Noticed oshЫbku Highlight text and press. Ctrl + Enter
We are
Results of the week. “Look, the whole face is black! Have you ever read Moidodyr? ”Nemtsov asked for forgiveness from hamsters
72 comments
Information
Dear reader, to leave comments on the publication, you must to register.