January 15 2018
96
With this material we open a series of articles devoted to the scientific, technical and social predictions of various well-known and little-known authors of science fiction works. We all strive to find out “what is there in the future ...” We constantly want to know what was, and what will be, mistakes and opportunities, risks and prospects. And perhaps the answer to the eternal question "Why?". Help us in this science fiction writers, who have all the possibilities for this. Someone uses them better, someone - worse. So, today we will get acquainted with the little-known novel “Red Star”. Surprisingly, but published in 1908 year, it has not lost its relevance today ... 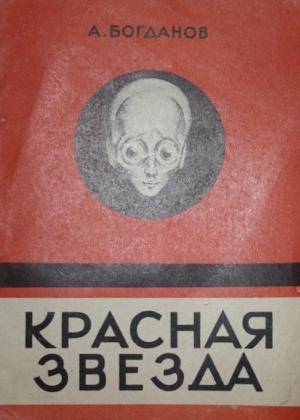 Let's start with the biography of the author. And he was Alexander Alexandrovich Bogdanov (real name - Malinovsky, pseudonyms - Werner, Maximov, Private). He was born in 1873 in the Grodno province and as a result became a doctor, economist, philosopher and politician. In 1896 — 1909 was a member of the Bolshevik Party, with an 1905 member of the Central Committee. The head of the inner party group "Forward". It was he who created the famous party schools of the RSDLP in Bologna and on the island of Capri. He argued with V.I. Lenin, but then in 1911, and at all decided to move away from politics and devote himself to science. Since 1918, he was the ideologue of Proletkult and advocated the creation of a new proletarian culture. In 1912, he wrote the work “General Organizational Science. Tectology ”, in which they were offered a new science about the existence of universal types and the natural possibilities of structural transformations in any, including social ones. Obviously, there were synergy and some provisions of cybernetics. In 1926, Bogdanov organized the first blood transfusion institute in the world, became its director and died during a blood transfusion experiment, which he set for himself.

The novel was written in 1908 year, but still has not lost its relevance. Many more serious works of his contemporaries lost it, but his novel, for all its some naivete, is not. But why, we'll figure it out now.

The content of the novel is as follows. His main character Leonid meets on earth aliens from another planet - the Martians, and they take him to Mars with them. He makes a flight in outer space on the ship éteronefe, driven by the decay of "radiant matter", that is, in fact, it is an atom plane. And this is only one of his predictions - the cosmic nuclear engine, because in the novel there are a lot of technical predictions. Bogdanov predicted 3D cinema, electronic computers and voice recorders, artificial protein and synthetic fibers. Production on Mars at Bogdanov is also managed by machines that accurately track the need for some kind of labor and keep records of the output and the time spent on it. It is believed, by the way, that video chat was first predicted by Hugo Gernsbek in the novel “Ralph 124С 41 +”, but it was first printed in 1911, that is, three years after the appearance of the novel Bogdanov. And in the same way, before the discovery of Einstein, it discusses the prospects for the use of nuclear energy. He foresaw the appearance of the atomic weapons, about the application of which he wrote the following: “with such a weapon, the one who warns the enemy for a few minutes with his attack, he inevitably destroys him”. Very perspicacious, isn't it?

However, the main thing in the novel "Red Star" is still not a technique, but a social structure of the Martian society. In general, he meets real communism there in the form in which Russian revolutionaries imagined him - a highly organized society of highly conscious and responsible citizens.

Labor on Mars is the need of all Martians. He brings them joy, and the length of the working day is about two hours, so most of the time they devote to leisure and self-improvement. And they change jobs all the time in order to know all its diversity. Where and how to whom to work, only recommendations are given, but they are not mandatory, since any violence in Martian society is excluded. The only thing where it is allowed is ... raising children, in those cases when they have atavistic negative instincts (that is, they can be slapped!), And also in relation to the mentally ill. At the same time, the younger generation, as well as in the novels of the Strugatsky brothers about the future “World of Noon,” is brought up not in families, but in “children's homes”, where they are both educated and brought up.

To draw a picture of a foreign world and a foreign culture is very difficult, Tommaso Campanella tried to do it in his “City of the Sun”, and Polish science fiction Jerzy Julawski in his novel-trilogy “The Winner”, published, by the way, in the same 1908 year. Bogdanov, apparently, therefore decided to somewhat simplify his task. On Mars, there is no division of people according to skin color, there is no nation, culture is one and common for all, as is one language. That's why история Martian society, he says through the mouths of his Martian heroes, is “more direct” to the history of earthlings, who have a lot of not only social, but also cultural and ethnic contradictions, which are very, very surprising to Martians who have been to Earth.

But then the most interesting begins, and here the social aspects of Bogdanov’s foresight rise to a new height. For all the trouble-free nature of Martian society, the Martians still have one problem, and they have the same problem that today faces us - uncontrolled reproduction. High moral principles do not allow the Martians to restrict fertility. But they also do not want to limit the level of consumption, while the reserves of “radiating matter” on Mars are small and sooner or later they will have to run out. True, they could have been brought in from the Earth, but the learned Martian Starny believes that humans simply won't share them with them, that the Martians on Earth are threatened with attack and destruction. Venus remains, where minerals needed by the Martians abound, but there it is very dangerous and difficult to extract them.

Therefore, Starni offers to choose the least of two evils: to destroy the population of the Earth, as it has not attained a high level of development, in favor of the already existing and mature Martian communism. Leonid's friends - engineer Manny and Martian Natty, who fell in love with a revolutionary Earthman, oppose this plan, and others do not support him, since, they say, every form of life, and even less thinking, is sacred. However, it is impossible not to notice that the decision with the colonization of Venus is also not a very good way out, because it will lead to huge casualties among the Martians, and whether the revolution will succeed on Earth and what the outcome will be is unknown.

And then Bogdanov possessed an astoundingly astounding foresight and foresight, which should probably be placed in a prominent place in front of the eyes of many politicians of a “communist orientation”: “not one is foreseen, but many social revolutions, in different countries, at different times, and even in many ways, probably of unequal character, and most importantly - with a dubious and unstable outcome. The ruling classes, relying on the army and high-tech military equipment, in some cases can inflict a destructive defeat on the rebellious proletariat, which in whole vast states will throw back the struggle for socialism for dozens of years; and examples of this kind have already been in the annals of the earth. Then the separate advanced countries in which socialism will triumph, will be like islands among the capitalist hostile to them, and part of even the pre-capitalist world. Struggling for their own domination, the higher classes of non-socialist countries will direct all their efforts to destroy these islands, will constantly organize military attacks against them and will find enough allies among the socialist nations ready for any government from among the former owners, large and small. The result of these collisions is difficult to predict. But even where socialism holds out and emerges victorious, its character will be deeply and permanently distorted by many years of the state of siege, the necessary terror and militarism, with the inevitable consequence of barbaric patriotism. ”

You can even argue, although it is, of course, not indisputable that it was for this passage that the whole novel was written. Well - examples of such an approach are known, for example, the whole novel by A.N. Tolstoy "Aelita" was written for the sake of the chapter "The Second Story of Aelita", in which he spoke about his own views on the history of mankind.

Leonid is horrified by what he heard, and Sternus kills himself in a state of soul disorder, after which the Martians bring him back to Earth. However, he does not stay there either, since it turns out that the Martian Natty takes him, wounded in revolutionary battles, again to Mars, while on Earth the proletarian revolution is victorious.

It is interesting that V.I. Lenin read this novel. And, apparently, the first part - "Red Star" and its continuation - "Engineer Manny", written by him in the 1913 year. And in one of the letters to Gorky in 1913, he wrote about him the following: “I read him to” Engineer Manny “. The same Machism is idealism, hidden in such a way that neither the workers nor the editors in Pravda understood. ” Yet “Engineer Manny,” although inferior to the “Red Star” in both ideological and artistic terms, is of considerable interest, as an original attempt to portray a transitional era to socialism. And compared with such works as Bellamy’s novel, which was widespread in our country during the years of the first revolution, or the utopian stories of Wells, the novels of Bogdanov, a man of great culture and mind and heart, a fiery idealist, in the best sense of the word, throughout his life - are excellent reading material. ”

However, V.I. Lenin wrote all this, still not knowing about the events of 1917 of the year, or about 1937 and 1945, and certainly could not foresee the year of 1991! In the meantime, everything turned out as a result “according to Bogdanov”, including the xenophobia that was widespread in our society and many other negative consequences of attempts at a radical reorganization of society, not to mention the problem of resource shortages facing earth civilization. It is necessary to replace the word “radiant matter” with the word “oil”, and it’s as if we are in our time, is it not?

Ctrl Enter
Noticed oshЫbku Highlight text and press. Ctrl + Enter
We are
Chernobyl notebook. Part of 3Father told
96 comments
Information
Dear reader, to leave comments on the publication, you must to register.