Is the handle of the Syrian suitcase strong? About the preparation for the Congress in Sochi

January 12 2018
13
29-30 January in Sochi, the Congress will host the Syrian national dialogue. The main goals that the organizers of the actual congress of the Syrian national and religious movements set themselves are to find a compromise for the ATS to go from a protracted military conflict to the political process - while maintaining territorial integrity, democratic (without any sarcasm) elections, the creation of a constitution, reflecting the interests of each of the ethnic and religious groups living in Syria.


In general, the goals are good, but for all their goodness, it is hardly necessary to assume that the Sochi Congress on Syria will pass without friction. Syria has too many “friends” (from the so-called Geneva format) ... And even more “friends” from Russia. And the plans of these “friends” clearly do not include any positive results of the Syrian meeting in Sochi, if only for the reason that any positive things there could be more proof of Russia's successful foreign policy in the Middle East.

Means, will spoil? As the saying goes, a no brainer that they will ... And not only militarily. In the information too. We already saw the military information plan from "friends" in the photo of the results of the attack at the Russian airbase in Khmeimim - attacks with the help of handicap-looking drones with a very advanced e-filling. The very fact of this attack became literally a balm for the soul for those who continue to make statements from the series: “Putin said that the terrorist ridge in Syria has been broken. So where is this breaking of the terrorists' ridge? ”

But in fact, you need to be very naive to find that the Russian authorities seriously consider the Syrian deal done and expect 100% breakthrough in Sochi for January 29-30 in January under the prevailing conditions. Because the beginning of the Congress carefully prepared. And prepare with an understanding of the specifics of the situation. And the specificity in the unfading principle, according to which a kind word and a pistol make it possible to achieve more than just a kind word. If only diplomacy is used and only the Ministry of Foreign Affairs tries to help official Damascus to have representatives of all ethnic groups, confessions, clans and groups sitting at the round table of negotiations, then write to them. The specificity is such that without a force factor, they do not intend to perceive any diplomacy in the Middle East. They cannot, do not know how, and they will not allow them to be perceived, even if the “intra Syrian” parties themselves strongly want it.

So which gun is loaded before the Sochi meeting? In fact, here it would be necessary to use the term not “charged”, but “discharged”, and it is discharged in those who decided to arrange a kind of terrorist enclave in Idlib, as well as sites for “self-development” in the province of Damascus, plus at the borders of Israel and Jordan ... Those same de-escalation zones, in which de-escalation at least somehow showed itself, until Russia announced a victory over ISIS (* prohibited in the Russian Federation) and the withdrawal of a significant part of the contingent from the SAR. As soon as these "theses" were proclaimed, the bearded boys, excuse me, flooded out of all the cracks. They took the position of the Syrian troops in the south into the ring, carried out a series of attacks on the territories controlled by the SAA in Latakia, fired historical center of Damascus, launched a swarm of shock drones from Idlib at the base of the Russian Aerospace Forces "Khmeimim" (also Latakia), intensified in the south of Aleppo province, carried out a series of attacks in Hama. The list goes on.

With such a "baggage" to sit at the negotiating table on a political settlement worthless. But the sponsors of the bearded boys will do everything to ensure that the situation on the Syrian fronts remains under considerable tension until 29 January.

In this situation, the only way out is to inflict militants on clusters, which in the morning are moderate opposition in white helmets, and in the evening “al-Nusra” (*) and other “al-Qaeda” (*), preventive strikes so that ”(That part of her that decides to survive) by itself there was a desire to speak and negotiate. And these blows are applied. The Syrian army squeezes out everything that can be squeezed out and moving daily under the friendly howl of terrorists and their fans about what, they say, is impossible here, “peaceful people, peace zone, and peace in general”.

The Abu Dukhur airbase, which since 2015 has been controlled by the “moderates” from the Dzhebhat al-Nusra (*) group, has been taken under control. Compresses the vise in the south of the province of Aleppo. Both of these successes make it possible, if I may say so, to correct the Turkish traffic in Idlib and reach negotiations, having additional trumps in front of Turkey as well. 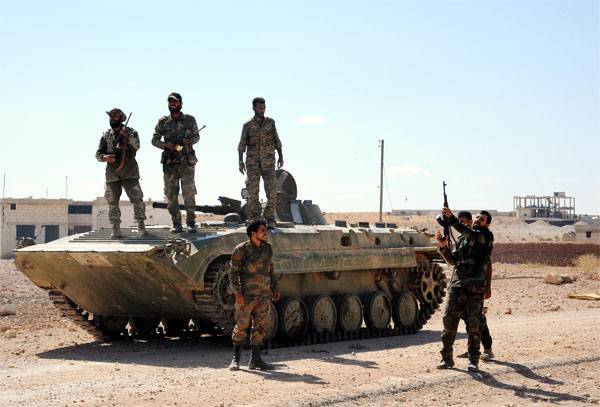 Syrian government troops issued an ultimatum to the militants in Harast, Jobar, Ain-Tarme with the requirement to lay down weapon. By the way, these territories, as well as the main part of Idlib, are controlled by the very forces that had previously declared their categorical unwillingness to go to negotiations with the “Assad regime” in Sochi. If we take into account that ultimately the CAA ultimately with the help of the Russian Federation intends to implement, not in words but in deeds, then the categorical reluctance of the mentioned “gentlemen” can be replaced by a burning desire to talk in Sochi about the peace process.

However, taking into account all the nuances of the current period, it comes to mind that even if the clip for “bearded boys” is defused seriously, then there may be a variant of what happened, for example, in Georgia in 2008. The thing is that the whole operation can stop at that very moment when only one step remains before its confident and successful completion - the same option to stop “for fifty kilometers to Tbilisi” ... Although, as in that song, “we don’t it is given to you to understand ”... what are the ultimate goals of Russian participation. In the end, the East is a delicate matter. The main thing is that this thin does not break again. And so that the Syrian question does not become for Russia a suitcase without a handle.

Ctrl Enter
Noticed oshЫbku Highlight text and press. Ctrl + Enter
We are
Results of the week. “In our cooperative, the board is always agreed”Syria: Americans scare themselves, and Asma Asad buys chairs
13 comments
Information
Dear reader, to leave comments on the publication, you must to register.