January 11 2018
26
The shipbuilders of the Northern Shipyard supplied power to the Main Switchboard of the Corvette “Thundering” project of the 20385 project. Receiving power to the “Gremyashchy” allows you to start its mooring tests and presenting general ship systems to the customer’s representatives, the press service of PJSC Shipbuilding Plant “Severnaya Verf” reported to the Military Review.


In the next five months, shipbuilders will have to close their mooring certificates around 200. 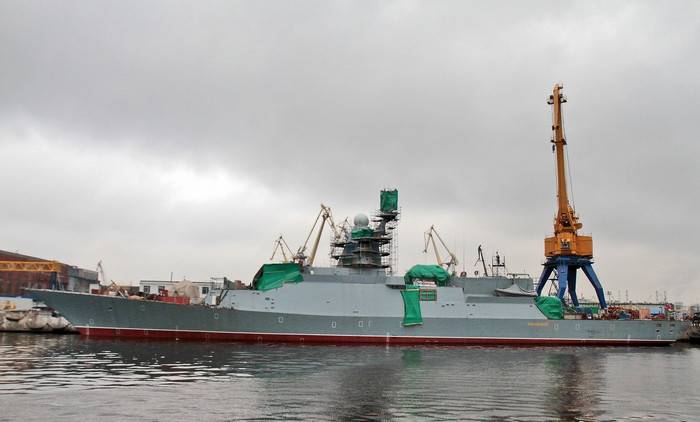 On the corvette, the installation of weapons systems, general ship hydraulics, domestic wastewater, and air conditioning is completed. Finishing arrangement galley. Shipbuilders have begun installation of a control system for technical equipment, which is responsible for the automatic control of the Main Power Plant and general ship systems. On the sea trials, “Thunderer” should leave in June 2018 of the year.
- Noted the press service.

The 20385 project is a modernized project of a new generation of corvette, developed by the Almaz Central Design Bureau. The main task is the detection and destruction of surface enemy ships or submarines, the organization of the landing of troops, the protection of the coastal zone, the escort of other ships. The project provides for artillery, rocket, anti-submarine, hydro-acoustic and radar systems, a hangar for the Ka-27 helicopter. Thanks to the original architecture and the use of composite materials in combination with special coatings, as well as the missile armament and antenna posts at the corvettes built into the hull, the radar, acoustic and optical visibility is significantly reduced.

Ctrl Enter
Noticed oshЫbku Highlight text and press. Ctrl + Enter
We are
Technical readiness of the “Thundering” corvette has reached 65%Severnaya Verf Shipyard will launch the third serial corvette of the 20380 Stable project in May
26 comments
Information
Dear reader, to leave comments on the publication, you must to register.