On Sevmash talked about the modernization of the cruiser "Admiral Nakhimov"

January 11 2018
53
From the North heavy nuclear missile cruiser fleet "Admiral Nakhimov", standing on the stocks in Severodvinsk, removed all the old equipment and begins installing new ones, said the general director of Sevmash Mikhail Budnichenko to the factory magazine.

The ship has unloaded all the equipment. Part of it was sent for repair to manufacturers. Contracts for the supply of new equipment and complexes. Works are carried out in accordance with the schedule approved by the Ministry of Defense of Russia
- he said. 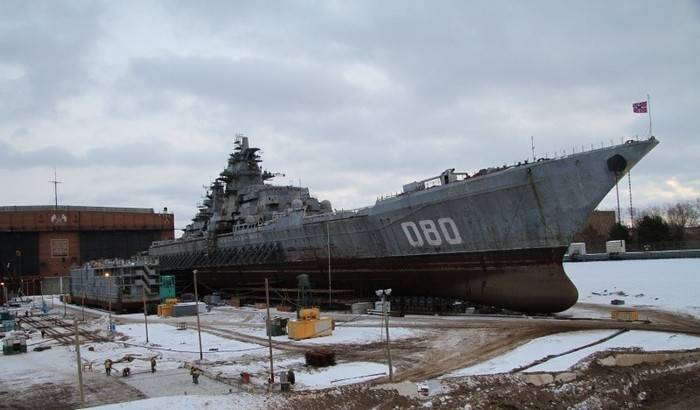 Deep modernization of the cruiser should be completed before 2021 year. TARK, in particular, will receive the Kaliber cruise missiles, the Poliment-Redut air defense missile system, and its anti-aircraft ammunition will be increased several times. This was announced last spring by the head of the USC, Alexei Rakhmanov.

In addition, life support systems and ship energy will be replaced on the ship, a new multi-function on-board computer will be installed.

It is safe to say that after the upgrade, the Admiral Nakhimov will become not one of the most powerful ships, but simply the most powerful ship. And not the Northern Fleet, but the entire Russian Navy
- said the deputy director of the Center for Analysis of Strategies and Technologies Konstantin Makienko.

“Admiral Nakhimov” was launched in 1986 year. In 1999, it was put on scheduled maintenance, a deep modernization of the cruiser began in 2013, reports TC "Zvezda"

Ctrl Enter
Noticed oshЫbku Highlight text and press. Ctrl + Enter
We are
The “Redut” and “Polyment-Redut” systems: the troubled future of the fleetModernization of 1144 cruisers. Unanswered Questions
53 comments
Information
Dear reader, to leave comments on the publication, you must to register.