Pakistan vs USA: Washington does not want to sponsor Islamabad

January 15 2018
8
The unprecedented decision was made recently by the leadership of Pakistan. Islamabad, once considered the most important military-political ally of the United States in South Asia and the Middle East, decided to cease military-technical cooperation with Washington. Of course, Islamabad itself would never take such a demonstrative step, do not create the United States prerequisites for the deterioration of bilateral relations. 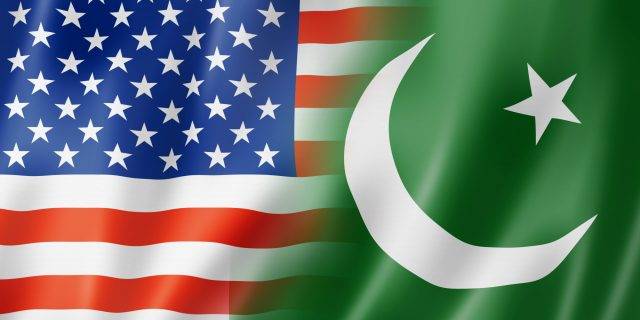 The Pakistani demarche was a response to the decision of Donald Trump to freeze the program of military-technical assistance to Pakistan. The new American president accused the leadership of this Asian country of supporting terrorism and non-fulfillment of allied obligations, and said that from January 1 on January 2018, American financial assistance to Pakistan was suspended. However, the yard is no longer 1960-s. The American accusations in Islamabad responded with dignity, showing that the nuclear power with a population of many millions no longer intends to bow to the “Uncle Sam”, apologizing guiltily.

Pakistani Defense Minister Khurram Dastgir Khan, speaking at the Institute for Strategic Studies in Islamabad, officially announced that Pakistan had suspended cooperation with the United States through the Department of Defense and intelligence agencies. In fact, this means that the country, which has been the main strategic partner of the United States in the region for decades, refuses to continue its alliance with Washington. Moreover, the Pakistan Foreign Ministry explained the American accusations to the country that the US and NATO campaign in Afghanistan failed, therefore Washington is looking for a candidate for the scapegoat, and Pakistan in this case appears to be a very convenient country for American politicians and generals .

The “black band” in relations between the United States and Pakistan has been laid for a long time. The long-term “friendship” of the two states was based, first and foremost, on confronting the socialist camp during the Cold War. At that time, the Soviet Union provided support to India, the main enemy of Pakistan, and besides it actively manifested itself in neighboring Afghanistan, which could not but alarm the Pakistani elite.

It was Pakistan that was a key element in helping the Afghan Mujahideen, who fought against the Soviet troops and the DRA army. After the end of the Cold War, the situation began to change gradually. Pakistan is increasingly trying to pursue an independent policy, guided by its political and economic interests. Although in the 2001 year, after the September 11 attack, Pakistan provided full support to the American operation in Afghanistan, it was already clear that Islamabad had its own goals and was not going to completely destroy religious-fundamentalist groups in Afghanistan and on its territory (in North Western border province). The United States accuses the Pakistani government of not only not fighting terrorists, but also giving them the opportunity to create bases without hindrance on Pakistani territory. 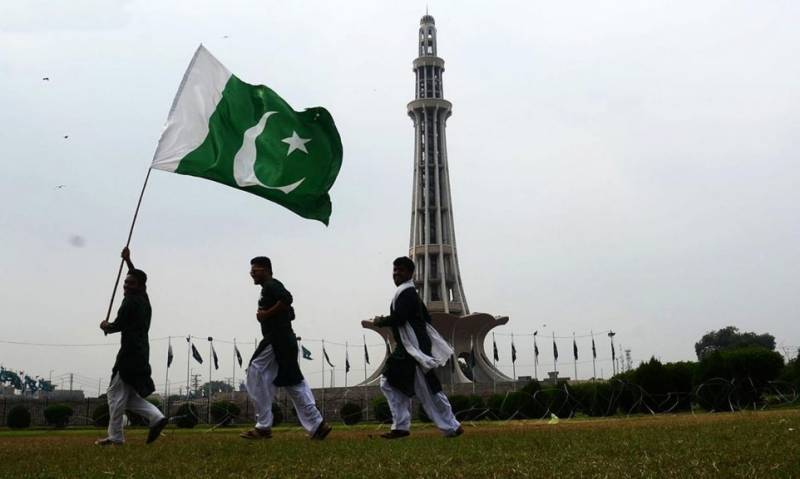 For Pakistan, as is known, the activities of these groups represent a certain benefit. First, with their help, Pakistan is destabilizing the situation in the disputed Indian state of Jammu and Kashmir, where a large Muslim community lives. Secondly, the very existence of controlled radical groups allows Pakistan to use them as a tool for asserting its influence in the region, for various political and military manipulations. Finally, we should not forget that Pakistan is an Islamic republic in which religious values ​​have always played a very large role. It is Islam that is the basis of Pakistani political identity and, strictly speaking, unites the ethnically diverse Punjabi, Pashtun, and Baluch population of the country into a single community.

In Pakistan’s society itself, if not to speak of the political, military or economic elite, the attitude towards the United States is, to put it mildly, very cool. Pakistani Muslims have always been very sensitive to the slightest signs of United States Islamophobia. As soon as the United States undertook acts of aggression against Muslim states, powerful performances immediately began in the cities of Pakistan with the burning of American flags and portraits of American presidents - and most of the ordinary Pakistanis supported these performances. This is a paradoxical situation - the majority of the US population hates, but the elite have been cooperating with Washington for many decades.

The United States has long made serious financial injections into the Pakistani military sphere, hoping that Islamabad will remain a reliable conductor of American influence in the Middle East. But it turned out that the further, the more the Pakistani leadership is focused on carrying out an independent policy. Ultimately, the US Department of Defense and the US State Department thought about the desirability of further funding Pakistan anti-terrorist operations. Although Pakistan’s leaders themselves claim that the country is at the forefront of the fight against terrorism, Washington no longer believes the statements of high-ranking Pakistani officials. Recently, the United States froze the provision of 900 million dollars to Pakistan for military purposes. Incidentally, this is a very large amount for the country - we recall that the annual military budget of Pakistan is about 8 billion dollars, so the United States decided not to provide Pakistan with more than 1 / 10 parts of its annual military budget.

The deterioration of relations with the United States is caused, among other things, by the peculiarities of the modern foreign policy of Pakistan. To begin with, Pakistan has long sought to demonstrate complete independence from the American course in foreign policy. Back in the years of the Cold War, Pakistan had good relations with neighboring Iran. They were strengthened, among other things, by the presence of common problems and economic interests. Thus, Pakistan, like Iran, is fighting the Baloch separatism, is interested in laying a gas pipeline through its territory. Although the United States treats Iran as an enemy, accusing it of supporting terrorism, authoritarianism of the internal regime and all other "deadly sins", Pakistan does not share this attitude of overseas partners. Moreover, in Islamabad, friendliness towards Tehran has always been emphasized. Naturally, such an approach cannot appeal to Washington. 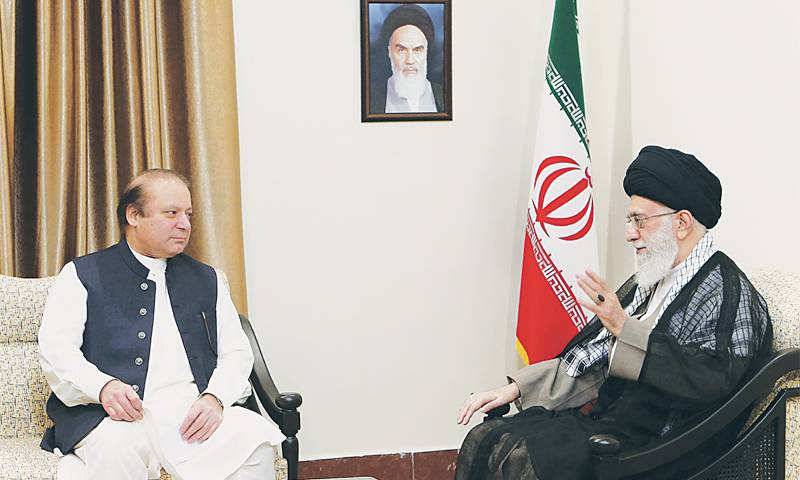 But even more annoying to the United States is the further development of Pakistan-China relations. China, like Iran, became a close partner of Pakistan during the Cold War. The rapprochement of the two states took place on the basis of the existence of a common strategic adversary - India, and also against the backdrop of the confrontation of both Pakistan and China with Soviet influence in Central and South Asia. Despite the fact that China has its own serious internal problem - the separatist movement of Uyghur Muslims in the Xinjiang Uygur Autonomous Region, Pakistan almost never criticized the policy of the Chinese leadership towards the Muslim minority. Moreover, Islamabad demonstrated the full support of the PRC in questions about the ownership of Tibet, Taiwan and Xinjiang. In response, the grateful Chinese support Pakistan on the Kashmir issue.

Now bilateral relations with China have strengthened due to joint economic interests. Pakistan has an important role to play in the implementation of the Chinese project to revive the Great Silk Road. Through the Pakistani territory should pass a gas pipeline from Iran, which will deliver fuel to China and Southeast Asia. Beijing is also interested in other large-scale investments in the Pakistani economy, for example, in the creation and development of a deep-water port in Gwadar. Incidentally, there are not only economic, but also military-strategic interests of China - in the US rightly fear that, following the use of the Gvadar port for economic purposes, Chinese warships and submarines may appear in Gwadar, which will allow China to designate its military political presence in the Indian Ocean.

For modern Pakistan, relations with China have long become more important than relations with the United States. Now China is the main economic partner of the country, and it is not only about importing Chinese consumer goods to Pakistan. China plays a key role in the development of the Pakistani nuclear program. At a time when the United States and other Western countries were trying to build a system of obstacles for Pakistan in the development of nuclear infrastructure, China provided comprehensive assistance to Pakistan. For example. China has provided the country with the necessary to create weapons equipment, helped build a nuclear reactor in Khushab. Beijing's assistance is also invaluable in the development of Pakistan’s civilian nuclear power industry. 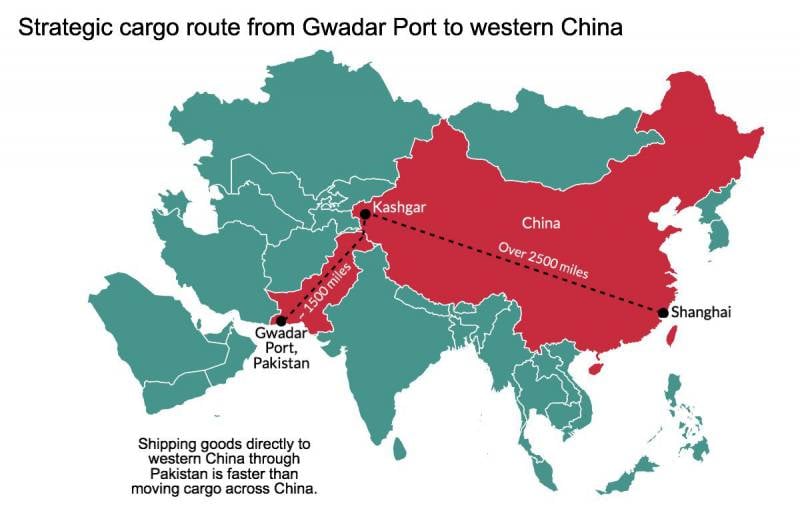 In conditions when the USA is increasingly competing with China both economically and politically, such a reorientation of Islamabad is the strongest irritating factor for Washington. Moreover, the Pakistani leaders, as if mocking, constantly emphasize that China is a true friend of Pakistan, unlike the United States, which “always betray”. Although a public demonstration of “special” Pakistani-Chinese relations can be viewed by Islamabad and as a way of putting pressure on the United States - they say, if you refuse to help us, we will cooperate even more closely with the PRC.

Recently, there has been a certain rapprochement between Pakistan and the Russian Federation. Thirty years ago, Pakistan was one of the main military-strategic opponents of the Soviet Union in Asia. With the direct involvement of the Pakistani army, the famous uprising in Badabera was suppressed, killing Soviet soldiers. Russia maintains close ties with India, and at one time, when Bangladesh was separated from Pakistan, the Soviet Union unreservedly supported the Bangladesh national liberation movement. However, now Pakistan and Russia are increasingly increasing the pace of not only economic cooperation, but also interaction in the sphere of defense and security. For example, Russia, despite the negative reaction from the traditional military partner - India, supplies certain types of weapons to Pakistan. The two states now have common interests in maintaining relative stability in the Central Asian region, including in Afghanistan. Of great interest to Russian companies are investments in the energy industry of Pakistan.

Thus, we see that, against the background of deteriorating relations with the United States, Pakistan is increasing the pace of cooperation with other real and potential allies, primarily with China, Iran and Russia. At the same time, many analysts say that the United States, no matter how criticized Donald Trump and his circle, is the policy of the modern Pakistani leadership, will never go to a complete rupture of relations with Islamabad. Pakistan plays an important role in ensuring a US military presence in the Middle East. It is through Pakistan that the supply of US military bases in Afghanistan is carried out, and without Islamabad this supply will be simply impossible. If the United States completely spoil relations with Pakistan, then the belt of Iran-Pakistan unfriendly to Washington will stretch out in the Middle East, which will greatly facilitate China’s task of promoting its political and economic interests.

There is one more very significant nuance. The modern Pakistani elite - both military-political, and, especially, economic - is very closely connected with the United States. Many Pakistani high-ranking officials and generals received education in the United States, their capital is also kept here, there is impressive real estate. They will not dare to completely break off relations with the United States - the Pakistani elite does not have that ideological and actual autonomy from “Americanism” that, for example, the Chinese elite has. In this, Pakistan is somewhat reminiscent of modern Russia, where much of the elite is also somehow connected with the West. Finally, in Pakistan there is currently no strong and charismatic leader who could lead the dramatic changes in the foreign policy of the Pakistani state.

Ctrl Enter
Noticed oshЫbku Highlight text and press. Ctrl + Enter
We are
Russia and Pakistan: what are the reasons for improving relations?Politics without emotion. How to Russia and Pakistan to forget the former "tension"
8 comments
Information
Dear reader, to leave comments on the publication, you must to register.