The most powerful small arms. part of 1. Desert Eagle Pistol

January 11 2018
56
Pistol Desert Eagle has not earned fame in the military service or in special units, but is rightfully one of the most famous pistols in the world. It can be safely called the legendary model of small weaponswhich gained fame among the masses. Popularization of the pistol was largely due to computer games, as well as various films in which it was often used because of its impressive size and frightening appearance.


The Desert Eagle Pistol (translated as “Desert Eagle”) is a self-loading pistol of large .50 caliber (12,7 mm, for a minute, this is the caliber of large-caliber machine guns). It was created in 1983 year and is the fruit of the joint work of the American company Magnum Research and the Israeli company Israel Military Industries, she also engaged in its production for a long time. The gun was initially positioned as a hunting weapon, as well as a weapon for self-defense against various wild animals and attacks from criminal elements.

The huge in size, angular pistol weighing up to two kilograms is recognizable all over the world and knowingly enjoys the reputation of super-weapon among pistols. This is largely due to a very powerful unitary cartridge - .50 Action Express (12,7x32,6 millimeter). This ammunition is considered one of the most "slaughter" pistol ammunition on the planet. The cartridge is distinguished by the presence of a 20-gram stupid-headed bullet with a truly huge stopping power. Of course, hunting with such a gun on a bear or other large forest dwellers is a rather dubious idea, but even when you meet with a large predator, you will have a chance to stay alive if you have a Desert Eagle gun on hand. 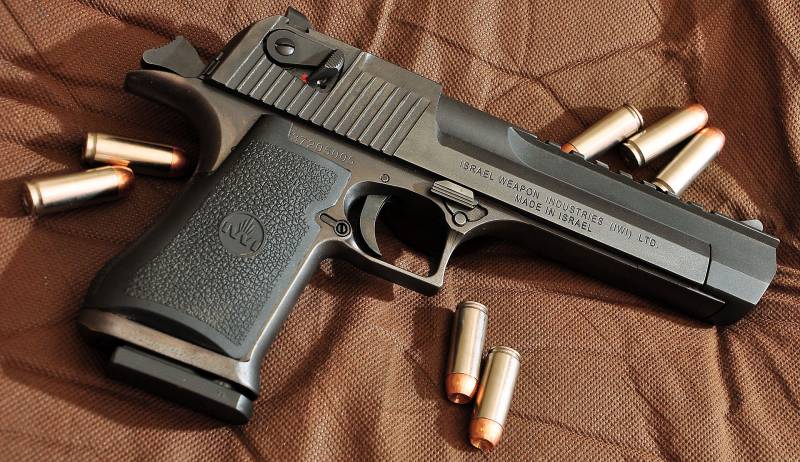 The original patent application for the new pistol was filed by Bernard S. White, an employee of the American company Magnum Research in January 1983. In the future, this patent served as the basis for the development of the gun Desert Eagle, the first working copy of which was released in the United States in the same year. After that, the gun passed the final revision in the Israeli company Israel Military Industries and in December 1985 received the second patent, which finally approved the characteristics and appearance of the weapon, which was put into serial production. The gun enjoys stable demand in the market despite its relatively high price, depending on the model and caliber it starts from around 1600 dollars, for example, the model “Desert Eagle, .357 Magnum, Black” will cost the US $ 1572 dollars.

Initially, mass production of the new pistol was deployed in Israel at the production facilities of Israel Military Industries, in 1995-2000 it was transferred to the Saco Defense plant in Maine, USA, but then returned to Israel in connection with the acquisition of Saco by General Dynamics. Since 2009, the gun in the United States has once again been manufactured by Magnum Research. Today, the gun is available in three main calibers: .357 (9 magazine capacity), .44 (8 magazine capacity), and .50 (7 magazine capacity).

The initial goal of the representatives of Magnum Research was to create a new, truly unique sporting and hunting autoloading pistol for one of the most powerful revolver cartridges at that time .357 Magnum (9х33 mm). The new pistol was supposed to compete with revolvers of the same caliber in sport shooting at long distance silhouettes and hunting. It is worth noting that in the US, hunting with “weapons of one hand” is quite popular — large revolvers that can be hung with various tactical accessories and optics. In this regard, a new hunting pistol for a powerful cartridge would be guaranteed to find its customers, so in the end it turned out. 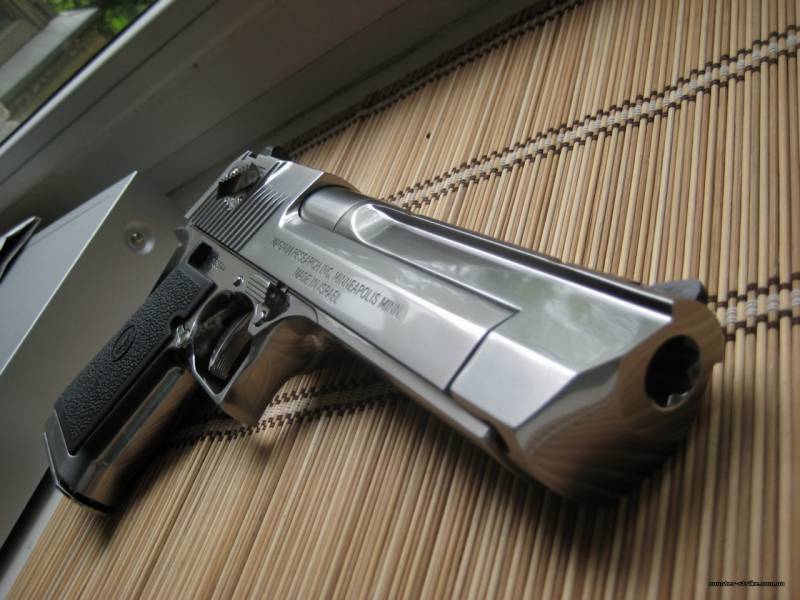 From a technical point of view, the Desert Eagle pistol was designed according to a scheme that is typical not for self-loading pistols, but for automatic rifles. In its automation, the designers used the principle of removal of powder gases for recharging. The vapor pipe is located under the barrel of the gun, and the powder gases are discharged directly to the bolt carrier. Locking is done by turning the shutter larvae. The shutter itself and the locking with the lugs (larvae) resembles the mechanism that was implemented in the famous American automatic rifle M16. The use of a similar system by the designers of the pistol was dictated, among other things, by the power of the cartridges used, which are superior to those commonly used in self-loading pistols. The use of the most powerful .50 Action Express cartridge (12,7 × 32,6 mm) made the Desert Eagle pistol competitive in those areas where only revolvers were previously dominant. Cartridge .50 Action Express was developed in 1988 year specifically for this model gun. The energy of his expansive bullet weighing 19 grams is 2200 joules.

The pistol has four bolt stops that engage with the breech breech. The gun uses a trigger type trigger, the fuse is mechanical, two-way, it blocks the shutter of the weapon. Desert Eagle sights are open, unregulated. The gun is equipped with single-row magazines, designed for 7-9 ammunition, depending on the caliber of the weapon.

When fired, the powder gases are discharged through a hole located in the immediate vicinity of the chamber, after which they are directed along the bore into the front part of the barrel to the short-stroke piston. Then the piston pushes back the massive bolt of the pistol, after which the cartridge case is extracted. The piston and venting tube of the Desert Eagle pistol in the barrel define the signature, recognizable, massive silhouette of a weapon. The brutality of the weapon and a sufficiently large size gives and a characteristic muzzle, having a triangular shape. The length of the gun is dictated by the relatively large stroke of the bolt carrier. 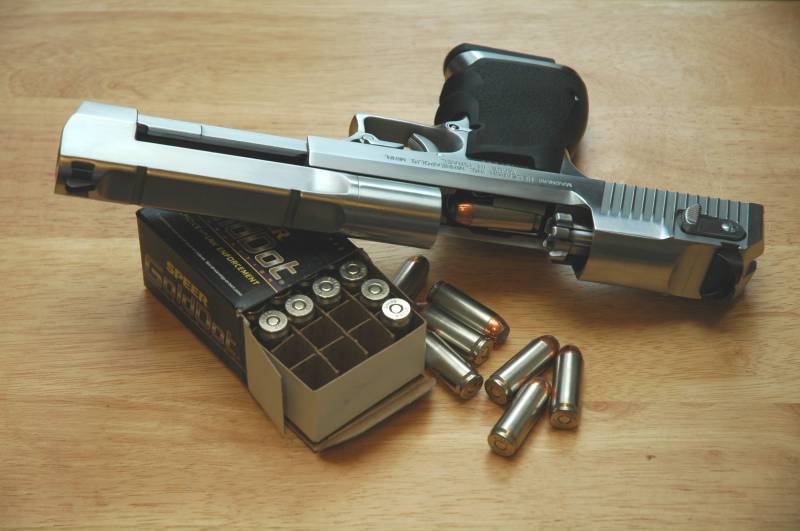 Since the start of mass production, several models of the Desert Eagle pistol have been created. Mark I and Mark VII models are already discontinued. The features of the Mark I model were a number of differences in the design of the gun (the location of the handle cheek, the fire switch). The Mark VII model was distinguished by the presence of the Weaver bar on the barrel, which made it possible to mount various additional accessories on the weapon: tactical lights, laser designators, and optical sights. Also, this model has an adjustable trigger. The guns of these models could use .357 Magnum and .44 Magnum cartridges. The most modern versions of the gun are produced exclusively on the basis of the Mark XIX model. It was created on the basis of the Mark VII pistol and is available today in three calibers .357 Magnum, .44 Magnum, and .50 Action Express, differing also in barrel length - 6 or 10 inches. In this case, the re-equipment of the pistol for the use of cartridges of another caliber can be made quite simply: to replace the barrel, magazine and bolt. You can perform these actions in the field.

The length of the “Desert Eagle” pistol even with the shortest 6-inch (152 mm) barrel is 27 centimeters. Such dimensions make the weapon extremely impractical in a city firefight, as well as inconvenient to carry in everyday life and an unprofitable option as a means of self-defense. In addition, the large size of the cartridges used with the pistol has led to the fact that its handle, in which a single-row magazine is placed, is very inconvenient for coverage. It is difficult for people with a small hand to even hold this weapon, not to mention firing from it.

Due to its large size, strong recoil, heavy weight, as well as its small magazine capacity, this gun was never considered by special services or the military as a suitable weapon. It is worth noting that the manufacturer has never positioned the Desert Eagle as an army or police weapon, always highlighting its hunting purpose. Moreover, the gun "Desert Eagle" has never been tested in difficult operating conditions, the weapon is considered to be very sensitive to care. All this did not prevent this pistol from earning the image of an ultimatum weapon, sometimes it is even called a “hand gun”, in many respects such an image is actively cultivated by computer games and the film industry. In any case, this is exactly the case when the caliber matters and the pistol is justly regarded as one of the most powerful representatives of small arms. Desert Eagle was originally designed to hunt large game and shooter protection from dangerous large animals, the .50 Action Express cartridge has a very strong stopping effect, and the manufacturer claims that the weapon can protect the owner even from a hippo. 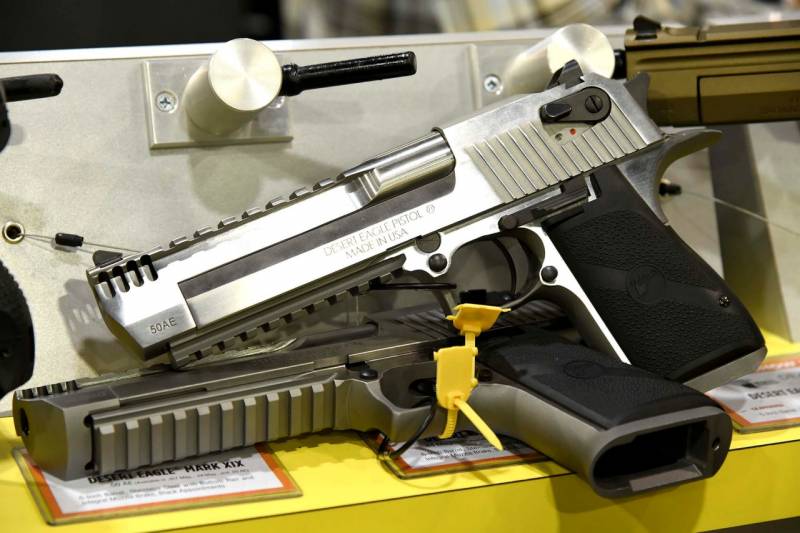 Because of the large weight, which can reach two kilograms, the gun is very difficult to properly hold. The high power of the cartridge leads to the firing of a very strong recoil, as well as a very loud sound of a shot. In fact, in confined spaces, shooting from this pistol using .50 Action Express ammunition can lead to injury to the hearing aid shooter, even if it uses special headphones. Therefore, .50AE cartridges are simply prohibited in many closed shooting galleries. When firing a pistol, a large tongue of flame arises, which is pulled out of the barrel, not equipped with a flame arrester. For this flash it is very easy to detect the position of the shooter, and at dusk the flash from his own shot temporarily blinds the shooter.

The recoil when firing from such a “hand gun” when using .50 ammunition of a caliber is great even when holding a weapon with two hands, although lower than that of other types of handguns of similar caliber. The recoil is lower due to the lower initial velocity and mass of the bullet, as well as due to the implemented mechanism of automation, which stretches the transmission of the recoil momentum of the shot to the arrow in time. When fired from right-handers, the gun goes to the left, for left-handers - to the right, which is typical of any firearm. But because of the very powerful .50AE cartridge size, this effect in the Desert Eagle pistol is most pronounced. Experts note that with insufficient grip or insufficiently strong muscles of the shooter, recoil when fired can lead to a blow to the face with a pistol.

We can definitely say that as a service weapon, the Desert Eagle loses almost any pistol. It is inconvenient to wear it, and it is not even covertly concealed. Strong recoil when firing causes the shooter to think more about how not to drop the pistol from his hands than about hitting the enemy hiding behind cover. Even a special power can also be attributed to the minuses in the service use, such a gun is simply not needed for firing "only" at people. Despite all its obvious flaws, the gun enjoys strong demand in the market, as evidenced by the huge number of modifications that are available to customers on official websites. 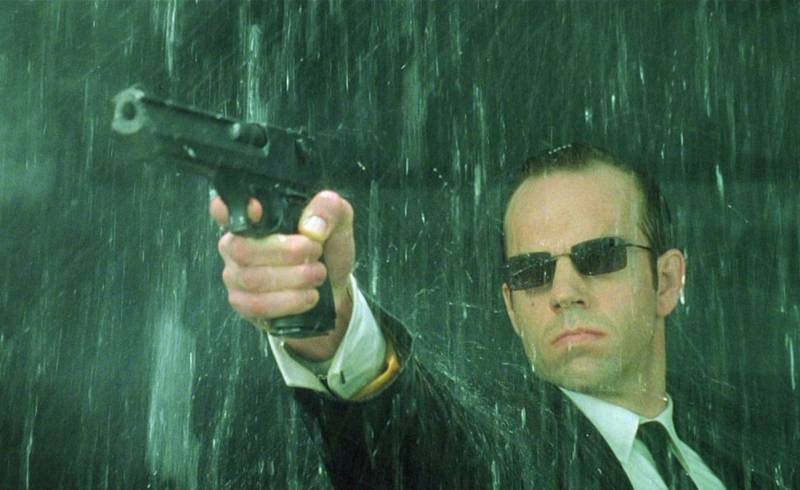 Perhaps, one of the main purposes of the pistol, besides sports shooting and hunting, was the film career, in which the weapon achieved really great success. The Magnum Research website even created a special section that can be called the official “portfolio”: it lists all the feature films in which the Desert Eagle had time to play.