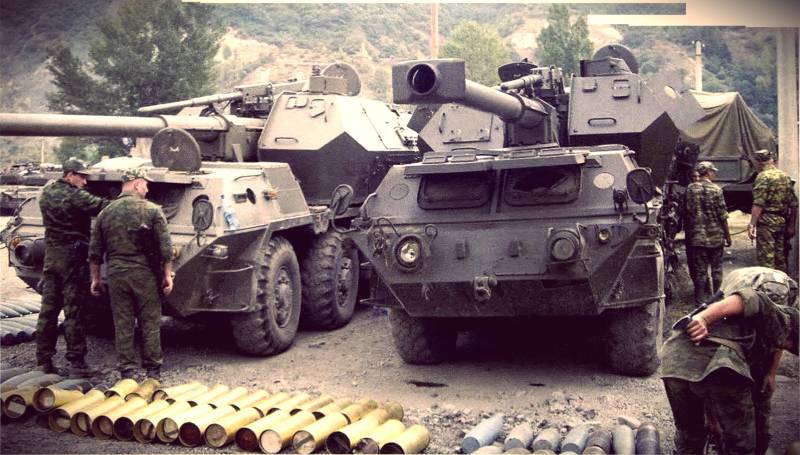 The probability of a sudden escalation of large-scale hostilities in the Donbass theater of operations in the coming 1-2 weeks continues to remain unusually high. First of all, this is evidenced by the third in the last week and a half a long reconnaissance flight of the strategic unmanned aerial vehicle RQ-4A "Global Hawk" in 35-45 km from the contact line, which allowed the US Air Force (and therefore the General Staff of the Armed Forces of Ukraine) to receive an extensive radar reconnaissance package , radio engineering and visual (optical-electronic / TV) information on the location of numerous artillery batteries of the buildings of the people's militia LDNR, as well as the majority of radio-contrast and radio-emitting units, Global Hawk radar and optical electronic devices.

Obviously, the patrolling flights in the lower layers of the stratosphere (1-7 km) made by 16 and 17 on January made it possible to get only the radar image of Donbass TVD using the AN / ZPY-2 MP-RTIP radar with synthesized aperture mode, because the use of the SYERS-2B / C high-resolution optoelectronic station was not favored by the meteorological situation (the Azov region and the Telman district covered in dense fog), but the radar image was not enough. By January 9, the cover cloud and fog dispersed over the Donbass and another “control” flight was performed to refine the data from the SYERS-2B / C optical module. This says only one thing: the US instructors and the command of the Armed Forces of Ukraine armed themselves with the necessary amount of tactical information to form an offensive strategy of “throws” on the Southern Front of the DPR, as well as distracting artillery strikes against the central densely populated agglomerations of the republics, where assault “kulaks” of the republican armies are concentrated.

Secondly, the rather successful implementation of the barbaric plans of the Armed Forces of Ukraine in relation to the Donetsk and Lugansk People’s Republics is observed in connection with the Washington-provided carte blanche to exacerbate the situation, which will become a real “saving wand” for the Trump administration after a loud operational and strategic failure in Syria . This is particularly true of the impossibility of controlling territories on the west bank of the Euphrates River (including Deir ez-Zor and Abu Kemal). But the most notable driving factor for Kiev, without a doubt, is approval by the US Congress and the Government of Canada, in December 2017, of military-technical assistance packages, providing for the supply of small-arms and various light weapons, including large-caliber 12,7 mm sniper rifles, Barrett M82A1, reactive anti-tank rocket launchers, etc. As for the sale of “independent” FGM-148 “Javelin” complexes, here there continues to wander extremely contradictory information, the generator of which is the Ukrainian media.

For example, 9 January 2017, the Ukrainian agency Ukrinform, citing the General Staff of the Armed Forces of Ukraine, reported that instead of the high-tech Javelin anti-tank missile systems, Ukrainian military formations would receive standard TOW-2A / B anti-tank systems. Nothing was reported about the exact modification, while the Americans are aware of several versions of the complex, the main ones are: the tandem TOW-2A (BGM-109E rocket), "TOW-2B" (BGM-71F) with radio command and control by wires and the possibility of striking a warhead of the "shock core" type into the upper projection of the enemy's unit or the "TOW-2B Aero RF" type with a millimeter radio Ka-band control channel instead of the wired one. And this radically impairs the tactical capabilities of the anti-tank forces of the Armed Forces of Ukraine, since the “shot and forget” mode is not implemented here. The operator of the complex must, throughout the entire flight trajectory of the BGM-71F (from the launcher to the target), hold the targeting marker on the target, which takes approximately 21 seconds.

As in the case of the "wired" version, and in the case of the radio command "TOW-2", the operator's position will be easily opened due to the relatively straightforward flight path with a smooth adjustment by the operator. At the same time, at the moment when the enemy uses the radio command version Aero RF, it will be much easier to calculate the location of the calculation by means of modern mobile electronic intelligence systems, because the control command transmitter antenna onboard the ATGM is installed in front of the TOW-2F Aero RF transport and launch container operating in the Ka-band (the operator automatically turns into a radio-emitting object).

The danger of the “TOW-2A / B” complexes falling into the hands of the Ukrainian junta is that the anti-tank guided missiles BGM-71E and BGM-71F-6 are equipped with a tandem cumulative warhead with a powerful basic cumulative charge, which can be used with a pattern, which can be used with a pattern, which can be used to be a good challenge. steel equivalent for dynamic protection. This is for us and the armies of Donetsk and Luhansk People’s Republics extremely unpleasant. news, since only a few main combat tanks hulls NM LDNR installed tandem explosive reactive armor "Knife" (on captured T-64BM "Bulat"). Most of the vehicles (T-64BV, T-72A / AV / B in the amount of 600 - 800 units) are equipped with sets of mounted DZ "Contact-1" (elements DZ 4S20) and complexes of built-in DZ "Contact-5" (EDZ 4S22). Despite their excellent ability to reduce the penetrating effect of conventional monoblock cumulative projectiles (about 80%), the level of resistance to tandem ATGMs in both "Contacts" is minimal, while the equivalent durability of even the most protected frontal armor plates in the above tanks without DZ barely reaches 490- 620 mm (1,2 - 1,7 times less than the penetration of the main charge of the BGM-71E ATGM). Here is such an unpleasant situation!

Moreover, getting rid of the coils of the “microwire” control system, the BGM-71F-3-RF / F-6 anti-tank missile, which is considerably lighter, has the ability to accelerate to supersonic speed, as well as defeat 1,2 times more distant objects (4500 m against 3750 m early modifications). All this forces to take appropriate responses. In particular, the tank brigades of the people's corps of the LDNR People’s Militia are in dire need of equipping their vehicles with advanced “Relict” dynamic protection complexes, which are able to effectively protect against modern shtatovskih or western European ATGM.

As for the Javelins, the 49-million contract for the delivery of which was submitted to the US Congress and the Trump administration directly, here it was decided to replace them with the TOW-2A / B / F ATGM only at the official level, while as Washington has a huge “maneuver” field, using Canada as a transshipment point, whose management ultimately approved the delivery of Canadian weapons to Kiev as part of intra block sales. As we clarified in our previous work, Ottawa has no military-political link to the “Norman format”, and also has absolutely no obligations to the “Minsk-2”. As a result, under the cover of allegedly “light weapons” deliveries, all types of American-made weapons (from FGM-148 to adjustable artillery shells and mortar shells) can be shipped through Canada.

The official response of Moscow, Donetsk and Luhansk to Ottawa’s decision was fairly standard and “dry”: Canada was accused of participating in the conflict in the Donbas and opening a Pandora’s box, which automatically aggravates the situation and internationalizes the conflict; about this, December 26 2017, said Deputy Foreign Minister of Russia Grigory Karasin. A more interesting reaction, which can be interpreted as an unequivocal warning, was reflected in the opinion voiced by the Ukrainian video blogger Alexander Medina of the international brigade “Pyatnashka” Ahra Avidzboy (“Abkhaz”). First, the commander of the brigade, distinguished in the battles for the DAP and Ilovaisk, rightly noted the rather “soft-bodied” (at least, not sufficiently rigid) position of Russia on outside aggression.

Secondly, and most importantly, he said that the deliveries of the same “Javelins” would be an excellent argument for South Ossetia and the homeland of Ahra - Abkhazia to begin full-fledged military-technical support for the NM regiments of the republics. Ahra also pointed out the possibility of transit through a “corridor” organized by Russia from the friendly republics of captured weapons seized during the Georgian-South Ossetian conflict in August 2008. As you understand, such statements from the kombriga “Abkhaz” would hardly have been heard without approval from above, and this says a lot. After all, both South Ossetia and Abkhazia, as well as Canada, do not participate in any pseudo-world “formats” and do not plan to report to anyone, especially since the “Canadian precedent” with the direct support of the criminal Ukrainian regime unleashes Moscow. This “mirror response” to military-political mayhem, which the “Square” is repairing under the auspices of the values ​​of the Western world, is a very long-awaited moment for the entire Russian population of Donbass, which has been suffering for more than three years from the actions of VSUshniki and do-it-yourself subordinates to the Interior Ministry and other Ukrainian security forces departments.

As for the trophies taken from the Georgian army in 2008, there are at least 150 units of armored vehicles and artillery alone, the most notable of which are the 5 203-mm self-propelled guns 2S7 “Peony”, 15 T-72SIM-1 (modernized by the Israeli company “Elbit Systems” T-72M1 received from the Czech Republic; the vehicles received an advanced multi-band radio station with frequency hopping “Falcon” from “HARRIS Corporation”, also having a scrambling and messaging mode), 4 155 mm self-propelled guns “Dana” of Czech production, as well as more than 15 amphibious composite speedboats Blac k Shark "and" See Doo Speedster ", which may come in handy for updating the special forces unit" Typhoon ", which is part of the Azov flotilla Donetsk People's Republic. However, the work in the above areas is very serious, because it is not by chance that official diplomatic and economic relations have been established with the South Ossetia today in the DPR, and it is no accident that Anatoly Bibilov arrived in the Donbass on a working visit just before the impending escalation of the conflict.

Ctrl Enter
Noticed oshЫbku Highlight text and press. Ctrl + Enter
We are
The escalation path in the Novorossia theater is back in force. Memo to counter Ukrainian T-80BVChronology of "Minsk 2.0": the Armed Forces of Ukraine are preparing a "breakthrough" (part of 2)
97 comments
Information
Dear reader, to leave comments on the publication, you must to register.