On the introduction of like-mindedness in Europe

January 12 2018
23
In Europe, began to fight with the "Russian propaganda" and "subversive activities." This “struggle” began in America with the announcement of the “foreign agent” of the RT channel and quickly reached Europe. In America, unanimity in society has long been introduced, so the arrival of Donald Trump in the Oval Office of the White House with accusations of CNN's "fake news" was perceived as an attempt on the foundations of society. And Moscow RT fell under the distribution. TV presenter Brzezinska (the daughter of the deceased Zbigniew) said live: “Controlling people's thoughts is our job, not Trump.” Admittedly, in America, with the exception of President Donald Trump, the foundations of like-mindedness are still strong. 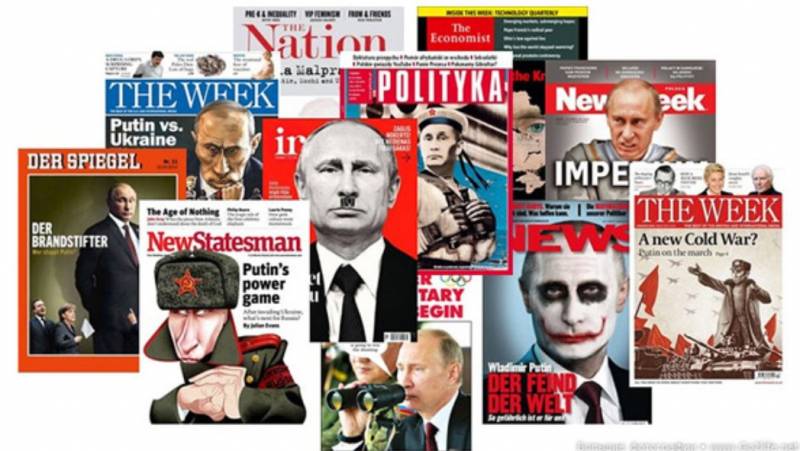 But in Europe with a single-mindedness of the problem, therefore, with the suggestion of Americans in Europe, too, a campaign began to introduce like-mindedness, whose beneficialness was predicted long ago by our Chrysostom Kozma Prutkov, who turned out to be relevant even in the 21st century! The fact is that RT and the Russian press, which are much closer to Europe, cover world events from the wrong point of view. We should state the correct, pro-American point of view, even on the events in Russia, and they state their point of view, which is already therefore “wrong” and “propaganda.” It “brings confusion into European minds”, the European public is indignant, which stands for the decisive introduction of like-mindedness in Europe.

“The word inflicts wounds deeper than the saber,” wrote the words master N. V. Gogol. Freedom of speech is also a saber, about which we hesitate to say so far, listening to the sweet lies about the “freedom of speech” of Western Zlatoust. As long as the West had an advantage in the possession of this saber, he was for her complete freedom. When Russia learned to fence this sword, the West immediately threw away the lies about its freedom, and remembered information security, and the benefit of like-mindedness for European inhabitants.

In England, a department is being set up to combat “Russian propaganda”, in Spain, France and Germany they express great concern about the interference of “Russian hackers” and, again, “Russian propaganda”, not to mention European “democracies” -limits. We can say, of course, that this is a manifestation of the information war, and this is true. However, why does it acquire such grotesque forms, why does the United States associate any deterioration in its position in the world with “subversive activities”, this time with “subversive propaganda activities” of Russia in Europe?

The US is losing Europe, Donald Trump calls the main European country, Germany, “very bad,” but “Russian propaganda” is to blame. The US has less and less economic and political leverage to influence the situation in Europe, which is why they are so concerned about the introduction of the right like-mindedness in Europe as the last way to resist Russia's pernicious influence on weak European minds. And not only.

The United States is concerned about the plans of the German reformers who intend to create the United States of Europe and dream of a European army. According to German Foreign Minister Sigmar Gabriel, fermentation and dissatisfaction with the “instability” emanating from the United States clearly began in the German elites. Chancellor Angela Merkel calls on Europe to rely on its own strength, and this is impossible without relations with Russia, even if it continues to supply pipe gas.

German politicians of the second row are more outspoken, this is what Wolfgang Ischinger, head of the Munich Security Conference, says: “In the European Union, they continue to believe that even the smallest in this kindergarten has veto power.” The initiative of Martin Schulz, the leader of the SPD and the former President of the European Parliament to create the USE, is clearly not his personal initiative, but of the German elites.

In this situation, the Atlantic elites are hoping to keep Europe under the heel of the United States with the help of the propaganda unanimity of the European media, on which they have a great influence. And first of all, it is necessary to break the gas relations of Germany with Russia with the help of the “right thought”, then the slogan of USE under the auspices of Germany turns into utopia.

The instinct of economic self-preservation in Germany today is struggling with its Atlantic solidarity. Who will win: USA or USA? Apparently, Chancellor Merkel, EC head Jean-Claude Juncker, Martin Schulz, of course, “Putin’s friend” Gerhard Schroeder, and those behind them, speak in favor of the United States and against the United States. Germany and the “old Europe” do not like the fact that Young Europeans from Eastern Europe are economically connected to the European Union and politically under the protectorate of the United States. The USE project should, in theory, eliminate this ambiguity, making Europe a more independent global player: the Young Europeans will have to make a choice between the USE and the US. Russia seems to support this project.

In fact, the United States is fighting today with Russia for Europe, and this is pushing Russia toward a rapprochement with China. Theoretically, the rapprochement between Russia and China is a nightmare for the United States, according to the doctrine of Henry Kissinger, but now Washington is not up to theories: it needs to keep Europe in its zone of domination. Therefore, the atlantists are trying to introduce in the European Union the correct consensus and, just in case, cut it off from Russia by the war in Ukraine.

As a result, the United States and the West as a whole will apparently “lose” Putin’s Russia, it will go toward rapprochement with China and with the East in general. Vladimir Putin has not yet abandoned the so-called “European home from Vladivostok to Lisbon,” but the “window of opportunity” for him is rapidly closing. Russia goes to the East, which has one important advantage for it: they don’t climb into the soul, do not demand like-mindedness, there are no annoying “friends”, and Russia will be able to defend itself from its enemies.

Ctrl Enter
Noticed oshЫbku Highlight text and press. Ctrl + Enter
We are
Still, Trump "our agent"!Zlatoust at the American Embassy. Masterpieces of Russian espionage
23 comments
Information
Dear reader, to leave comments on the publication, you must to register.